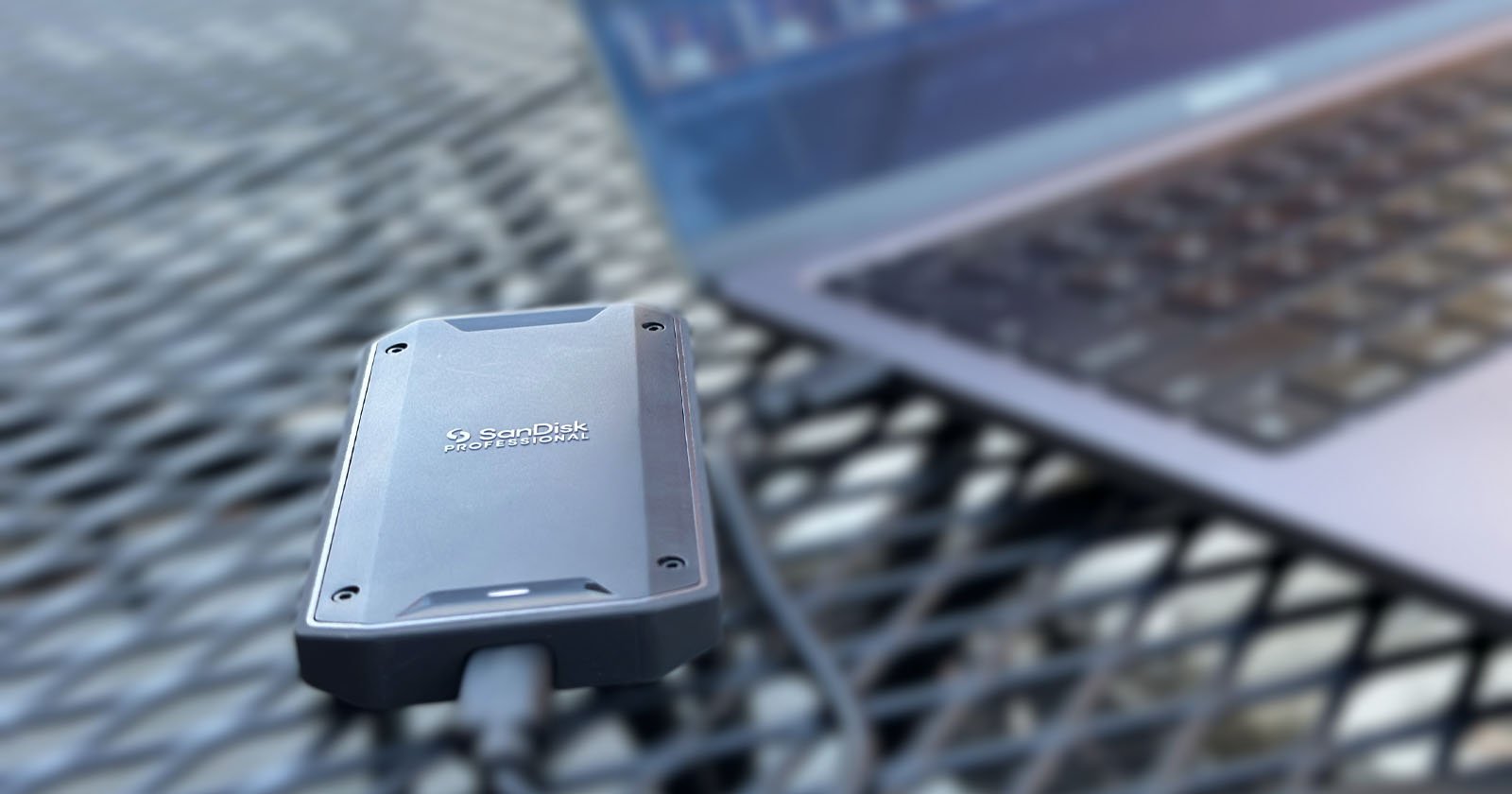 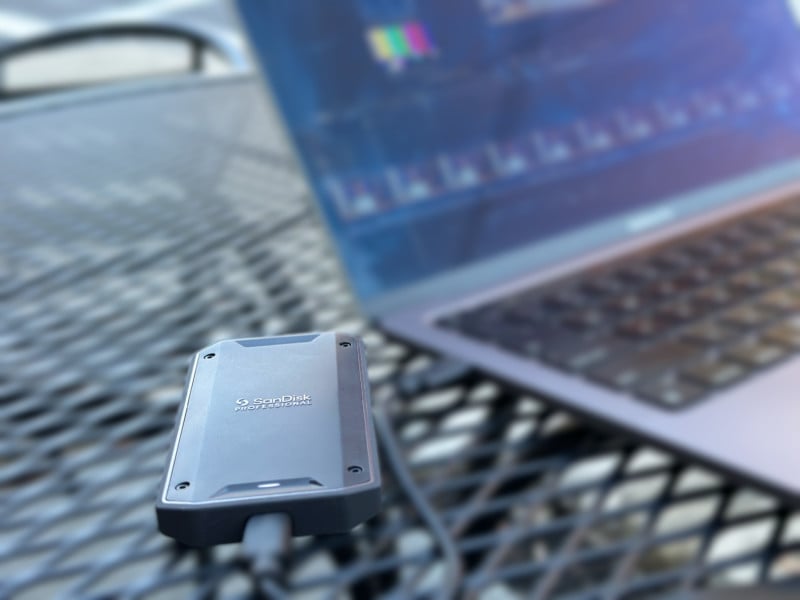 Working on videos for my YouTube channel, I’ve been finding that even the SSDs I own aren’t able to keep up with the transfer speeds needed for live editing of 10-bit 4K video. As I test things for PetaPixel, like the super-high resolution cameras with 6K and higher footage capabilities that using the fastest drives possible becomes increasingly important.

Full Disclosure: This story is brought to you by SanDisk.

Photographers and other creatives continue toward a hybrid photo-video workflow driven by client demands and the increasing popularity of YouTube and other video-centric platforms. Hard drives already straining under loads of RAW files are now bursting at the seams with 4K (or higher) video.

The solution to an overflowing drive is simply to get more drives. Photographers often turn to RAIDs and network storage devices (NAS) to house an ever-growing collection of images. Still, you can get away with buying external drives on sale and creating your redundant backup.

For photographers, the speed of a drive is often secondary to the drive’s storage capacity, so a large, redundant RAID is more important than a fast one. Even photographers on a tight budget can pick up inexpensive drives and use them to back up older images. 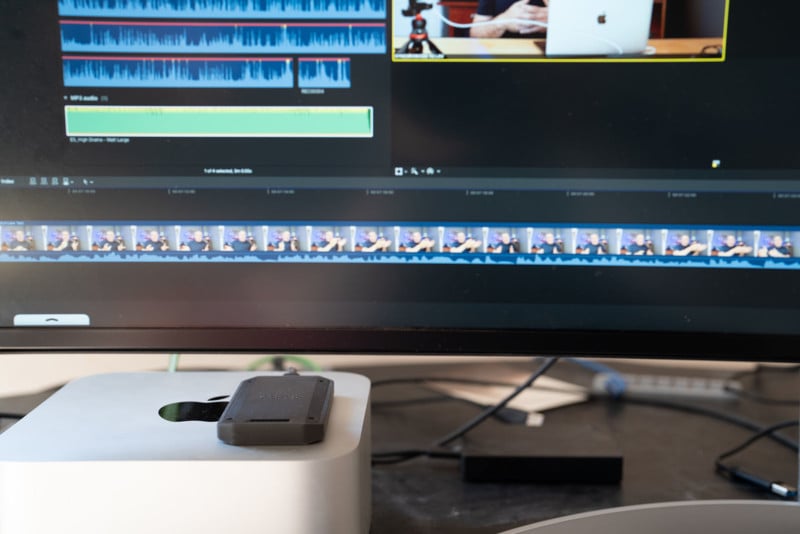 But in contrast, for video editing, a drive’s speed is at least as important as the drive’s capacity and is often more critical. A finished project can be archived on a slow drive, no matter the speed – all you need is storage space to back up your older images.

But to work with 4K, 6K, or 8K video, drive speed becomes paramount, and very quickly, traditional hard drives stop being able to keep up with the transfer speeds needed to edit high-resolution video. Even small 4K projects can fill up a drive, and the speeds of most hard drives used by pro photographers and even consumer-grade SSDs is too slow for video editing.

My recent review of a drone involved a large amount of 4K and 5.2K footage, plus lots of 4K A-Roll, took up 800GB. Much of this is temporary render files that can be purged when the project is done, but having these render files on a high-performance drive is key to speedy editing.

This is why super-fast, high-capacity drives are the key to video editing and working with high-resolution RAW files as well.

Many video creators are working remotely thanks to the power of today’s laptops, but the constant jostling inherent in travel is terrible for traditional hard drives. Drop a traditional hard drive just a few inches, and you can kiss your content goodbye. Even if you drop most SSDs from a height of just a few feet, the drive could be damaged, and your data is gone.

On a remote shoot in Joshua Tree, for example, I dropped a so-called rugged SSD off a coffee table and lost a day’s worth of footage I’d just captured. You can’t re-shoot a sunset. 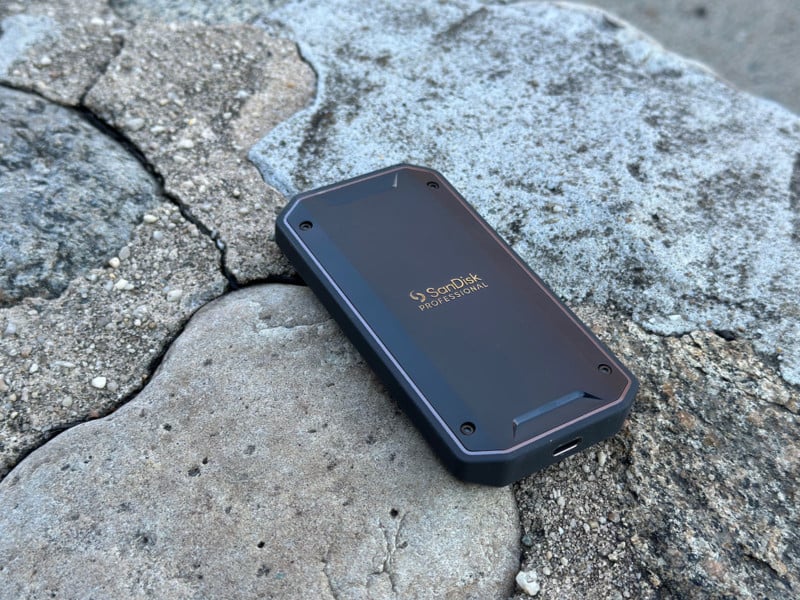 The claimed sustained data transfer rate on the drive is up to 2,700MB/s read and 1,900MB/s write speeds.3 3GB/second (3,000 MB/sec) is the maximum speed of Thunderbolt 3, so the SanDisk Professional PRO-G40 operates at the top of the standard’s performance. 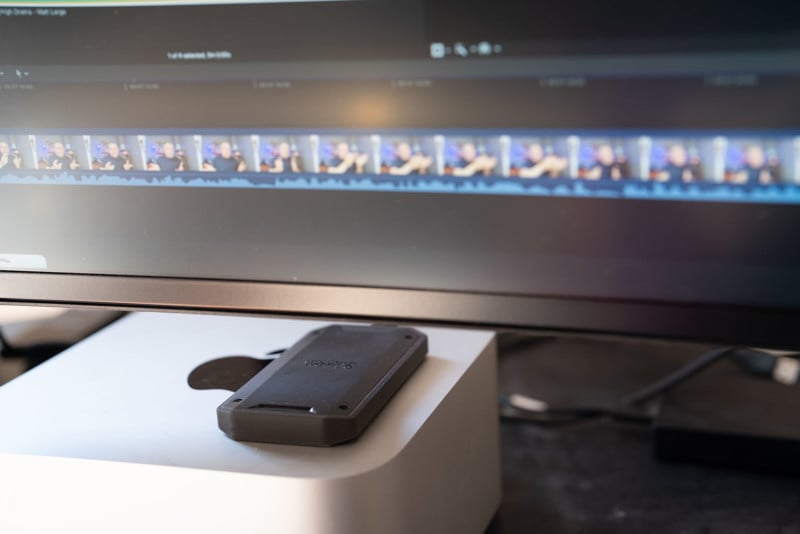 In PetaPixel’s testing, we found this drive exceeds those expectations. Speed tests show that the drive can reach up to 2,756.3 MB/s read and 2,582.3 MB/s write speeds, both of which crush the promises SanDisk Professional puts on the box. We also found that the drive did not fall below 875 MB/s transfer speeds at any point during the test, and only got that low at the very beginning of a test as it ramps up to an average of 1,975 MB/s transfer speeds.

Footage captured at 4K 4:2:2 Pro Res takes about 150 MB/s to edit in real-time; double that for a multi-cam shoot. Some RAW video footage like that from Sony’s cameras takes a throughput of 360 MB/s to edit.

The fastest of my traditional hard drives runs at about 100 MB/second, and my fastest consumer-grade SSD runs at around 500 MB/second. The speeds it is capable, the PRO-G40 has more than enough bandwidth to tackle even multicam 4K RAW footage without needing to render proxy files.

The 2TB1 size is perfect for my video creation. The PRO-G40 is big enough to hold several projects along with the massive render files they create. RAW 4K footage takes 100GB or more per hour of footage. The 1TB1 will still hold hours of footage without bursting at the seams.

I’m not giving up my high-capacity RAID arrays for offline video storage or for backups of my massive catalogs of images any time soon. At the end of every day my footage backs up to a slower-speed SSD, and then every week it backs up to one of my large RAIDs. 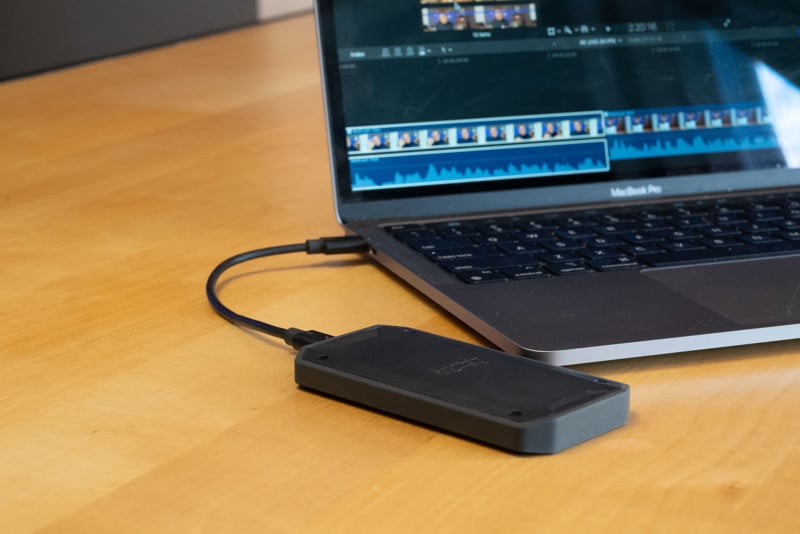 But the boost in performance of moving my real-time editing to a fast SSD has changed my workflow. No more proxy file creation means I can get to work faster, and the massive throughput means I can keep working without interruption.

The SanDisk Professional PRO-G40 provides both performance and durability at the same time. At around $450 for the 1TB1 version it’s the same price as some similar rugged drives, but with much faster performance. Editing 4K 4:2:2 footage in a coffee shop without worrying about dropping my drive on the floor and running a day’s footage is well worth the price. The hours I save in editing and rendering make it one of the best tools in my video editing arsenal.

Full Disclosure: This story is brought to you by SanDisk.

1. 1TB = 1 trillion bytes. Actual user capacity may be less depending on operating environment.*
2. On a carpeted concrete floor.
3. Based on stated speeds. 1 MB/s = 1 million bytes per second. Based on internal testing; performance may vary depending upon host device, usage conditions, drive capacity, and other factors.

Photography News: Canon Lens Rumors, Tycho Crater Up Close
The Power Junkie v2 Can Power Three Devices from One Sony Battery
Can You Find the X? Photographer’s Gigapixel Images Contain Hidden Code
🦸 Apply a Comic Book Drawing Effect To Your Photos in Photoshop!
The Sword-Billed Hummingbird: A Knight of the Andes