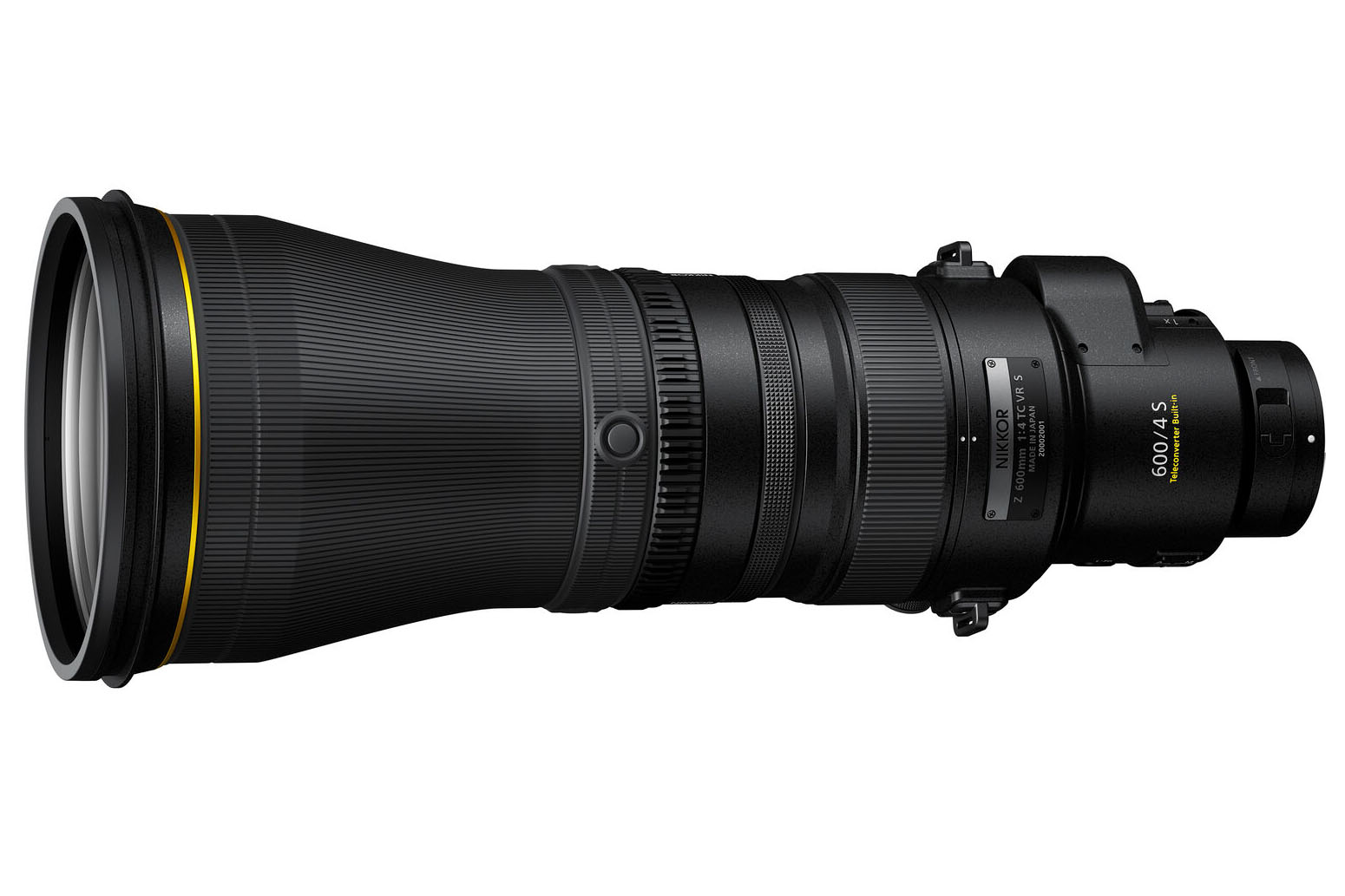 It was a popular day for photography announcements! Alongside Fuji’s X-T5 and Canon’s EOS R6 Mark II, Nikon officially announced a lens that’s been on their roadmap for a while: the Nikon Z 600mm f/4 TC VR S. As many photographers expected, it’s an f/4 lens and has a built-in 1.4x teleconverter (to make an 840mm f/5.6). It’s also expensive – a whopping $15,500, making it the priciest Nikon Z lens yet. 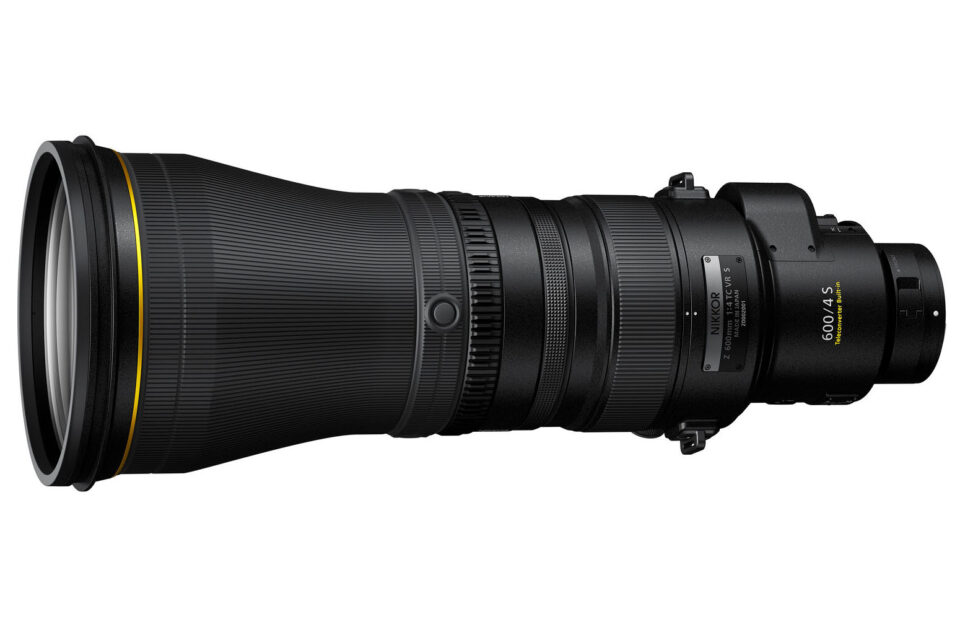 Even with the built-in teleconverter, the lens weighs 550 grams / 1.2 pounds less than its predecessor, the Nikon AF-S 600mm f/4E FL VR for DSLRs. Specifically, the new Z lens is 3260 grams, or 7.2 pounds. That’s hardly featherweight, but it’s on the lighter side for a lens like this; it should be possible to handhold the Z 600mm f/4 for short periods of time. (Nikon says the lens’s center of gravity is at the tripod ring, which also helps.)

That’s a whopper of a specifications list – eight special lens elements (out of 26), tons of buttons and rings, and, of course, the built-in 1.4x teleconverter.

It’s the last point that makes this lens so interesting for professional photographers. Like the Nikon Z 400mm f/2.8 TC VR S – which shares a lot of similarities with this lens – all it takes is one switch to enable or disable the 1.4x teleconverter. It doesn’t quite make this as flexible as a zoom lens, but it still acts like two lenses in one. The ability to jump quickly between 600mm f/4 and 840mm f/5.6 will be useful in fast-moving situations.

No surprise, the MTF charts look almost perfect for this lens. You can see the lens’s standard performance and the performance with the 1.4x teleconverter below:

Nikon says the lens will be available in late November, but if the other Nikon Z supertelephotos are anything to judge by, it will be many months until most photographers get their copy – even those who pre-order the lens.

Still, you can pre-order at the link below:

And here’s Nikon’s press release for the lens:

TOKYO – Nikon Corporation (Nikon) is pleased to announce the release of the NIKKOR Z 600mm f/4 TC VR S, a fast, super-telephoto prime lens that is compatible with full-frame/FX-format mirrorless cameras for which the Nikon Z mount system has been adopted.

The NIKKOR Z 600mm f/4 TC VR S, the super-telephoto prime lens which belongs to the S-Line*1 of NIKKOR Z lenses, pursues the ultimate in optical performance. It features a built-in teleconverter that extends the focal length by 1.4x, enabling coverage of two focal lengths — 600 mm and 840 mm. With a weight of approximately 3,260 g, it is roughly 550 g lighter than the AF-S NIKKOR 600mm f/4E FL ED VR, even with the addition of a built-in teleconverter. With a total length of approximately 437 mm, the lens is small enough to be stored in a bag that meets carry-on standards for international flights. Various aberrations are effectively compensated with the adoption of three ED glass*2, a super ED glass, two fluorite lens, and two SR lens*2 elements for the lens optics. Superior sharpness and detail are possible even at the periphery of the frame from the maximum aperture, and outstanding image quality is realized even when the built-in teleconverter is used. A fast maximum aperture of f/4 makes the lens ideal for photographing rapidly moving subjects, such as at motorcycle racing events, as well as for three-dimensional rendering with natural bokeh.

In addition, the lens employs Meso Amorphous Coat that boasts the highest anti-reflection performance in NIKKOR history. The combination of Meso Amorphous Coat and Nano Crystal Coat synergistically works to greatly reduce ghost and flare. This allows users to concentrate on shooting without restrictions on composition, even in situations where strong light sources are likely to be included in the frame, such as outdoors or under stadium lights. Further, the Silky Swift VCM (SSVCM)*3 has been adopted for the lens AF drive to simultaneously achieve fast and highly accurate AF control, as well as outstandingly quiet AF operation. The lens also supports VR performance equivalent to a 5.0-stop*4 increase in shutter speed, effectively reducing blur with super-telephoto shooting. With its superb strength, durability, and operability, the NIKKOR Z 600mm f/4 TC VR S supports professional photographers’ imaging expression in photographic genres such as sports, news, and wildlife.

Nikon will continue to pursue a new dimension in optical performance while meeting users’ needs, contributing to the development of imaging culture, with the hope of expanding possibilities for imaging expression.

1Depending upon the subject, scene brightness, and focus position, AF may not perform as expected, regardless of the camera used, resulting in inaccurate focus, slow focusing, or flashing of the focus indicator for electronic rangefinding.

3Based on CIPA standard. This value is achieved when attached to a camera with full-frame/FX-format sensor, with the camera’s VR function set to “NORMAL”, and the built-in teleconverter disabled.

4Thorough dust- and drip-resistance is not guaranteed in all situations or under all conditions.