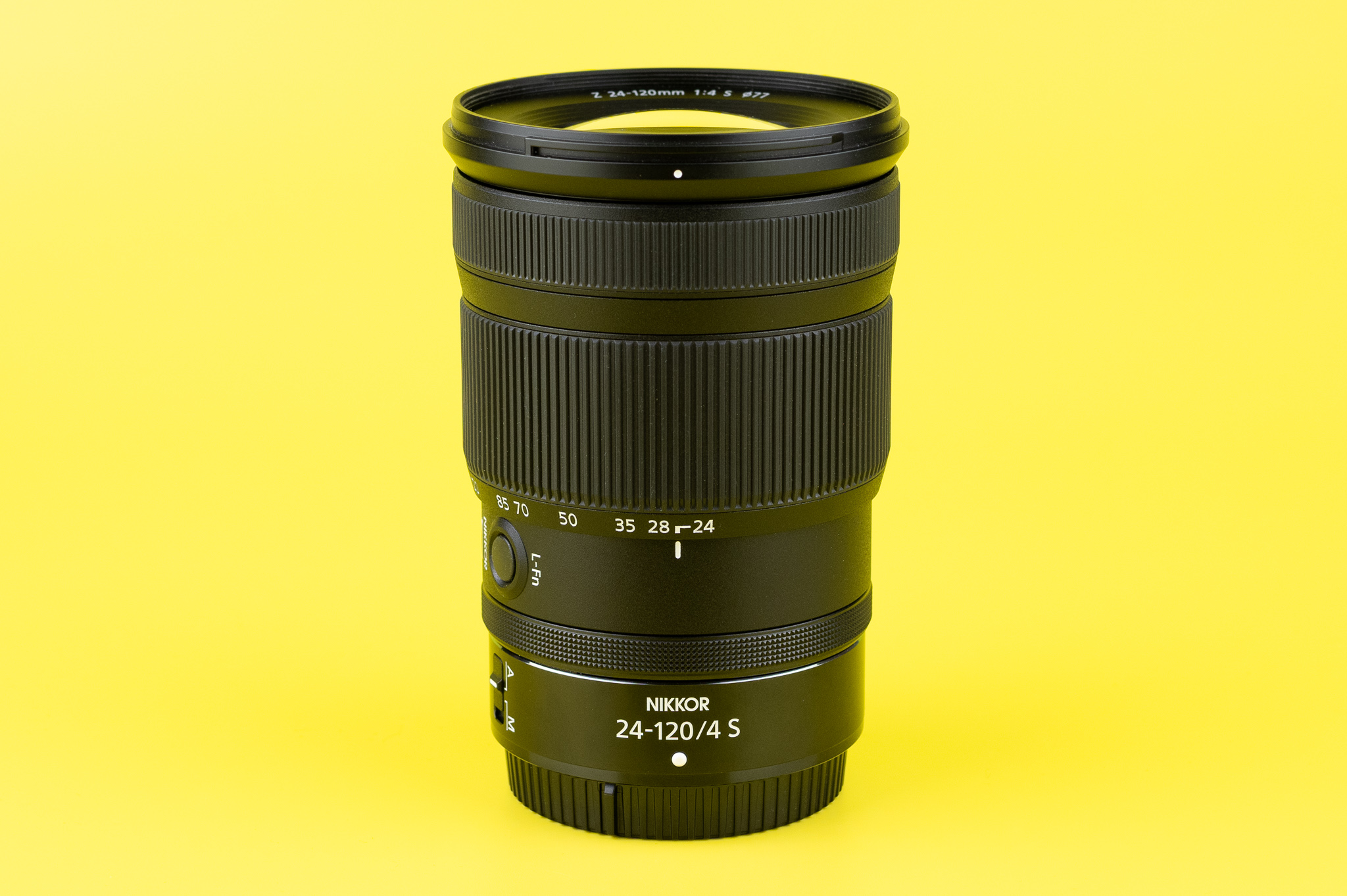 The Nikon Z 24-120mm f/4 S has been one of the most highly anticipated Nikon mirrorless lenses yet – but it almost didn’t exist. In early versions of the Nikon Z roadmap, a 24-105mm was shown instead. Thankfully, Nikon scrapped that plan and eventually went with the 24-120mm design we have today.

Why thankfully? Because with the Z 24-120mm f/4 S, Nikon has made one of the best all-around midrange zooms that I’ve ever tested. It doesn’t quite reach the lofty heights of the Nikon Z 24-70mm f/2.8 S, which still sets the optical standard for midrange zooms. It’s also a bit heavier and more expensive than some alternatives. Yet the 24-120mm f/4 S balances these tradeoffs, and more, extremely well. It has very good performance, impressive reach, and a reasonable price and weight. It’s close to the target for what a modern midrange zoom should be.

I’m getting ahead of myself, though. If you’re mainly interested in the optical performance of the Nikon Z 24-120mm f/4 S, you can jump ahead to pages 2 and 3 of this review. There, I’ve done detailed lab and field tests of the lens’s sharpness and other optical qualities, plus head-to-head comparisons against its leading competitors.

Before that, let’s dive into the feature set and specifications of the Nikon Z 24-120mm f/4 S. As expected of an S-Line lens, the 24-120mm f/4 S has plenty of impressive features. However, it’s not perfect.

For the most part, these are some very high-end specs. The coatings and special lens elements in particular are a signature of Nikon’s top optics. It has a whopping 7 special elements out of 16 total, meaning that almost half the elements are aspherical, ED glass, or both.

Another noteworthy specification of the 24-120mm f/4 S is the maximum magnification of 0.39x. That’s very high for anything other than a dedicated macro lens; it means you can fill the frame with a subject that’s just 3.6 inches / 92 mm across (assuming a full-frame camera).

The biggest issue with the Z 24-120mm f/4 S’s specifications is that it lacks vibration reduction. That’s not an issue so long as your camera body has IBIS. But practically speaking, it makes the 24-120mm f/4 S a questionable choice for any Nikon Z cameras without IBIS, such as the Z30, Z50, and Zfc.

That’s a shame, because I could see Nikon DX users picking this lens as part of an eventual FX upgrade path, probably paired with the 14-30mm f/4 S. Instead, I’m left recommending the Nikon Z 24-200mm f/4-6.3 VR to such photographers, since it at least has vibration reduction. (The 24-200mm VR isn’t a bad lens, as you can see in our review, but narrow-aperture superzooms aren’t for everyone.)

Nikon kept down the Z 24-120mm f/4 S’s weight pretty well, even though it’s not the lightest zoom in their lineup. What matters is usability, though, and I don’t mind keeping this lens glued to my camera all day. In particular, it’s not too much heavier than the Z 24-70mm f/4 S or the Z 24-200mm f/4-6.3 VR. (That said, it’s noticeably wider and more bulbous than both.)

From lightest to heaviest, here are various midrange zooms for Nikon Z and other systems, to see the 24-120mm f/4 S in context:

Despite some lighter options in the Nikon Z lineup, this is a good showing for the 24-120mm f/4 S. Importantly, this lens weighs less than its F-mount predecessor. A photographer switching from, say, a Nikon D750 + 24-120mm f/4G to a combination like the Z6 II + Z 24-120mm f/4 S can expect to save about half a pound / 215 grams, while getting better performance overall. (More on the lens’s performance on the next page of this review.)

Probably less relevant to real-world photography – although more relevant to online flame wars – is that the 24-120mm f/4 S is lighter than Sony’s and Canon’s similar lenses. Nikon managed this despite zooming to 120mm where the Sony and Canon stop at 105mm. However, the Nikon Z 24-120mm f/4 S does not have image stabilization, while the other two lenses do, which accounts for some of the difference.

In order to keep the weight down somewhat, Nikon designed the Z 24-120mm f/4 S with primarily plastic externals, aside from the control ring and the closest portion of the barrel to the camera. This is standard fare for Nikon Z lenses. If you’re averse to plastic construction, you don’t have many options on today’s market anyway; plastic has clearly overtaken metal as the material of choice for lens companies, even on high-end optics like Nikon’s S line.

That said, I’m partial to plastic construction anyway. It saves weight compared to metal, doesn’t get as cold in chilly conditions, and (depending on the lens) can be more durable/resistant to dents and dings over time. The Z 24-120mm f/4 S’s plastic feels reassuring in-hand and didn’t scratch easily during my months with the lens.

As for the rest of the lens’s build quality, the biggest issue is that the Z 24-120mm f/4 S has a dual telescoping lens barrel. As you zoom in, the lens extends substantially:

It’s not a surprising design for this type of lens, but even so, a dual telescoping barrel (as opposed to just one extending barrel, or an internal zoom) can be weaker in the long run. If it suffers a hard bump or a small drop when the barrel is extended, the 24-120mm f/4 S stands a higher risk of decentering compared to some lenses. I always make sure to zoom it back to 24mm when traveling.

The good news is that the dual telescoping barrel on the Z 24-120mm f/4 S seems built to tight tolerances. I don’t notice any wobble at 120mm, even when I try to wiggle it around. That’s far from a given on lenses like this.

Nikon says the Z 24-120mm f/4 S is sealed against dust and moisture, but even so, I’m always careful to wipe down the telescoping barrel when I use this lens in harsh conditions, before zooming back to 24mm. I used it in a couple of rainstorms without issue, so the weather sealing clearly works – but there’s still some risk compared to an internal zoom or prime lens.

The Nikon Z 24-120mm f/4 S handles as expected, with the usual button layout and features for a relatively high-end Nikon S-series zoom. While there isn’t an illuminated display or focus limiter switch, there is a single “L-Fn” function button on the left-hand side. There are also three separate rings on this lens – focus, zoom, and control – which is more than on some Nikon Z zooms, like the 24-70mm f/4 S.

To me, the biggest handling issue with the 24-120mm f/4 S is Nikon’s inconsistency with the position of the rings on their mirrorless lenses in general. In the DSLR days, almost every Nikon lens had the zoom ring near the camera body and the focus ring near the end of the lens. Now, it’s a free-for-all. If you pair this lens with the 14-30mm f/4 S and 100-400mm f/4.5-5.6 S lenses (surely a popular three-lens kit), you’ll find that each one of the lenses has a different arrangement of their zoom/focus/control rings. That makes for a frustrating user experience.

Beyond that, the control ring on the Nikon Z 24-120mm f/4 S can only be set to adjust aperture, ISO, or exposure compensation. I find that it’s easy to hit the control ring by accident since it’s positioned so close to the camera body. I just leave it disabled. 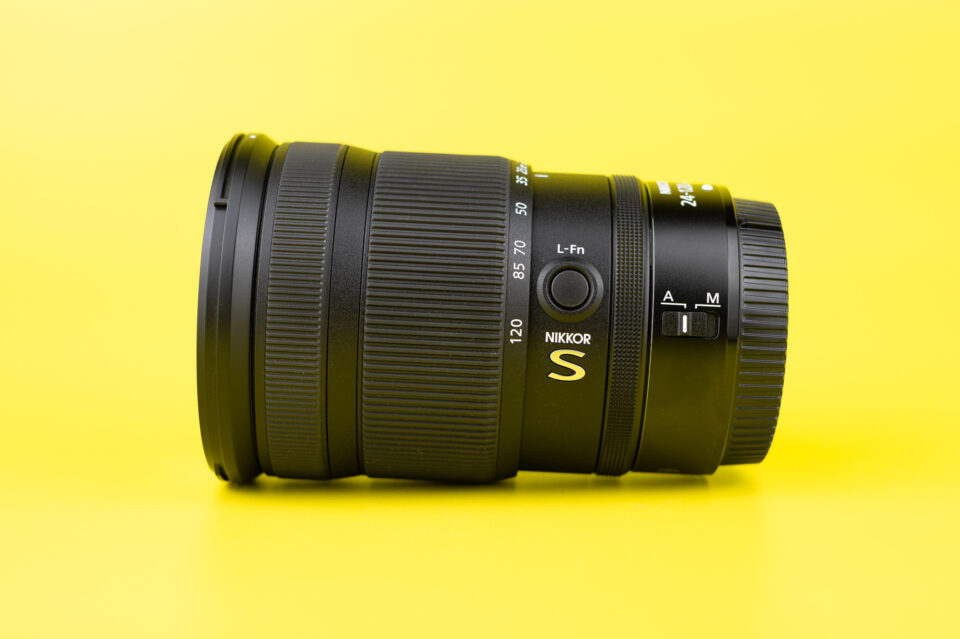 Next up, I’ll cover the optical characteristics of the Nikon Z 24-120mm f/4 S, including focusing performance and sharpness tests in the lab. So, click the menu below to go to the following page of this review, “Optical Features.”