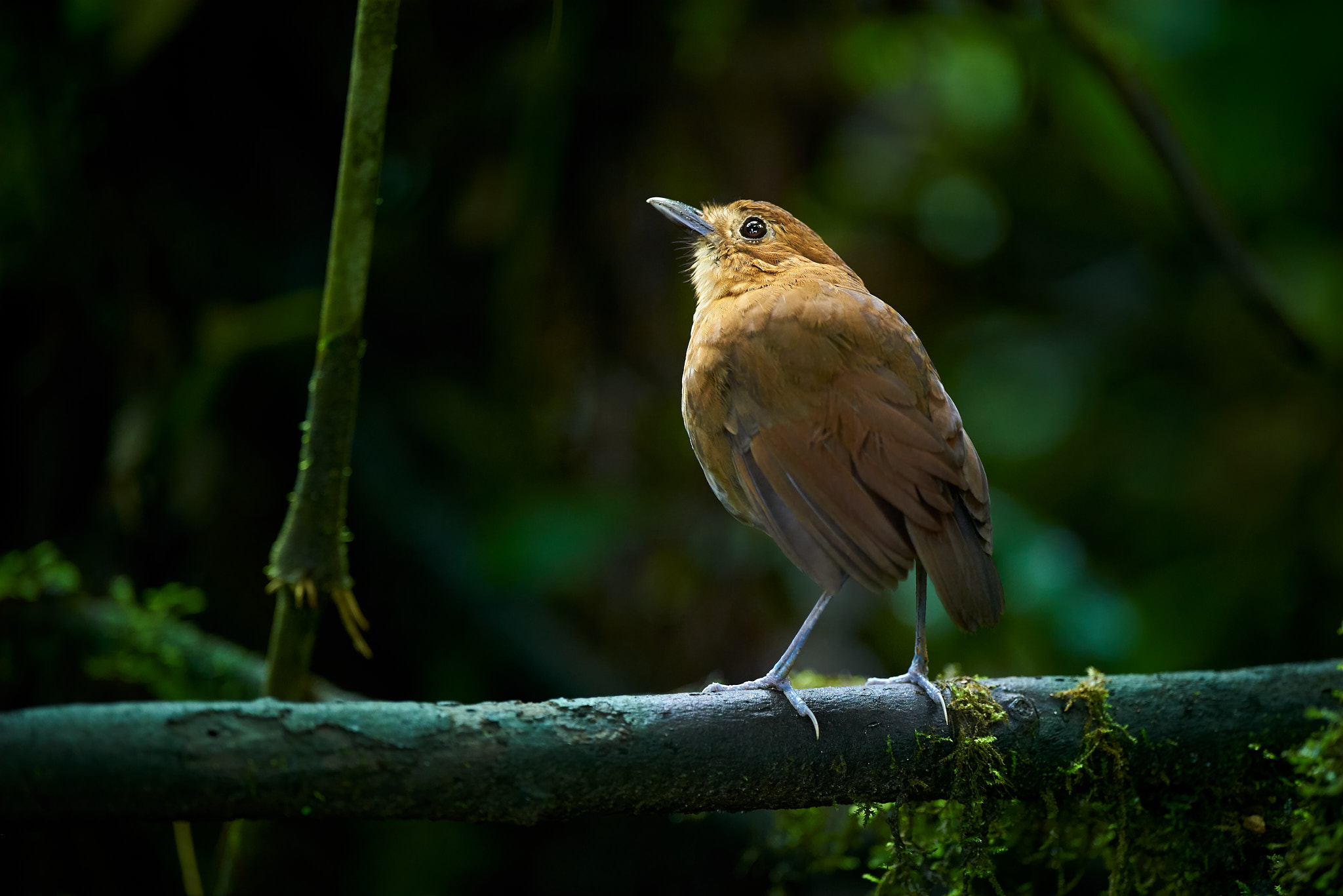 “Just an f-stop or two.” This basically sums up the benefits of fast telephoto lenses. The difference between $3000 and $13,000 may be as simple as f/4 versus f/2.8. Is the price – and the weight – worth it for wildlife photography? I’ll try to answer that question in today’s article.

You’re photographing birds in a tropical forest where there’s not much light during the day, let alone at night. The sun sinks to the horizon, and you start to pack up your gear. After all, a long shutter speed is out of the question with your subject matter, and your ISO is already above ten thousand. Of course, you maxed out your aperture at f/5.6 long ago.

But your friend next to you is still looking around, and it seems like he’s taking a photograph. Whereas you’ve pushed to ISO 12,800 already, his camera shows a mere ISO 3200 instead! It dawns on you that this is the difference between a maximum aperture of f/5.6 compared to f/2.8.

This story is obviously just one extreme of the spectrum, but it’s something that happened to me many times in one form or another. Those “f-stop or two” start to feel a lot more important at the edges of the daylight.

At the same time, a maximum aperture of f/4 or f/5.6 can be plenty if the conditions aren’t a grim as I described above. Even around sunrise and sunset, you can shoot with a narrower aperture so long as you’re in an open area instead of a forest. Maybe instead of going with either extreme – say, choosing between a 300mm f/2.8 prime or a 200-500mm f/5.6 zoom – you could go with a compromise solution, like a 300mm f/4.

You’re sitting on the sofa, reading a book, when you suddenly realize you can’t focus on the letters any longer as it gets dark outside. Naturally, you just turn on the light – but that’s hard to do outdoors when you’re photographing wildlife. Even using a flash won’t help the camera’s focusing module, which relies on ambient light to focus on a quickly-moving animal.

Fast telephoto lenses have the edge in focusing speed and reliability over their slower counterparts. But not all slow-aperture telephotos have a bad focus speed. For example, the Nikon 200-500mm f/5.6 is a pretty sluggish focuser, but the Nikon 500mm f/5.6 PF is as quick as an exotic telephoto… that is, when there’s enough light. You can’t fight physics. As the light gets more scarce, an f/2.8 lens will keep feeding your focusing system those sweet, sweet photons, while an f/5.6 lens will struggle.

So, if autofocus reliability is your concern, think about the conditions that you tend to photograph wildlife. Does your subject move pretty slowly? If so, you can probably get away with most telephoto lenses, including slower focusing optics and third-party glass. If not, you’ll want a lens with a faster focusing motor. But even then, you may be good with an f/5.6 or f/6.3 lens so long as you tend to shoot in brighter conditions.

Teleconverters don’t play well with slow lenses. Sure, you can use a 2x teleconverter with an f/5.6 lens if you want, but your maximum aperture will then be f/11 – enough to harm any autofocus system. That’s especially true of DSLRs, whose phase detection systems may refuse to focus entirely at such a narrow aperture.

Personally, I prefer lenses that are f/4 or wider when I want to use a 1.4x teleconverter, and f/2.8 or wider for a 2x teleconverter. This keeps my maximum aperture at a reasonable f/5.6 in both cases. It’s not an unbreakable rule, and I definitely push my lenses further than that sometimes. But when I do, I notice that the autofocus system struggles most of the time.

It’s a bit of a myth that wide aperture telephoto lenses are necessarily better in sharpness. In practice, a good lens can be designed to have an f/2.8 maximum aperture, f/5.6 maximum aperture, or almost anything else.

What is true is that almost all “cheap” telephoto lenses are designed with narrow maximum apertures. You probably can’t expect a 100-500mm f/6.3 No-Name lens to measure up to a Nikon, Canon, or Sony 300mm f/2.8 in sharpness. But just the same, if a lens company wanted to make a top-notch 300mm f/5.6 and poured their best tech into it, there’s no law saying it will underperform a 300mm f/2.8 in the shared aperture range.

As a Nikon shooter, I’m most familiar with Nikon’s performance, so I’ll give some examples from my experience. Lenses like the Z 400mm f/4.5, 500mm f/5.6 PF, and Z 800mm f/6.3 all have somewhat narrow apertures, but they are also extremely sharp and perform to the standards of f/2.8 or f/4 glass.

In short, judge each lens on its own merits. It’s true that most exotic f/2.8 and f/4 super-telephotos are extremely sharp, but their narrower aperture counterparts can be extremely high quality optics as well.

Depth of Field and Bokeh

A creamy, shallow depth of field is one of the biggest selling points of fast lenses. Wildlife photographers across the world tend to adore this look. But do you need f/2.8 to get there?

The truth is that I often find myself shooting at narrower apertures like f/4 or f/5.6 deliberately, even when I have an f/2.8 lens, because the background blur is too much at the maximum aperture! With wildlife photography, it’s easy to get a shallow depth of field much of the time.

That said, I’m still a sucker for the f/2.8 look sometimes. Fast prime lenses certainly capture it more easily than slower primes or slow zooms, and that’s part of what I like about my f/2.8 glass.

In many cases, it’s not just about creamier backgrounds, but also about separating something like a bird from distractions like tree branches around it. In cases like that, I don’t care so much about the background – more about the region right in front of and behind my subject. A wide aperture cleans up the photo for you by tidying up the branches into a picturesque blur.

So, in this case, wide aperture lenses come out ahead. Even if you stop them down slightly sometimes, as I do, you at least have the option to blur the surroundings into oblivion. That’s not a choice you’ll have – at least not to the same degree – with an f/5.6 or f/6.3 optic.

Sort of like optical performance, good build quality has long been associated with those massive 300mm f/2.8 and 400mm f/2.8 lenses. But that’s just a side-effect of camera companies pouring all their efforts into these lenses, and not something directly to do with the maximum aperture.

There’s no reason why a 400mm f/4 can’t be built as well as a 400mm f/2.8. And sometimes, the narrower aperture lenses are built as well (or at least close). As with optical performance, it’s something to evaluate on a lens-by-lens basis.

The same is true of the lens’s handling, specifically the button layout. I’m a fan of the Memory Recall button that is found on higher-end lenses, including almost all f/2.8 telephotos. But some narrower-aperture lenses have it too, like the Nikon 500mm f/5.6 PF.

On balance, the build quality, weather sealing, and handling of wide-aperture exotic telephotos will be better than on a narrower aperture lens. But that’s just because those lenses are higher-end in the first place and tend to get a camera company’s higher-end features.

Now we’re getting to the meat of things! Because with all the categories so far falling on the side of fast aperture lenses, maybe you were wondering if there is any reason to get a narrower aperture lens at all.

Even if you’re not on a budget (congrats!) you may still be happier with an f/5.6 lens simply because of the weight. I can always feel my back, and not in a good way, after using a 400mm f/2.8. Whereas my 500mm f/5.6 PF leaves me sleeping as light as a feather.

Often, when I’m not planning to shoot in forest conditions, I’ll deliberately choose to bring along one of my lighter lenses and leave the 400mm f/2.8 beast at home. This makes me more mobile and more flexible in trying unusual compositions and walking further to find my subject. Like everything in life, it’s a compromise, but f/4 and f/5.6 lenses definitely strike a better balance than f/2.8 glass much of the time.

Forget everything I’ve said so far. The bigger your lens, the more respect you’ll get from other photographers. There’s something primal about it. You’ll garner admiring glances from men and women alike!

Okay, okay. Maybe that’s not the most important thing about photography. But I hope I at least distracted you from more serious considerations for a bit.

Perhaps more than the question of whether you really need a fast telephoto lens, you’re worried about where to get the money for one in the first place. I’m afraid I can’t help you with that, as I’m too deep in that pit already.

In any case, I’ll be happy if you leave me a comment below the article – for example, on the subject of why we don’t need fast telephoto lenses. Maybe you can help other readers save a lot of money that way!

Photographer’s Automatic Lens Cap Shields Camera During Rocket Launches
Fujifilm Warns Its 35mm Films in Short Supply ‘for the Time Being’
TTArtisan Introduces a $200 35mm f/0.95 for APS-C Cameras
All Topaz Labs Image Enhancement Apps on SALE: Save at 25%+ Until 12/2
The Hive Lighting Bumble Bulb PAR30 is an Omni-Color LED light built for high-end production