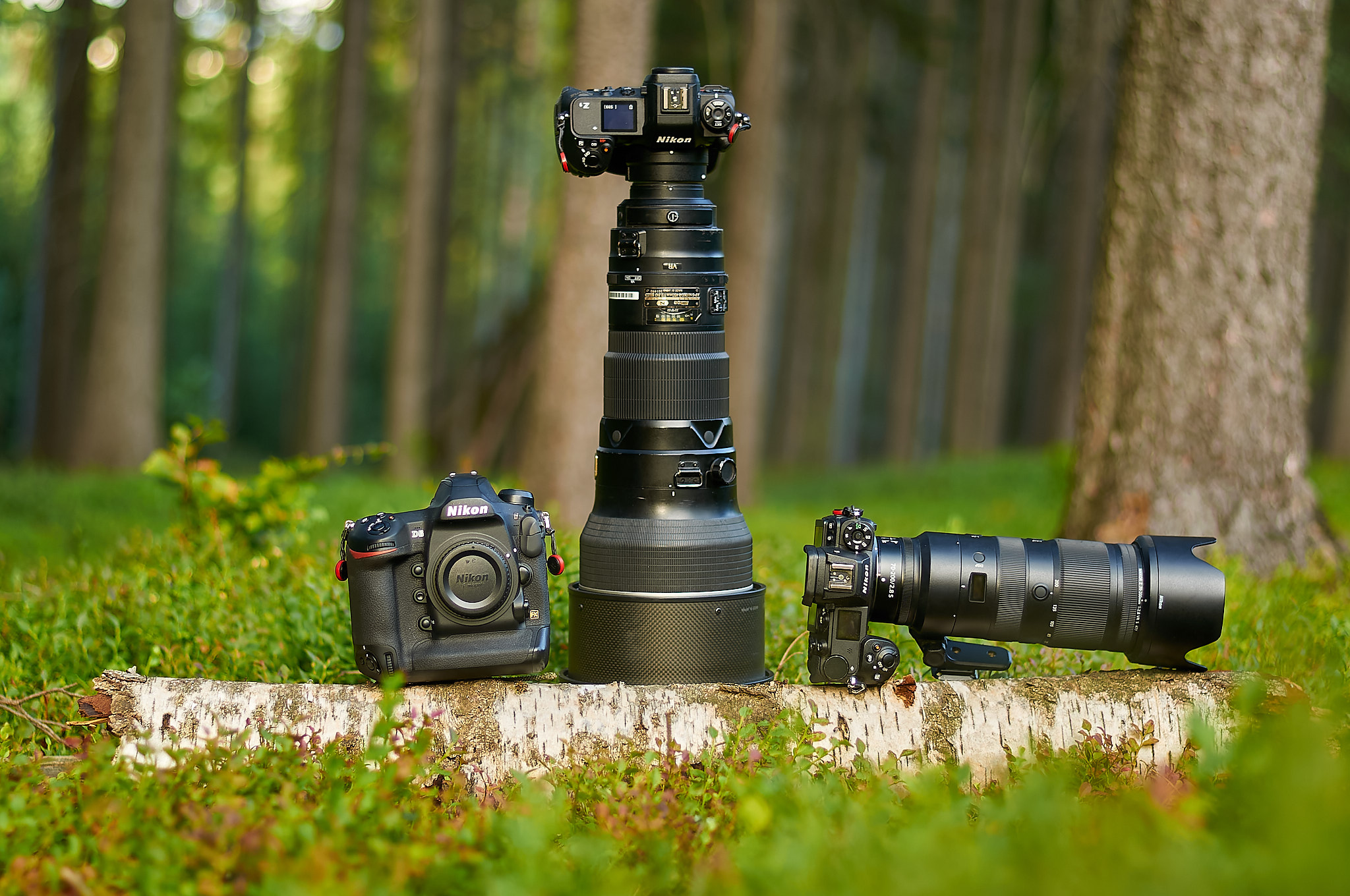 What is the best Nikon camera for photographing wildlife? Since “wildlife” encompasses so many things, from birds to lions and everything in between, it’s a hard question to answer. If you ask a random wildlife photographer which feature is most important to them, one might say autofocus while another might say lens selection or even weather sealing. But for those of you who are getting into wildlife photography and want help choosing a camera – or for established wildlife photographers who want to validate their choices/yell at me in the comments – I’ve ranked Nikon’s best cameras for wildlife photography here for your consideration.

Arguably the best Nikon camera for wildlife today is the Nikon’s flagship the Z9. If I could choose any camera on this list to go out and shoot with, it’d most certainly be the Z9. I’m sure it’s not a surprise that it takes the #1 spot on my list.

On one hand, the Z9’s autofocus is outstanding, and it equals or exceeds the DSLR flagship Nikon D6 in most areas (more on that in our Nikon Z9 review). Aside from its autofocus, the Nikon Z9 also has a very fast frame rate of 20 FPS when shooting RAW. It is also the first Nikon flagship to have a 45.7MP sensor, which is very useful for cropping a little when you can’t seem to get that small bird to fill the frame.

There are two reasons why I would choose the Nikon Z9 over any Nikon DSLR. First, the Nikon Z9 has access to Z glass like the Nikon 800mm f/6.3 and the Nikon 400mm f/4.5, as well as all the F-mount lenses, which adapt extremely well on this camera. And second, the Nikon Z9 has far superior video capabilities, which many wildlife shooters are starting to experiment with.

The Nikon Z9 has two main downsides: its size and its price. Some people love the built-in grip, and indeed as a wildlife photographer I know how hard it is to shoot vertically without a grip! However, there are other times when I prefer smaller cameras to keep the overall weight low. And as a $5500 camera, it’s out of reach for many photographers, especially once you consider the price of a good telephoto lens. Even so, I believe the Nikon Z9 is Nikon’s best wildlife photography camera ever made.

The D6 is Nikon’s most advanced DSLR. Wildlife photographers have been using the D1/D2/D3/D4/D5/D6 series for decades, and the D6 continues that tradition. It has an amazing autofocus system, tank-like build quality, and a high frame rate of 14 FPS bursts.

Like the Nikon Z9, the Nikon D6 has the potential downsides of price and weight. It actually costs $1000 more than the Z9 and weighs a bit more. The D6 has another potential downside, too: its 20.8MP sensor leaves less room for cropping. (Some wildlife photographers may prefer the smaller files, but keep in mind that the Nikon Z9 already has high efficiency RAW files that are barely larger than the D6’s file size.)

I think if you are really dead-set on using DSLRs, the D6 makes sense. Likewise, if you photograph more unusual subjects (i.e. not people, birds, or big mammals), the D6’s autofocus system sometimes beats that of the Z9 in our tests. That’s because the D6’s AF system is more “generalist,” whereas the Z9’s system is based on subject recognition.

Even so, between the two, I’d still recommend the Nikon Z9 for most wildlife photographers.

The D850 is Nikon’s best all-purpose DSLR, striking a great balance between capability and affordability. It is more compact than the flagship gripped cameras like the Z9 and D6, and yet it still is very capable in the autofocus department.

In fact, for some wildlife photographers, the D850 would beat the Nikon D6 even if both were the same price (and right now, the D850 is $2800). Although the D6 might be more suitable in some cases due to its more advanced autofocus system, the D850 has that beautiful 45.7MP BSI sensor, which makes it more flexible when cropping is needed.

The sensor on the Nikon D850 performs similarly to the sensor on the Nikon Z9. So if you want that level of image quality with a still-excellent autofocus system, while saving money, the D850 remains a very appealing choice even in 2022. Be aware, however, that the camera can “only” shoot 7 FPS (9 FPS if you buy the battery grip accessory), which definitely isn’t as speedy as the D6 or Z9. I personally think that high FPS bursts are overrated for wildlife photography anyway, but not all wildlife photographers agree with me.

The Nikon D500 is one of Nikon’s most popular wildlife DSLRs. Not only does it have a very capable autofocus system that can handle most wildlife scenarios, it is also very affordable with a current MSRP of $1500.

I personally use the Nikon D500 for most of my wildlife photography, and I’m still impressed at how well it holds up despite being a somewhat older DSLR. And based on what I hear from other wildlife photographers, it seems like the D500 is one of those few DSLRs that people still have an interest in.

So, does it still make sense to get a D500 in 2022? I definitely think it does. It has a similar autofocus system as the Nikon D850, but arguably even better because the same system covers a wider area of the viewfinder on a crop sensor camera like the D500. It also shoots up to 10 FPS bursts, which is plenty for most wildlife photography.

Probably the biggest downside of the Nikon D500 is that it uses a cropped DX sensor instead of full-frame. This harms the camera’s low-light performance. It’s also 20 megapixels rather than 45 – although if you were planning to crop your files a lot from the D850 anyway, the difference isn’t as huge.

I still have plenty of life left on my D500, and I plan on using it for quite some time!

The Nikon D5 was Nikon’s flagship when it was released, and it is still immensely capable. The same is true of the previous generation D4, D4s, and even the older D3 series. All of these cameras are getting pretty old now, but they deserve to be on this list because you can buy them used at amazing prices. For example, a few months ago, I saw Nikon offering refurbished Nikon D5 cameras for around $2000 USD!

Like the Nikon D6, the D5 has a 20MP full-frame sensor. In many cases, this resolution will be fine, especially if you are using lenses that are long enough for your subject. On the other hand, even a 500mm or a 600mm lens can be a little short for small birds, and 20MP is a bit limiting when it comes to cropping.

Still, you can’t beat the prices, build quality, and high ISO performance of these cameras. Even their autofocus systems are still extremely competitive in today’s world. Considering that you can easily buy a used Nikon D4 (16 megapixels) for under $1000, I’d strongly consider these if you’re on a budget.

The Z7 II is a bit different than the other cameras on this list. It does not have a very advanced autofocus system, and so it’s not ideal for fast action. However, wildlife encompasses more than just fast action. For slower scenes like large mammals, macro photography, or perched birds, the Z7 II is a very good camera.

Some of its best features for wildlife photography are the 10 FPS burst, 45 megapixel sensor, and solid buffer (about 7 seconds of continuous shooting before the burst rate slows down). The autofocus system won’t win any awards, but it’s also not as bad as some reviews make it out to be – it’s very accurate and fast, just not good at tracking.

The Z7 II is relatively small compared to the Z9, so it would be great if you prefer smaller cameras. And of course, as a mirrorless camera, it has access to Nikon’s latest Z telephoto lenses. A combination like the Z7 II with the Nikon 400mm f/4.5 would be a very attractive, compact combination for handheld wildlife photography.

The Z6 II is very similar to the Z7 II, which means it’s good for slower animals. I only put it lower on the list because it has fewer megapixels: 24MP versus the 45.7MP of the Z7 II. In my experience as a wildlife photographer with the original Z6, there are just too many instances where I would have liked to have a few more pixels.

On the other hand, I actually prefer using my original Z6 to the D500 at times, especially when I want low-level shots taken where the camera is on the ground. The Z6’s tilting screen works very well for birds that are feeding in the grass or on a mudflat like shorebirds. So although people sometimes dismiss the autofocus of the Z6 and Z6 II, it is more than capable for many wildlife situations.

The Z6 II also has slightly better video quality than the Z7 II. Since both cameras shoot the same resolution of video, if you see yourself filming a lot of wildlife videos, the Z6 II would be a superior choice over the Z7 II (and actually superior to any camera on this list except for the Nikon Z9).

Note that for this list, I’m specifying the Z6 II and Z7 II simply because they are Nikon’s current models in these lines. But the previous generation Z6 and Z7 are also capable cameras and sell for very good used prices. They lack some autofocus improvements, and a few features like dual memory card slots. So it depends on your balance of budget versus requirements.

There are a few cameras that didn’t make this list. These cameras could be still very capable in specific situations, and are worth considering if you are on a budget. For example, the Nikon D7500 has a very solid autofocus system, and I wouldn’t hesitate to rely on it, even though it’s a bit less powerful than the D500. The same goes for earlier cameras in the same series, like the D7200, if you’re on a budget.

Another camera that most people ignore is the Nikon Z50, which is Nikon’s first DX (APS-C) sensor camera for Z-mount. It, too, is roughly on the level of the Z6 II or Z7 II in terms of autofocus, so the Z50 would be great for those slower wildlife encounters without breaking the bank.

Finally, Nikon is definitely planning to release more mirrorless Z cameras. They may even follow Canon and Fuji and release an advanced APS-C model dedicated for wildlife photography, although Nikon has not confirmed that as of 2022. Thus, if none of the cameras on this list tick all your boxes, you can keep shooting with what you have and wait for a more suitable camera to appear later!

Did I forget your favorite camera? Would you recommend something else for wildlife? Please let me know in the comments!