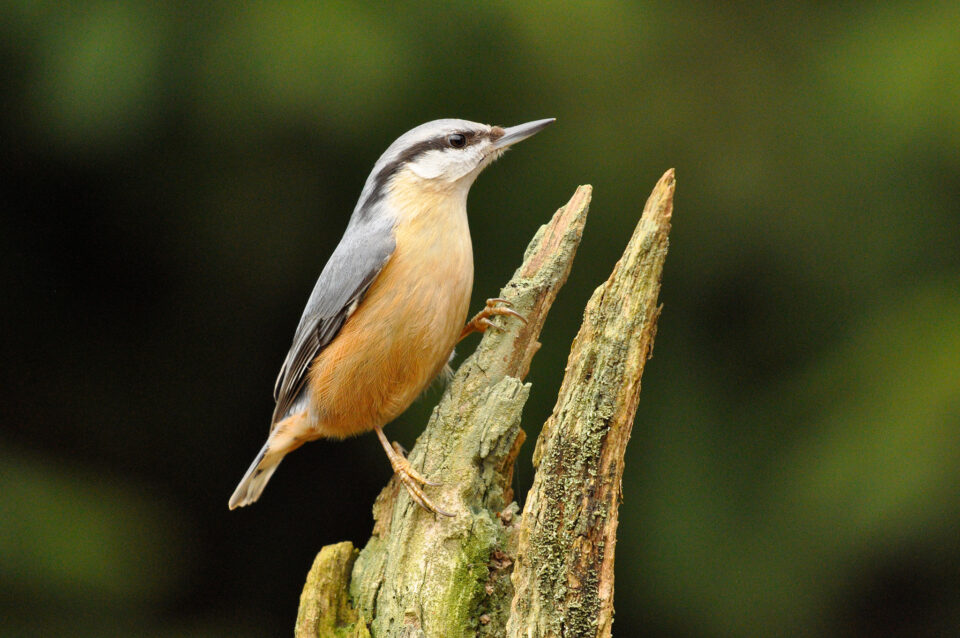 Maybe this has happened to you, too: You head out with your camera, ready to take some great photos, only to find that you left your memory card at home or forgot to charge your battery. (If this hasn’t happened to you, maybe you’re less distracted than I am.) In such a situation, you might be glad to have an old backup camera along with you, to bring back at least a few photos from the field.

One spring morning, I set out to photograph the Blue and Crested Tits around our cottage in the mountains. Everything was perfect: the birds were landing where I wanted, and the morning light was beautiful. However, I learned that my camera batteries were at zero. I had no choice but to reach for my son’s Nikon D90, mount it on my Nikon 200-500mm f/5.6, and take it for a test run.

Although the light was nice, there wasn’t much of it. With my Nikon D500, I would have set ISO 3200, but I didn’t find the courage to set that on the D90. With this nearly 15-year-old camera, ISO 3200 and anything higher is certainly suitable for photographing the Loch Ness monster or a UFO, but not ideal for serious photography.

Because I wanted to take home some usable photos, I chose a fairly conservative ISO 1600 instead. By today’s standards, this ISO sensitivity can be used even for landscape photography without much issue, but fifteen years ago with an APS-C camera, it was about the limit of usability.

Camera sensors have made great progress in the past fifteen years, but editing software has also taken a giant leap. Almost every software from Lightroom/Photoshop to its many competitors have drastically improved their noise reduction over time. So I also wondered if, using my current software, I could make the photos at ISO 1600 pretty usable.

In order to create a reference point, I converted (in camera) the original RAW file to a JPEG. I leave the image below uncropped so that you can judge the image quality of this 12.3MP sensor from 2008, downsampled to web resolution.

As you can see, the resulting photo certainly cannot be described as noise-free. However, if we don’t view it at 100% magnification, it is pretty usable. The sharpness and colors are not dazzling, but it should be considered that this is an unedited photo. Certainly with better post-processing, the image would be acceptable for online display, something like this:

However, the measure of a photographer’s work should not be an Instagram post, but a printed photograph. I wanted to see if I could get usable prints out of these images using my current photographic process and newer software.

First, I pre-edited the RAW file with DxO Pure Raw, to remove lens aberrations, reduce noise, and sharpen the image. (I’ve talked about the process before here.) I then did careful tweaking of color rendition and contrast in Capture One – although I’ll wait until a future article to dive into full detail.

Let’s take a look at the resulting photos instead. On the left (“before”) is the out-of-camera JPEG, and on the right is the version with modern tools:

I think those speak for themselves. Aside from the obvious resolution limit of 12.3 megapixels, I dare say that the photographs are perfectly suited to today’s requirements for exhibition prints.

In fact, that the photo of the Nuthatch – taken by my then five-year-old son – won the first place in the children’s category of the Czech Nature Photo competition! I think that proves it. (I also think I’m allowed a bit of bragging on his behalf 🙂

Even if it were necessary to print a low-resolution photograph at a larger sin, there are powerful tools today that can reliably extrapolate photographs by 2x, 4x, or even more. But that’s another story.

So, what is the point of my photographic contemplation today? No, I’m not exactly telling you to dig out long-forgotten old cameras from the depths of your cabinets. (Although, as I mentioned before, even that can come in handy sometimes as a backup.) A more practical takeaway from this article is that you should revisit some of your photos from the past and try to breathe new life into them with modern editing software.

If I’ve inspired you to do a little archaeological exploration into the depths of your archives, I’d be delighted. Maybe this will not only bring new life to your old files, but also dust off some forgotten memories. I’d love it if you’d write something about it in the comments below.