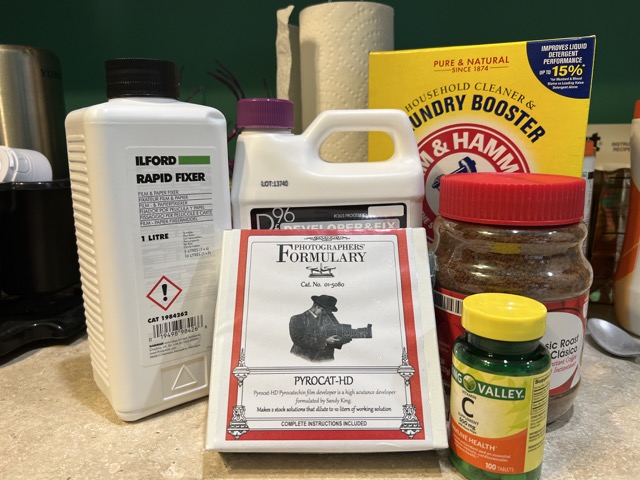 If you want to develop black and white film at home, finding a developer may be just as difficult as picking a film. There are, of course, the classic developers such as Amidol and Kodak Dektol, which have been around since the days of Adams and Weston. Then there are newer developers, like Cinestill DF96 Monobath. Some developers can even be made with ingredients you’d find at home, like Caffenol or Beerol.

With so many developers available today, the choice can be overwhelming. Even if you decide on something, there’s the constant question of whether you’ve chosen the “best” developer for your work. Personally, I think it’s worth the time and money to test a few developers before settling on one – but if you want a head start, I’ve done just that in today’s article.

The Film Developers I Tested

Ilford’s Ilfotec DD-X is a fine-grain developer which provides full film speed, producing negatives that are easy to print with plenty of detail. It also happens to be the first developer for black and white film which I ever used, and my most-used developer in the years since.

I’ve always found DD-X to be quite trustworthy, and it lasts for lots of rolls/sheets of film – perhaps more than other developers would allow. Still, after years of using DD-X, I haven’t been convinced that it’s the best-suited to my photographic needs in the future, so I wanted to test out alternatives.

Many photographers I follow have adopted Pyrocat HD as their primary developer of choice. It’s a high-energy developer with high acutance (leading to sharper-looking photos). Most of all, as a staining developer, Pyrocat HD is well-suited to alternative printing processes done under UV light, like platinum/palladium, carbon transfer, and salt prints.

Pyrocat HD was created by photographer Sandy King as an improved substitute for Pyro PMK. Compared to Pyro PMK, Pyrocat HD has a faster effective film speed by approximately 1/3 stop; the development time is 10-15% shorter; there is more consistent staining action; there is lower toxicity; and there is no streaking or mottling with reduced agitation.

Given the high praise for this developer, I wanted to try my hand and compare it to Ilford’s Ilfotec DD-X. I’m also interested in trying the platinum printing process down the line, which is where staining developers like Pyrocat HD really shine.

I remember when Cinestill DF96 Monobath first came to the market a few years ago. If anything can be described as causing an “uproar” in the film-development community, Monobath certainly qualified.

Cinestill DF96 Monobath is self-completing chemistry, meaning that it combines the developer, stop bath, and fixer into a single formula. It can process a sheet of film in just a few minutes, and it requires no dilution – making it very appealing to beginners, at least in theory.

On the surface, the biggest issue is the difficulty pushing/pulling the film with Monobath, or otherwise altering the development process; the only variable you can control is temperature. Beyond that, after photographers started testing monobath, they tended to report subpar results. I wanted to see how much of that was true.

Caffenol is a cheap way for photographers to develop film at home, using off-the-shelf ingredients. In fact, the primary ingredients are ground coffee and Vitamin C. It doesn’t get any easier than that! Developing with caffenol also means you don’t need to worry about toxicity or issues pouring the developer down the drain.

Going into this test, I was not expecting great results from caffenol, because of its simplicity. But it’s so popular and easy-to-use that I wanted to add it to this test.

There are a few different recipes for making your own caffenol. Perhaps the best resource for recipes and other information on Caffenol (and other alternative developers, such as “beerol”) is that of Caffenol.org. I followed the Delta-STD recipe for the test in this article.

How I Took the Photos for This Test

In order to have a fair comparison, I wanted the film, composition, light, and exposure to be as similar as possible in my test photos. I took the photos of a shed outside on a sunny day without any clouds blocking the sun. (I chose this subject because it had a mix of bright highlights, plentiful midtones, and deep shadows.) I exposed all four sheets of film using the same settings. 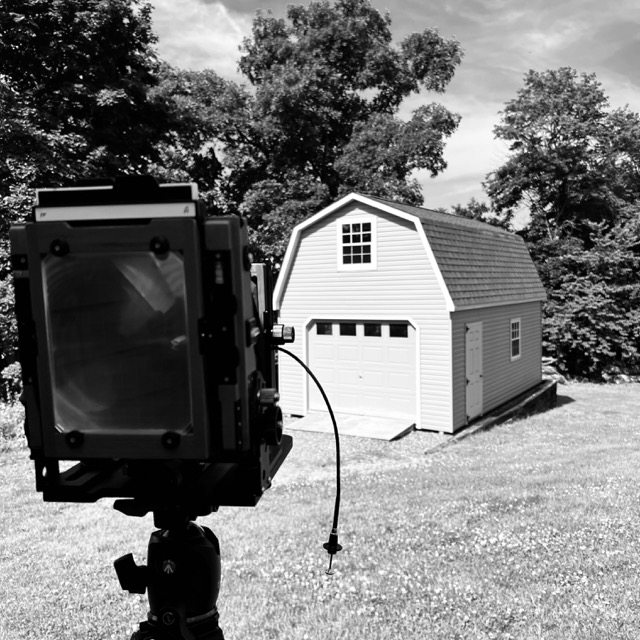 If you plan to do a similar test yourself, make sure to keep as many variables as possible the same. Either shoot the photos indoors in a studio, or outside on a sunny day without clouds.

How I Developed the Film

For one reason or another, I have almost always used Ilford’s Ilfotex DD-X developer and nothing else. But over time, I’ve started to want a developer that I can use for the long-term and keep learning more and more about. Could Ilford Ilfotec DD-X be that developer? This was my chance to find out.

As per my usual method, I developed the sheet of film for eight minutes at room temperature, agitating the film four times every minute. From there, I rinsed the film before fixing it for five minutes (agitating the same as developer) and finished with a five-minute wash.

Of important note, this solution was already open and perhaps slightly exhausted when I used it. It didn’t seem to affect the outcome in a major way (and the negative still had plenty of density), but I wanted to mention it here.

Pyrocat HD is an A/B solution, meaning that you need to combine two parts in order to make the developer. Although parts A and B are available as a gel from some suppliers, the most common way to buy them is as two separate powders. You must mix the powders carefully according to the directions on the box.

It is very important to note that these chemicals are toxic. Pyrocat HD is not a process to mess around with, nor is it one which should be taken lightly. If you do not feel safe mixing chemicals, the instructions themselves tell you to simply return the kit for a full refund. Don’t bother getting this developer if you do not have the ventilation and necessary precautions available to make it safe to mix.

After I mixed a 1:1:500 ratio of A:B:Water, I developed my sheet film in Pyrocat HD in the same way as I developed Ilford’s DD-X. In other words, 70°F, eight minutes of development, four agitations per minute, rinsing, fixing, and washing.

Next I developed a sheet in Cinestill Monobath, which could not have been easier. It’s self-completing chemistry, doesn’t need to be diluted, and already comes in a 1000mL bottle that’s perfect for developing six sheets of my 4×5 film in a Patterson tank.

Following the directions on the bottle, I chose to use the solution at room temperature, developing the film for eight minutes and agitating four times every two minutes. Cinestill does claim that a slightly warmer temperature (up to 85°F) will give more consistent results, and that may be part of why my negative with Monobath turned out a bit thin (more on that later). In any case, since Monobath is all about convenience, I doubt I’ll warm it up beyond 70°F in the future anyway. 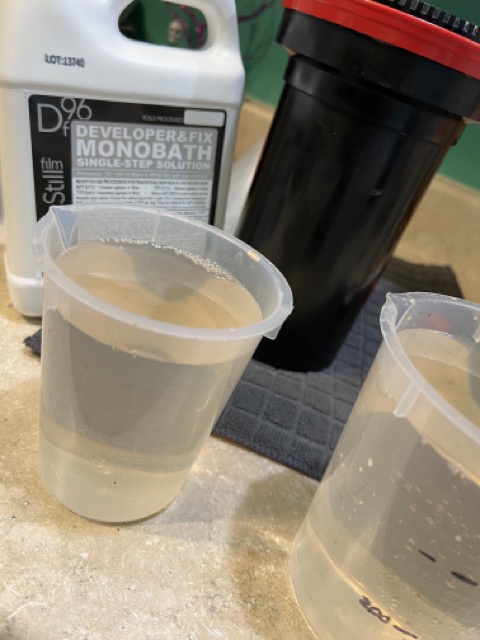 Last is Caffenol. As mentioned, I decided to follow the “Caffenol Delta-STD” recipe found at Caffenol.org. It went like this:

It is important for the water to be at a temperature of at least 68°F (20°C). Further, the recommendation is to make the “coffee/water” mix and the “washing soda/water” mixes separately (500mL of water each). Only then do you combine the two mixes, plus the 3 tsp of Vitamin C, and allow the mixture to stand for five minutes.

After doing all this, I poured the mixture into the Patterson tank and loaded the 4×5 sheet. I set a timer for ten minutes and agitated the film four times each minute. Then I rinsed the tank, fixed the film, and washed it.

Upon pulling out the developed sheet of film, I immediately noticed how dense the negative turned out. Wondering if I had done something wrong, I exposed a fresh negative of a similar scene and followed the same steps: 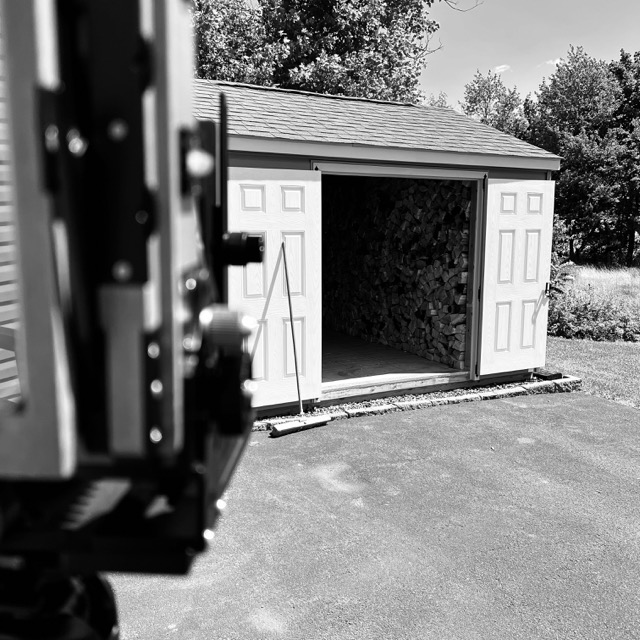 The second negative turned out a bit less dense, but it was still denser than I had expected.

Here are the four images, scanned and converted to positives:

I scanned these with the Epson V850 scanner and Silverfast SE Plus 8 software, with the same scanning settings for each.

The biggest issue of the bunch is that the Cinestill negative was so thin that the resulting scan – the bottom left image above – looks totally underexposed. Perhaps I need to experiment more with the temperature of this developer, but this is still not a good result, since I followed the directions for developing at 70°F.

Another issue is with Caffenol. On one hand, the film turned out surprisingly dense, which could make printing and scanning a bit tougher (though dense negatives are certainly easier to print/scan than thin negatives). The bigger problem is that the Caffenol image has some odd dots and streaks in part of the image, which you can see especially on the right-hand side of the photo.

Pyrocat HD rendered the scene in the most accurate manner. I would not be opposed to leaving the frame as-is, without retouching it in software, and making a print of it. But the DD-X image is also good for scanning and darkroom printing; even though it’s a bit dense (i.e. appears overexposed in the scan above), that’s easy to correct both in the darkroom and when scanning.

Even though I was happiest with the Pyrocat HD and Ilford DD-X developers in this test, the more important consideration is simply the process of using these different developers. Caffenol is cheap and nontoxic; Monobath is almost too easy; Pyrocat is more hazardous to mix; DD-X is a good, all-around choice.

I’m still intrigued by how easy Monobath was and intend to test it at different temperatures, and perhaps with giving the negatives more exposure in the first place. But for now, I’m going to switch to Pyrocat and try to master it over the coming years, especially when shooting large format.

Let me know in the comments if you have any questions about these four developers, or if you have a favorite developer of your own!