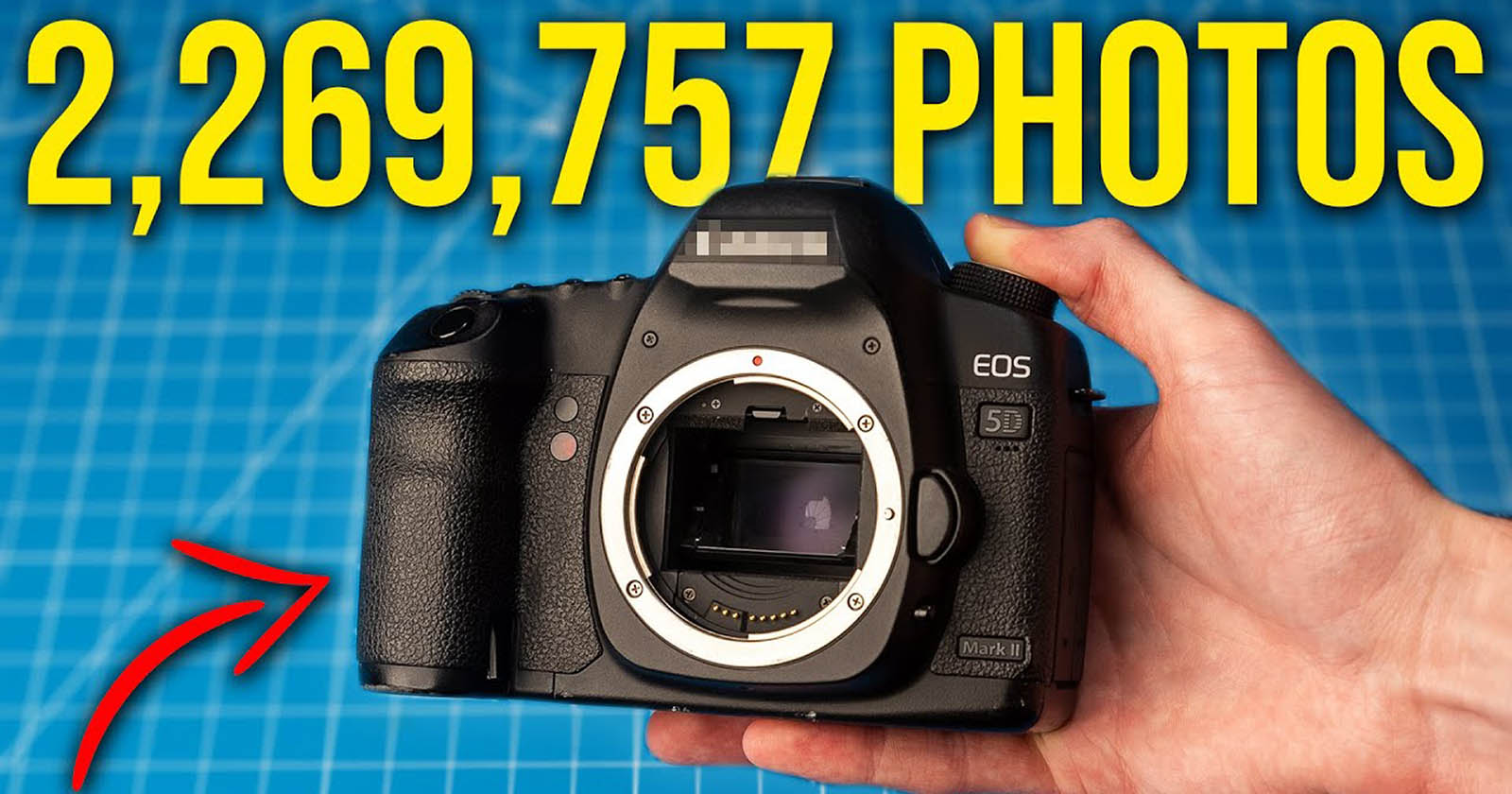 Anyone who has owned a DSLR camera has likely heard that most of them are rated for 150,000 to 250,000 shutter actuations (clicks) before they are expected to need maintenance and/or replacement. YouTuber FoxTailWhipz (AKA Adam Harig) managed to one-up that number by finding a Canon 5D Mark II with over 2.2 million shutter clicks!

According to Canon’s official shutter rating for the 2008 model DSLR, the 5D Mark II should have an average life of 150,000 clicks to it, even if that is a conservative estimate. Those who take good care of their systems also know that the life expectancy of the shutter can sometimes surpass that by tens or even hundreds of thousands of photos — my own Nikon D800 lasted for over 500,000 clicks before dying.

This particular unit found by Harig on the MPB website was listed as having an insane amount of images taken with it, making him believe the system had to have had its shutter (and/or other components) replaced. Since the system was listed for just $200, he felt compelled to nab it, if for nothing else just to see the legendary survivor in person.

Opening the box he noticed that the camera was actually in very good condition for its age. There were quite a few scuffs and scratches around the body, but beyond that no other visible damage with all the buttons and menus working completely fine.

Based on what he verified upon the receipt, if the camera was purchased new back in 2008 when it was released (14 years ago) and was used continuously, it would have taken 162,125 photographs per year (13,510 photos per month, 3377 photos per week, or 482 photographs per day).

Basically, whoever owned this system was very, very, VERY busy. And even so, they were able to keep the camera in very impressive working condition during that time.

Based on his own personal usage of cameras and how they deteriorate over time (think specifically the glue and rubber components), Harig theorizes the camera must have been used by a sports or wildlife photographer, (someone who shoots a lot of burst images), but that may not be the case since, with that sort of usage, one would expect the system to show much more signs of wear and tear having over a decade of use in the wilds or in an arena.

A commenter on Harig’s video (spotted by PopPhoto) guesses that maybe it was used as some sort of industrial “time-lapse” camera where it would have been inside of a weather-proof case/box and controlled remotely by a computer.

Regardless of how it was used and how it managed to survive so long, Harig has reported since posting the video, that the Canon 5D Mark II is still going strong as a workhorse DSLR, and according to him, it’s working as if it were a brand new system. The question now is, just how long can we expect this unicorn of a camera to keep functioning and could it possibly set some kind of record for the DSLR world’s longest-lasting shutter?

National Geographic Reveals its 2022 Pictures of the Year
Cardi B and Her Photographer Sued for Copying Artist’s Marge Simpson Piece
The Nanlite T8-7X tube light is the perfect replacement for annoying fluorescents
⭐ Easy Duo Tone Effect In Photoshop!
The SanDisk Professional PRO-G40 SSD is the Ideal 4K/6K Video Working Drive