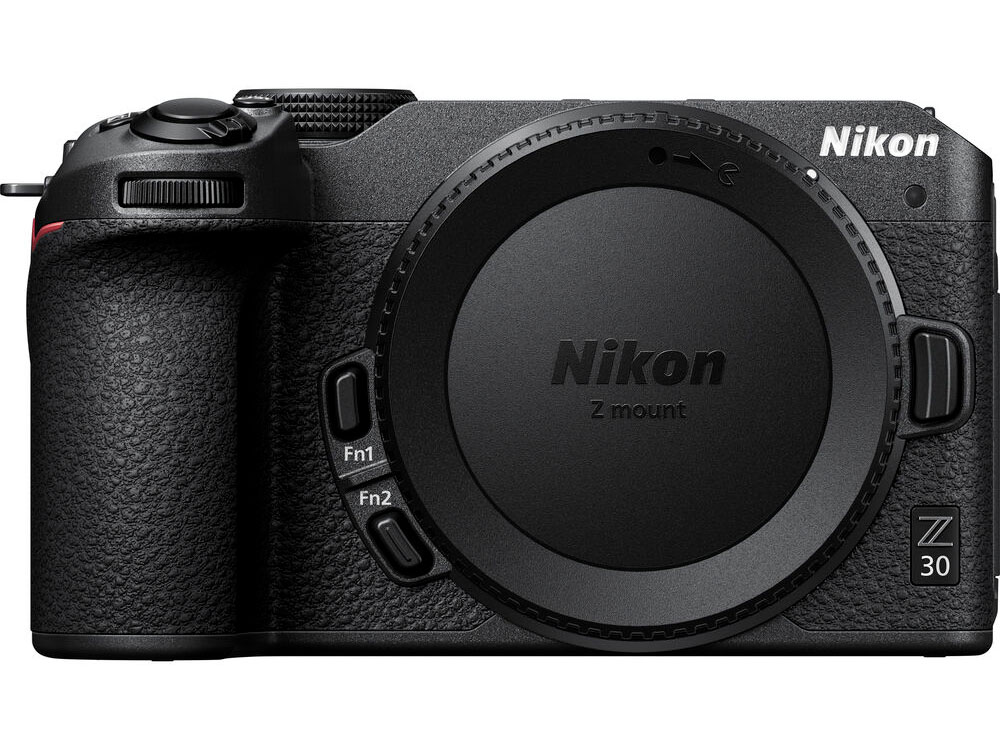 The Nikon Z30 is the most entry-level camera in the Nikon Z series yet – and the first without a viewfinder. Nikon’s advertising leans heavily on the camera’s video prowess, although its specs frankly aren’t very different from those of 2019’s Nikon Z50. It ships mid-July for $710 body only.

Not listed in the specifications above are some new video features on the Nikon Z30. Namely:

The first two are welcome features for working videographers, although the third isn’t as important, since most will use an external mic for important projects.

I’m a bit underwhelmed by the Nikon Z30’s features. It’s a less expensive Z50 ($710 vs $860), without the EVF and with few meaningful improvements in more than two years, other than an articulating screen. On top of that, I’m frustrated that Nikon is missing some important video-oriented details on a camera they advertise so heavily for the vlogging crowd. The Z30 has no headphone jack, for example, let alone more advanced video features like in-body image stabilization or 4K 60p.

As a side note, I have yet to find detailed video specifications for the Nikon Z30. Surely they’re available somewhere, but after extensive searches, I’m still in the dark. Is the Z30 capable of 10-bit recording? N-log? 4:2:2 sampling? Who knows. That should be easy information to find if Nikon really wants videographers to care about the Z30.

If this were still 2019, and the Z30 had been announced alongside the Z50, I would hardly be complaining about it. The differences between the Z30 and Z50 are minor, except the Z30 loses the viewfinder and adds articulation to its LCD, plus those small video features like a tally light. At the time, that would have been a reasonable tradeoff for a camera that costs $150 less. The trouble is that it’s mid-2022, and the Z30 already looks like it needs a refresh as much as the Z50. (To the same point, Nikon appears to have matched the Z30’s features very closely to those of the Sony ZV-E10, which was announced 11 months ago.)

An alternative that would make the Z30 look more logical is to put it on sale immediately, so that Nikon has a true entry-level price point in their camera lineup. Remember that the Nikon D3500 launched for $500 with a kit lens four years ago; the Z30 is $850 with a kit lens, hardly even targeting the same market. The Z30 has better features of the two, of course. But the reason Nikon’s D3000-series cameras sold so well had nothing to do with features; it was all about price. The Z30 should be closer to $600 with a kit lens if Nikon wants to fill a similar slot in the market – which I think should have been their goal from the start.

I’d still recommend the Nikon Z30 to some photographers, albeit halfheartedly. I like the 11 FPS shooting and good low-light sensor borrowed from the Z50. If you’re shopping for a Nikon camera on a budget, yet you don’t want to buy used or refurbished, the Z30 is a reasonable choice. But I don’t think it’s great that Nikon’s first entry-level camera in the Z series already looks slightly outdated and overpriced on day one.

Hey, how did this link get here? I wonder if it’s what you should get instead.

The smallest and lightest mirrorless camera among the Nikon Z series, with thoroughly pursued ease of use for video recording.

Featuring the smallest and lightest body among the Nikon Z series models, as well as a vari-angle LCD monitor, REC lamp that immediately notifies of recording, and up to 125 minutes of recording time*, the Z 30 is a mirrorless camera that gives comprehensive consideration for video recording of a wide range of scenes, from daily shooting to creative expression including vlogs.

In addition, the Z 30 is a camera that pursues ease of use and a design optimized for video recording, so that even first-time mirrorless camera users can casually enjoy imaging expression. It also features functions such as “Creative Picture Control” that enables diverse expressions, 4K UHD/30p video, and slow-motion video, all of which can meet the challenge for more particular video expression.

Nikon will continue to pursue a new dimension in optical performance while meeting users’ needs, contributing to the development of imaging culture, with the hope of expanding possibilities for imaging expression.