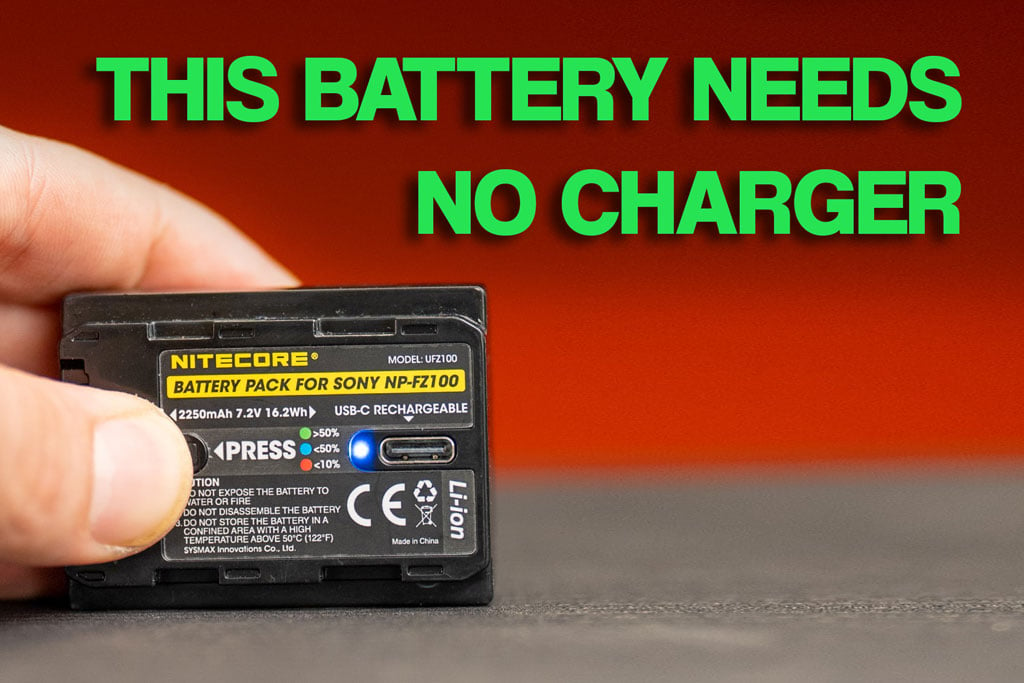 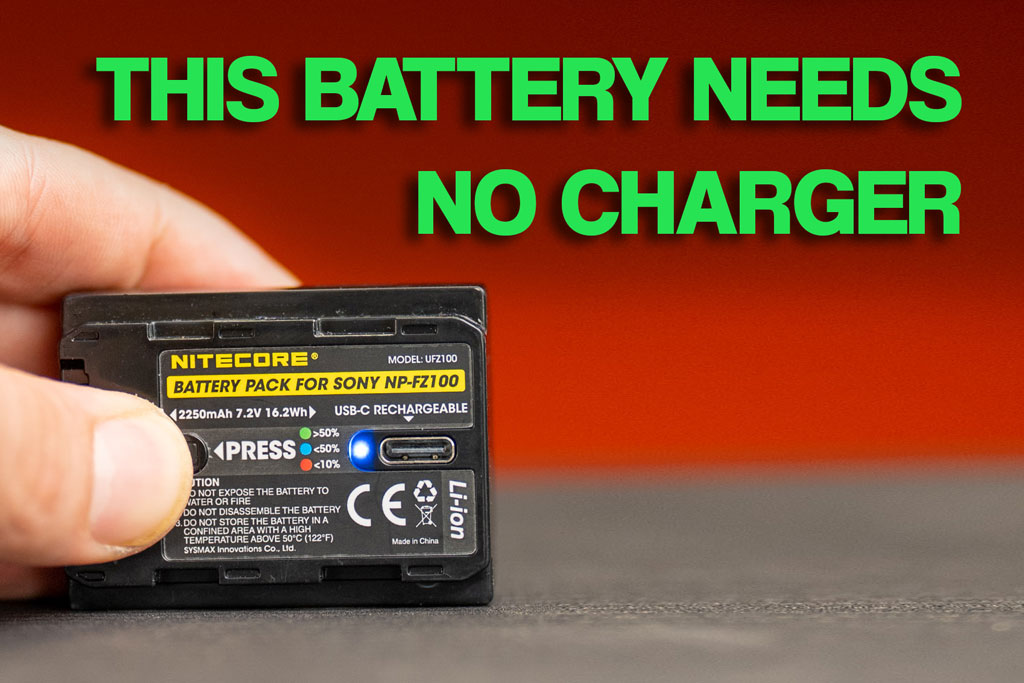 With a raise of hand, how many of you have more than one battery for your photography gear? More than 2? More than 5? More than 10? I personally have more than 20. Each with its own proprietary charger.  Actually, with all those chargers, I am not surprised that some people build a small shrine to worship all those battery maintenance devices.

With some engineering background, this seems highly inefficient. Why not make one standard to charge all batteries. Well, there is such a standard, it’s called USB-C. And Nitecore just brought a Sony-compatible battery that charges via USB-C, the Nitecore UFZ100 (announced here).  It has some other perks as well. hit the jump to learn more.

Having a USB-C port right inside your battery is a clever thing to do. Almost everyone has a USB charger, and you can plug a USB-C cable into a wall, a car socket, or even a power bank. This takes away the need to carry a big, cumbersome charger. (Although Nitecore does make one if you insist).

The UFZ100 is almost identical in appearance to the original Sony NP-FZ100. it has the same form factor so it fits perfectly into any compatible battery slot (I personally tested with the Sony FX3, Sony A7SIII, and the Sony A7III, but I would guess that this sample group is good enough). the previous Nitecore batteries also had Bluetooth functionality, which has been removed from the current iteration.

Here are the dry specs as described by Nitecore.

It seems like Nitecore took everything that is good in the battery industry and incorporate it into their Sony UFZ100 compatible battery. To be honest, I am surprised that other battery manufacturers don’t do so either.

The first thing, of course, is USB charging. It takes about four hours to charge the battery via the USB-C socket (or via a regular charger). The timing was almost identical to a standard NP-FZ100 battery. I could not find a quick charge option, which is something I really miss from my original Sony NP-FZ100 batteries. The battery shows a small flashing red light while it’s charging and it turns green when fully loaded. When the battery is not charging, you can press a small button and get a color indication:

I guess the real question is how do the UFZ100 batteries compare to the original Sony NP-FZ100 cousins. My quick answer is “pretty well”.

The form factor is identical so the UFZ100s fit anywhere that the NP-FZ100s would fit, though the Nitecore variant does not have the nice hologram 😉 Both batteries also weigh the same, 82.5 grams.

I have had a set of those batteries for a month, and I see no degradation in capacity. Of course, this may change in a few months, but for now, I am happy.

Lastly, my only “real” grievance with the UFZ100 is that it has no print on the back. The Original sony has a nice white arrow showing the direction in which the battery goes. The Nitecore has a small arrow bevel that is hard to see when it’s dark and I had often inserted the battery in the wrong way, only to take it out, flip it, and put it back in again. (Thank god, the USB-C charging port is direction agnostic).

Price-wise, this is not even a fair fight, the UFZ100s run for $59.95, including the USB-C port and the indicator light. The Sony’s run for $78.00. (you could buy other third-party batteries for cheaper, but those won’t have the USB port and charging indicator. So up to you if you want these features (hint: yes).

The Nitecore UFZ100 sits right in between the budget 3rd party sony battery, and the original Sony. If you are looking for a lighter travel and less cables and charger to manage, the extra price si definitely worth the cost.

3D Printed Camera Pistol Grip is Inspired By Soviet Spy Equipment
Rode’s New VideoMicro II is Totally Redesigned for Better Performance
My Favorite Photography Deals of the Holiday Weekend
Artist Deal Alert: Save Big With Up To 30% Off Xencelabs Digital Drawing Gear
What is Rembrandt Lighting and How to Use It for Portrait Photos