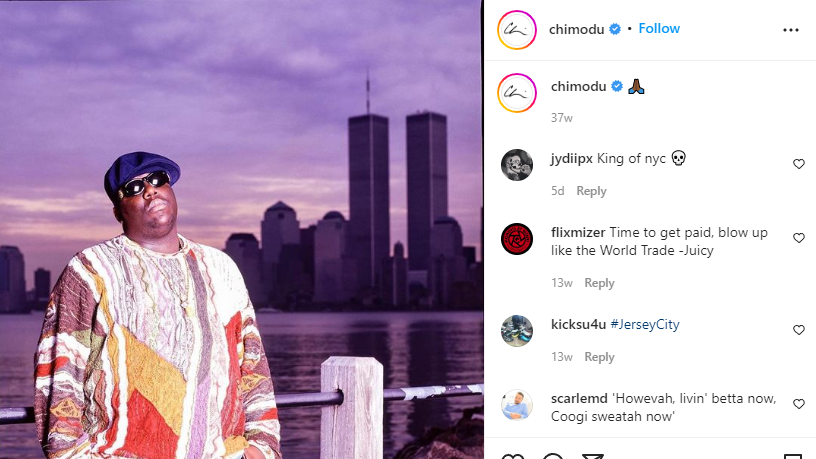 Biggie Smalls estate (Notorious B.I.G., LLC) has filed a lawsuit against the wife of the famous hip hop photographer Chi Modu. According to Biggie’s estate, the late photographer’s wife should stop selling merchandise with the famous rapper photos. They claim it violates their right to publicity, even calling Chi Modu “a parasite.”

Biggie Smalls or The Notorious B.I.G. is considered to be one of the greatest rappers of all time. Similarly, photographer Chi Modu was a superstar among the 1990s hip hop photographers, forming the visual identity of the rap scene of the time. Modu photographed Biggie in 1996 in front of the World Trade Center, creating one of the most iconic shots of the rap star.

The famous rapper passed away in 1997 and his estate was set up by Christopher Wallace’s (a.k.a Biggie Smalls) mother and wife. Chi Modu passed away last year, and the legal battle seems to be going on between him and Biggie’s estate for around three years now. The estate sued a Swiss-based company Yes. Snowboards and Chi Modu in 2019. They cited the same issue back then: the estate claimed that Yes. Snowboards was selling snowboards with Modu’s photo of Biggie “without ever asking for permission or paying a dime.”

Then in 2020, Chi Modu filed a suit against Notorious B.I.G., LLC. According to the court documents, he refused to license his copyrighted photo of Biggie to the estate at below-market rates, and this led to the estate bringing a trademark action against him and his associates.

According to Courthouse News Service, Sophia Modu says that her husband had been licensing his photos of Biggie to others since the 1990s. This includes the star’s own marketing company. She claims that there had been no issue until he asked for more money from them in 2018. According to this source, Modu was receiving only $3,000 per photo per year from Biggie’s heirs, while they were reportedly making “hundreds of thousands of dollars” from the photos he licensed to them. “It makes my blood boil,” Modu’s lawyer Ross Charap said. “This man helped make Mr. Wallace a legend. There’s no doubt about it.”

“Today [the estate] spends a tremendous amount of resources and time to maintain Wallace’s legacy and the value of his brand name, and has licensed trademarks, the right of association and sponsorship, and the right of publicity to the name, image, voice, signature, and likeness of the late Wallace (collectively, the “Property Rights”) in connection with apparel, headwear, novelties, alcoholic and non-alcoholic beverages, toys, mobile games, posters, and a variety of other products.”

On Chi Modu’s website, you can find various items with his photos: prints, posters, postcards, shower curtains, and skateboards. Naturally, some of these products include the photos of hip-hop stars that he took. Apparently, the ones with Biggie’s photo pose a problem to his estate.

The lawsuit wants to prevent Sophia Modu “from continuing to sell unauthorized products bearing Biggie’s name, image, and likeness.” The estate claims that she is selling “unauthorized products,” which causes “irreparable harm to the Biggie brand name and the reputation of products marketed under the Property Rights.” Other than tangible goods, Modu also sells NFTs, which “unlawfully commercializes Biggie’s publicity rights without authorization.”

As Hip Hop DX reports, the estate went as far as calling Chi Modu “a parasite” for selling merchandise with his own photo. This happened before his death, and Modu said that it was the first time he was sued in his 30-year-long career. “Usually the copyright holder sues people for infringement on their copyright,” Modu said at the time.

“This is a situation where a subject is trying to sue a copyright holder for using their legally, federally, copyrighted creation. So, it’s completely backwards. And the main reason for the suit, it’s very clear to me. It’s to scare artists and creatives out of their rights.”

This isn’t the first time there’s confusion (let’s call it that way) about the photographer’s rights. Earlier this year, Snoop Dogg, said that “mother****ing” photographers shouldn’t own the copyright of the celebrity photos they take. As for the Biggie estate vs Sophia Modu vase, the U.S. District Judge John Kronstadt still hasn’t ruled in favor of anyone. He has urged both parties “to consider sitting down with a mediator to try to resolve their conflict,” as PetaPixel writes.

Really Right Stuff’s PG-02 MKII is a High-End Pano-Gimbal Tripod Head
Questmas Time is Here!
Photographing the Antpitta: My Favorite, Elusive Bird
How to Optimize Photoshop for Panoramas and Huge Files
The Loupedeck Live S is an Easy and Affordable Streaming Controller