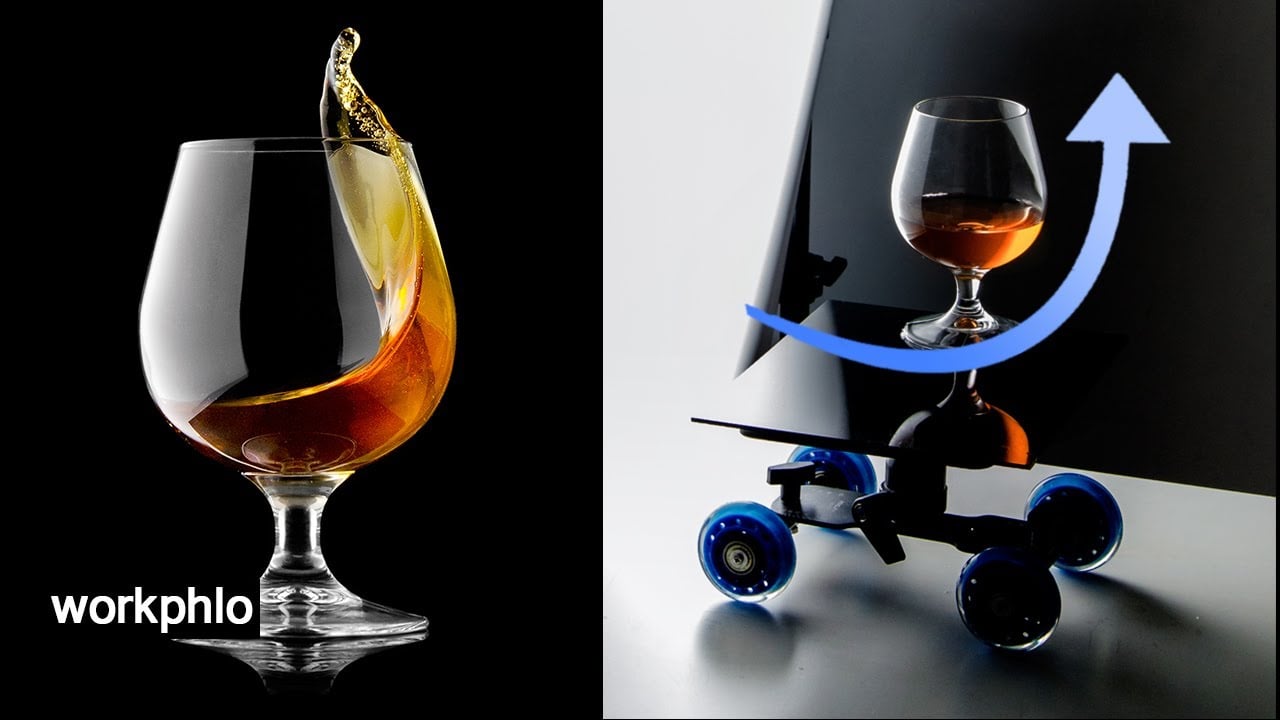 There are plenty of ways to photograph drinks, glasses, and bottles. Dustin Dolby from Workphlo has guided us through many of them in his great video tutorials. But this time, he shares something that looks like a lot of fun and adds motion and dynamics to your beverage photos.

Using cheap and simple dolly, you can create splash photos in the studio with minimum gear. So, let’s dive in and see how Dustin got his shot: from shooting all the way to the final edit.

For this shoot, Dustin used a KINGJOY VX-103 slider dolly which costs $26. So, it’s not a major investment if you’re planning on buying one. It has a light stand attachment, and he added a surface support plate and black acrylic for some nice and elegant reflection.

Dustin recommends you use a large and diffused light source, and make it larger than you think you’ll need. In the video, you’ll see him using a speedlight with an 8 x 36” stripbox, but he adds extra diffusion in front of it. He later adds another speedlight at the same angle as the one with the stripbox, but feel free to experiment with lighting if you decide to try this yourself.

When you’re happy with the lighting and composition, let’s get to the fun part: the wheels. Once you set everything up, pour the beverage and move the glass on wheels left and right, capturing the shots. There will be a few attempts before you get the splash you like, but that’s the fun of it.

For his final shot, Dustan used two shots that he combined in Photoshop, and he guides you through this process as well. Of course, you don’t need to replicate it to detail, but you may find it useful if you decide to give this a shot yourself.

This is a pretty simple setup as is, but I imagine it being DIY-ed with your child’s toy car. I don’t have any kids, but I might ask my nephew to borrow me one of his toy cars so I can try making a dolly out of it. We’ll see how it goes. 🙂