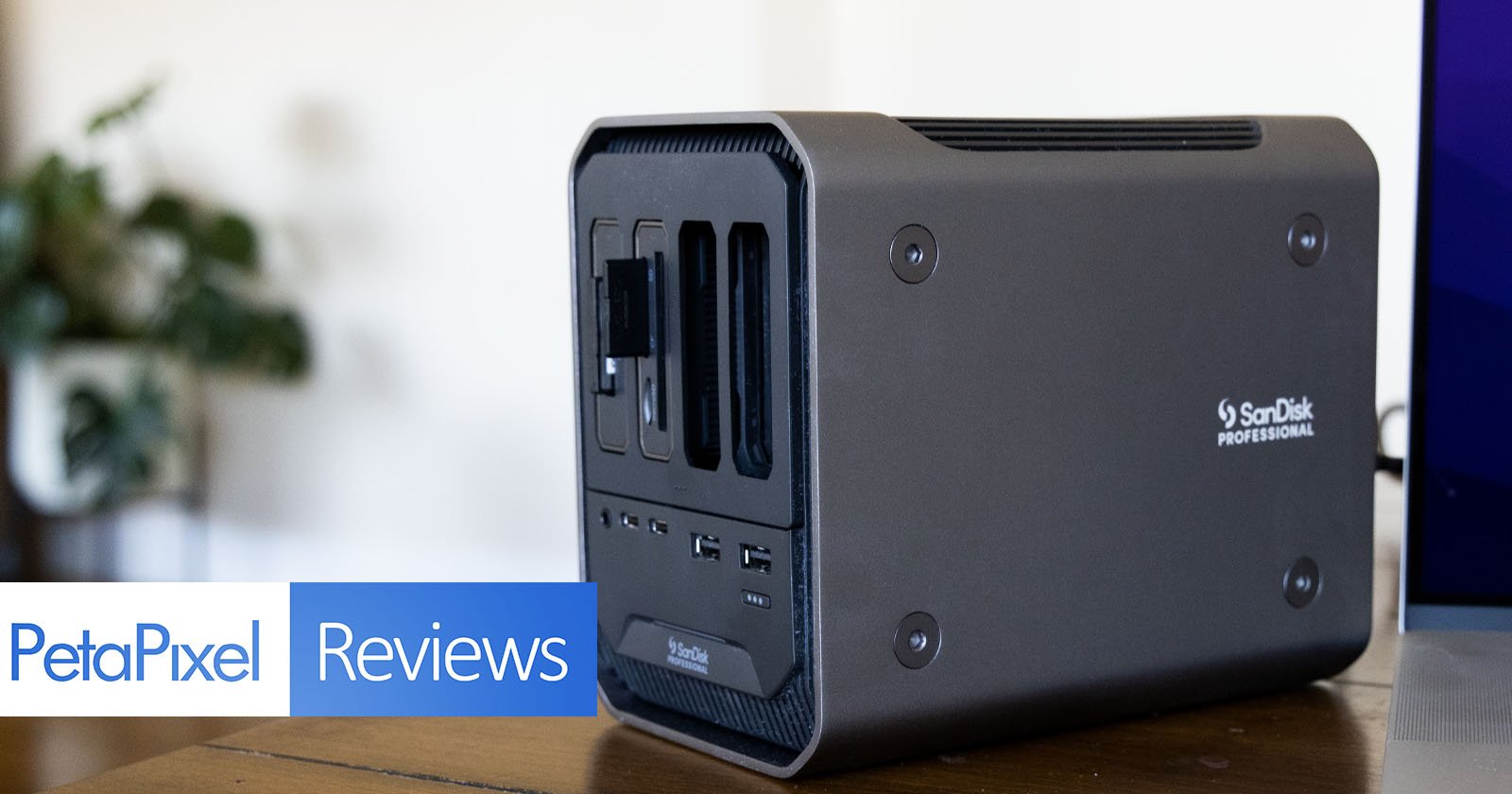 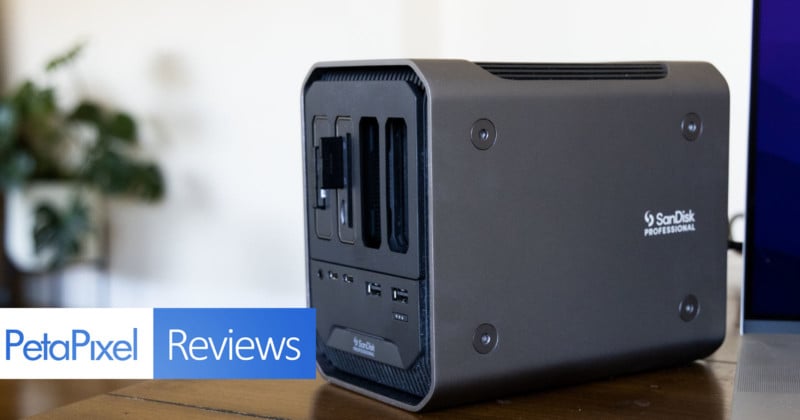 Photographers and videographers who shoot large campaigns leave sets with a ton of data that needs to be ingested, backed up, and organized for editing. For successful businesses, one measly SD card slot on the back of a computer doesn’t cut it. For them, a multi-card ingestion device is a must, and right now the SanDisk Professional Pro-Dock 4 is absolutely unbeatable in that department.

For the better part of five years, I relied heavily on my Lexar Pro Workflow Hub HR2, the second generation four-port memory card ingestion device that I have heaped praise on in the past. Every shoot day would end with me at my desk and all of my memory cards emptying into my RAID array at four times the speed that it used to take me. SD, microSD, CFast, it didn’t matter: all cards could be plugged in and ingested simultaneously.

But after those five years of work and hundreds of terabytes ingested, my beloved Lexar Hub began to falter. I went to replace it only to be met with a grim reality: it was no longer being manufactured. I searched for a solution to take its place, but Lexar was no longer Lexar and no one was producing something that I felt would fit my needs. 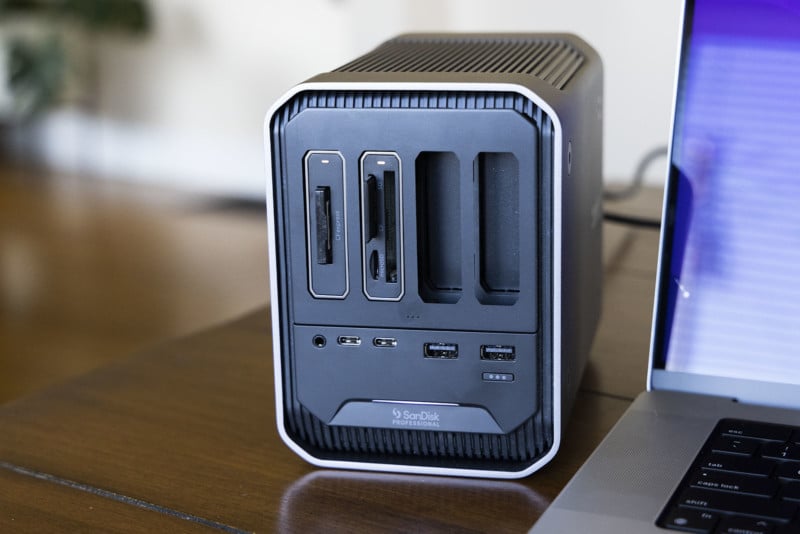 That was, until SanDisk announced an option last year. It took some time to finally get my hands on it (global supply shortage and all), but it’s here, and I have never seen a better ingestion machine than what SanDisk has put together here.

It’s not cheap at $500 and that’s before you pick up the modular card readers you’ll need to take advantage of it, but everything that was great about the Lexar Pro Workflow Hub is here and more, upgraded and renewed for the current generation of computers and pumped up to 11.

More Than Just a Card Reader

The Lexar HR2 used Thunderbolt 2, a plenty-fast solution that has since been replaced with the even faster and better Thunderbolt 3, which shares a form factor with USB-C. As I move away from the computers that I edited on for years, I’m also leaving behind Thunderbolt 2. The SanDisk Pro-Dock 4 joins me in that future and has two Thunderbolt 3 inputs on the rear of the device that allows for daisy-chaining to a full Thunderbolt 3 system. 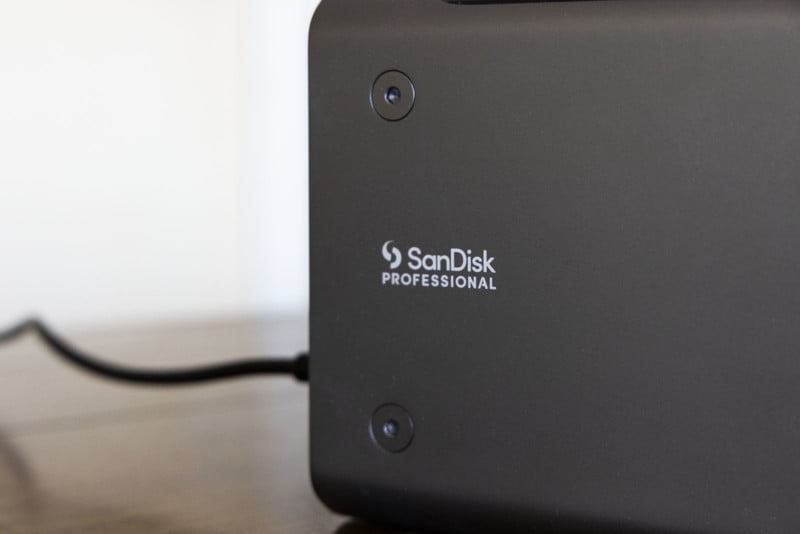 While this matches the connectivity options from my old Lexar HR2, SanDisk did not stop there. The company seems to have seen the benefit of this device as more than just a card reader or ingestion machine and decided that, while it was already making this, why not also turn it into a hub of sorts. To that end, the Pro-Dock also has a DisplayPort 1.4 input and a gigabit ethernet port which can be connected to a computer through the Thunderbolt 3 ports I previously mentioned. 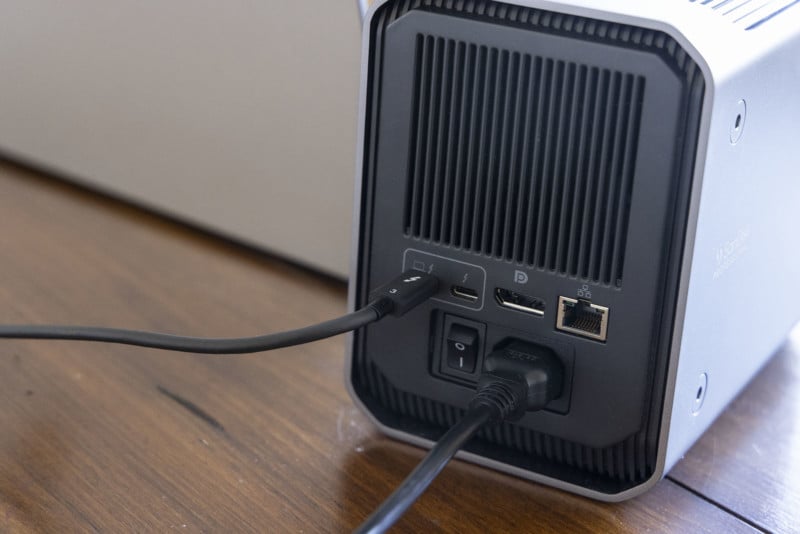 The front of the Pro-Dock is just as impressive. In addition to the four modular bays that house the individual readers (more on that shortly), it also has two USB-A, 5 Gbps ports and 2 USB-C 10 Gbps ports as well as a headphone jack. SanDisk seems to have recognized that Pro-Dock isn’t small (it’s about the depth of two of those Lexar Hubs and significantly heavier), so it decided to make the most of needing that space by providing more options for connectivity. I’m totally on board with that.

One more thing: those two Thunderbolt 3 ports provide up to 87 watts of power, which can charge compatible computers and devices. If it wasn’t clear yet, the Pro-Dock itself does require power in the form of its included 260-watt cable. It is also both Mac and PC compatible.

The real magic of this type of system is the aforementioned modular port and reader system. The Lexar HR2 worked in a similar manner. Rather than a set card reader, this system allows for a plug-and-play solution that can be specifically tailored to a particular photographer’s workflow. If you don’t use SD cards, you don’t have to get the readers for those. If you do now but in two years have moved on to CFexpress, you don’t need to replace the whole unit, you only need to get the modular insert. 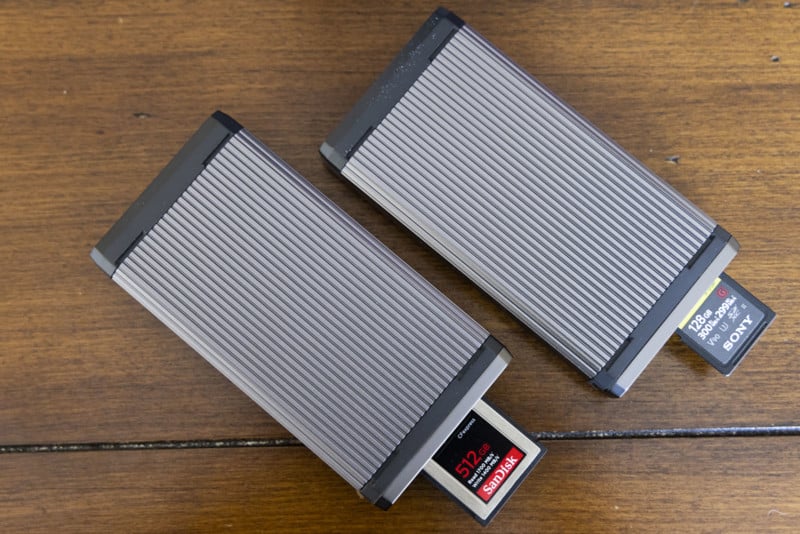 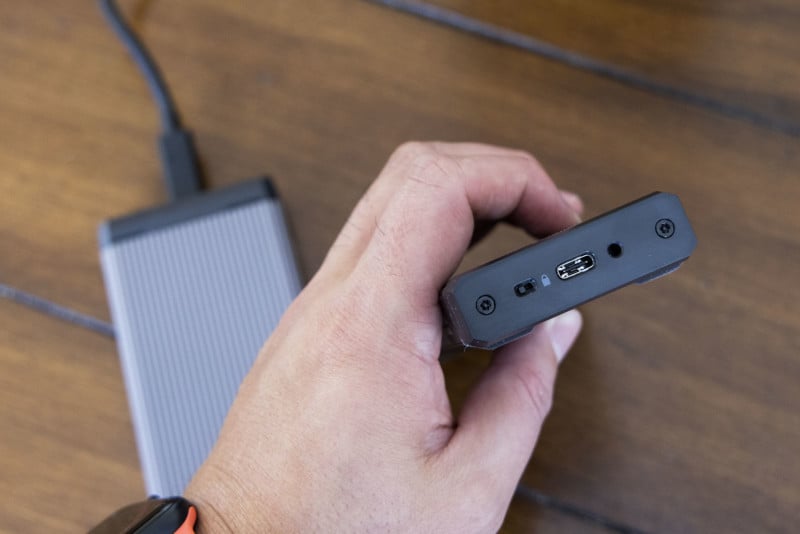 These modular inserts aren’t stand-alone, either. They use a USB-C interface that lets you pull a reader out when you’re about to hit the road and use it as a travel card reader as well. These readers are pretty beefy in size, but they prevent waste and allow a photographer to pare down what is very likely a rat’s nest of cables and readers in their desk. 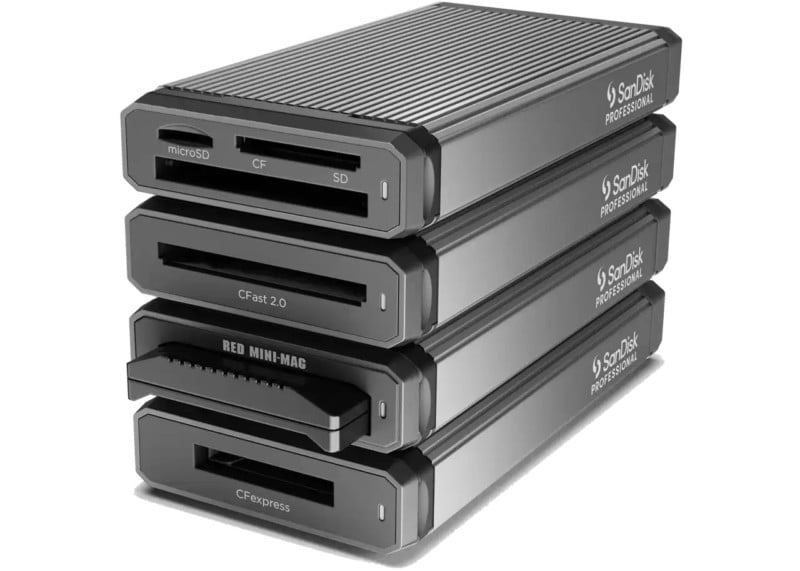 At the time of publication, SanDisk only makes four modular inserts: a “multi-card” reader (one microSD, a CF, and one UHS-II SD port), a CFexpress Type B reader, a CFast reader, and a RED Mini-Mag reader. SanDisk could eventually make SSDs that fit in these modular ports (like the Lexar HR2 did), should consider CFexpress Type A reader, and I would love to see a multi-SD card reader (two ports in one would be great) but for now, most will get what they need out of the current options.

For the most part, SanDisk did not cut corners with the build quality of the Pro-Dock 4. This guy is heavy and features a plethora of metal parts. It has a built-in fan that only kicks in during extremely taxing ingestion workloads, so the fact it’s pretty loud is only a minor nitpick against the device. It is, however, pretty loud.

The front of the Pro-Dock 4 where the cards go is overly complicated. I imagine this was done to prevent you from accidentally pulling a reader out, but there is a rather flimsy plastic hinge that has to be opened in order to insert a new modular reader and presses closed to keep them in place. I really don’t think this was necessary since the readers themselves also have a metal pull-tab that you really have to use since they are so closely crammed together, you can’t easily remove them from the dock by accident. That plastic cover is really my only complaint from a built perspective, mostly because it feels really low quality. If I’m not careful, I’ll break it right off. It’s an unfortunate smudge on an otherwise high-end build.

SanDisk says that it designed this dock to be used not just on desks, but also on digital tech cards on production sets. That’s why it’s larger, heftier, made with metal parts, and features so many connection options.

One major difference between the Pro-Dock 4 and my old Lexar HR2 is that the Pro-Dock requires software to work correctly, at least on macOS. Without the software, my MacBook Pro with M1 Max wouldn’t recognize even power coming from the Pro-Dock.

Luckily, it’s a pretty non-intrusive affair that provides some helpful insight and functionality. The Pro-Dock Utility is available on the Mac App Store and allows the device to correctly work with an Apple computer and also shows the fan’s RPM, the temperature of the power supply, CPU, and reader bay individually, and allows you to control the brightness of the LED on the dock. You can also eject either all the devices plugged into the Pro-Dock or just the memory card readers from the software. When using the eject button on the front of the Pro-Dock (it’s the button just below the right-most USB-A port), the software tells you that is happening as well.

With SanDisk Professional’s Pro-Dock readers, you can unload simultaneously from multiple memory cards at once, which dramatically saves time in the ingestion phase, especially if you have hundreds of gigabytes of footage to deal with. While the readers themselves aren’t any faster through USB-C (I checked), the benefit of the dock is the fact you can take full advantage of the bandwidth of Thunderbolt 3 and pull footage at blazing fast speeds all at one time.

The reader works really well. I tested a few memory cards and got as good or better performance than I’ve been getting with dedicated readers that I’ve had to use since my Lexar Hub gave up the ghost. Below are two examples, one a Sony SD UHS-II card and the other a SanDisk CFexpress card.

I can empty these cards simultaneously extremely quickly which means I don’t have to sit there and swap cards in and out after each one finishes; I can just do them all at the same time. 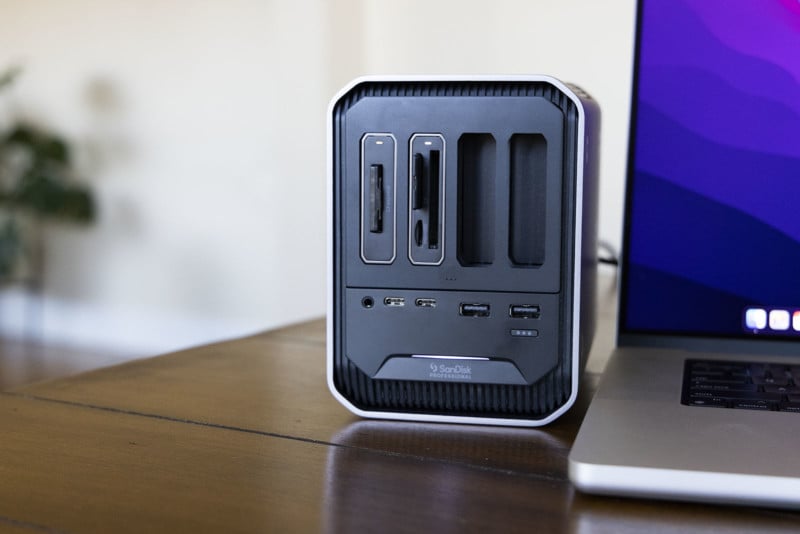 The SanDisk Pro-Dock 4 is a significant upgrade over my previous favorite ingestion device at $500. That’s $300 more than the Lexar Pro Hub HR2 retailed for and that’s before adding up to four modular readers that start at $80 but can be as much as $200 each. That’s no small amount of investment, and while I did not experience any issues during my testing, some user reviews mention that the software can be spotty at times and that PC workflows aren’t perfect. For a very expensive, premium device, this isn’t super encouraging to see. That, and the cheap plastic bits on the front of the Pro-Dock suck a bit of wind out from what is otherwise my dream ingestion machine.

But given the dearth of options out there that do exactly what this does, I’m down to say it’s still the best option for heavy-duty, high-volume photo and video ingestion. Using the Pro-Dock 4 has been a dream and the fact that it goes above and beyond what Lexar once gave us is something I really appreciate. The amount of time this saves is a godsend.

There are a plethora of options that do some of what the Pro-Dock offers, but nothing that can do it all. OWC has a Thunderbolt 3 dock that features CFast and SD readers, but they aren’t modular and it’s more of a dock than an ingestion center. Delkin makes a multi-slot CFast, SD, and microSD reader, but it’s much slower thanks to relying on USB 3.0, and is again, not modular. I really like ProGrade Digital’s card readers (there is an SD dual-slot reader and a CFexpress Type A and SD dual-slot reader, among others), but they don’t solve the problem with needing one place to ingest a lot more footage from a variety of card types.

If the multi-card reading, modular nature of the Pro-Dock 4 is what you find most appealing, like I do, then there really is no good alternative.

Yes, but only if your workflow necessitates ingestion of a lot of footage from multiple memory card types. If you’re just shooting one card type and you only need one or two memory cards per gig, then the Pro-Dock 4 really isn’t for you. But if you were like me and shooting photo, video, drone, and timelapse all in one job and burning through 10 plus memory cards per gig, then your money will be well spent with the amount of time the Pro-Dock 4 will save you.

Photographer Larry Chen on Capturing Rally Driver Ken Block’s Life and Career
Rode’s NTH-100 headphones are now a headset with the new NTH-Mic microphone
How to Develop B&W Film at Home: A Simple Guide for Mere Mortals
Man orders $3,000 Sony a7 IV, gets a box of white powder instead
RODE Adds Optional Broadcast-Grade Mic to its Studio Headphones