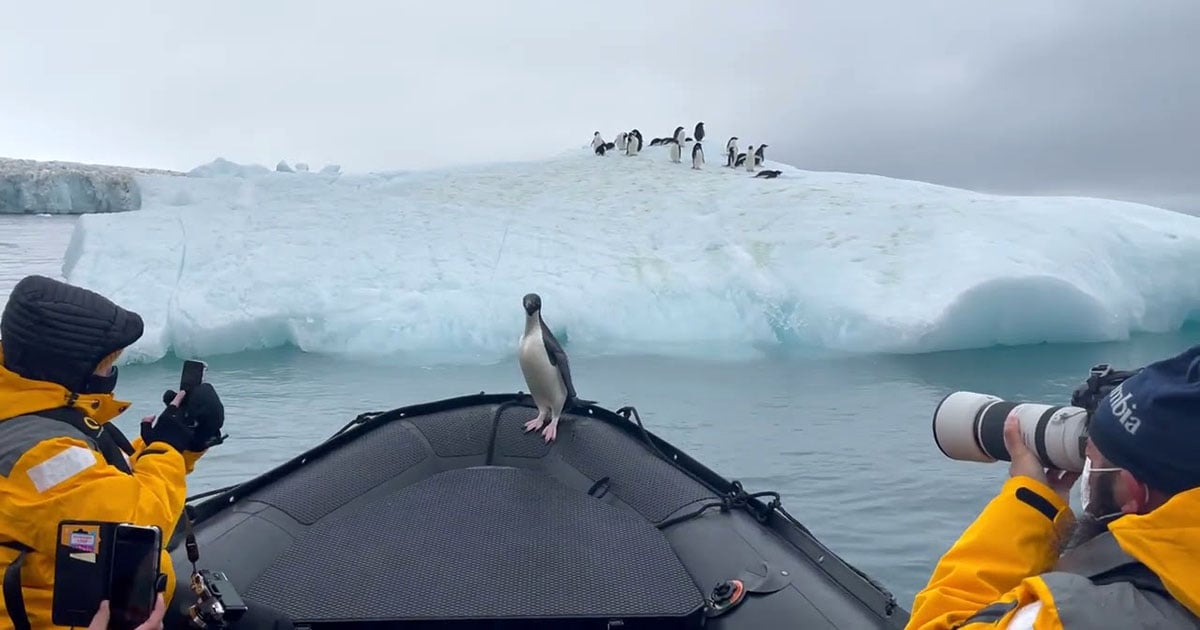 A group of photographers shooting from an inflatable boat in the Antarctic recently got closer to their subjects than they had expected to when a terrified penguin jumped into their boat to escape a hungry leopard seal.

The unusual scene that transpired on December 28, 2021, was captured in this 1-minute video by Russian wildlife photographer Vladimir Seliverstov, who was a passenger on the boat.

A Ride that Saved a Penguin’s Life

The penguin is seen standing at the bow of the Zodiac, unwilling to go back into the ocean while at the same time hesitant about the fact that so many humans are staring at it from such a close distance with cameras pointed at it. In the end, though, it decided to take its chances with the friendly yellow creatures rather than risk becoming a meal for the seal that was pursuing it.

After enjoying a short boat ride to a nearby iceberg, the penguin hopped off and waddled over towards a group of penguins.

“Adelie penguin jumped into our Zodiac while we were cruising around an iceberg,” the 50-year-old photographer says. “He was escaping from a Leopard Seal and didn’t want to go back into the water so we decided to take him to the iceberg where his friends were waiting.”

The photographers were delighted by the surprise encounter during their expedition.

“I have been photographing wildlife for more than twenty years,” Seliverstov tells the Daily Mail. “I’ve never experienced something like this before but some of my friends have.

“Penguins can be quite comfortable with humans but not all of them. My friends and family have all loved the video.”

The photographers came across this particular group of Adelie penguins in Brown Bluff, a volcano on the Tabarin Peninsula of northern Antarctica.

Adelie penguins are only found in Antarctica, and as the most widely spread species of penguin, they can commonly be found all along the entire coastline of the continent. They were named after Adèle Dumont d’Urville, the wife of French explorer Jules Dumont d’Urville, who was the first to discover the species back in 1840.

Despite their cute and cuddly appearance, the penguins are actually fearsome predators themselves.

“Penguins may seem cute to us, but they’re excellent predators and very efficient foragers,” WWF writes. “Adelies have a feisty attitude too. They’ve been known to take on potential predators – seals or large seabirds – or even attack visiting researchers with their flippers.”

One of the penguin’s main enemies in the Antarctic is the leopard seal, which waits at the surface near the water’s edge for penguins to jump in. When a penguin does enter, the seal will catch its prey by the feet and repeatedly beat the penguin against the ocean’s surface until it is dead before feeding on it.

It is estimated that there are around seven million Adelie penguins alive on Earth, so from a conservation standpoint the penguin is a species of “least concern,” but the penguin Seliverstov encountered is surely happy to still be alive and part of that number.

✨ Match Skin Tones From Another Photo in Photoshop
Using the AstrHori 18mm f/8 Low-Cost Shift Lens
‘Lunchbox’ Replaces Photographers as the First AI Image Generator for Food
🔥 Change Hairstyles and Swap Hair in Photoshop!
7 ways to make the most of your location and create content that sells