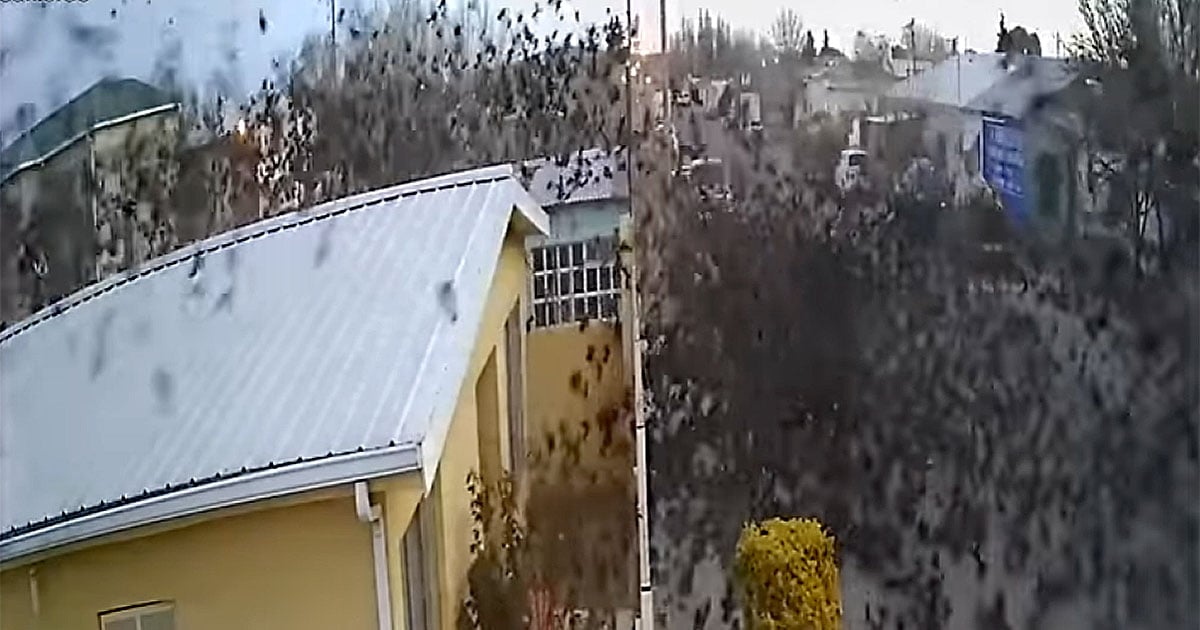 A bizarre wildlife incident was caught on camera in Mexico, and the viral footage has experts scratching their heads. It shows a large flock of hundreds of birds falling out of the sky and slamming into a neighborhood street below.

Local newspaper El Heraldo de Chihuahua reports that the event occurred on the morning of February 7th in the northern Mexican city of Cuauhtémoc and involved a flock of migratory yellow-headed blackbirds (Xanthocephalus), which breed in the United States and Canada and migrate south to Mexico in the winter.

A 1-minute clip captured by a security camera shows the flock plummeting like a dark cloud and hitting the pavement. While a large number of the birds eventually shake off the impact and fly away, scores of birds died and were found scattered around the area.

Theories About This Puzzling Wildlife Footage

While the cause of the mass bird death remains unclear, experts have put forth a number of theories that could explain what happened, the Guardian reports.

People on social media even guessed that the flock was somehow disoriented due to 5G, a widely circulated falsehood about the cellular technology that has been debunked by the likes of the National Audubon Society and UNICEF.

One expert, ecologist Dr. Richard Broughton of the UK Centre for Ecology & Hydrology, tells the Guardian that he is 99% sure the flock was trying to escape a predatory bird and had been chased into the ground.

“This looks like a raptor like a peregrine or hawk has been chasing a flock, like they do with murmurating starlings, and they have crashed as the flock was forced low,” Broughton says. “You can see that they act like a wave at the beginning, as if they are being flushed from above.”

Experts also say that because flocking birds may follow the flight patterns of nearby birds instead of being aware of the landscape around them, tightly packed flocks may sometimes risk colliding with structures or even the ground.

A similar incident occurred in December 2019 in the UK when roughly 225 starlings were discovered dead on a back road. Postmortem examinations of the birds concluded that they had likely died from impacting the ground while evading a predator.

“There was no content of avian flu, and […] there was no poisons found in the animals,” said Rob Taylor of the North Wales Police’s rural crime team in a Twitter video. “The vet who conducted the inquiry has confirmed that the injuries and death of the birds was caused by the birds striking the tarmac or the nearby bushes, and probably consistent with the birds avoiding either severe weather or a raptor in the area.

“I hope that this will put a line under this. […] It’s quite a common phenomenon that happens all around the world.”

It is unclear just how “common” this phenomenon actually is, but the viral footage now circulating on the Web is an extremely rare case of it actually being captured on camera.

Man orders $3,000 Sony a7 IV, gets a box of white powder instead
Prepare authentic photos of LOVE for Valentine’s Day 2023
The Power Junkie v2 Can Power Three Devices from One Sony Battery
UV Filter: Should You Use One on Your Camera Lens?
‘Lunchbox’ Replaces Photographers as the First AI Image Generator for Food