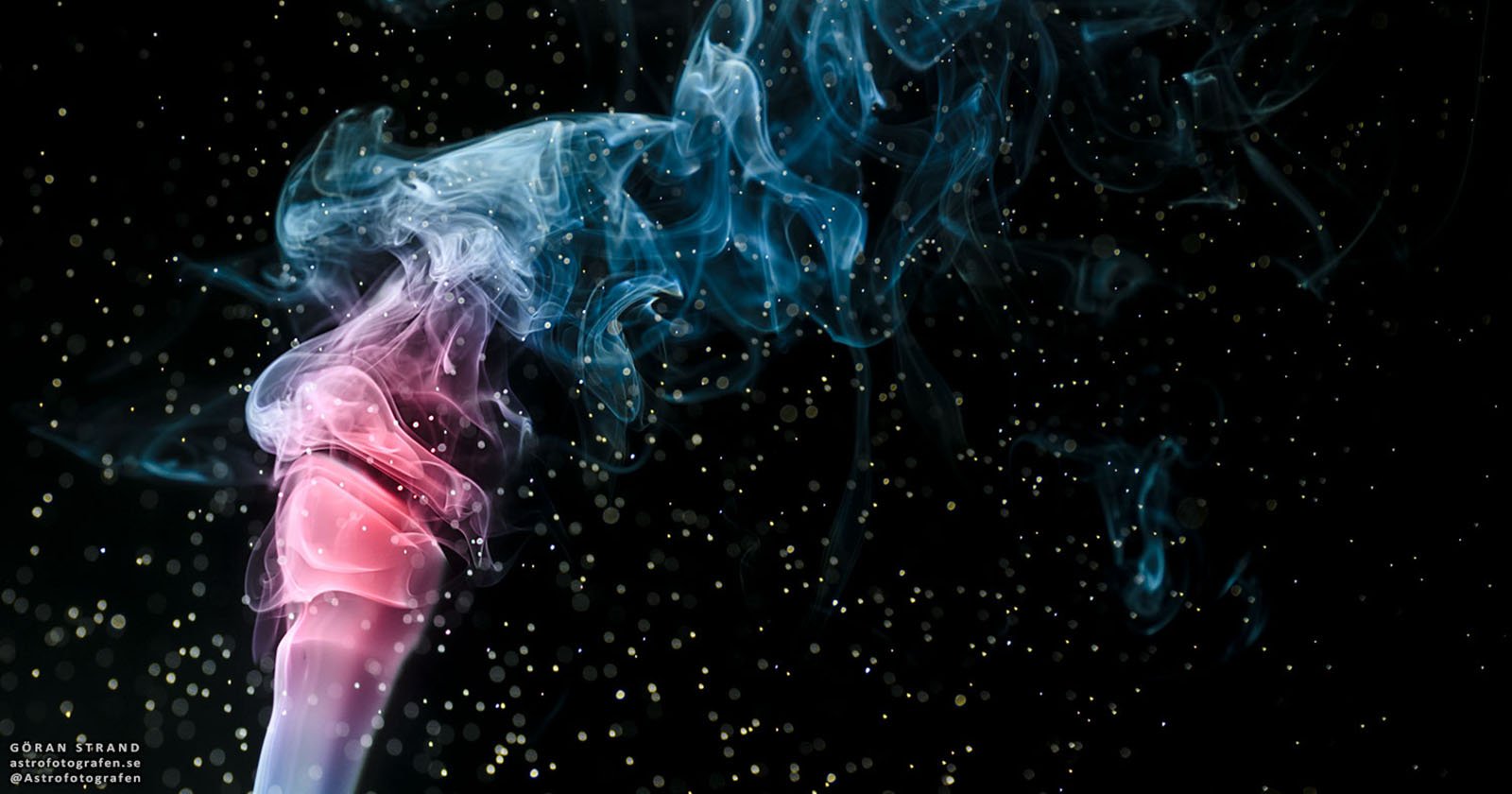 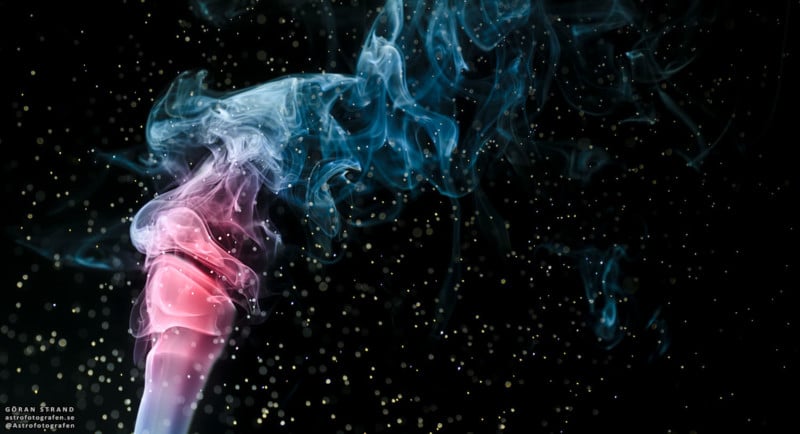 During long periods of cloudy weather, it can be really frustrating as an astrophotographer to wait for the sky to clear up. Over the years, I’ve learned how to handle these long downtimes.

It’s a good time to look back on your old work and see if you can do something new with old images. Or you could spend your time creating your own space art in the comfort of your home or studio.

I previously saw some smoke photography and really liked the shapes and structures that take form in the smoke. I thought it could be a great idea to use that smoke and try creating some “space nebulas” with them. After giving it some thought, I came up with the idea of using water in a spray bottle to produce the stars. My idea was that a flash could light up the water droplets to have them look like small bright dots.

After some trial and error, I think it turned out quite well. Here’s a brief rundown on how I achieved this effect.

The Equipment and Setup

First, let’s look at the setup with all the gear I was using.

I used two flashes remotely triggered from my camera and the other one as a slave. My camera settings were 1/125s, ISO 400, and a focal length of 40mm at f/4.

In the photo above you can see I’m using a black backdrop to get a black background in the image. The flash in the top left corner is used to light up the water droplets. I’m using a snoot on that flash so I don’t get any light on the background.

In the bottom right corner, you can see my second slaved flash placed behind the incense to light up the smoke from behind.

Here’s a close-up of my tripod holding the incense and my secondary flash behind it. I’m using a black cardboard plate to block the light from the flash from my background. I only want the smoke and the water droplets to be lit up by this flash.

Now it’s almost time to take the photo. Before you start taking photos, light up the incense and wait for the smoke to settle a little bit so it is more or less traveling in a straight line upwards. You need to be in a room free from wind gusts since even the lightest of gusts will blow your smoke around, and that will give you less interesting structures in the smoke.

When the smoke is ready, fire off the spray bottle to produce some water droplets raining down on the smoke. When the droplets reach the smoke, you should take the photo. You want the droplets to mix with the smoke. Now just keep repeating this procedure and look for interesting formations in the smoke to take photos of.

Since the incense is glowing slowly, it will produce some ashes, so please put something non-flammable under your tripod holding the incense. I’m using a wet towel but anything that won’t catch fire will do.

When you’re done photographing it’s time to start editing your photos, and here is where your creativity comes into play. I usually go through all the photos to see which ones have some interesting structures and stars in them. Below you can see two photos, the first one is how the photo looked straight out of the camera and the second one is after I’ve done some processing on it.

One tip, though, is to try to keep the color of the stars close to white or grey — if they are too saturated with different colors it will look kind of strange and not very space-like.

Below you can see some examples of different photos I went on post-processing from my last session in my studio. The last image is just smoke without any water droplets in it. 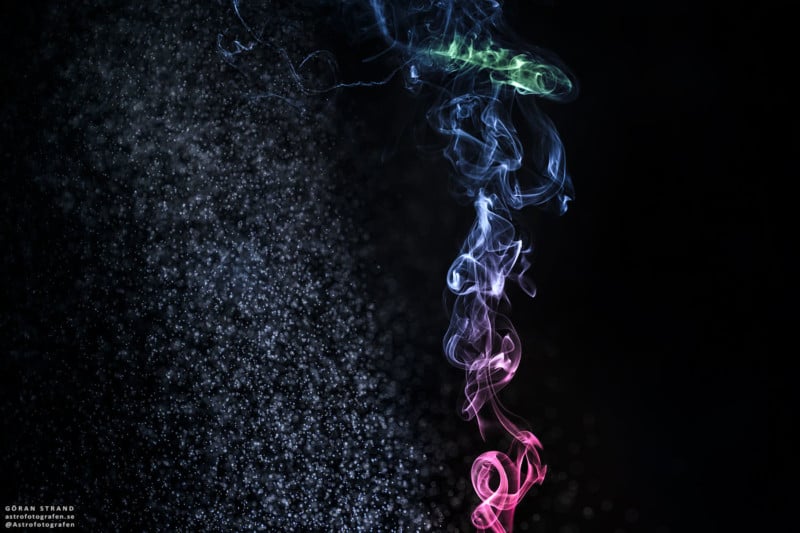 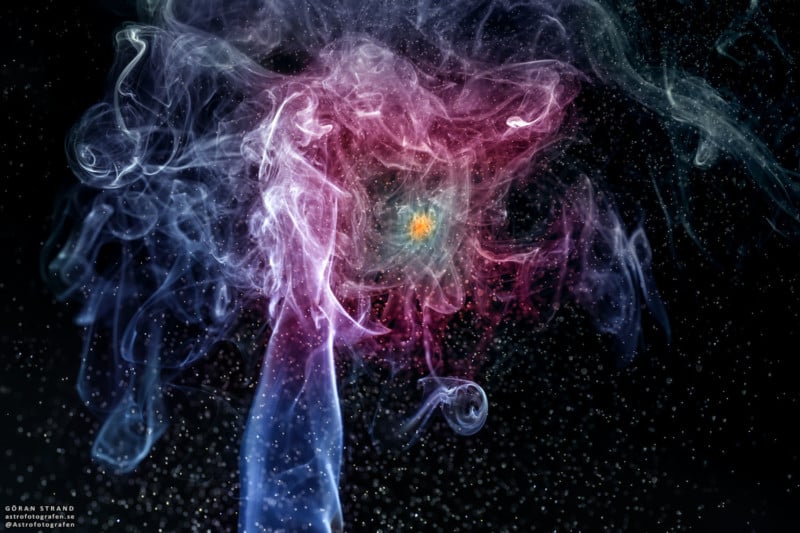 Good luck with your creation of space art!

P.S. You can follow me on Instagram and/or TikTok for behind-the-scenes looks at the latest photo project I am doing.

About the author: Göran Strand is a professional photographer from Östersund, Sweden, with a passion for astronomy. The opinions expressed in this article are solely those of the author. You can find more of Strand’s work on his website, Instagram, Twitter, and Facebook. This article was also published here.