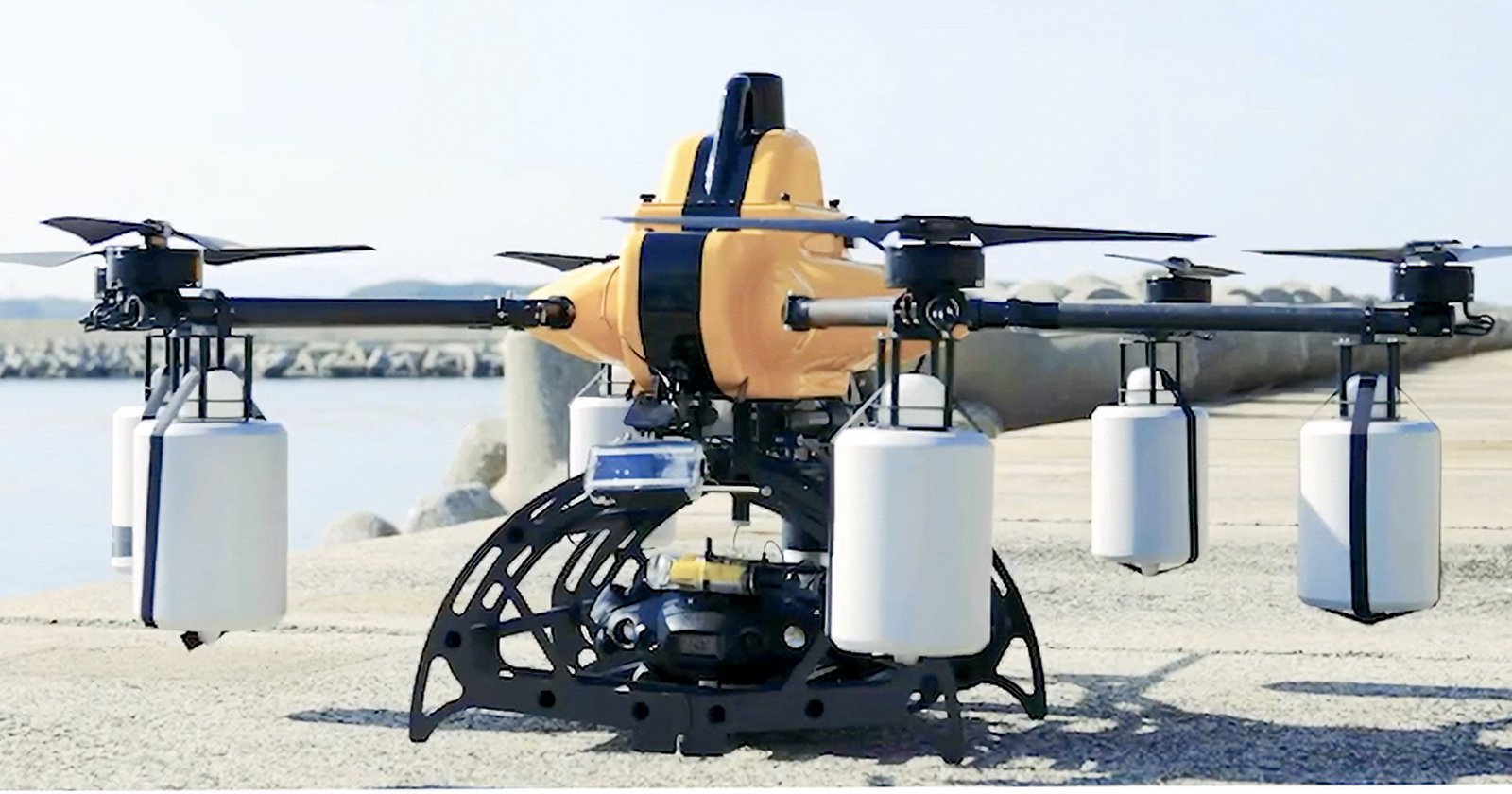 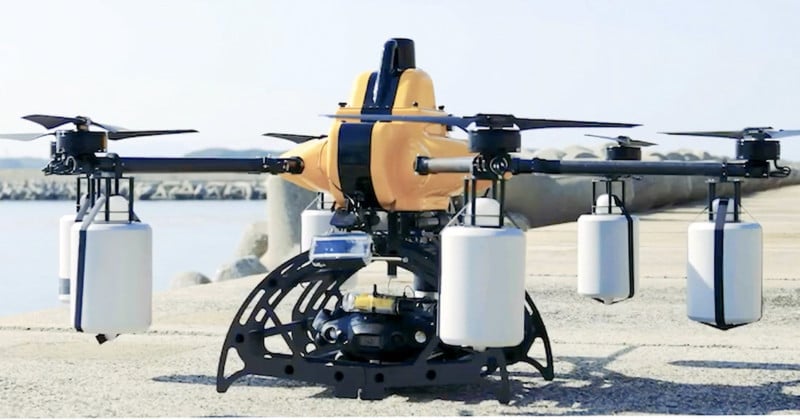 The drone features a combination of a heavy-duty aerial drone and an industrial-class underwater remote-operated vehicle (ROV) and is the result of six years of development. KDDI and QYSEA say that their combined efforts have resulted in the first commercial drone that is capable of operating seamlessly through land, sea, and air.

From Over Land, to Under the Sea

The idea of a drone that can fly through the air and then dive underwater isn’t quite what the team has actually created. While the six-roter drone can indeed fly over land and sea and actually land on water, underwater navigation is done through a separate, connected ROV while the flight unit floats on the surface. Specifically, it uses long-range mobile communications to remotely fly to its preset route at sea and after landing, the ROV unit is released and deployed for undersea work at a maximum depth of 150 meters (about 492 feet).

There are still major advantages to this kind of drone, however. Once the drone has flown out to sea, the pilot is able to remotely operate the ROV from a safe working location and perform a variety of inspection, maintenance, and repair work underwater. Sometimes it might not be safe or even possible to get out to sea to deploy a drone by hand, which makes the drone particularly useful in those cases.

The companies say that their “Sea-Air Integrated Drone,” which thus far has no other name, has shown it will have far-reaching applications across the various marine-based industries.

“In offshore wind power, the drone can be deployed to perform complex inspections and maintenance work on its frames and foundations to greatly reduce human risks,” QYSEA explains. “In the world of aquaculture, the drone can fly out to monitor its livestock and crops, as well as perform maintenance and repair work through the ROV’s multitude of add-on tools. Other marine-based applications include operations involving search and recovery, hull inspections, and various other subsea infrastructures.”

Equipped with a 12-Megapixel 4K Camera

The flight drone isn’t designed for creative image capture (although it does appear to have some navigational cameras and at least one down-facing camera that can monitor the ROV from the surface), but the underwater ROV unit is equipped with a 12-megapixel 4K UHD Camera with a 1/2.3-inch Sony CMOS Sensor. QYSEA was not able to provide PetaPixel with example photos taken with the drone, saying that presently visuals are limited.

That said, the company indicates that the ROV is a modified version of its Fifish V6 Plus, which the company has featured multiple times on its YouTube Channel.

The device is clearly made for more practical use cases, but the technology could find its way into creative devices designed to capture both aerial and undersea footage for the purposes of art. QYSEA, for example, already produces a line of underwater ROVs capable of much better image quality. The Fifish P3 underwater robot, for example, features a 20-megapixel 1-inch sensor and can capture 4K video.

The P3 is just one of several underwater drones produced by QYSEA, many of which feature far more advanced visual capture capabilities than found on the sea-to-air drone.

If there is demand for it, there is little that holds back QYSEA and PRODRONE from producing an air-to-sea product for the purposes of photo and video capture. Whether the two companies plan to do so, however, isn’t clear.

🦸 Apply a Comic Book Drawing Effect To Your Photos in Photoshop!
Satellite images record moment gigantic iceberg breaks away from Antarctic ice shelf
Man orders $3,000 Sony a7 IV, gets a box of white powder instead
Sony Has Moved 90% of its Camera Production from China to Thailand
The Sword-Billed Hummingbird: A Knight of the Andes