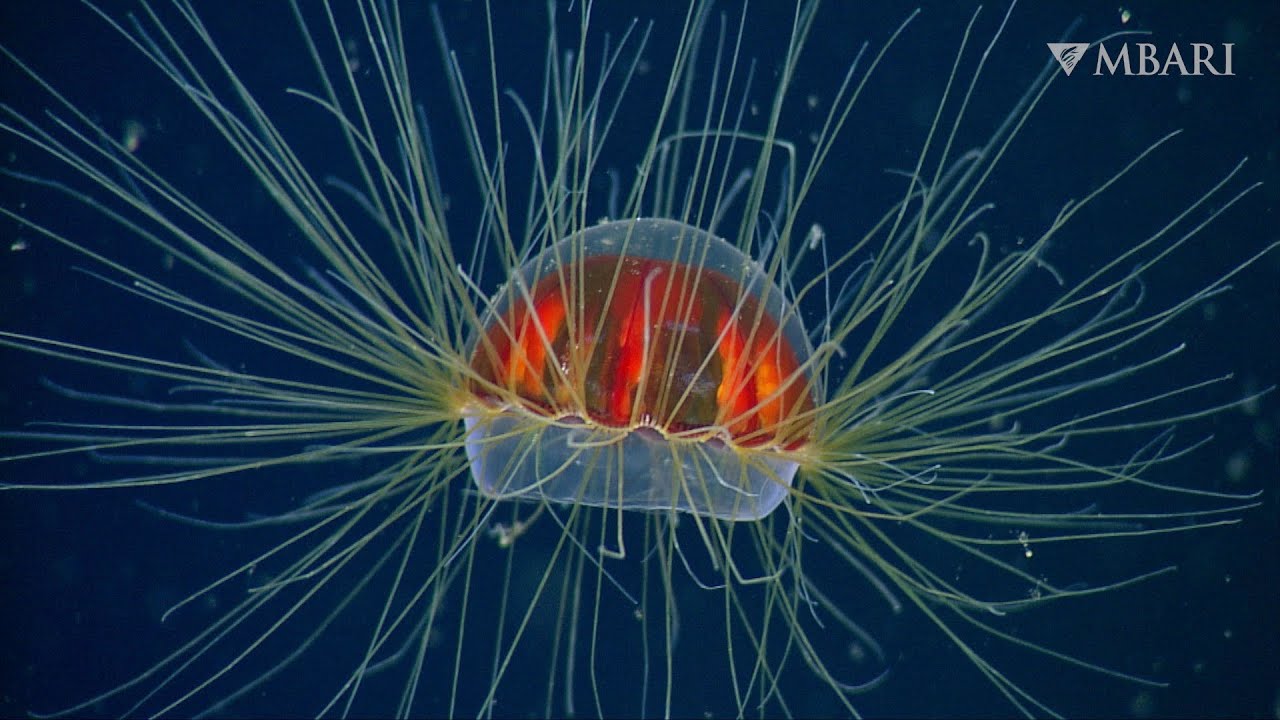 The Monterey Bay Aquarium Research Institute (MBARI) has published a new video that features what it describes as a weird and wonderful deep-sea creature. This “psychedelic” jellyfish is one of the most colorful residents of the ocean’s midnight zone.

MBARI regularly uses underwater remote operated vehicles (ROVs) to explore the ocean off the coast of Monterey, which plays host to a colossal underwater canyon that measures a mile from top to bottom and rivals the height and depth of the Grand Canyon. The Monterey Canyon hosts abundant life and is a spectacular subject for scientific observation including a rare fish that sees through its own head and a giant black “phantom jellyfish.”

In a recent survey of the bathyal zone, otherwise known as the midnight zone which has a depth between 3,300 feet and 13,100 feet below the surface, researchers captured stunning footage of one of the depth’s most colorful creatures: a Crossota millsae.

“This jelly is one of the most colorful residents of the ocean’s midnight zone,” MBARI explains. “The remarkable coloration of this jelly tipped off scientists that they had found a previously unknown species. It was named in honor of Claudia Mills for her dedication to studying the ocean’s delicate drifters.”

The Crossota jellyfish group is made up of what are mostly extremely small creatures: they are usually less than two inches across. This particular specimen is even smaller and has a maximum bell diameter of just 1.1 inches. This particular Crossota has a few unique characteristics that separate it from other jellyfish.

“MBARI has observed several species of Crossota in Monterey Canyon. Unlike many jellies, we can see obvious differences between the males and females. The eggs in the females are large and globular, while the male gonads are shaped like sausages,” MBARI explains.

“The baby medusae stay attached under the mother’s bell until they are ready to launch. While brooding behavior is not unique to this jelly, it is always exciting to observe in the deep sea.”

In January of 2020, MBARI published a detailed article that explains the history of this species and how, for many years, the assumptions about their evolution and relationships to one another were probably incorrect.

“For 30 years now we’ve been seeing lots of these jellies, little red jellies, just above the bottom and in the water column,” said MBARI biologist George Matsumoto who was one of the researchers who untangled the complicated family tree of these deep-sea red jellyfish. “And it turns out that historically, even though we thought we knew what they were, many of the initial papers had the wrong identification.”

More on the Crossota jellyfish and its many intricacies can be read on MBARI’s blog.