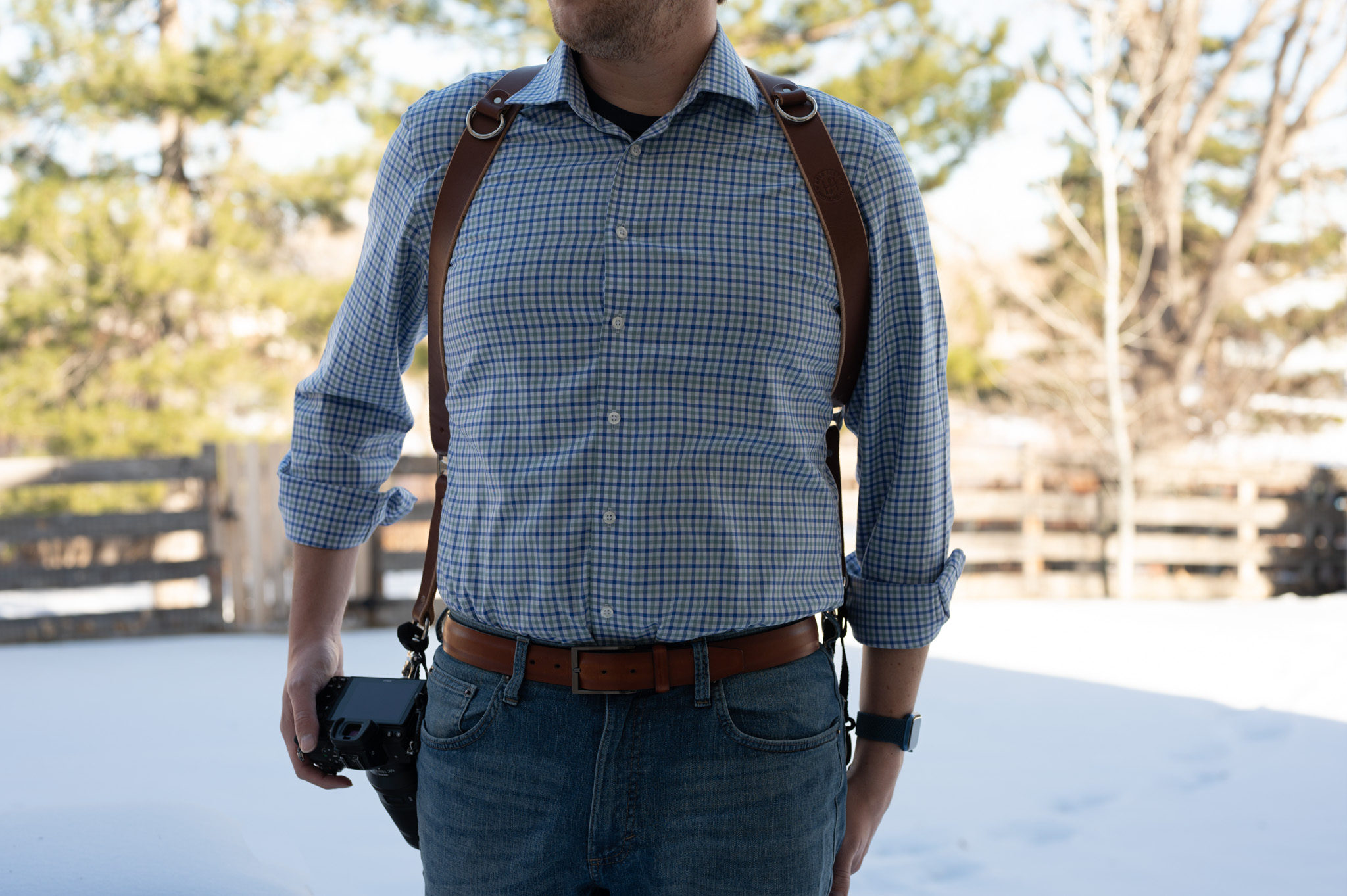 If you’ve spent time around wedding photographers, you’ve probably seen the camera straps I’m going to discuss in this article. HoldFast is a small company that makes a variety of (primarily) leather camera accessories. They take pride that all their gear is made at their facility in Oklahoma, USA.

HoldFast’s flagship product is the Money Maker, which is a dual-strap system. Over the past several years, these straps have become quite popular, particularly among wedding photographers. However, they are hardly cheap at $230 for the baseline leather model. Is it worth the price? That’s what I’ll cover in today’s review.

HoldFast makes several variants of the Money Maker, including the “skinny” for lighter setups, as well as vegan/non-leather options. There is also a Money Maker Solo, which is a single camera strap for those who don’t need to carry two cameras at the same time. Although this review covers the standard Money Maker, I also own and have used the Money Maker Solo strap extensively. All of the pros and cons in this review apply to the Solo as well (except, of course, for the pro of switching quickly between cameras).

Before getting into the specifics of the Money Maker, a note about two-camera straps generally:

Sometimes in photography, it is convenient or even necessary to carry two cameras at the same time with different lenses attached. In time-sensitive situations, this can ensure you capture the decisive moment whether it needs a wide or long lens. I photograph a lot of weddings and concerts – both situations which benefit from a dual camera setup.

For example, in the two images below, I was taking a wide shot of the band (first image), when I noticed that the lead singer had begun making some expressive faces. I quickly switched cameras and got the second shot below, which is one of my favorites from the evening. These two images were taken within three seconds of each other.

Given this, I would only want to use a dual strap system these days, whether from HoldFast or a similar company like BlackRapid.

Almost everything on the Money Maker is either leather or stainless steel (more on the almost in a moment). It feels like a premium product and should last through a lot of professional use. Mine looks at least as good as new; I think they look even better once broken in a little.

HoldFast clearly paid attention to detail on many of the small things to set this apart from most other straps. For example, I really like that the sailboat clips feel very secure but are also fast and easy to take off, which is especially useful if you need to take the camera on and off the strap frequently.

I’d be remiss if I didn’t mention the one design choice that I’ve never understood: the construction of the safety catch.

The safety catch is an optional backup strap that attaches to the side lug of your camera (the same place that traditional straps are attached). You can see it shown here – the black vinyl strap on the left: 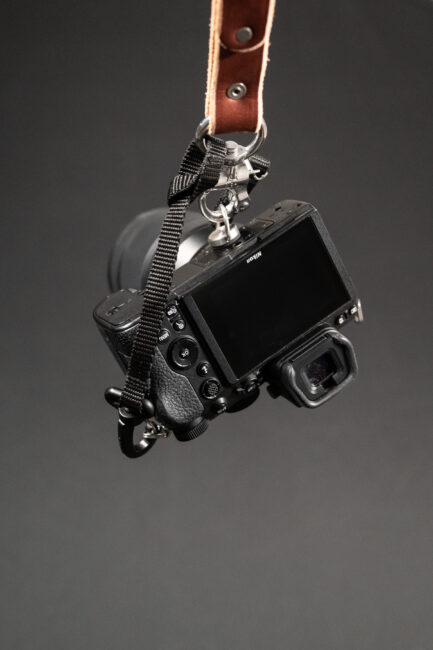 Personally, I use the safety strap when working with the Money Maker. Even though I’ve never had an issue at all with the traditional sailboat strap and screw (it has never loosened at all while I’m wearing it), one screw on the bottom of my camera holding a dangling camera and 70-200mm f/2.8 lens makes me too nervous. I like having the backup.

Unfortunately, whereas everything else is steel and leather, the safety catch is a mostly-plastic clip and nylon strap. It’s not a problem from a camera security standpoint, but the design is pretty bad. I am not a design expert by any means, but on a premium strap like this where the goal is looking good in addition to great function, I wish they would have made a different choice here. Perhaps a small leather leash that clips into the side instead?

Excluding the safety catch (and you can exclude it; it’s completely removable), the build quality of the Money Maker is excellent. HoldFast’s website claims they stopped testing how much weight the straps could hold after 246 pounds / 112 kilos, and I don’t doubt it. This is a very secure and solid piece of gear.

Once you have the straps set up properly for your torso size, the handling of the Money Maker is great. My typical day is 8-10 hours of wear with a camera and a 70-200mm f/2.8 on one side, and another camera with a variety of lenses on the other. At the end of the day, I notice almost no discomfort, which is not something I could say about the prior strap solutions I used for weddings.

The best thing about a dual-camera strap is how quickly and easily you can switch between bodies, and the Money Maker excels at that. During can’t miss moments at weddings, I will often use both bodies within a second or two of each other to get different perspectives on the scene.

For example, during a ceremony as the first kiss is approaching, I will position myself where I want to be, set my focus and exposure for both bodies, then put the wider lens at my side. When the kiss happens, I will take a burst with the long lens to get the tight shot, then let go of that camera, pick up the other and take a burst with the wide lens to get the bigger scene. It takes a little practice, but the whole process is fast enough to do during one kiss!

(Quick side note – if I have a second shooter, I will likely not switch cameras during a critical moment like a first kiss. Instead, I will get one shot and the second shooter will get the other. But I do a lot of small weddings where there is no second photographer, so I want to capture both myself.)

For example, I took the following two shots within seconds of each other:

Because you can leave the screws in the bottom of the cameras and then attach and detach via the sailboat clip, it is easy to take the cameras off the strap for switching lenses or even bodies if needed. For weddings specifically, this is convenient for dinner time, where you can take the cameras off and sit down, but still be ready to go again within a few seconds.

Value is where things get a little tricky for the Holdfast Money Maker. There are several leather and non-leather choices in HoldFast’s lineup, but for purposes of value I am going to talk about the least expensive leather option, which is currently the Bridle Leather for $230. This is nearly $100 more expensive than the equivalent strap from BlackRapid, which uses the same screw technology and setup. (Holdfast actually leases the patented screw from BlackRapid.)

However, when style points count, I much prefer the “dressed up” look of the Money Maker to the “tactical” look of the BlackRapid. This distinction is one of the main reasons why I see these straps being used largely by event photographers, because it is one of genres of photography where your style as a photographer often does matter. When you are a wedding photographer, how you dress is a part of your professional brand, and it may be worth it to you to have gear that compliments that style. This is less likely to be an important consideration for many other forms of photography. (Although if you do use a Money Maker outside of event photography, I’d love to hear from you in the comments below!)

Online, you can find straps much cheaper than either HoldFast or BlackRapid, but when I have thousands of dollars in gear hanging from a strap, I like to know that it is well-made and I don’t have to worry about it breaking or failing. Nor do I want to worry about comfort after a full day of shooting. All in all, I wish it were less expensive, but I still think the Money Maker is a decent value. It isn’t meant to be a cheap strap, and I feel like mine will last a lifetime.

The Money Maker is easy to use, with one caveat: it’s easy to use if you take pictures the way the strap is designed for. What I mean by that is the cameras are meant to hang at your sides, and when you want to use one, you grab it, raise it to your eye (or out in front of your chest), and take a picture. Then you can let it go back down to your side.

If this is how you typically take pictures, the strap works great and is easy to use. However, because of the strap design, one thing you do not have is ease of taking shots at different heights. For example, if you wanted to take an over-the-head shot at a wedding reception, you would have to unclip one of your cameras to hold it up that high. Fortunately, the sailboat clip makes it easy and fast to disconnect. Unfortunately, if you use the previously mentioned safety clip, this process is slower, since you have to unclip a second clip. The same issue applies if you want to take very low images without physically moving your whole body towards the ground.

If you usually take pictures at traditional heights, the Money Maker is a breeze to use. If you often find yourself holding your camera above your head or down at your feet, you should probably look at a different solution. 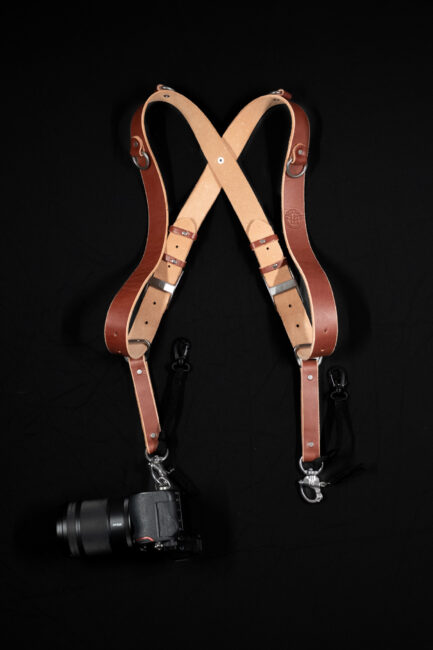 Overall, I am very happy with the HoldFast Money Maker, and it is a tool I use regularly. It’s not for every situation, and it is on the expensive side, but it functions the way I need it to and looks the way I want it to for my event work.

If you are interested in purchasing a Money Maker, below are several of the popular options on B&H:

Do you use the HoldFast Money Maker or have a different dual-strap setup? Let me know your experience and thoughts in the comments!