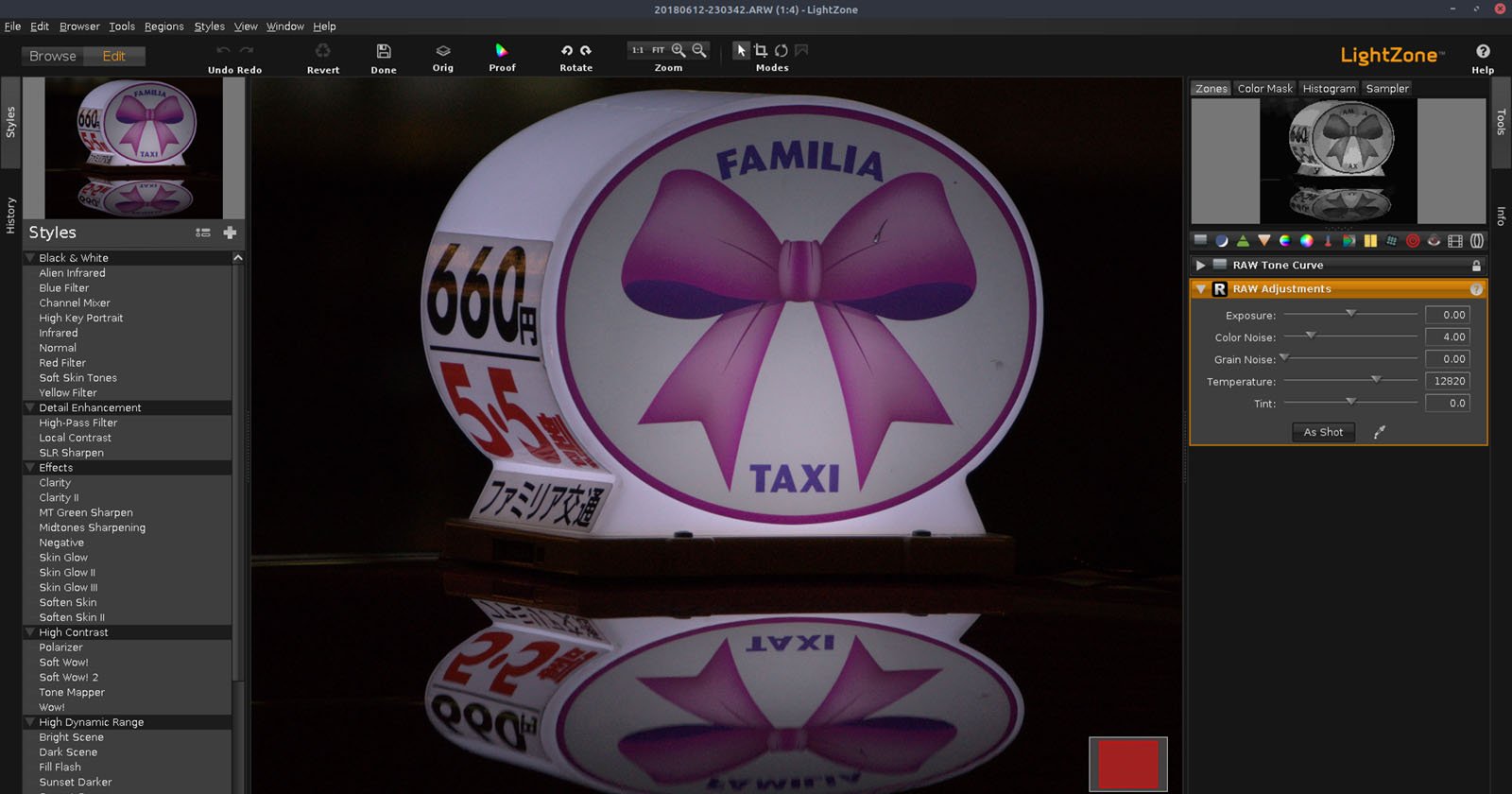 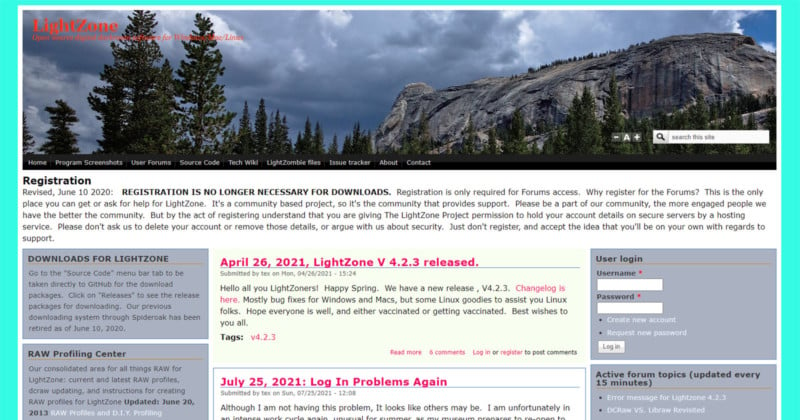 Darktable, RawTherapee, digiKam are undeniably powerful applications for processing RAW files. But while they offer a plethora of advanced editing and processing tools, using them to get the result you want requires and patience and some effort. But who has time for that?

Enter LightZone, an application that makes processing and editing a less time-consuming and demanding task, without compromising functionality.

There are a few things LightZone does differently from the mainstream applications to achieve that. Firstly, instead of using layers, LightZone allows the user to build up stacks, where tools can be rearranged, modified, enabled/disabled, and removed from the stack. Since LightZone is a non-destructive editor, any tool can be re-adjusted or modified later and even across different sessions.

It’s also possible to apply a toolstack to multiple RAW files and photos in a single action. More importantly, you won’t find traditional tools like curves and level adjustments in LightZone. Instead, the application features unique tools for tonal control based on the Zone System and HDR tone-mapping.

On Ubuntu and Linux Mint distributions, installing LightZone is a matter of running the following commands:

If you happen to use Debian, Mageia, or openSUSE, you can install LightZone through the Open Build Service.

LightZone’s interface follows the established conventions, so finding your way around it shouldn’t cause you any problems. The application is split into two modules: Browse and Edit.

The Browse module lets you pick a directory and perform basic operations on the photos in it. Using the Send and Convert buttons in the main toolbar, you can copy the currently selected photo to another directory and convert the photo to a different format.

All photos in the current directory are displayed as thumbnails in the thumbnail bar at the bottom. To view a large version of the photo, select it in the thumbnail bar. You can then edit the photo’s basic info such as rating, title, location, etc. in the Info sidebar. All in all, the Browse module is a pretty standard affair. 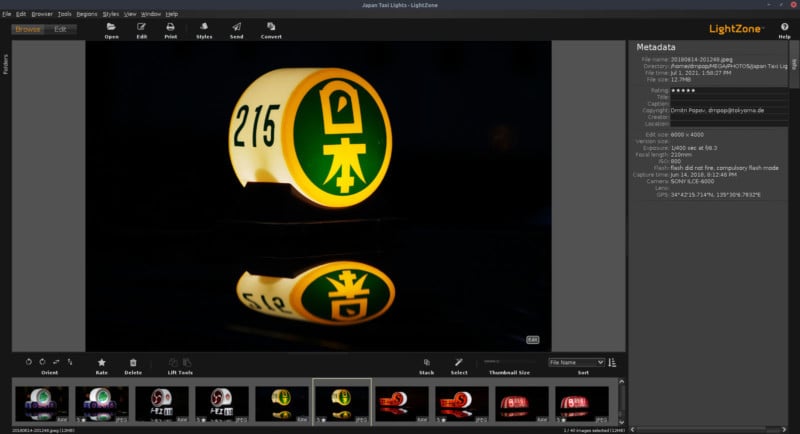 Things get more interesting when you switch to the Edit module, though. The first thing you will immediately notice is the Styles left sidebar with a long list of styles. A style in LightZone is essentially a preset that allows you to apply multiple actions in a single step.

All styles in the application are arranged into logical groups. The Black & White group, for example, contains presets for converting the current photo to black and white, while the Detail Enhancement group offers styles for sharpening and improving local contrast.

In addition to existing styles, LightZone allows you to save the operations applied to the current photo as a custom style, so you can easily build a library of your own presets. Of course, you can also tweak the existing styles, too. The Preview panel above the Styles list lets you preview any style by hovering the mouse over it. 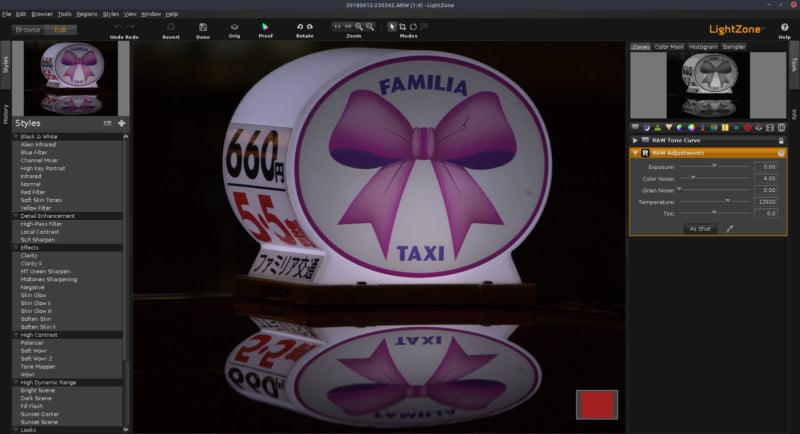 All editing tools in LightZone are accessible via the Tools sidebar. Instead of cramming all possible features and controls under the sun in the editing interface, LightZone offers a more refined approach. The application’s editing functionality is distilled to a handful of key tools, and each tool offers just a few adjustable parameters. While some photographers may find this approach limiting, most users will most likely find the available tools adequate for most editing tasks. More importantly, simplified tools make it significantly easier to master LightZone’s basics.

Besides the standard tools like Sharpen, White Balance, Hue/Saturation, etc., LightZone offers a couple of unique and genuinely useful tools, such as Relight and ZoneMapper. The former is an effective tool capable of improving overall lighting. It does so by reducing the large-scale contrast and increasing the local contrast. While the relighting effect depends on the specific photo, in many cases, applying the tool using the default values can produce rather impressive results. Similar to other tools, Relight has a handful of parameters you can adjust to improve the overall effect.

ZoneMapper is the key tool in LightZone, and it allows you to adjust the brightness and contrast of the entire photo or only specific parts of it for any combination of the highlights, midtones, or shadows. As the name suggests, this tool is based on the Zone System developed by Ansel Adams and Fred Archer in the 1940s. 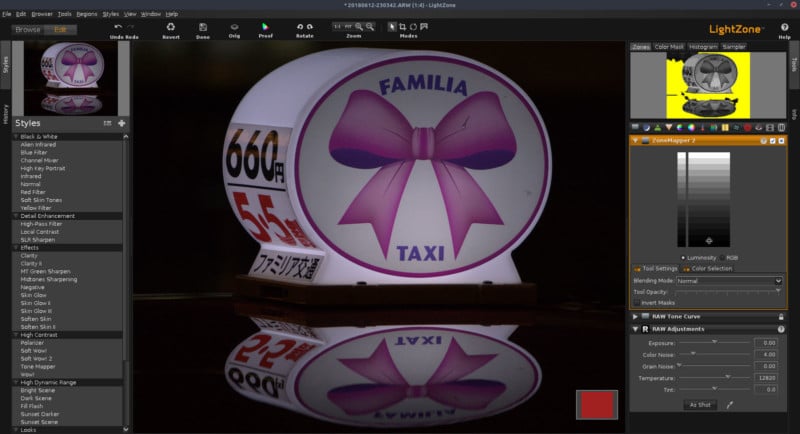 The original Zone System assigns numbers from 0 through 10 to different brightness values (known as zones), with 0 representing black, 5 middle gray, and 10 pure white. Each zone in this system differs by one exposure value. The Zone System in LightZone is adapted to the realm of digital photography, so it has 16 zones where each zone differs by half an exposure value.

ZoneMapper in LightZone works in combination with the ZoneFinder tool. To activate the latter, you have to switch to the Zones section of the preview pane above the Tools sidebar. Enable then the ZoneMapper tool, and hover the mouse over a specific zone to highlight it in the preview thumbnail. This simple technique lets you quickly identify specific zones in the photo. You can then adjust the desired zones by expanding or compressing them using the mouse. Although you can get to grips with the ZoneMapper tool by simply experimenting with different settings, knowledge of the Zone System can help you to get the most out of LightZone’s zone mapping functionality.

Besides Relight and ZoneMapper, LightZone features a couple of other useful tools, too. When working with RAW files, you can use the Raw Adjustment tool to tweak various settings, such as exposure, temperature, and color noise. In addition to that, LightZone automatically removes hot pixels. The Clone tool can come in handy when you need to remove unwanted objects from your photos, while the Spot tool can be used to remove dust, scratches, and blemishes.

As with any RAW processing and photo editing application worth its salt, LightZone features non-destructive editing, so none of the actions are applied directly to the original file. The application keeps track of all changes applied to the photos and you can view and undo them in the History section of the left sidebar.

When you close the editing session, LightZone saves all modifications in a special LZN file which contains the JPEG version of the original photo along with the applied toolstack. Photos containing LZN files are displayed as stacks in the Browser module. A basic stack contains the original photo and the related LZN file. You can use the Expand image stacks button to view the original and its LZN versions.

The clever part is that you can either edit the original photo from scratch (thus creating a new version of it with a separate LZN file) or continue editing the latest LZN file. This approach allows you to maintain multiple editions of the same photo. Better still, LightZone allows you to pick a toolstack from a specific LZN file and apply it to another photo. Like most tools in LightZone, this functionality is straightforward in use. Select the desired LZN file, press the Copy toolstack button, select the target photo and press Paste toolstack.

While all of these features make LightZone a rather competent RAW processing and photo editing application, it does have a few shortcomings. The Browser module does remember the most recent location, but it has no bookmarking functionality, which makes it difficult to switch between often-used directories. You can edit basic metadata, but there is no way to view full EXIF data. LightZone allows you to sort thumbnails by different criteria (capture time, rating, aperture, ISO, etc.), but it doesn’t provide any filtering capabilities. Finally, the application’s  export functionality is limited to TIFF and JPEG formats, and LightZone doesn’t support upload to popular photo-sharing services.

Eclipsed by Darktable and RawTherapee, LightZone has been leading a quiet life in relative obscurity. This is a crying shame, really, because LightZone offers a rather unique approach that can dramatically reduce the pain of processing and editing RAW files and JPEG images.

The application’s interface may seem somewhat dated, and the pace of its development can hardly be described as furious. It’s also not the fastest RAW application out there. But what it lacks in speed and polish it makes up for in simplicity and originality. And personally, I think there is something endearing about this underdog of the RAW processing tools.

About the author: Dmitri Popov is an amateur photographer and professional tech writer. He’s the author of the digiKam Recipes and Linux Photography books. You can find more of his work on work on his website. This article was also published here.