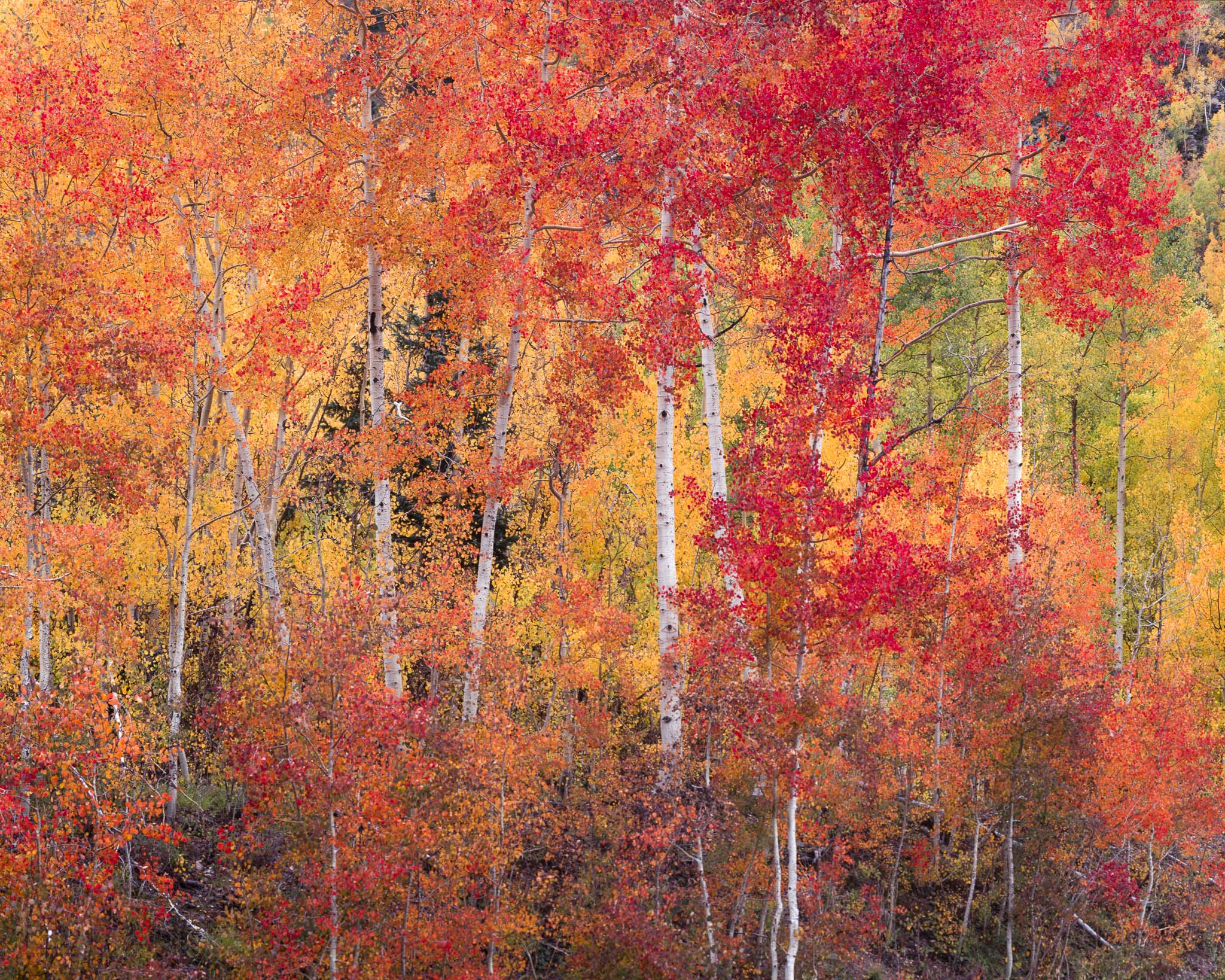 For the past year or so, my main camera for landscape photography hasn’t been one of the newest high-resolution mirrorless cameras that I spend so much time writing about. Nor has it been an ol’ reliable DSLR. Instead, I’ve been using large format film, especially a 4×5 camera.

When other photographers see the large format camera I’m using, I usually hear something along the lines of “Wow, old-school!” But that’s only partly correct.

On one hand, 4×5 cameras are the definition of old-school photographic technology. They’ve existed in some form since about the 1830s. Yet they’re still made today and use modern manufacturing techniques. My 4×5 camera was built in 2021, making it the newest camera I have. In its own ways – including precision manufacturing and modern materials like carbon fiber – it’s surprisingly cutting-edge.

I’m working on a longer guide that’s a full introduction to shooting 4×5 film: whether it’s right for you, what gear you’ll need, how to process your images, and so on. Today, though, I just want to explain why 4×5 film (and larger) continues to be relevant even in the 2020s.

The truth is that there’s no perfect tool in photography, and everyone’s needs are different. But there are still a few reasons why film makes sense these days and why I’ve been using it for most of my recent landscape photography work.

I’m a sucker for maximizing image quality. It’s why I go through the hassle of focusing at the double-the-distance point, setting the optimal aperture, using good lenses, and doing everything else in my power to take landscape photos that are as detailed as possible. Certainly detail isn’t the most important part of a photo, but there’s some satisfaction – maybe just satisfying my misguided perfectionism – to capturing the highest possible image quality anyway.

The stereotype of film is that it takes the exact opposite approach. It is unavoidably imperfect. Film offers color shifts, light leaks, endless grain, and countless other artifacts in your images. It’s meant for, I don’t know, Wes Anderson? Hipsters? That sort of crowd.

But while film can be like that, it doesn’t have to be. It’s very flexible. You can shoot expired film on a broken Pentax K1000 and get all manner of “interesting” effects. Or you can shoot a modern film like Kodak E100 (most recently re-formulated in 2018) on a large format camera and get detail in spades.

4×5 film – which I used to take most of the photos in this article – is the smallest “large format” size. The biggest popular size is 8×10, which is four times the area of 4×5 (similar to the difference between Micro Four-Thirds and full frame cameras). Other film sizes are even larger, albeit exponentially harder to work with and rarely available in color.

So, when I show you the detail comparison below – 4×5 film versus the 45-megapixel Canon EOS R5 – keep in mind that it’s possible to achieve more detail than this with large format film if you’re so inclined.

Here’s the image from the EOS R5:

The compositions aren’t perfectly equivalent because the two cameras have different aspect ratios. The Canon EOS R5 has the typical 2×3 aspect ratio of a full-frame mirrorless camera, while the 4×5 setup has, of course, a 4×5 aspect ratio, which is more squarish. Still, I framed them as best I could so that the two photos would be comparable.

In fact, taking a closer look at the images above, it’s difficult even to tell that one is film and one is not. I do like the colors a bit better on the 4×5 shot, but the two images are close enough that I could probably make them look about the same in Lightroom. In other words, film can look very digital-esque if that’s what you’re after.

Detail slightly favors the 4×5, as shown in the 100% crops below (click to slide between the two images), but they’re pretty similar: 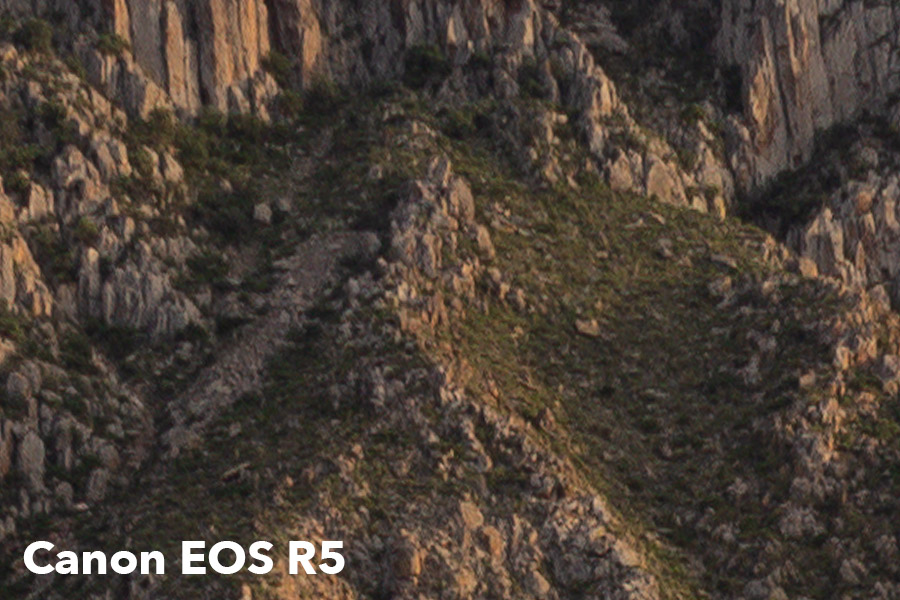 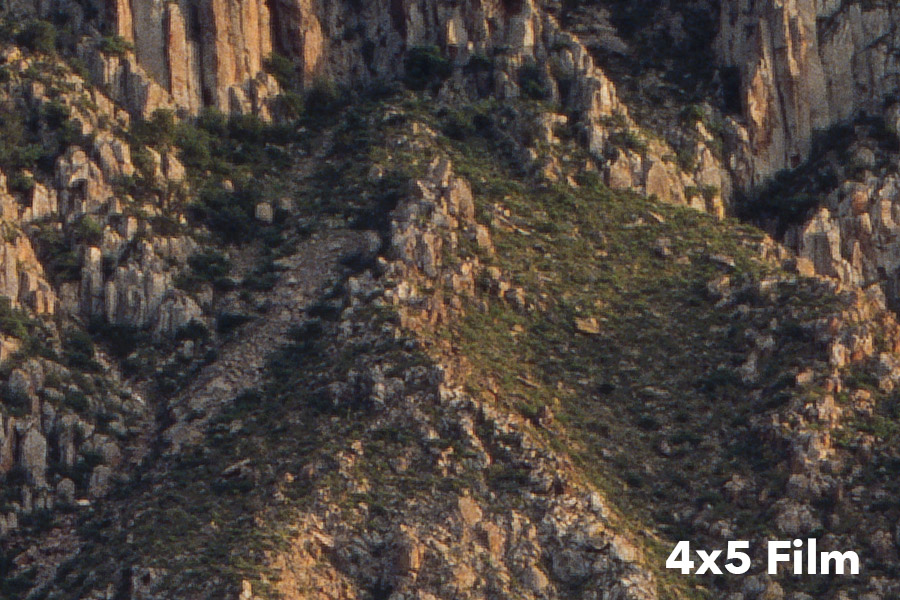 If I had paid big bucks to have the film drum scanned, the 4×5’s quality would be even higher, but I’m perfectly happy with the file from my desktop Epson scanner. That said, the film photo does have slightly more grain in uniform areas like the sky (though not much, as Kodak E100 is a pretty low-grain film). In any case, if you’re after the totally clean look, digital has the edge.

So, hopefully it’s clear that large format film doesn’t lack image quality. However, some digital cameras can beat the level of detail from a 4×5, such as a 100-megapixel medium format camera or the sensor-shift mode on cameras like the Panasonic S1R and Sony A7R IV. The good thing with film is that there’s always a format with increasingly more detail if you need it. Jumping up to 5×7 or 8×10 – especially combined with drum scanning – will increase your resolution many times compared to what I’ve shown here.

Digital sensors today have simply outstanding dynamic range and almost limitless shadow recovery. What about film? You may have heard conflicting things – either that it has a narrow dynamic range, or that it has far better highlight recovery than digital. Which is true?

The answer is that it depends on the film. Color negative film like Kodak Portra 160 has fantastic highlight range, practically unlimited. I’m working on direct, side-by-side tests, but my initial impression is that color negative film roughly matches digital sensors in total dynamic range (though it’s biased toward good highlight recovery with film and good shadow recovery with digital).

Meanwhile, color positive film – AKA slide film – like Fuji Velvia 50 and Kodak E100 have a more limited dynamic range with less shadow or highlight recovery. They need to be exposed more carefully. Still, I’ve found very few real-world situations where I run out of dynamic range on slide film, especially on Kodak E100 and Fuji Provia 100.

As for colors, it’s an interesting situation. To me, the color rendition of a good film is better than a digital sensor, especially in red tones, but some of that advantage is thrown away when scanning the film (as opposed to printing optically from a negative or looking at a slide on a light table/projector).

That said, there’s a difference between color negative film and slide film, especially if you’re scanning them yourself. Color negative film can take a long time to edit digitally to get optimal colors. On the other hand, slide film requires minimal edits and almost always boasts great colors. Digital raw files are somewhere in between. I still find it’s possible to get a similar appearance among the three after pushing them around for a while, but the differences out-of-the-box clearly favor slide film.

I’ve also noticed that film tends to capture finer color details than digital, which are visible if you magnify the images substantially. In the extreme crop of the photo below, for example, I don’t believe I could have captured the variety of nearby, distinct colors on digital as well as Portra 160 negative film did:

Overall, the three choices – color negative, slide film, and digital – are simply different beasts. Digital is extremely versatile if you shoot raw, especially in terms of dynamic range and shadow detail. Meanwhile, the best colors I’ve captured have been on film, especially slide film, and the best highlight rendition is the domain of color negatives. That’s why I always carry both slide film and color negative film (plus some black and white negatives) when I shoot large format film! And why there’s still usually a digital camera in my bag, too.

On a typical large format camera, every lens becomes a tilt-shift lens. Moreover, if you buy lenses with large enough image circles, you’ll have almost unlimited levels of tilt and shift at your disposal, along with rise, fall, and swing.

When I started shooting large format film, I expected to use tilt far more than any other movements. But it’s actually been rise and fall that I use the most. The reason is that a classic challenge with forest photography – a subject I’ve been shooting a lot recently – is to avoid skewed trees. Pointing the camera even a bit upward will angle your trees as if they’re all falling away from you. It’s not always a bad effect, but it can get old quickly.

On the other hand, with my large format camera, I just point straight at the trees and use rise instead. The trees don’t go askew, and the photos look more natural to me.

Certainly, the same thing is possible with digital images if you do keystone corrections in Lightroom or Photoshop. But those corrections come at the expense of stretching the image, not to mention losing resolution when you inevitable need to crop the corrected shot.

Even though I’ve been using rise and fall more than the other movements, tilt corrections – and occasionally swing – are also a big help for aligning depth of field to the subject. They work great on “classic” landscapes where there aren’t any foreground elements breaking the horizon. This way, you can maximize sharpness across the image.

Of course, digital photographers have ways to extend depth of field, too. The main technique is focus stacking, which does a great job extending depth of field when nothing in the scene is moving very much. Still, I find the film process more flexible, especially if you want to combine tilt and shift effects. You can easily compose a large format film image with the optimal rise, shift, and tilt all at once. By comparison, on digital, you’d need to capture a focus stacked image and then perform keystone corrections on the resulting composite – potentially leading to some unwanted artifacts from either process.

The final and possibly most important reason why it can be worth shooting large format film is simple enjoyment.

I love digital photography. And I love film photography too. They’re different processes and both rewarding in their own ways. I find that I take slightly different photos with large format film, since it slows me down (which is both good and bad) to really linger on my subject.

Shooting 4×5 film – and larger – has also sparked some extra interest in photography for me. I’m going out more often and spending more time putting conscious thought into my photos again. I’m also re-evaluating some of my skills like my tripod technique and metering process that had lapsed some over the years.

Then there’s the entire darkroom process, which I’ve finally started doing for the first time since college. It’s a lovely way to spend time and a hobby in and of itself – which is really what all this is about for me. Yes, I write for Photography Life as a job, but I still consider photography my hobby and want it to be something I keep enjoying. Every photographer is different, but for me, film has helped with that.

This is far from a “film beats digital” article, and frankly if I had to choose either I’d say that “digital beats film,” especially for most professional use today. Yet I’m shooting film more and more. Part of that is because the results – if everything goes well – beat what I’m personally capable of achieving with digital.

But the other part is enjoyment. At the end of the day, that’s really why large format film (and film in general) remains relevant and is even seeing a resurgence. Simply put, it’s a lot of fun. In a very digital world where many of us, including me, are addicted to our screens, the tangibility of film is a welcome relief.