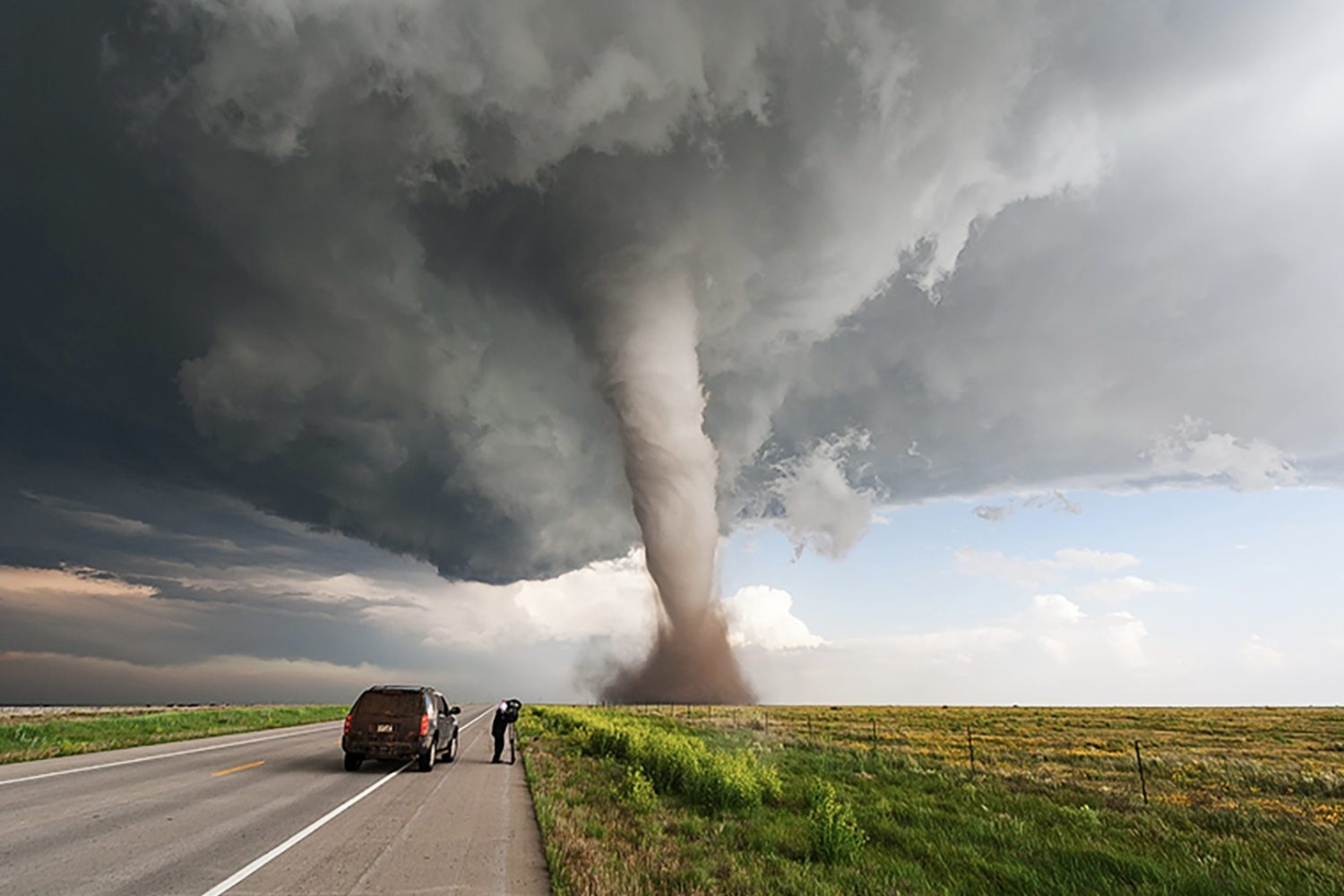 Lightning occurrence in the Arctic could double by 2100, according to research released this year. Although there’s a lot we don’t understand about flashes in the Arctic, scientists believe that rising temperatures associated with climate change could increase lightning in the region. These flashes, in turn, might bring with them the possibility of more Arctic fires and a devastating rise in carbon emissions.

Weather and environmental photographers have long reminded us of the power of the natural world, but as we reckon with the realities of climate change, they can also highlight the fragility of our planet. While curating this collection of weather photographs on 500px, we were inspired by the photographers’ ability to capture both astonishing beauty and urgent warnings, writ large across the skies.

We still don’t know nearly enough about climate change and weather—the potential link between tornados and climate change, for instance, remains murky and unknown—but in the end, we believe that photographers have a critical role to play in documenting our environment during an unprecedented time. By turns spellbinding and terrifying, all of the pictures here take our breath away—and some of them capture our world on the brink of irreversible change. 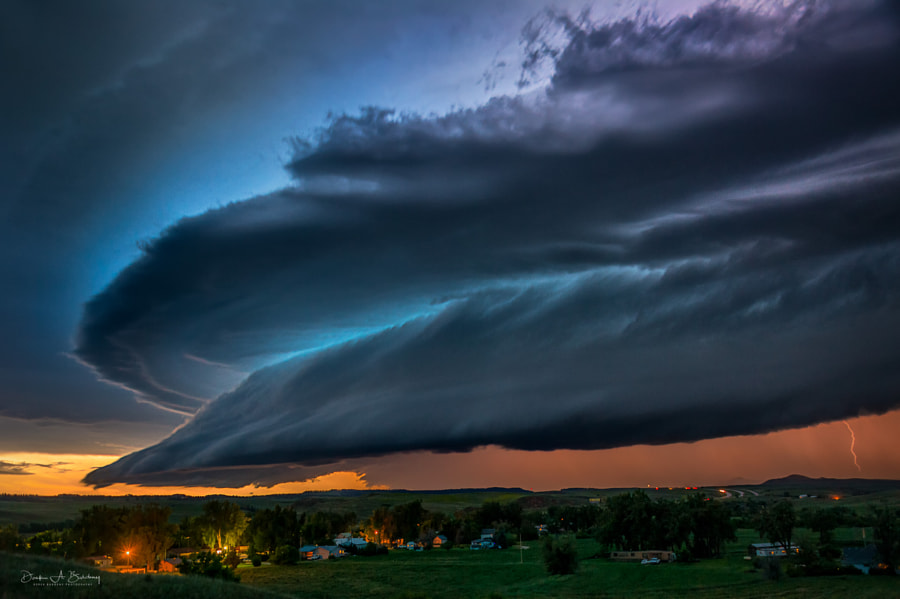 “Rotating supercell storms can have a very distinctive shape and are referred to as ‘motherships’ in the storm community,” photographer Derek Burdeny explains. He captured this moment in Spearfish, on the border between Wyoming and South Dakota.

In the case of supercells, the least common type of thunderstorms, you can expect to see severe weather, including tornados, high winds, lightning, or hail. They’re most often found in the Great Plains of the US, making the region a hotspot for storm-chasers. Luckily, everyone in the town below this mothership made it through the storm safely. Rob Darby regularly travels through the Western United States chasing storms across the countryside; he found this supercell descending upon a cornfield close to Sterling, Colorado.

When all was said and done, it produced multiple tornados and hail the size of baseballs. Much of Rob’s work features manmade elements, such as farmhouses or grain silos, to provide a sense of scale and context to nature’s fury. “This energy came out of nothing west of Moose Jaw and started as a roll cloud,” Mark Duffy, a storm photographer from Saskatchewan, remembers. “It morphed into a shelf, peaking around Pense, Saskatchewan. Incredible to witness.” 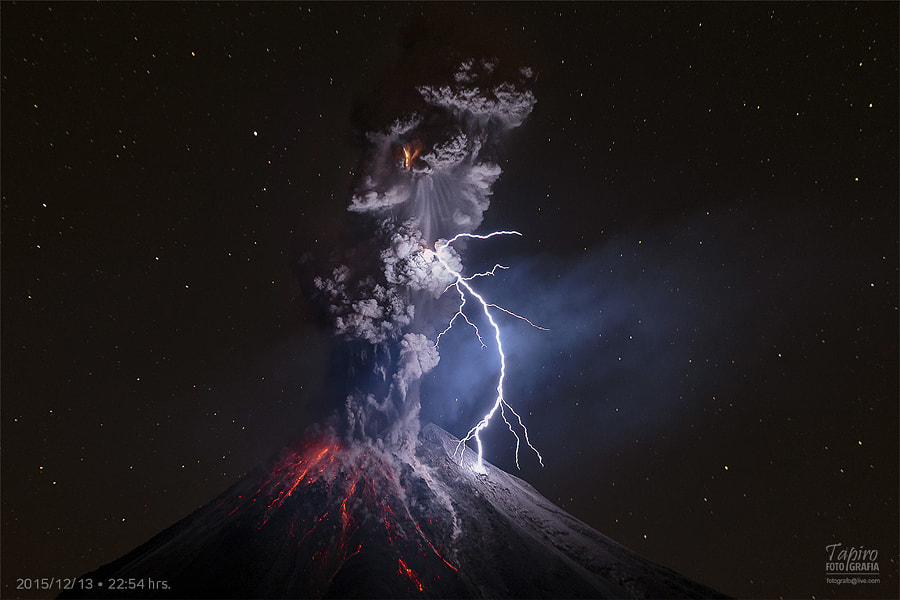 Sergio Tapiro Velasco was born in Colima, not far from Mexico’s most active volcano. Since then, he estimates he’s created more than 400,000 photographs of Volcán de Colima. He calls this one, made in December 2015, his “once in a lifetime shot,” capturing a breathtaking combination of lava, rock showers, ash, and lightning. That month, he devoted 20 days to watching the volcano, sleeping in his truck some nights and waiting for the right moment to arrive. 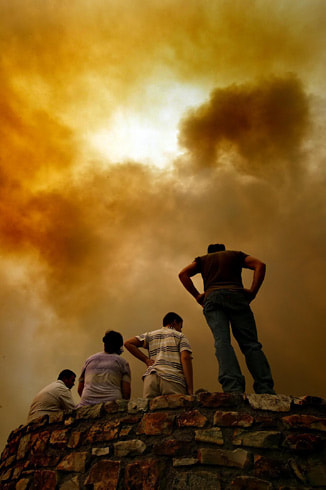 The photojournalist Sergio Azenha documented this wildfire in Pampilhosa da Serra, Portugal, in August of 2005, as these people watched the flames threaten their homes. That year saw the worst drought the country had experienced in years; the following weekend, the Portuguese government requested help from the EU in battling the fires. 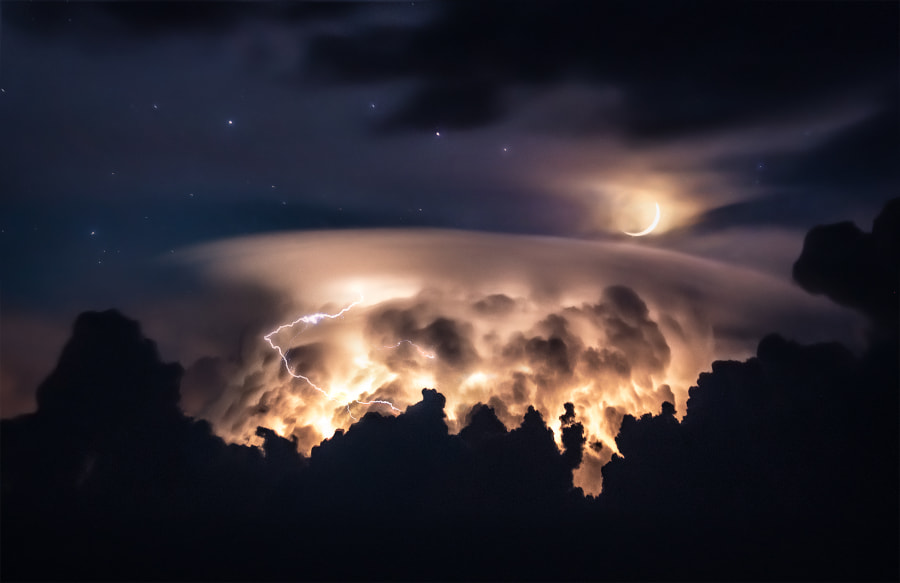 “Seeing the storms on the American plains is perhaps the most memorable experience I have ever had in a life spent fascinated by weather,” Marc Adamus says. “In over 13,000 miles, I witnessed moments of breathtaking, primal, awe-inspiring power I will never forget.” He photographed this cloudscape, illuminated by lightning and the crescent moon, in Nebraska. 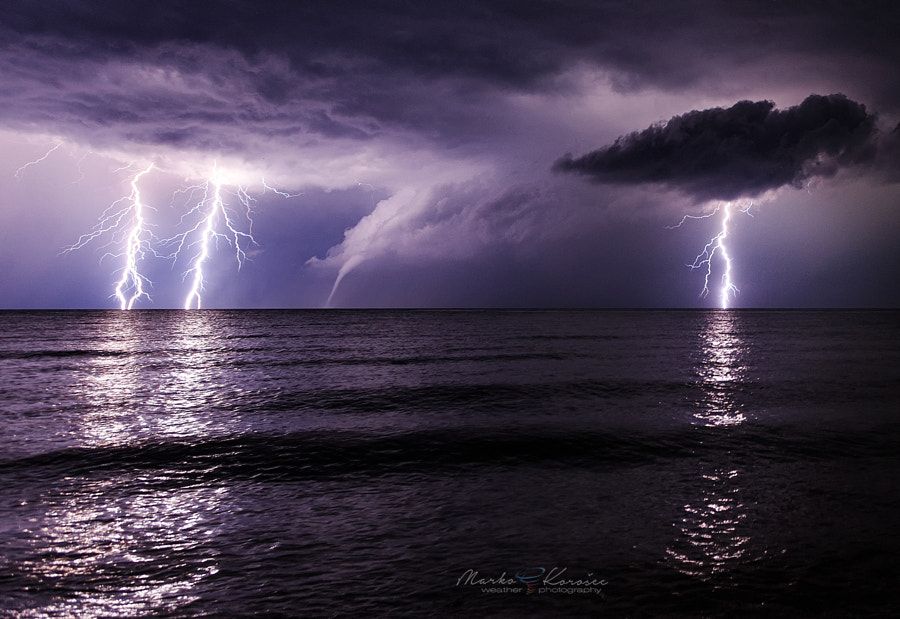 For Marko Korošec, an extreme storm chaser, realizing this picture was a dream come true. “What a remarkable sight for me—I always wanted to see a waterspout over the Adriatic sea at night,” he says. “Finally got this scene: a massive lightning barrage in front of an elephant trunk waterspout as seen from Novigrad, Croatia.” He caught the moment in late August of 2018; autumn is usually the best time to find waterspouts over the Mediterranean Sea. 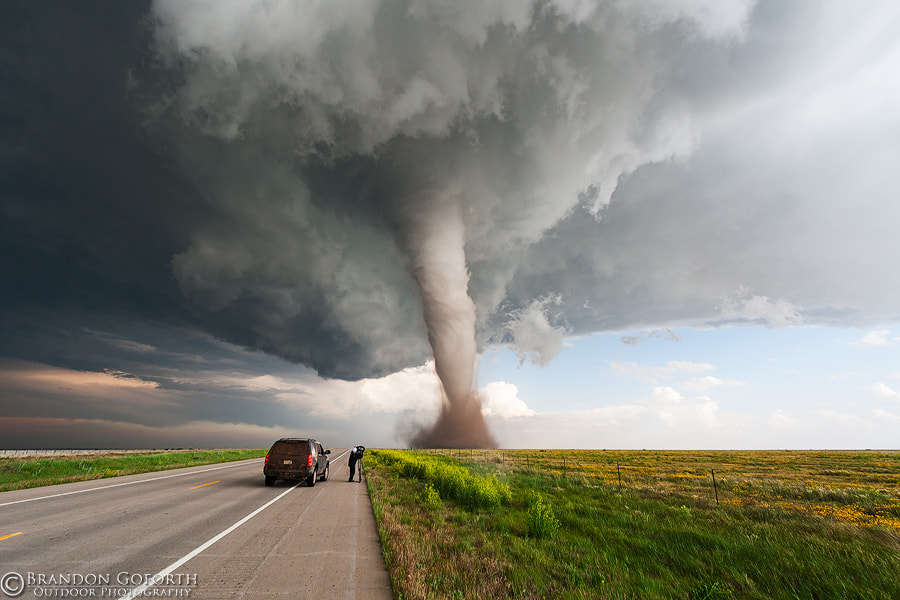 Brandon Goforth caught up with this tornado south of Campo, Colorado, close to the Oklahoma border, on May 31, 2010, a day that would go down in storm chasing history. The large tornado lasted for almost twenty minutes, drawing crowds of law enforcement, emergency management, and storm chasers. Some who saw it have described it as the “perfect tornado.” 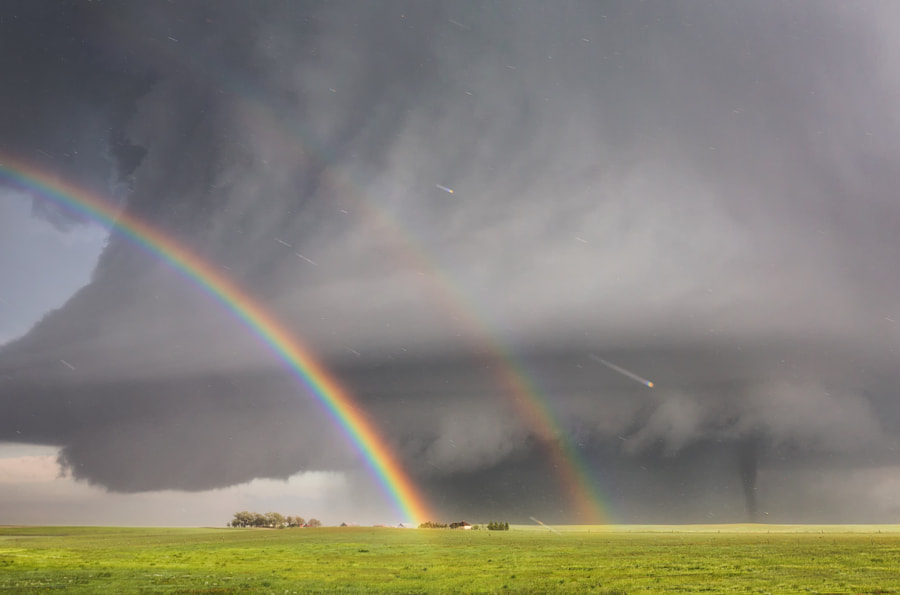 Kelly DeLay was just outside of Simla, Colorado, when he captured this tornado and a double rainbow. The artist’s interest in weather started early in life; when he was in seventh grade, he built a pinhole camera that he used to photograph lightning. In Simla, the rainbows felt so close he could almost touch them. Before he knew it, hail the size of golf balls was falling, refracting light from the rainbow. 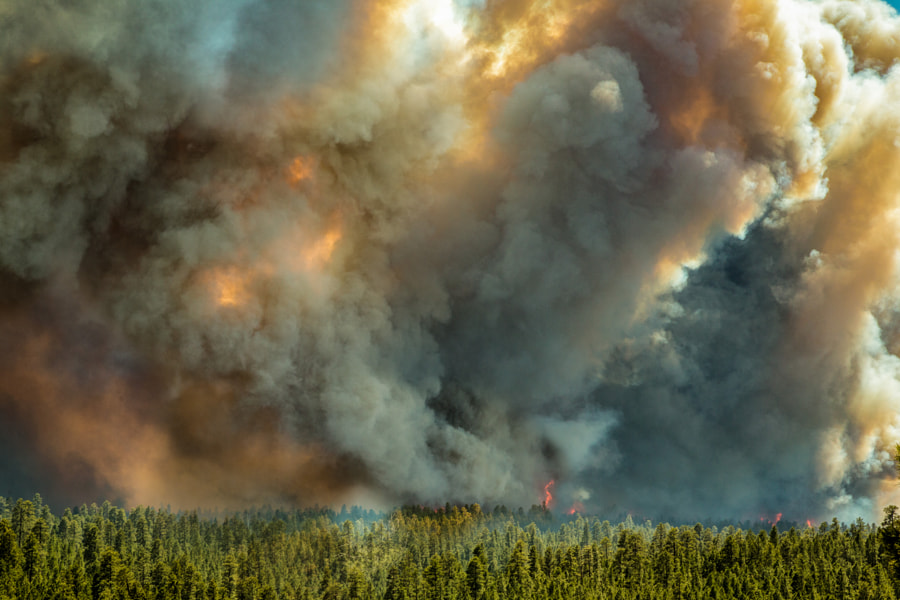 Kathy Ritter photographed the Tinder Fire in Arizona in 2018. The fire, caused by an abandoned illegal campfire, was fueled by low humidity, high winds, and dry vegetation. By May 6, just over a week after Kathy captured this photo, the fire was 79% contained at 15,841 acres. 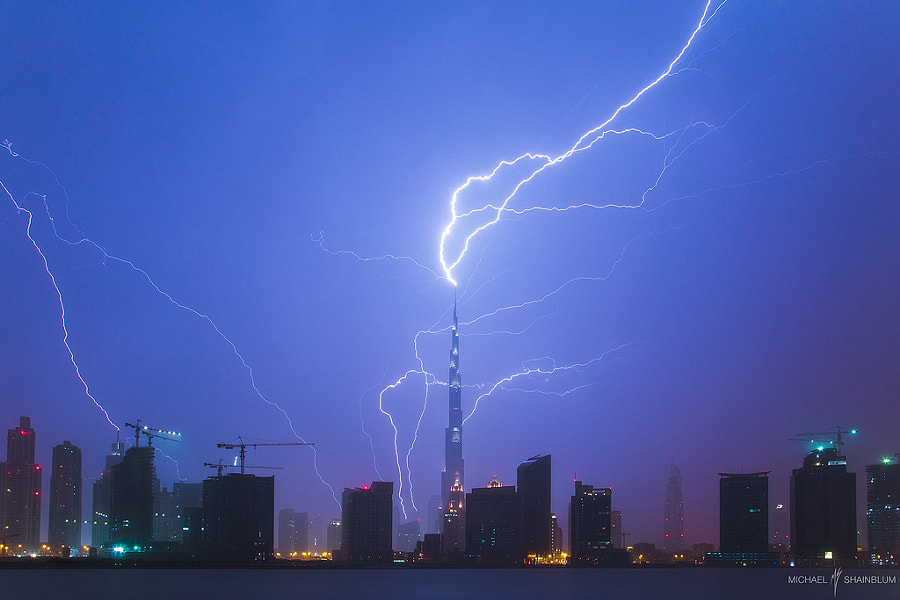 “In 2014, I took a trip to Dubai and witnessed one of the most incredible moments in my life,” Michael Shainblum says. “This is a single exposure of lightning striking the tallest building in the world, the Burj Khalifa.” Anticipating this moment, he waited for four hours as the rain fell, hoping to capture a strike. 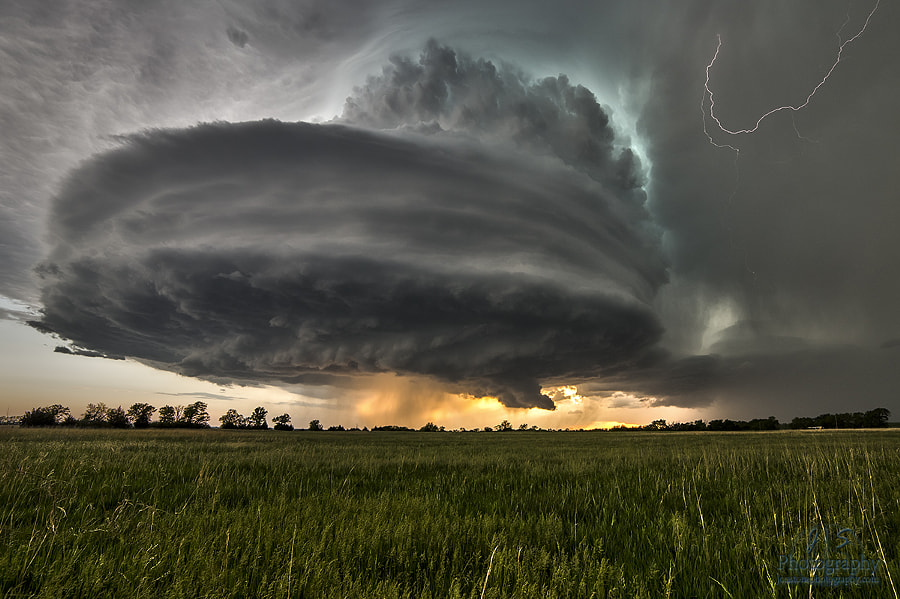 “For over 20 minutes, I sat on a highway near the town of Severy, Kansas, shooting this mothership supercell,” Jon Stone wrote after capturing this moment. “I would have loved to capture a CG lightning strike with this, but the storm only managed a few crawlers, as seen in this picture. Still the best structure I’ve seen to date.” 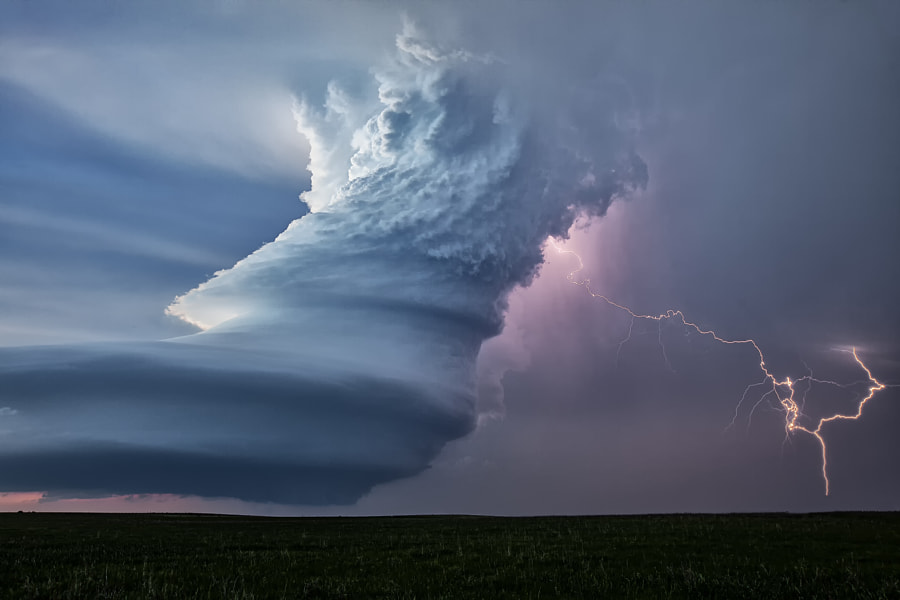 Roger Hill has seen and photographed more than 650 tornados, making him the Guinness Book of World Records holder for the number of tornados witnessed. Beyond that, he’s also seen thousands of thunderstorms and tens of thousands of lightning strikes. “I loved shooting this tornado warned supercell in Broken Bow, Nebraska,” he remembers. “It maintained this structure for over an hour. This was a ground-to-cloud discharge!” 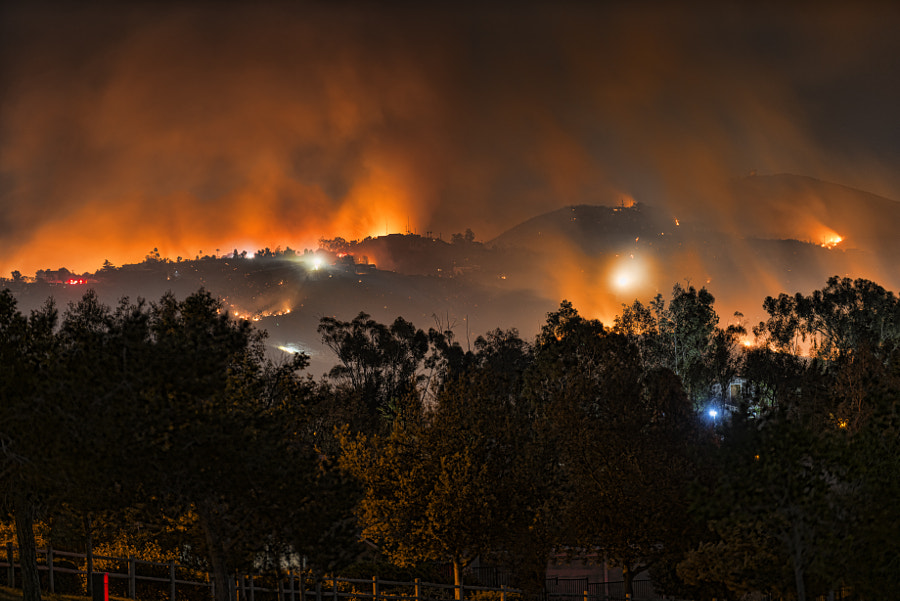 In 2014, Alan Crosthwaite documented the wildfires that hit the hills of San Marcos, California, in May. That year, the fires were unusual for their speed and timing, as they arrived months before the typical height of wildfire season. Cal State San Marcos was evacuated, as the fire raged, fueled by high winds, low humidity, and record heat. 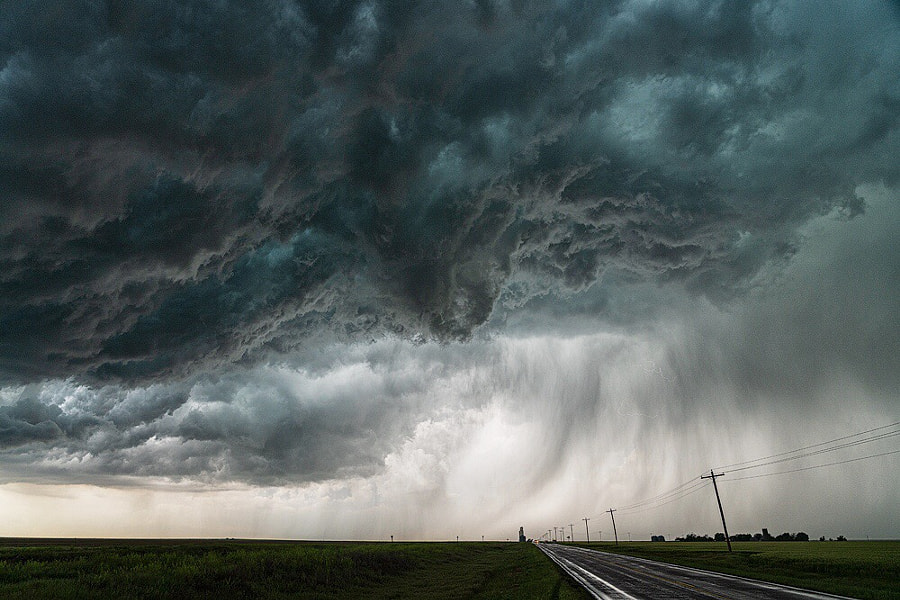 “The colors in these severe storms are surreal,” Robert Postma says, looking back on this picture, made in Wanette, Oklahoma. “The blue is caused by the light filtering down through hail that is smashing into each other in the clouds. This colliding leads to the ‘hail roar,’ which sounds like continuous thunder. Mesmerizing.”

🦸 Apply a Comic Book Drawing Effect To Your Photos in Photoshop!
What is Butterfly Lighting and How to Use It for Portrait Photos
The Power Junkie v2 Can Power Three Devices from One Sony Battery
Photography News: Canon Lens Rumors, Tycho Crater Up Close
Some Notes on AI, ChatGPT, and the Photography World