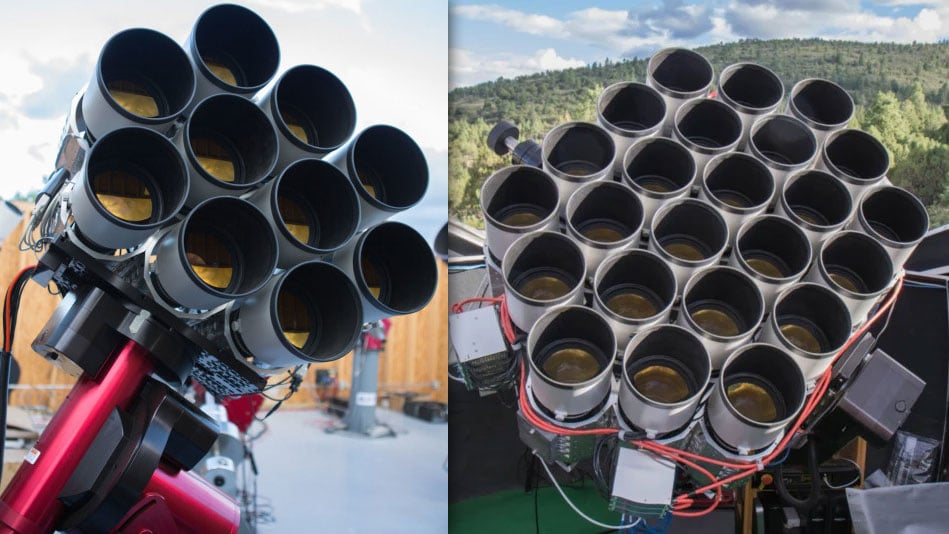 Project Dragonfly, designed by a team from Yale University and the University of Toronto in 2013 is an attempt to capture the darkest parts of the sky that are so faint that they’ve managed to escape the gaze of more conventional telescopes – even the really huge ones. The design was built using an array of 3 Canon EF 400mm f/2.8L IS USM II lenses to begin with in what they called the Dragonfly Telephoto Array.

It was expanded to 10 lenses and in 2015, Canon supplied 40 more EF 400mm f/2.8L IS USM II lenses to the team, bringing their total up to 48 in two 24-lens units. Now, with some more help from Canon, the team is going to put together four more of the Dragonfly Telephoto Array units for a total of 168 400mm f/2.8 lenses pointed towards the sky to capture the darkest galaxies in the universe. 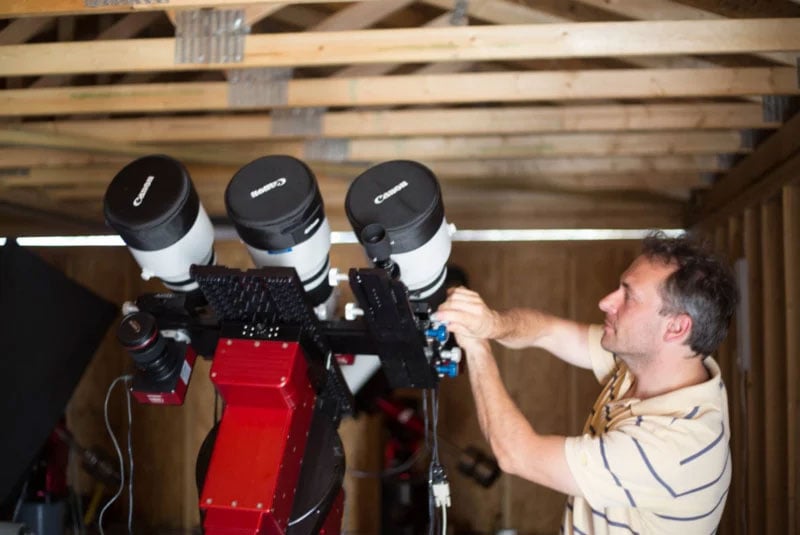 The lenses act as a kind of compound eye, looking up towards the skies from their home in New Mexico, with each one enhancing the abilities of the others. Think of shooting lots of images in your camera and then stacking and creating a final image by combining them all together. That’s sort of what’s happening here, only with multiple cameras simultaneously. Each lens is coupled together with a science-grade SBIG STF-8300M CCD camera and the whole rig is mounted on a Paramount ME-II mount.

The Dragonfly Telephoto Array is a telescope array equipped with multiple Canon large-aperture super-telephoto single focal length lenses – specifically, the Canon EF 400mm f/2.8L IS II USM lens. The telescope was designed in 2013 by Project Dragonfly, an international research team from Yale University and the University of Toronto. The Dragonfly Telephoto Array is capable of capturing images of galaxies that are so faint and large that they had escaped detection by even the largest conventional telescopes. Its mission is to study the low surface brightness universe to elucidate the nature of dark matter and to utilize the concept of distributed telescopes.

In support of this research, Canon provided technical assistance by supplying 40 Canon EF 400mm f/2.8L IS II USM lenses in 2015, expanding the array to 48 lenses with 24 telescopes bundled on two separate mounts. Since then, the research team has produced significant results in extragalactic astronomy, including discovering the ultra-diffuse galaxy Dragonfly 44 in 2016 and the identification of a galaxy that lacks dark matter, NGC 1052-DF2, in 2018.

At the moment, each telescope system stands at 24 400mm f/2.8L IS USM II lenses and there are two such systems. To put this into some perspective, if you wanted to build one of these 24-lens units for yourself, you probably wouldn’t get much change from $300,000. And Dragonfly is going to be running six of them soon, thanks to 120 more lenses being contributed by Canon. This would bring each unit up to 28 lenses for a total of 168 lenses and cameras pointed at the sky.

This time, Canon will provide technical assistance by supplying 120 Canon EF 400mm f/2.8L IS II USM lenses to the research team, further expanding the telescope array. With a total of 168 lenses, the telescope array has a light-gathering capability equivalent to that of a refracting telescope of 1.8 meters in diameter, with a focal length of only 40 cm, and is expected to open new windows on the universe.

The array has thus far produced some amazing imagery and the team says they’ve had some significant results, including the discovery of the ultra-dfifuse galaxy Dragonfly 44 in 2016 and the identification of NGC 1052-DF2, a galaxy that lacks dark matter, in 2018.

I can’t wait to see what a collection of 168 lenses all pointed towards the same subject at once can discover!