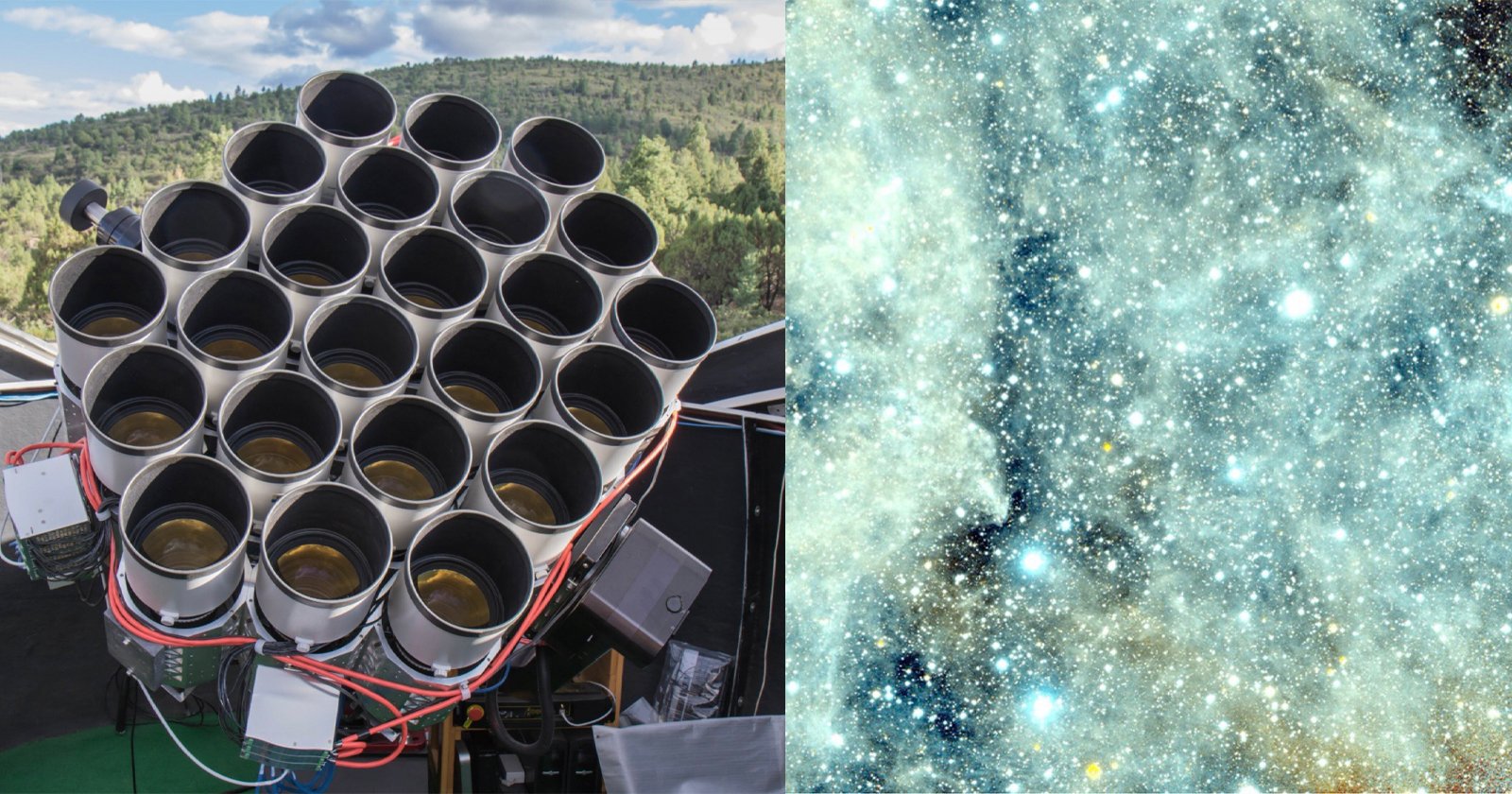 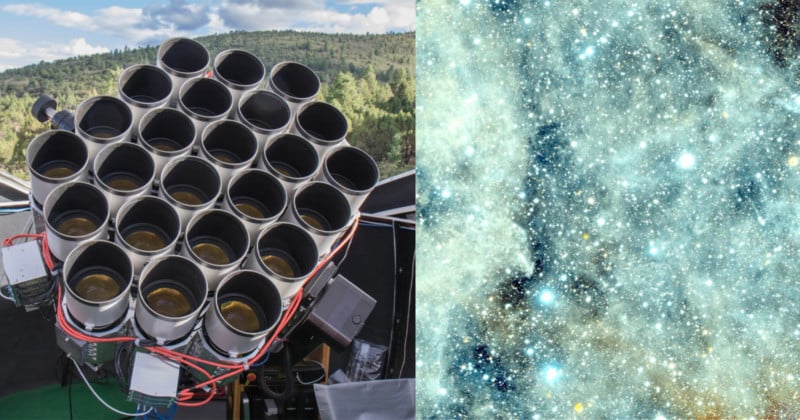 An international team of researchers has bundled groups of 24 Canon EF 400mm f/2.8 lenses together into what they call the Dragonfly Telephoto Array in order to capture photos of distant stars.

The Dragonfly Telephoto Array is a telescope that is equipped with multiple Canon 400mm f/2.8L IS II USM lenses. The telescope array was designed in 2013 by the team, also named Project Dragonfly, which is an international research team from Yale University and the University of Toronto. The Dragonfly Telephoto Array is capable of capturing images of galaxies that are so faint and large that they had escaped detection by even the largest conventional telescopes. Its mission is to study the low surface brightness universe to elucidate the nature of dark matter and to utilize the concept of distributed telescopes.

“The Dragonfly Telephoto Array is the pre-eminent survey telescope for finding faint, diffuse objects in the night sky,” the reseachers explain. “It has enabled us to discover ultra-diffuse galaxies and other low-surface brightness phenomena—rendering images that deepen our understanding of how galaxies are formed and providing key insights into the nature of dark matter.”

In support of this research, Canon provided technical assistance by supplying 40 Canon EF 400mm f/2.8L IS II USM lenses in 2015, which expanded the array to 48 lenses, with 24 lenses bundled together on two separate mounts. Since then, the research team has produced significant results in extragalactic astronomy, including discovering the ultra-diffuse galaxy Dragonfly 44 in 2016 and the identification of a galaxy that lacks dark matter, NGC 1052-DF2, in 2018.

Canon will be expanding its support of the project and will be providing technical assistance to the team as well as an additional 120 EF 400mm f/2.8 IS II USM lenses, adding to the original batch it provided six years ago.

“With the addition of 120 of these lenses, in a newly developed configuration allowing extremely narrow filters to be used, Dragonfly will be the most powerful wide-field spectroscopic line mapping machine in existence,” the researchers say.

“A major goal of the next iteration of the Dragonfly array is to detect and study the faint gas thought to exist around and between galaxies. By opening this new window on the cosmos, Dragonfly will tackle some of the most critical questions in astrophysics today.”

With a total of 168 lenses, the telescope array has a light-gathering capability equivalent to that of a refracting telescope of 1.8 meters in diameter, with a focal length of only 40 centimeters. Canon and Project Dragonfly expect the additional capability “to open new windows into the universe.”

7 ways to make the most of your location and create content that sells
How to Develop B&W Film at Home: A Simple Guide for Mere Mortals
Rode’s NTH-100 headphones are now a headset with the new NTH-Mic microphone
The Advantage of an Inconspicuous Camera
✨ Match Skin Tones From Another Photo in Photoshop