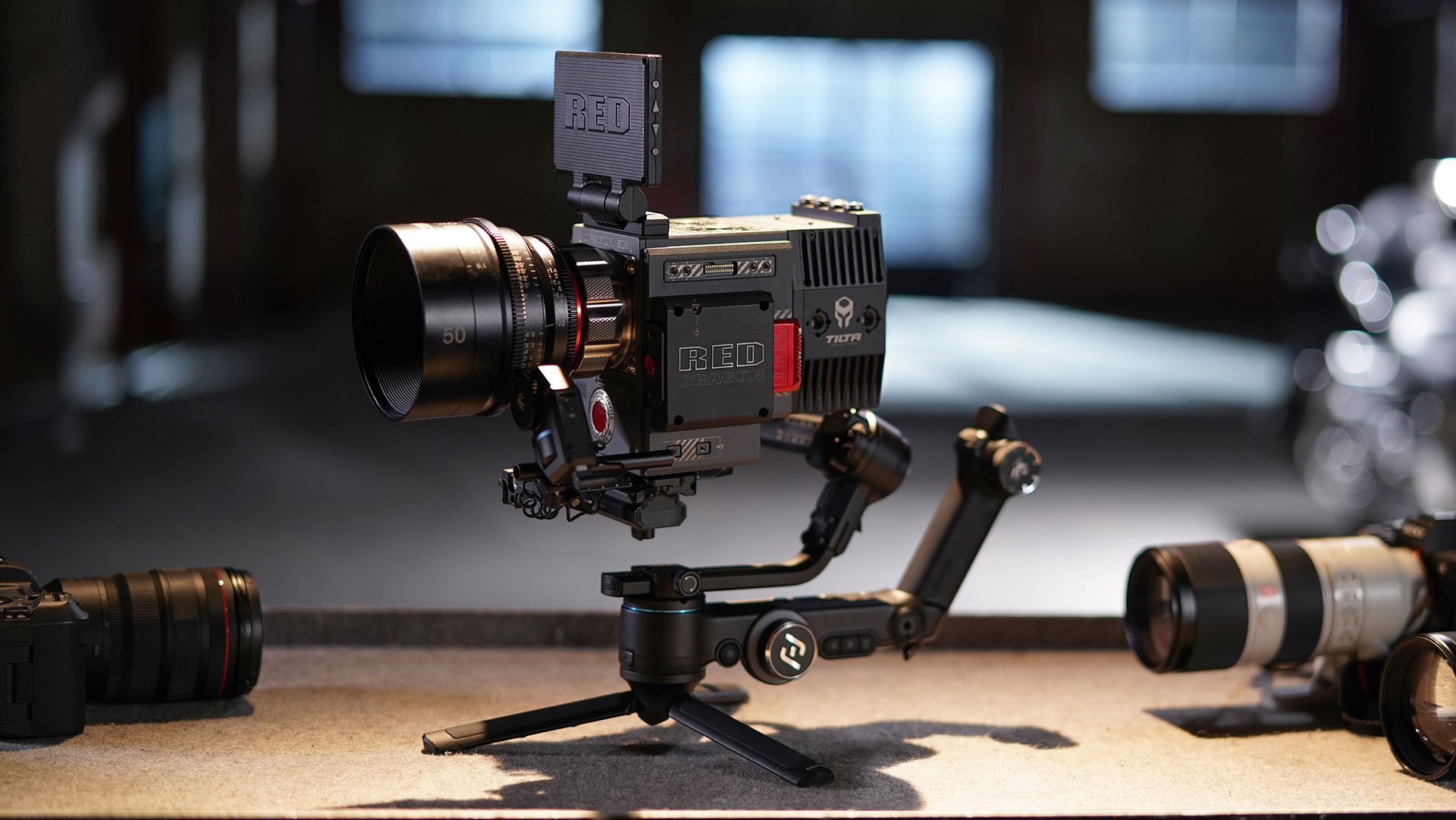 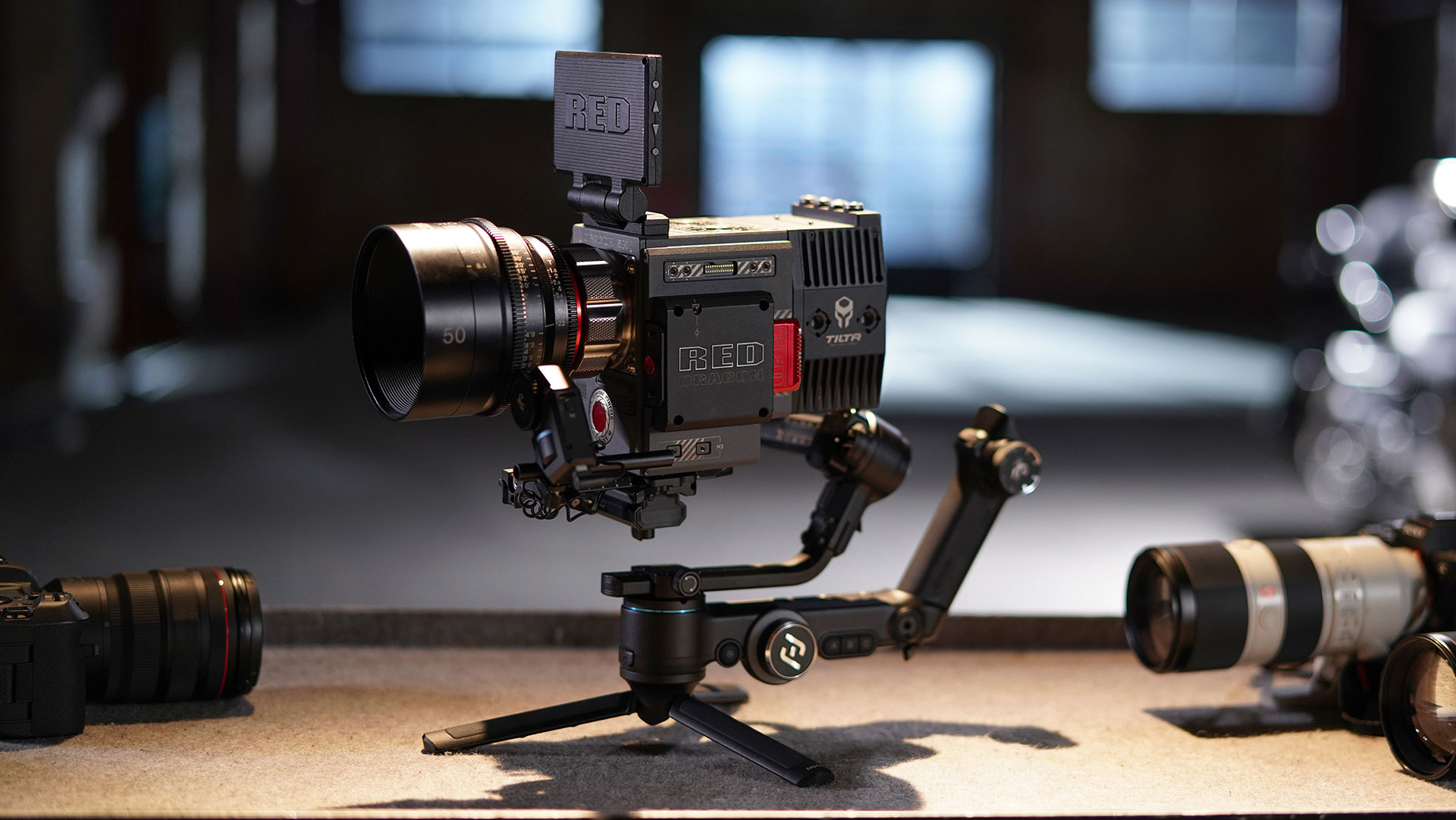 Feiyutech has announced two new motorised 3-axis gimbals. These are the Scorp and the Scorp Pro. Unlike many other gimbals, though, the “Pro” model isn’t just the regular gimbal with a bunch of extras added. In this case, it’s actually a completely different gimbal. Like the regular Scorp, but modular, adding a lot of versatility and shooting options over the basic model Scorp.

The Scorp is a motorised 3-axis gimbal with a design that reminds me of the Zhiyun Weebill 2 if the handle were permanently attached – but without the cool flippy out LCD. The Scorp Pro, on the other hand, appears to be like a scaled-down version of the Crane 3S, with removable handles for both the base and rear underslung mode.

Despite looking a bit like a Weebill 2 with a built-in rear handle, the Scorp does have some differences. For a start, there are flip-out feet built into the underside of the handle, allowing you to set the gimbal down on a flat surface without having to keep a mini tripod permanently attached or preventing you from having to scramble to find a mini tripod and then screw it in when your arms are already tired.

While it doesn’t have the flippy out LCD of the Weebill 2, the Feiyu Scorp does have a 1.3″ touchscreen display and a magic wheel controller for focusing or movements on all three axes. A 5-way balancing system allows you to quickly and easily balance your camera on the gimbal.

A built-in 2500mAh battery provides up to 13 hours of life, with 18W USB-PD fast charging to let you get back up to full power in only 1.6 hours. You’ve got 2.5kg of load capacity – although Feiyu does specify that this is with a well-balanced setup. It operates in temperatures of -10 to 45°C and offers tilt & roll axes of 340° and a full 360° unlimited pan. An Arca compatible quick release system is used to attach your camera and it’s compatible with a number of cameras from Sony, Canon, Nikon and Panasonic with several cables included. And once it’s on, you’ll get Pan Follow, Pan Tilt Follow, FPV, Lock and Flash Follow “FFW” mode (which is basically like a fast-acting sport version of FPV).

The Feiyu Scorp is available to pre-order now for $429 from the Feiyutech website.

The Scorp Pro beefs up the capabilities of the basic Scorp while providing more versatility and functionality. It takes a heavier payload of up to 4.8kg. While Feiyu does say it’s been designed with the Sony A7 series in mind, like the Scorp, it’s compatible with other Sony, Canon, Nikon and Panasonic cameras (a bunch of cables are included for various cameras from several manufacturers).

The biggest obvious difference between the Scorp and Scorp Pro is that the bottom and rear underslung handles are removable, allowing you to cut down on the size and weight of the gimbal to attach it more easily to other rigs where space is constricted or to or mount it to something like a vehicle where keeping a low and tight centre of gravity helps to ensure your gimbal doesn’t come flying off the vehicle when you’re whizzing around corners.

The Scorp Pro is a touch heavier than the Scorp. Ok, more than a touch, it’s 900g heavier, coming in at 2,100g vs the 1,200g of the Scorp. But, it does have that heavier load capacity. And despite having a beefier battery, it actually has a little less battery life, coming in at 12 hours. It also takes significantly longer to charge – around 2.75 hours using 18W USB-PD fast charging.

The batteries in both gimbals are 2500mAh, but the Scorp Pro has twice as many of them to double the voltage (hence the longer charge time) for those beefier motors to handle stronger loads. Those beefier loads also drain the batteries much quicker (hence less overall running time). Still, 12 hours is nothing to be sniffed at. It’s going to handle most days and you can charge it while you’re using it, too.

You get all the same gimbal modes as the Scorp, along with the adjustment wheel for focus and other features, the touchscreen display, the same pan/tilt/roll capabilities, etc. There’s a difference in the quick release mounting system, though. Instead of using more photographer-friendly Arca compatible plates, this one uses the mode video-centric Manfrotto plates – as found on most other gimbals in this part of market.

The Feiyu Scorp pro is available to pre-order now for $659 from the Feiyutech website.

Both gimbals look quite good, although with the number of gimbals available on the market today, the Scorp might have a tough time competing. The Scorp Pro, on the other hand, offers some unique advantages over what else is out there that might just give it the edge for some users.