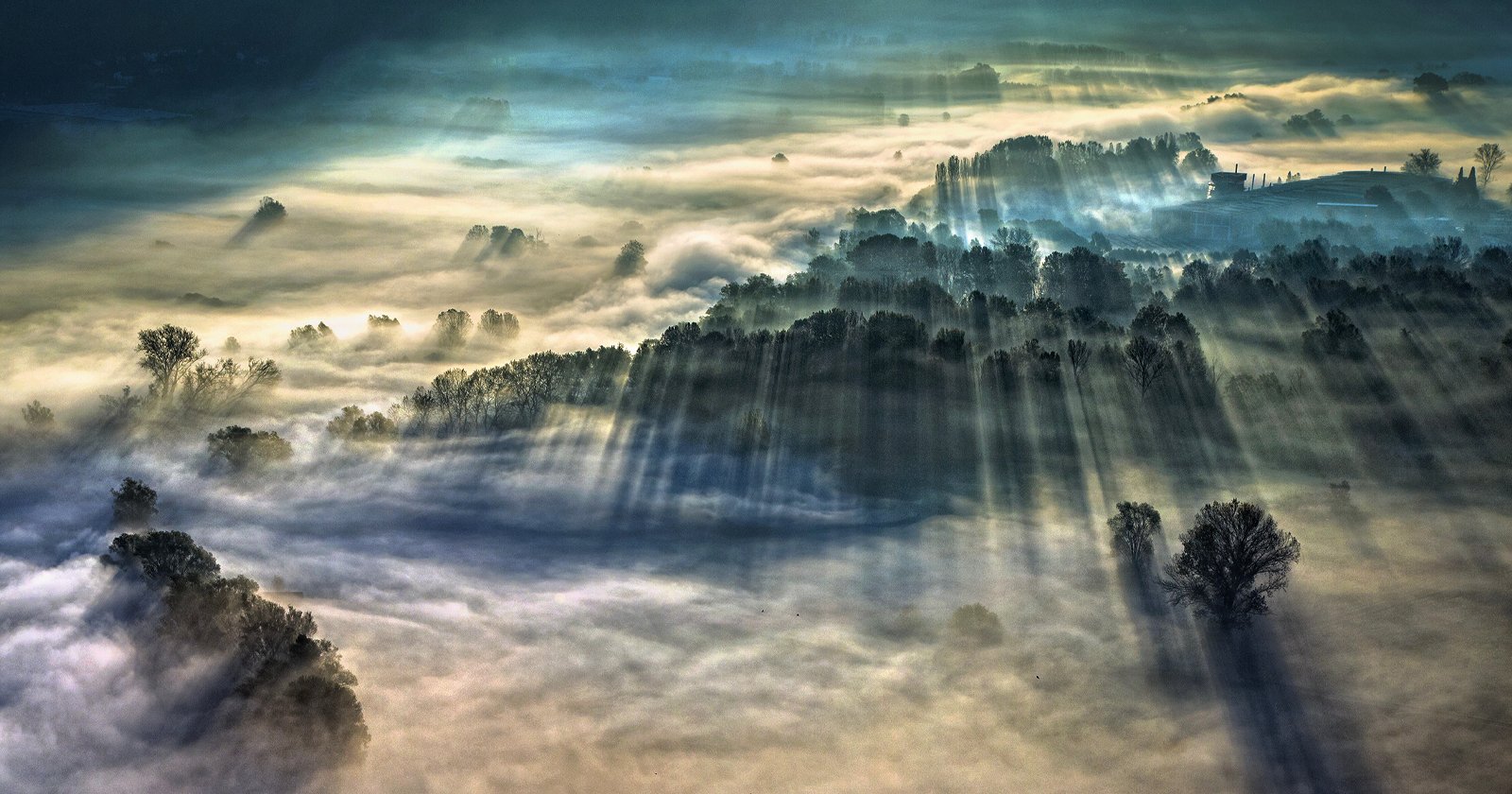 The Royal Meteorological Society (RMS) has announced the winners of its annual Weather Photographer of the Year competition which it hosts in association with AccuWeather. A photo of early morning fog in a hilltop town in Italy took top honors.

The annual competition, now in its sixth year, shortlisted 21 photos that were chosen from 8,900 total that were taken by more than 3,300 photographers from 114 countries.

“Morning Fog” by Giulio Montini was chosen as the winner of the Weather Photographer of the Year category. Shown above, it depicts an opaque autumn day from a small church on a hilltop in the down of Airuno, Italy. Airuno is located in the province of Lecco in the Lombardy region, which is one of the northernmost regions of the country.

Giulio captured this image on a foggy autumn day from a small church on a hilltop in the town of Airuno, Italy. Through the fog and with the help of the trees, you can just about see the winding course of the river Adda, illuminated by the first lights of sunrise.

The streaks or beams of sunlight visible in this image are called crepuscular rays. They are made visible by the scattering of sunlight by particles suspended in the atmosphere, such as small water droplets, dust or smoke. Usually, crepuscular rays radiate through gaps in the clouds, but in this photo, the trees take the place of the clouds, casting shadows across the landscape, and the fog scatters the sunlight. Giulio had to be quick to take this photograph as within 20 minutes the scene had completely changed.

“This photo can only be taken from one point. There is a small church on top of a hill in the town of Airuno, in the province of Lecco in Italy. Under the mist passes the river Adda. In the autumn months, on some days, it is possible to see this show with the first lights of sunrise. After 20 minutes, everything is over.”

Below are the two runners up in the main category:

Evgeny took this self-portrait using a Quadcopter at Lake Kok-Kol in Russia. To Evgeny, the uniqueness of the photo lies in his experience of the weather behind the lens – it changed so significantly in the time he was there that he felt the seasons shifted not only between days but over just a few hours.

To capture this shot, he waited for the first snow to fall, which then covered the ice on the lake like a white blanket, leaving areas of open water as vivid streaks in the white.

Just a couple of hours after taking this photo, Evgeny said the whole lake was covered with white snow and winter came into its own.

After driving over 300 miles, waiting for eight hours and a half-night sleeping in the car, Serge finally captured this forecasted thunderstorm on a full-moon night over the famous Bay of Cannes in the south of France.

“This thunderstorm unleashed several thunderbolts in the clear sky under the stars. There was no rain, no parasite clouds, just the calm of the night and the sound of thunder – ideal conditions!”

Lightning is a large electrical spark produced by electrons moving quickly from one place to another to neutralise two charged regions – this can be within the cloud or between the cloud and ground. It is the collision of small ice crystals with larger and denser graupel (soft hail) within a thunderstorm that transfers electrons from one to the other. The storm updraught then carries the positively charged ice crystals to the top of the cloud whilst the negatively charged graupel falls towards the bottom. Once the opposite charges build up enough, the insulating property of the air breaks down to form lightning. The air surrounding the lightning channel briefly reaches temperatures of up to 30,000-degrees Celcius, causing the air to rapidly expand, which we then hear as thunder.

Young Weather Photographer of the Year

Phoenix captured this image of an approaching supercell in Kansas, USA. A supercell is a thunderstorm with a deep rotating updraught, called a mesocyclone. They are powerful storms that can produce some of the most severe weather, including tornadoes, large hail, damaging wind gusts and torrential rain.

Over the Great Plains of the central USA, supercell thunderstorms frequently develop during a well-defined storm season that runs approximately from April to June, peaking in May.

Just below the blue-green colouration in the storm, you can see a shelf cloud. Also known as an ‘Arcus’ cloud, it can be easily identified by its menacing, wedge-shaped formation as a rain-cooled airs flows out of a thunderstorm. Despite their appearance, they are relatively harmless. It’s better to consider them as an indicator of potentially imminent severe weather.

Severe thunderstorms are the most common and most damaging type of storm in New South Wales. Australia classifies a thunderstorm as ‘severe’ if it produces any of the following: hail measuring more than 2cm in diameter, wind gusts above 90 km/h, tornadoes, or heavy rain that leads to flash flooding.

Christopher took this image of the Qasr Al Hosn, one of the oldest landmarks in Abu Dhabi, UAE, in December 2020 when the temperature dropped.

He was on his way home after dropping his wife at work when he saw the fog forming. Immediately, he took out the only camera he had – his mobile phone – and captured this beautiful shot.

Fog is the term used to describe the suspension of water droplets in the surface layer of the atmosphere, which reduces horizontal visibility to less than 1km. Around 95% of the fog observed in the UAE is radiation fog and is most common in the winter. This type of fog forms over land when radiational cooling reduces the temperature of the near-surface air to below its dew point. The other 5% in the UAE is advection fog, forming when warm, moist, and stable air moves over a cooler surface.

Christopher is thankful for the opportunity the weather gave him to capture this beautiful image. It will stay as a memory forever.

On a typical May evening on the east coast of Ireland, Susan headed out to her cockapoo Evie’s favourite playground, the South Beach, Greystones.

The minute she stepped onto the sand, the dark clouds gathered, and the heavens opened. Susan describes it as that beautiful warmish rain mixed with low evening sunshine.

As she meandered along, regretting just wearing a t-shirt, she was rewarded with this beautiful double rainbow, as well as a third bow, which was invisible to the camera. She took a couple of snaps on her phone to remember the stillness and emptiness of the beach with only the elements and weather for company.

Rainbows form due to the refraction (bending) and reflection of sunlight as it passes through raindrops. Clearly shown here, the colour banding in the secondary outer bow is in the opposite direction to the primary bow, which happens when the light is reflected twice off the back of the raindrops.

The full set of winning images as well as a list of the finalists can be seen on the Royal Meteorological Society website.

Photography News: Canon Lens Rumors, Tycho Crater Up Close
7 ways to make the most of your location and create content that sells
Sigma 20mm f/1.4 DG DN Art lens – Hands-On Review
Sony is Raising the Price of Cameras in Japan by 14% on February 1
Photographer falls 80 feet to his death while shooting from a parking garage