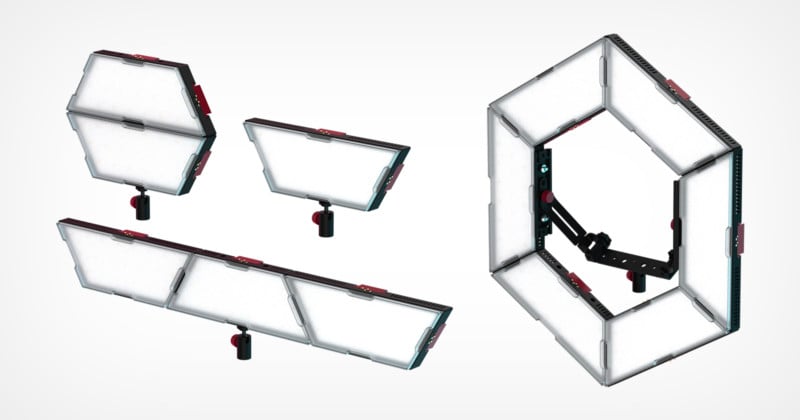 The Aptolux MP-1 is a portable, lightweight, and modular lighting system that has the ability to change its size or shape depending on the need. The company says it prevents the need to buy multiple lights and is highly repairable if damaged.

Aptolux is the brainchild of photographer and filmmaker Alvis Rozenbergs, who tells PetaPixel that he has spent the last two years working on a new modular lighting system that solves many pain points that he ran into during his nearly decade-long career: heavy, single-function lights that are costly to buy and just as expensive to repair.

To address these issues, Rozenbergs created the Aptolux MP-1, a modular lighting kit that consists of six panels that can be combined together into different shapes and forms depending on the need of the creator. Disassembled, and they are about the size of a lunchbox and can be easily fit into a backpack.

“I have been filming for over 10 years now. Shooting in different locations has always been a big part of the job and trips between them can be challenging. Carrying bags with all the necessary equipment or having to make the choice among all lighting options wasn’t always easy, so I decided to build portable and versatile video lights myself,” Rozenbergs says.

Rozenbergs adds that before developing the product in its current state, he worked with more than 100 videographers from around the world who helped him with building out the concept for the light. After it was prototyped, a second round of more than 500 videographers provided feedback and suggestions before the current iteration of the product was completed. Rozenbergs says that the long-term goal of the company is to offer gear that removes restrictions, nourishes creativity, and helps videographers evolve. 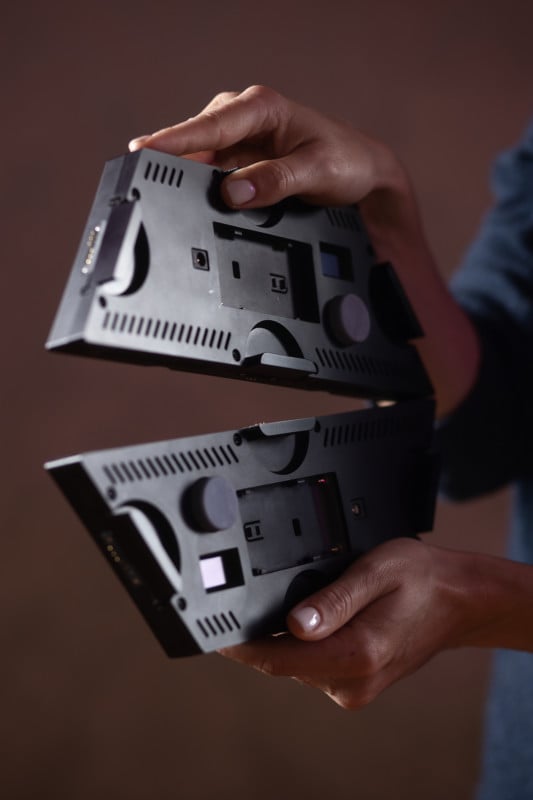 The lights have variable color temperature from 3,000K to 6000K, dimming from 0 to 100%, can be powered by a battery (Sony L-Series batteries) or a wall outlet, have more than 30 animated lighting effects, feature full RGB tuning, and have a promised color accuracy CRI of 96 (TLCI of 97).

The lights are bright as well. Each individual panel consumes 20 watts of power over 39 individual LEDs for a brightness of 2,000 lumens. When combined into a full six-piece panel, the total 234 LEDs output a huge 12,0000 lumens. Perspectively, the exceedingly bright Light & Motion CLx10 monolight outputs 10,000 lumens. 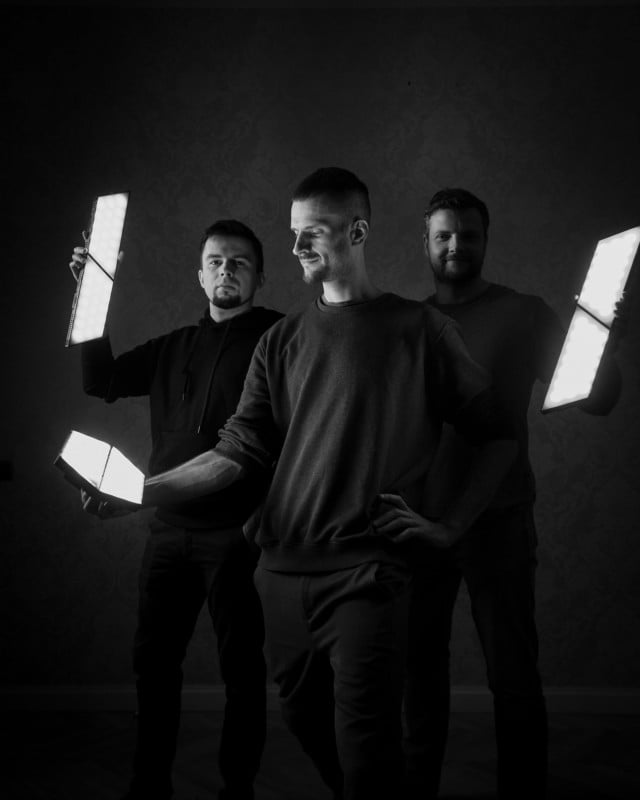 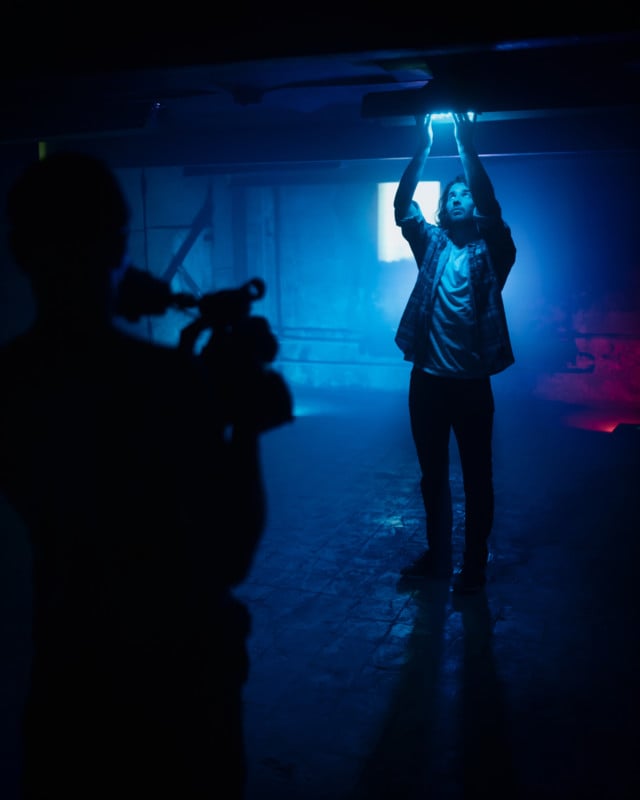 Each individual panel can be used independently or in a group to create all manner of shapes and arrangements.

Solo videographers and small teams have to bring their gear by themselves, but often space in the backpack or even in the car is limited. So the difficult choice should be mad: whether to bring all the lighting equipment, if it is even possible, or choose only a few lights, losing the flexibility and even quality while filming? The solution created by Aptolux won’t force them to make tough decisions anymore.

While the light was originally developed with filmmakers in mind, Rozenbergs says he has gotten a lot of positive feedback from food photographers, who he says tell him that since they shoot all around the country in different restaurant sets, mobility is really important to them. 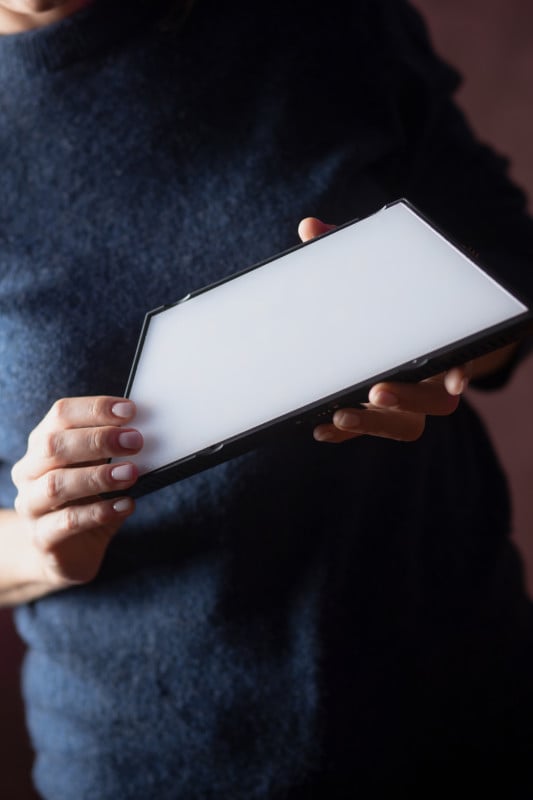 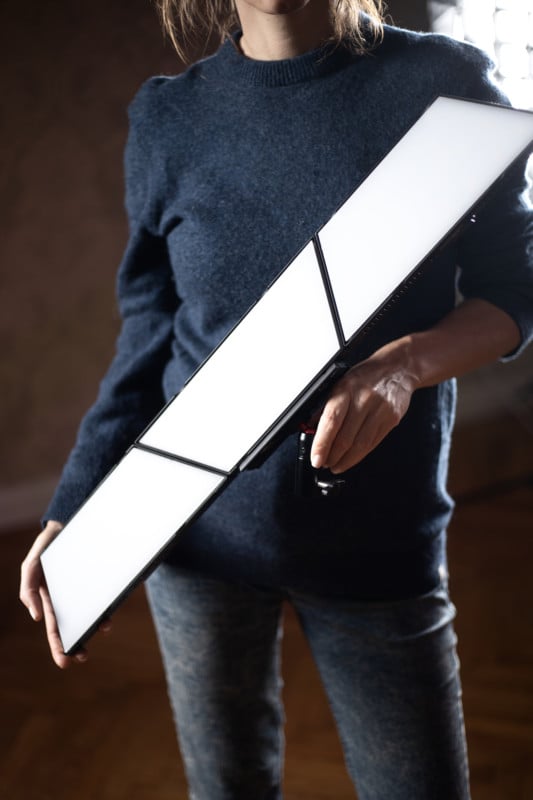 The Aptolux MP-1 is currently available for the first run of production via pre-order that is open until November 18 and is limited to 1,000 total kits. The starter kit which includes two panels is available for $300, a four-panel kit for $600, and the full six-panel kit for $850, all of which are discounted 40% from what Aptolux eventually intends to sell them for during this “early bird” period. The company also plans to sell a variety of accessories and additional parts which can be seen on the company’s website.