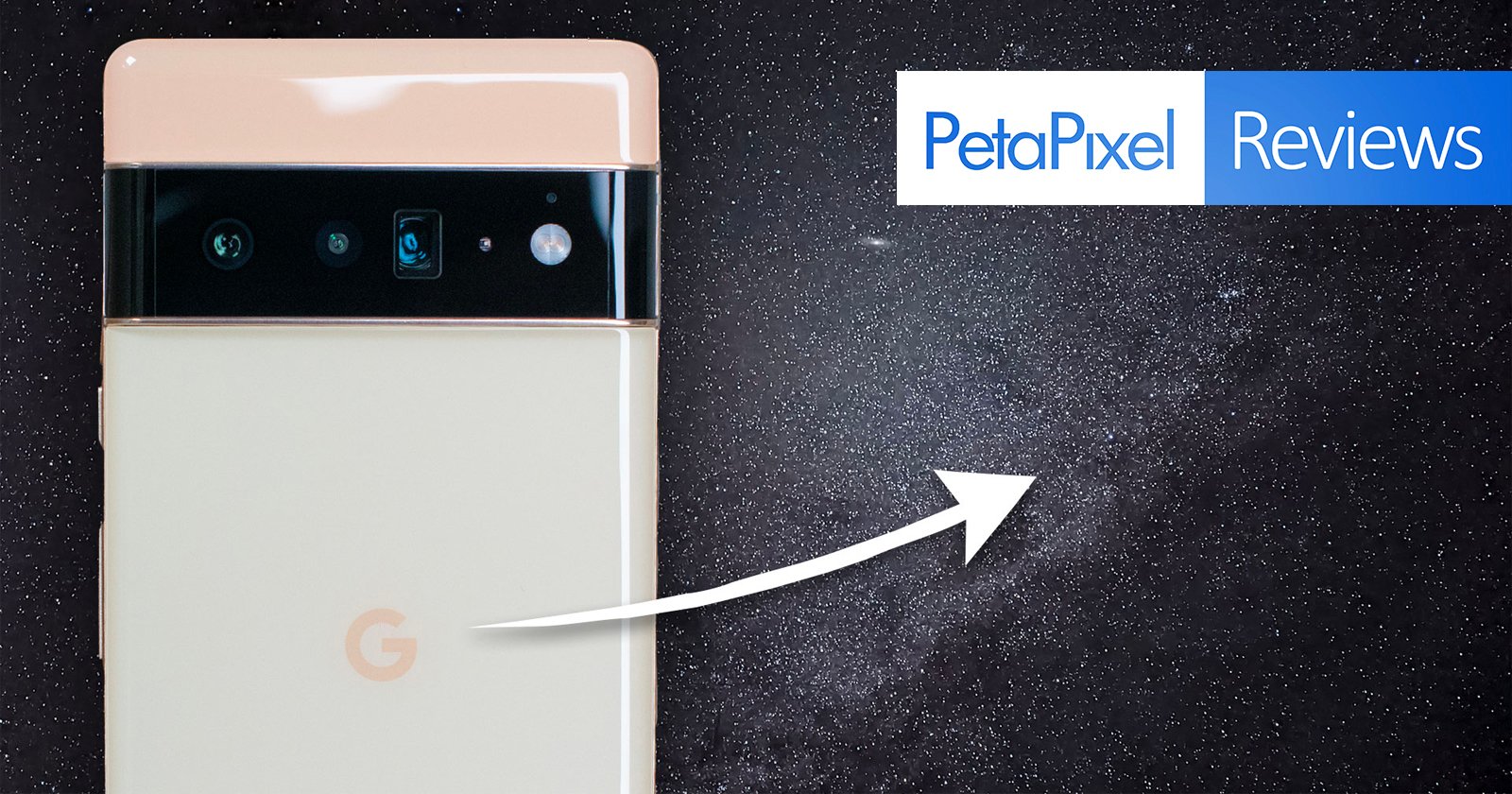 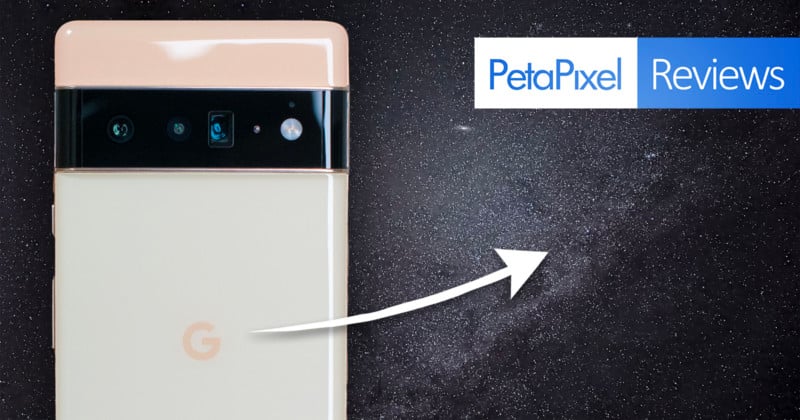 There are two things a camera should have to be good at astrophotography: a large image sensor and the ability to manually control camera settings. Yet somehow, the Google Pixel 6 Pro manages to capture stunning astrophotographs with the press of a single button. The image sensor, though much bigger than previous iterations of the Pixel line-up, is still tiny in comparison to mirrorless or DSLR cameras. But it’s the powerful machine-learning software within that makes the Pixel 6 Pro so good at capturing the stars.

So just how does Google’s latest flagship smartphone manage to produce photos that are star-studded, with minimal image noise and stunning clarity? I decided to put the Google Pixel 6 Pro to the test, focusing on a few key areas. I’ll be taking into account its ease of use, how Artificial Intelligence (AI) processes photos to clean things up, its color handling ability, and I’ll also take the photos into post-processing software to see whether it’s better to shoot JPEG or switch over to RAW — the results might surprise you!

While PetaPixel has given the Pixel 6 Pro high marks overall and currently lists it as the best smartphone to leverage computational photography, in my eyes, it is also probably the best smartphone you can buy right now to capture night sky images. I realize not everyone buys a smartphone for this ability, but for those stargazers who want the convenience of astro shooting in their pocket, then this smartphone is the one to go for. For my money, the Pixel 6 Pro is not just a stopgap before you reach for a mirrorless or DSLR, it’s probably the fastest and easiest way to capture the galaxies with crisp precision.

Gone are the days of setting up your mirrorless or DSLR, squinting at the screen as you try to pinpoint focus on a dim star in the sky. There’s no need to calculate aperture, shutter speed, and ISO sensitivity, or warm up the lens barrel before shooting. All you need is the Google Pixel 6 Pro and a tripod.

Shooting astrophotography with the Pixel 6 Pro is an absolute doddle. There are two options for shooting in low light with the smartphone: Night Sight mode and Astrophotography mode. They each aim to overcome specific problematic shooting conditions.

Night Sight, which has been around on Pixel smartphones since 2018, works by using Artificial Intelligence to create well exposed low light scenes when shooting handheld. It looks for camera shake blur, motion blur, and other issues such as high image noise, and then works autonomously to remove them from the final shot.

Astrophotography mode, however, only appears when using Night Sight and the phone is completely still. It’s best to mount it to a tripod (I’ve used the Joby Gorillapod and accompanying phone holder with my Pixel 6 Pro) but you could also just prop it up on a rock.

One thing I really like about the astrophotography mode is that it displays a countdown timer on the screen. By counting down the exposure time, the average user is free to think about other things, rather than concentrate on technical settings such as shutter speeds and ISO. For pros who like shooting in manual mode this lack of control might be a little frustrating, but let’s face it, if you’re going to be shooting professional-grade astro images you’re not going to be relying on a smartphone.

Another great feature is the level which appears when the phone reaches near-level. It appears as two lines, one labelled by degrees of how far out of alignment the phone may be. If you hit 0 degrees (completely level) then the Pixel vibrates slightly which makes it easy to get horizons dead straight without faffing.

Overall, color handling is good in the Pixel 6 Pro. The majority of the time the white balance is spot-on and does an excellent job at riding the fine line between reducing light pollution and keeping colors realistic. Occasionally though, it’s a little inconsistent. Swivel the camera round and take four or five different astro shots and you’ll likely end up with two or three different white balances. For example, a shot including the skyline of a distant city will produce a much warmer photo than one taken straight up at the stars with no foreground.

Tapping the scene while shooting provides on-screen sliders to control highlights, shadows, and the color temperature. Though, if you’re in astro mode the movement from the vibrations from the tap will likely send it into Night Sight mode, so you’ll have to wait a few more seconds before it switches back. It’s a shame that the astro mode isn’t an option you can lock into like Night Sight is, and is definitely something I’d like to see added in a future update.

The magic of Google’s new Pixel phones cameras isn’t in the hardware, even if it’s been updated for the latest line-up, but rather resides in the sophisticated AI-powered software that processes the images. I’m incredibly impressed by the Pixel 6 Pro’s JPEG handling when shooting astro as it reduces image noise astonishingly well, balances colors evenly, removes color artifacts, and also applies lens corrections to remove vignetting and lens distortions.

However, the phone does also offer the ability to shoot RAW files alongside JPEG. Normally when shooting any kind of photography, I always opt for shooting RAW and rarely bother with JPEG capture. But Google has done such an excellent job at automatically addressing imaging issues in the astrophotography mode that I’m considering making an exception for the Pixel 6 Pro.

These three photos below show the difference between the Google Pixel 6 Pro’s JPEG image, straight out of camera, a processed RAW version, and those same processed settings applied to its JPEG image. Personally, I think the processed JPEG looks the best:

I imported the RAW files to Lightroom Classic and went about my usual processing techniques to remove noise, get good color balance, and let the stars shine, but I found that I couldn’t process the image as clean as the JPEG file it produced on its own. No matter what I did in Lightroom Classic, I was still left with some color artifacts and image noise. That said, I was able to tease out more detail in the RAW files as is to be expected. Sadly though I wasn’t able to make lens corrections due to the fact Adobe has not yet to incorporate the profile into Lightroom Classic.

After synchronizing the settings between RAW and JPEG files I think I actually prefer the look of the JPEG. I think this is all due to Google’s imaging algorithms whirring away in the background tweaking the shots during capture, but if it works, it works.

Areas That Could Be Improved

What is the first thing you think of when picturing astrophotography? If you’re anything like me, it might be a beautiful, wide vista with an expansive sky overhead. The Pixel 6 Pro’s new ultra-wide lens would be ideal for this kind of photography, but unfortunately, astro mode can only engage when using the standard lens at 1x or 2x zoom.

It would be great to utilize the new ultra-wide lens for astro to fit more of the night sky into frame, and perhaps this is something we’ll see in future editions of the Pixel line. Disappointing though it is for the Pixel 6 Pro, it’s not a deal-breaker. As you can see from the example images it still captures a decently wide field of view on the standard lens.

It would also be good to see and set color temperature values when capturing astro shots, which would benefit the cohesiveness of not only a series of shots but also the timelapse function.

The phone is susceptible to some lens flare and glare from light sources, even though in-built software is designed to intelligently reduce this as much as possible. This isn’t much of a problem when shooting during the day, but becomes more apparent with the longer exposures required for night photography. Passing car lights or flashlights easily flare across the lens, spoiling astro shots. While a lens hood would probably be asking a bit much of a smartphone, it would be nice to see some kind of improvement on lens shielding.

Stellar Results for a Compact Camera

A look at the price for the Pixel 6 Pro reveals that it’s extremely competitive at just $899. Price, along with the sheer number of incredible features the Pixel 6 Pro has including 4x optical zoom, an ultra-wide lens, and fantastic low light/astro shooting features means I can’t see why anyone would voluntarily opt for a compact point-and-shoot camera these days where convenience is paramount.

Overall, for a smartphone that can shoot astrophotographs as competently as this, the Pixel 6 Pro can’t be beaten. This is certainly its specialty and it performs extremely well. I’m sure with future software updates we’ll see this pushed even further, especially now that Google has a smartphone with new camera hardware and the self-created Tensor chip living inside.

Yes, especially if you’re looking to upgrade your smartphone and are thinking of purchasing a point-and-shoot camera for astrophotography. There’s no need to get those two devices separately if you opt for this smartphone, and you’ll probably save a bit of money too. Thanks to the smart processing in the Pixel 6 Pro and freshly updated camera hardware you can easily capture astrophotographs so detailed that the Milky Way and other galaxies, constellations, and more are within reach. And all from something that slips into your pocket.