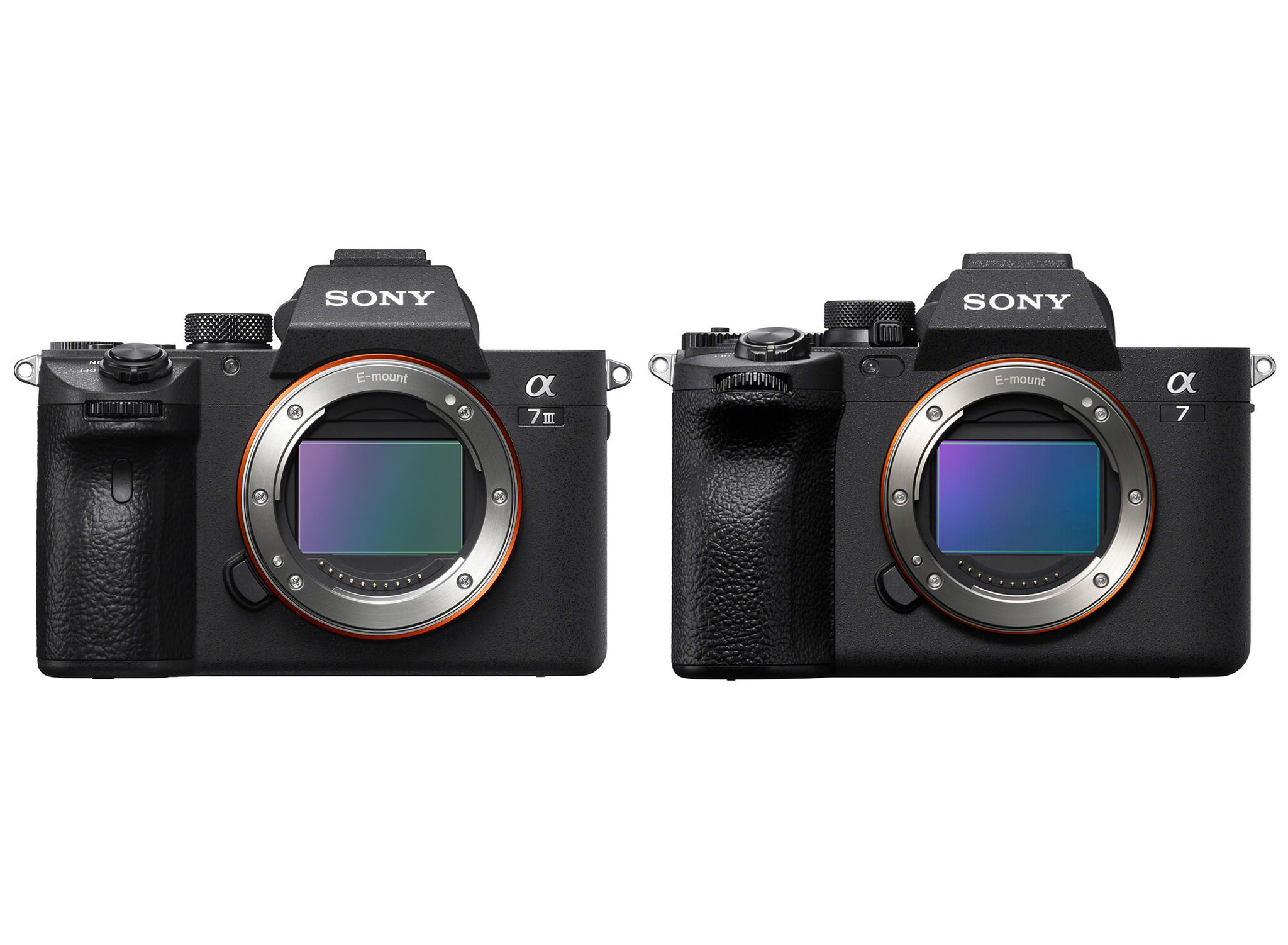 Now that Sony has announced the A7 IV, a lot of photographers are wondering what it brings to the table compared to the previous generation A7 III. Sony is still selling the A7 III new ($2000, compared to $2500 for the IV), which adds to the confusion.

In this article, I’ll compare the specifications of the Sony A7 III and A7 IV in detail and explain which one I recommend to photographers today. Certainly the A7 IV is the more advanced camera, but do its new features justify the price?

Let’s start by taking a look at the design of the two cameras. Sony largely kept the construction the same but did make a few nice design changes on the A7 IV.

Let’s start with the front of the camera. The Sony A7 III is on the left, and the Sony A7 IV is on the right:

Other than the nameplate (“7III” versus just “7”), there aren’t many obvious differences. The angle of the front dial is a bit different and arguably more ergonomic on the A7 IV, but the two are largely the same at the front.

Here’s the back view, again with the A7 III on the left and the A7 IV on the right:

This time, there are a couple minor differences. The movie record button on the A7 III has been replaced with a custom C1 button on the A7 IV. We can also get a glimpse of the top panel, where the PASM dial on the A7 IV has a secondary dial beneath it, which controls your shooting mode (such as stills versus video). You’ll also notice that the rear LCD screen on the A7 IV has the necessary lever on the left to allow the screen to articulate fully.

Now let’s look at the top panel, still with the A7 III on the left and the A7 IV on the right:

Sony has simplified the PASM dial, removing the Scene and Movie modes and adding a third custom setting along the way. The new movie record button is up top where C1 used to be, and the exposure compensation dial now has a locking button in the center. Overall, the A7 IV’s design changes are small but welcome refinements.

Also, what isn’t immediately visible here is that the A7 IV has some additional programability compared to the A7 III. For example, you can now customize the function of the exposure compensation dial. And in manual mode, you can select which of the dials changes what setting, rather than the dials being pre-assigned.

I doubt that any of these changes are enough to make you switch to the A7 IV on their own, but it’s still nice to see Sony improving their layout over time. It should make for a somewhat smoother camera in day-to-day use without being so different as to give long-time Sony users a steep learning curve.

Now let’s take a look at the biggest things that Sony changed in the specifications from the A7 III to the A7 IV.

The new A7 IV is certainly a more advanced camera than the prior A7 III. Few of the differences are dramatic on their own, but they’re numerous and spread out across enough areas that almost any type of photographer will find something they like better. Some of the highlights are the higher resolution sensor, the fully articulating rear LCD, the improved menu system, the newer autofocus system, and the bigger buffer.

By comparison, the A7 III is only ahead in a few minor areas. It has more FPS when shooting uncompressed raw, a marginally longer battery life, and an almost imperceptibly smaller form factor. Otherwise, the only big reason to get the A7 III – and the reason why Sony is still selling it new and seems to have no plans to discontinue it – is the price.

The difference between the two cameras is $500 if you buy them new. That’s substantial in its own right, not to mention that the A7 III has been around long enough that it sells used and refurbished for fairly low prices. Used copies routinely go for under $1500, and I’ve seen them as low as $1200 in good condition.

So, which of these two cameras should you get? Despite the sudden 180 from some YouTubers about the apparently diminished quality of the older A7 III, both are very capable machines in the right hands. You really can’t go wrong with either. (Of course, this impression is pending our full-length review and lab tests of the A7 IV at Photography Life.)

That means it’s down to the usual conundrum: price versus features.

However, if the difference in price is higher – for example, if you’re buying used – my recommendation reverses. The A7 III is easy to find more than $1000 cheaper than the A7 IV on the used market, and at that point, it’s generally the better deal. Photographers on a tight budget will find their money is better spent on a used A7 III and a top-notch lens rather than the A7 IV with low-quality glass.

So, that’s my recommendation. Either buy the A7 III used for under $1500 if you’re on a budget, or the A7 IV new for $2500 if you have more cash to spend. The one thing I recommend against these days is buying the A7 III new, since the current price of $2000 is a bit high in my opinion. (That’s actually the same price as it was at launch.)

Finally, if you already have the A7 III, my recommendation is to stick with it. It’s expensive and usually unnecessary to upgrade every time a new generation of camera is released. Wait a few more years, or make a bigger jump to something like the A7r IV, A9 II, or A1 if you can’t shake the upgrade bug.

The good news if you’re stuck deciding between the A7 III and A7 IV is that there’s no bad answer. You should be able to take amazing photos with either camera no matter what genre you shoot – and that’s the story of almost any camera today, frankly. It’s a good time to be a photographer.

You can purchase the A7 III or A7 IV from B&H below (affiliate):