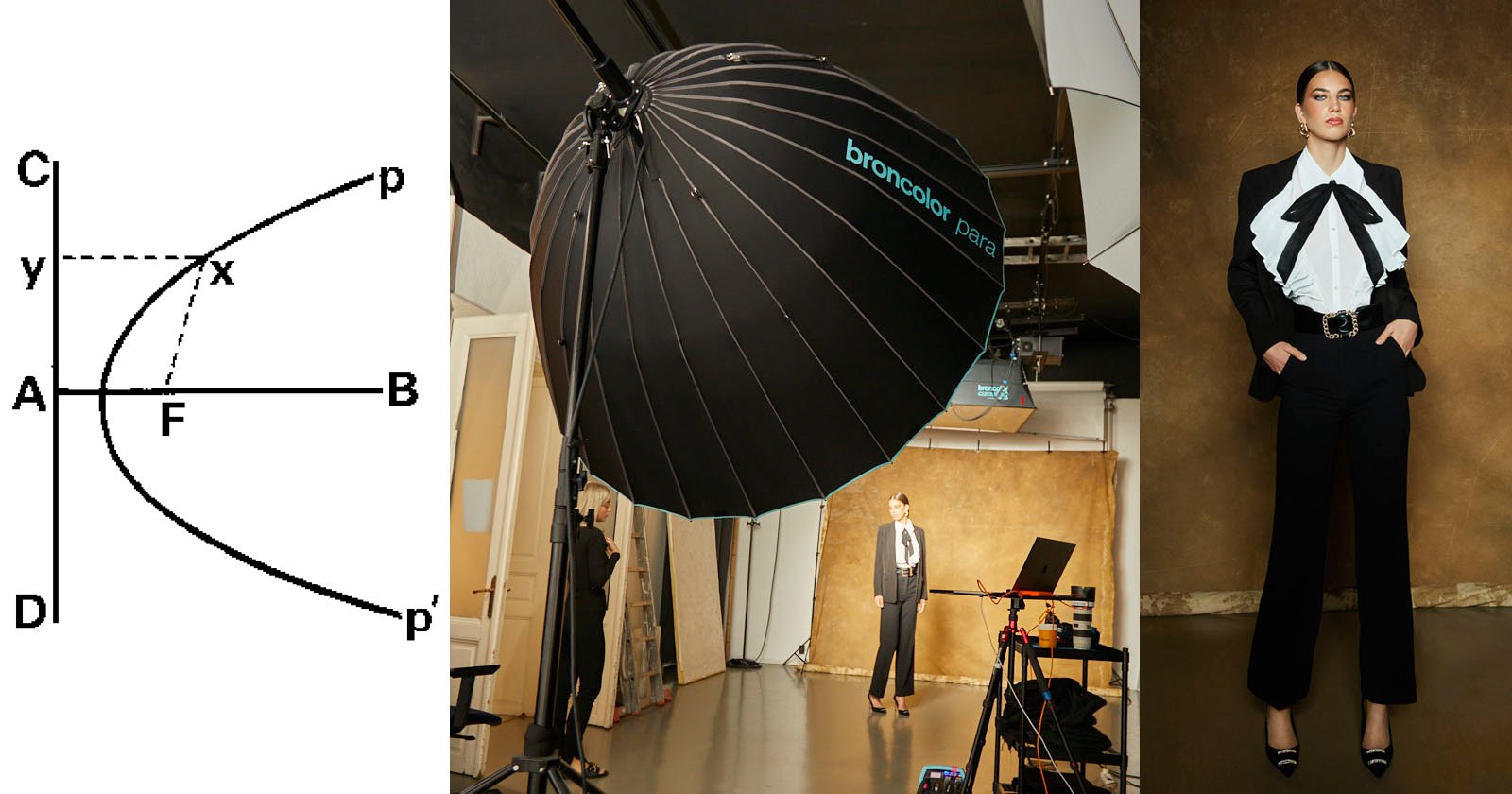 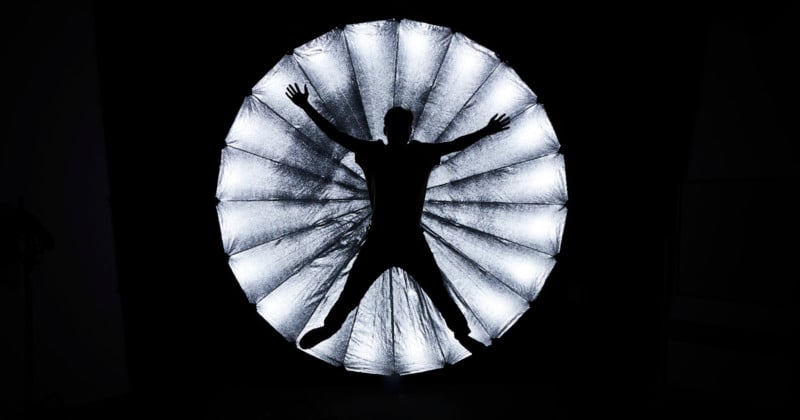 Parabolic light has become increasingly popular among fashion and portrait photographers. With so many options to choose from, a photographer may get lost or not understand the modifiers at all.

Parabolic softboxes, umbrellas, reflectors, and so more. Which ones make sense and which are just phony? In this article, we’ll explore what parabolic lighting is and why it’s awesome.

These are expensive modifiers commonly produced by Broncolor and Briese. They are renowned for their unique light quality. I took Broncolor’s Para light shapers for a spin to see what the fuss is all about and see for myself if this modifier is with you.

In short, true parabolic modifiers are incredibly versatile light shaping tools. I recommend renting them and trying them out, but make sure they are true parabolic. Read further to see what I mean by this.

What Is a Parabola?

In simple terms, a parabola is a curve at any point on which is the same distance from a focus point and a fixed line. This is a shape that is defined mathematically and a modifier can only truly be called parabolic if it follows this exact shape.

If it does, the light produced will be very crisp and, depending on where you set the focus, will either have great contrast or be very broad. Moreover, this shape is hard to replicate accurately as it required precise manufacturing and extensive R&D to get precisely what is needed. 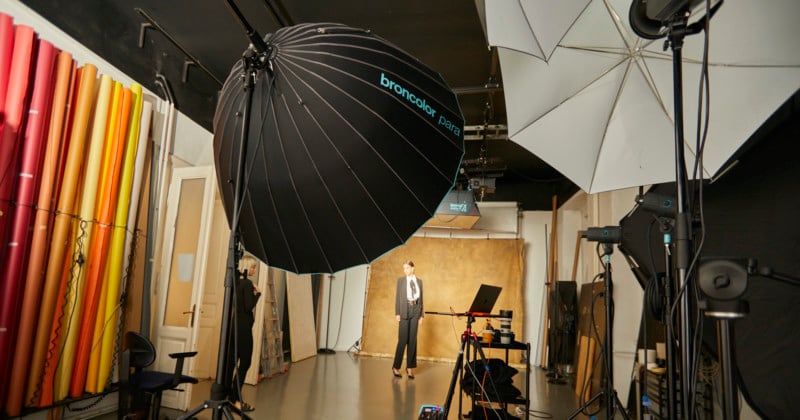 It is much easier to make a parabolic-looking modifier. Those are commonly softboxes or umbrellas that claim to do the exact same thing as more expensive truly parabolic modifiers.

Before I explain the magic of real parabolic light, I must warn and slightly upset anyone who is looking at parabolic umbrellas or softboxes. Unfortunately, those aren’t real parabolas.

A parabolic light modifier is one that follows the principle of a parabola for the whole length.

For example, let’s plot a parabola in Desmos and try to fit an image of a softbox that claims to be parabolic. 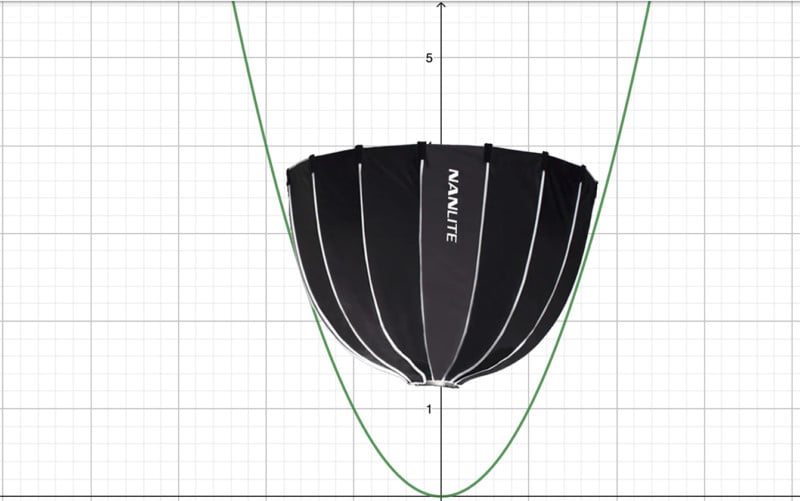 As you can see, we can’t fit the shape of this softbox to a parabola. Although they visually look similar, they will work in a completely different way and the laws of light won’t be the same as with true inverse parabolic modifiers.

I would stay away from buying parabolic-looking softboxes and umbrellas as they are a mere waste of money. Although they claim to produce deep light that is parabolic, all they do is take up valuable space and work inefficiently. Moreover, octa boxes of the same size will be more efficient and cost a lot cheaper. Just compare the amount of material needed to make a useless parabolic softbox and a simple octa.

Let’s discuss why parabolic light is a must to try or even buy. There are many advantages to it, but the biggest one if of course versatility that comes with the sliding focusing rod system that Briese and Broncolor offer. This control allows to completely change the light quality with a simple slide. 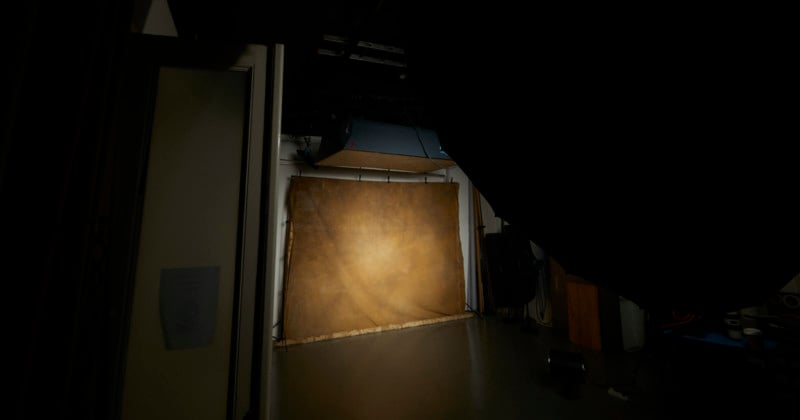 Importantly, parabolic light modifiers won’t work with flat front lights such as Profoto D or B series or Speedlite. As the whole modifier has to be illuminated at once, a flat front will become inefficient and probably won’t produce the same high-end result as a flash head with an exposed tube.

Starting at the most zoomed-in position, the huge Para 222 is able to provide a focused beam of light that has a size similar to that of a small hard reflector. However, unlike a hard reflector, the Para still being a large light source the light coming out of it is incredibly soft. Soft but with dimension.

The vision for this first image was to capture a mysterious look that would be quite harsh and dramatic. Drama naturally implies contrast and uneven illumination. The stylist chose looks that were dark which added to the mood.

Using the Para 222 zoomed in, I was able to achieve this while keeping the skin tones flattering. This is best seen through the textured canvas backdrop as well as the model’s clothes that have volume. Lastly, the belt and earring detail is brought out efficiently by using parabolic light focused completely.

While not completely focused, the beam is already wider. Here, the light has a fairly rapid falloff which is great for the image I had in mind. Although I used a grey background in a studio with black walls and ceilings, it is not visible at all due to dramatic falloff.

I imagined this image to have just that: dramatic falloff where the cheekbones are clearly visible with major shadow/highlight contrast. Playing around with the positions on the Para, I noticed that this is the best focus position for the result in mind.

In situations where even background illumination is required, a half-zoomed-out para is a great choice. In this image, my goal was to have an even image, while still retaining much of the contrast in the clothes. At the same time, the light had to be soft.

Due to the large size of the Para, the softness was taken care of, while the contrast was provided by the rapid falloff characteristic of all true parabolic modifiers. As the light was so even, I wanted to add some fuzziness to introduce drama and really give the image even more dimension.

Despite me putting gels in front of the lens to create flare, there is still clearly visible detail due to the very crisp light that is produced by the Para at all positions.

This position is also unique to parabolic modifiers as it lights up only the edges of the modifier creating a soft three-dimensional light with contrast. This is best used when you want to photograph shiny surfaces or metal.

In this image, the goal was to create a light that would accentuate the models’ garments. Those being largely reflective metal or plain black demanded that I get light that would reflect from the metal surfaces from a wide family of angles.

As said previously, a fully zoomed-out parabolic modifier acts like a series of hard reflectors, because the light comes from so many directions, I don’t have to worry about camera placement to capture the reflections. You can clearly notice how every detail is reflecting in its own way. This same effect would be a lot more challenging with modifiers such as hard reflectors or octa boxes.

I love light, and the Para is my newly found love that I am ready to propose to. What it offers is incredible versatility and efficiency in delivering a wide range of results. The joy of using a Para is that you can play around with the light in order to get the precise result.

These modifiers offer room to play and really get the light you’re looking for. There isn’t really a wrong way to use a Para as long as it’s producing what you want. Being able to change the light completely with a simple slide is already enough to seriously consider renting a Para. The only drawback my newly found love has is of course the price.

Three major manufacturers of true parabolic modifiers, Briese, Broncolor, Parabolix, all price them very highly. I know for a fact that I will be renting Paras a lot, but I will probably not buy one until I find myself renting it for every single job. But by all means, I strongly suggest organizing a test shoot and renting out a Para from your local rental house. They’re some of the best modifiers I’ve gotten my hands on!

About the author: Illya Ovchar is a commercial and editorial fashion photographer based in Budapest. The opinions expressed in this article are solely those of the author. You can find more of Ovchar’s work on his website and Instagram.