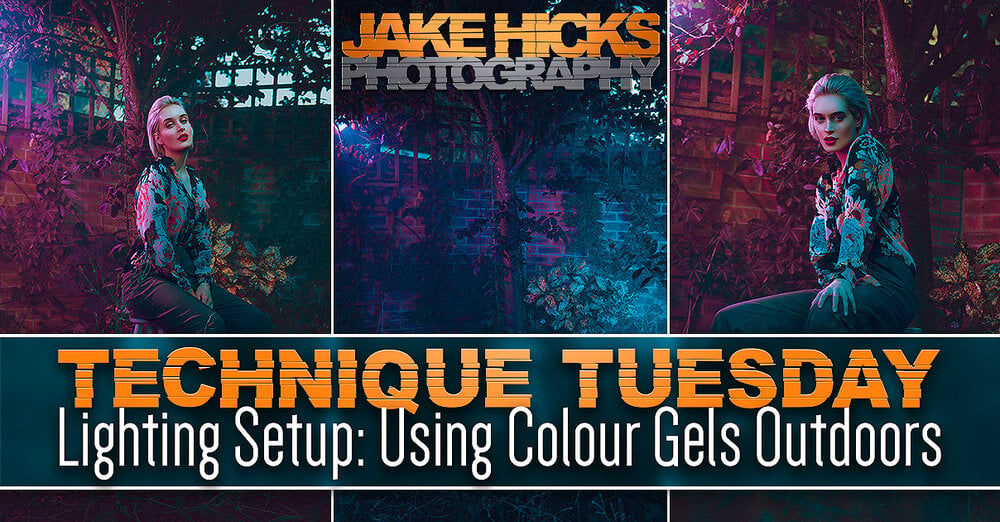 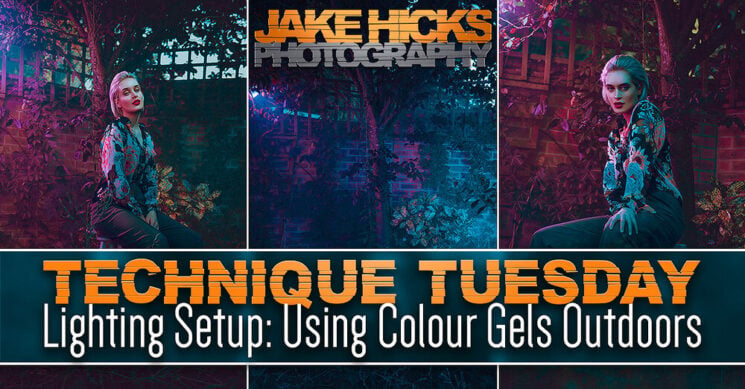 You don’t often see photographers using gels outdoors in natural light, but why?

I think one of the core reasons you don’t see too many natural light gel shots, is that you need a lot of power and control from your lights to make gels visible in daylight. Whenever we’re outside during the daytime, sunlight has a tendency to creep in everywhere. Even when we’re standing in heavy shadow, there’s still a lot of light on us as the sun bounces around almost endlessly and sneaks into even the most shadowy areas. This is an issue for gels as bright, strong daylight will overpower and ruin a gel shot instantly, making the desired shot significantly harder to achieve over simply setting it up indoors.

Why is sunlight an issue with gels?

So if we really want to use gels outdoors, are there any elements we should be aware of? One of the key tenants I teach about gels, is to always try and apply a gel to a shadow. The reason for this is to ensure rich, clean colours and you can only really achieve this if there’s not already light falling where you want to add them. If you’re going to use gels outdoors, try and only do so in the shadows.

The best time and place to use gels outdoors

The reason I’m making this point about gels, shadows and daylight, is so that I can prepare you for the best scenario to use gels in your shots outdoors. Yes you can use gels outdoors in natural light, but for best results, try and use them in shadowy areas or better yet, after the sun has almost gone down. 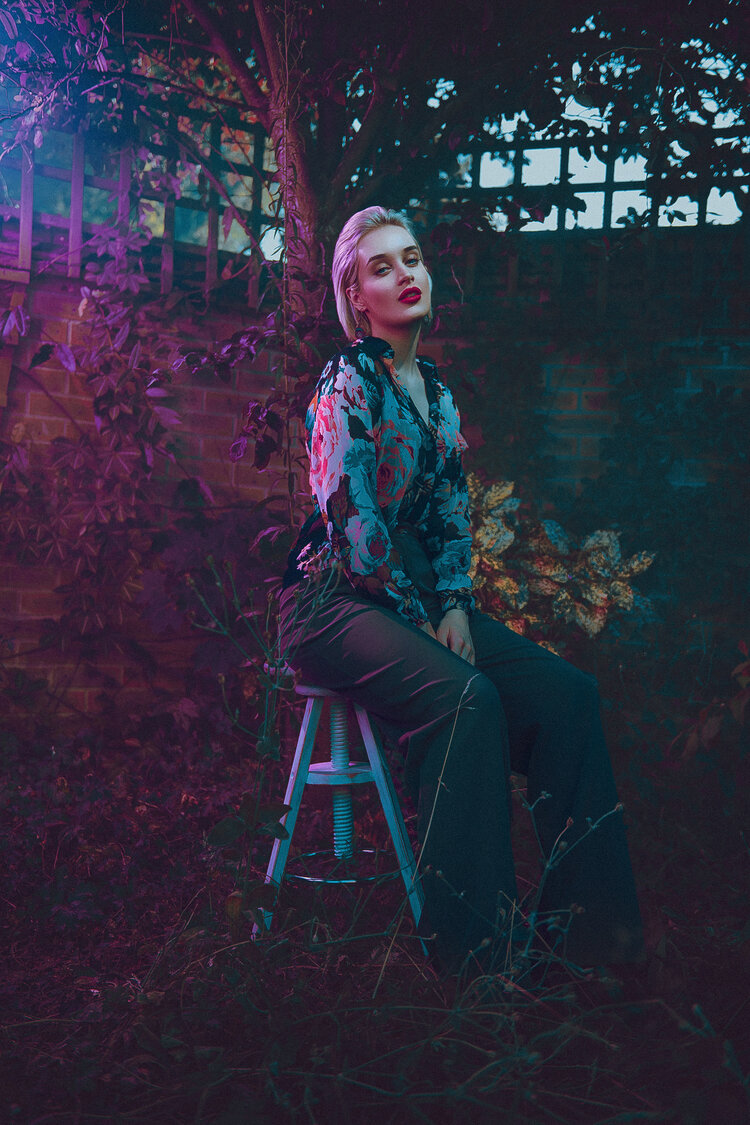 Using gels outside can be tricky, but the key to a successful gel shot is to balance the ambient with flash so they compliment one another.

Now that I’ve primed you with a little knowledge about gels and daylight, let me now explain the lighting setup I used here. Hopefully some of the decisions I made about when and where to do this shoot will now make a little more sense to you as I explain it.

On the day of the shoot, we’d actually already been shooting all day prior to this setup, but by the time it got to about 4 or 5 o’clock, I thought it would be a good time to try and get some shots with the gels outdoors. The sun had dropped low in the sky and there was no direct sunlight anywhere in the area where I wanted to shoot. On top of that, I also decided to shoot under some trees and this further reduced the amount ambient light in shot.

Whenever you start to setup a multi-light shot, what light do you set up first? For me, and I advise this on both indoor and outdoor shoots, I always recommend you start with the light you can’t control. In this setup, the one light I can’t control is the sun, consequently I need to adjust my camera around that.

For this scene, I wanted it as dark as possible where I was going to be shinning my gels, but I also wanted the glow of sunlight to come through at the top of the frame to silhouette the trees, leaves and trellis.

Why not just shoot it at night?

One thing you may be thinking is, “Wouldn’t this just be easier to do at night?”. Yes, shooting this at night would mean you wouldn’t have to worry about daylight ruining your gels, but try to imagine the shots I’ve taken here with zero daylight. The top of the frame would be extremely dark and we’d loose all of the beautiful elements where daylight is still creeping through the leaves. This shot at night would be vastly different and I personally feel it would lose a lot of impact. 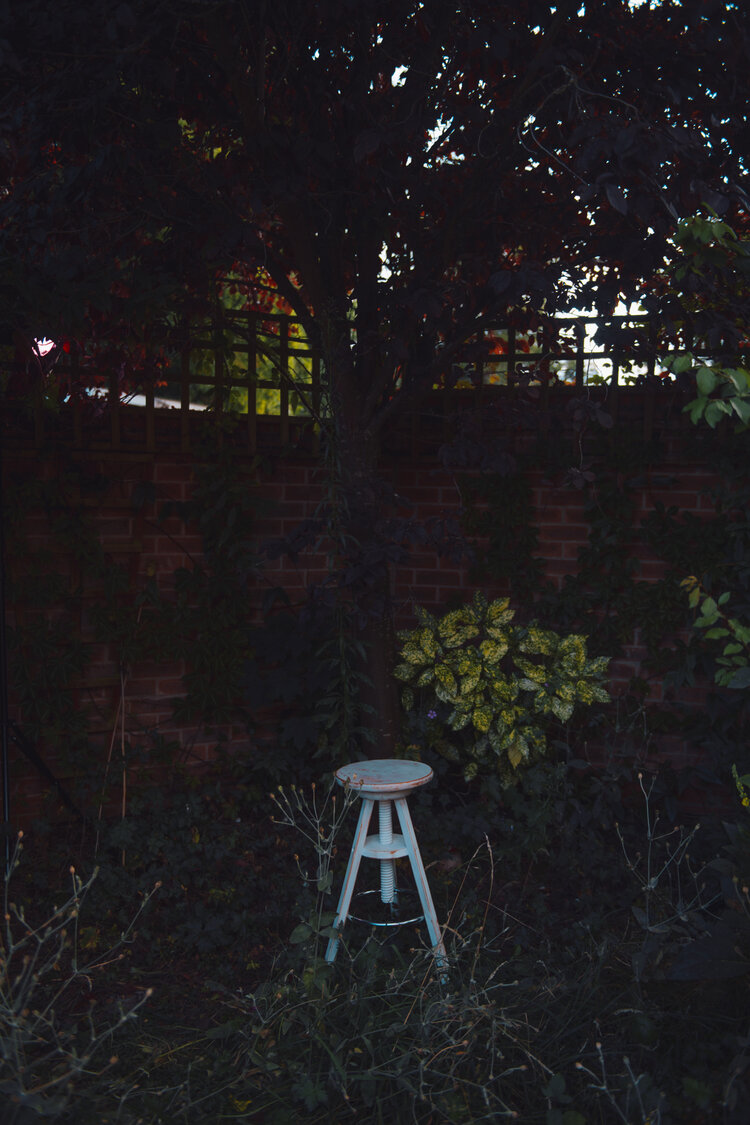 Here’s my ‘baseline’ shot as I adjust my camera around the daylight. I have limited the amount of light falling in the foreground so that my gel colours will be strong, but the daylight is still easily poking through the trees and leaves.

The fast shutter speed allowed me to limit a huge amount of daylight out of the areas I didn’t want it and this allows me to add gels to those shadows later on. I didn’t want to eliminate all of the daylight though, and I still had a little fill in the foreground as well as enough daylight poking though the trees to provide some nice silhouettes and interest in the top of frame too.

A note on HSS

I just want to quickly mention HSS (High Speed Sync) as I know someone will ask. If you’re not aware, HSS allows you to shoot at very fast shutter speeds and still sync with your flash. This is a feature on many modern flash units and it’s great if you like shooting with strobe outside in the daylight. For this shot, I am not using HSS as the 1/250th shutter speed is still slow enough that I am able to sync to my camera without it. The reason I mention it, is so that you don’t think a shot like this is only possible with HSS. Most strobes or even speedlights, new and old, will be able to achieve this setup.

This may seem obvious, but for gels to really work and stand out in a shot like this, they need to be shone onto a surface (the bigger the better) for the colour to show up. In this shot, I’m going to be using a brick wall behind my subject to shine my gels onto, this will then make the subject stand out against it. Next I’ll shine an apposing colour from the other side (camera-right) to shine onto my subject which will then further increase the separation between subject and background with colour contrast. Next, I’ll add a hair light of the same gel colour on camera-left and then I’ll finish it off by adding a white key-light to the subjects face.

Take a look at the lighting setup below… 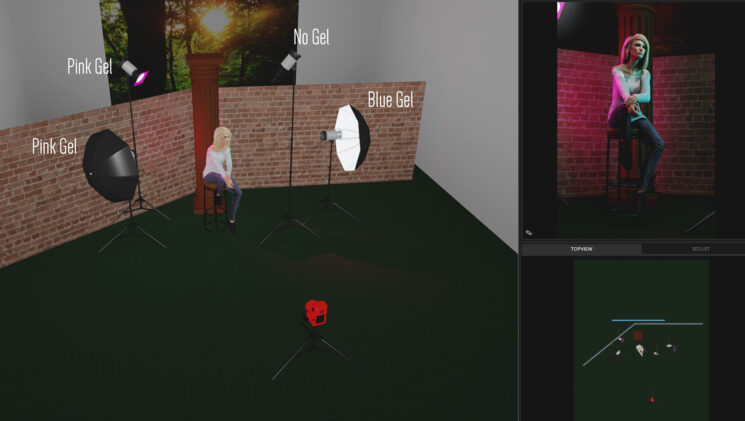 Here’s the lighting setup (just imagine this is outside).

As I mentioned above, I’m casting that pink gel across the back of the shot so that the subject stands out against it. I’m then further enhancing that pink gel in shot by adding a gridded dish up high and to camera left as a hair light. This just helps to add more shape to the subject, whilst still keeping it in line with the colours on that side of the shot.

Here’s the setup prior to the model arriving:

Remember; there is two pink lights to camera-left and one blue light to camera right.

Lastly, be sure to pay close attention to how much ambient light (daylight) we have in the foreground as fill.

Note: There is also supplemental atmosphere here and I will discuss that further in a bit. 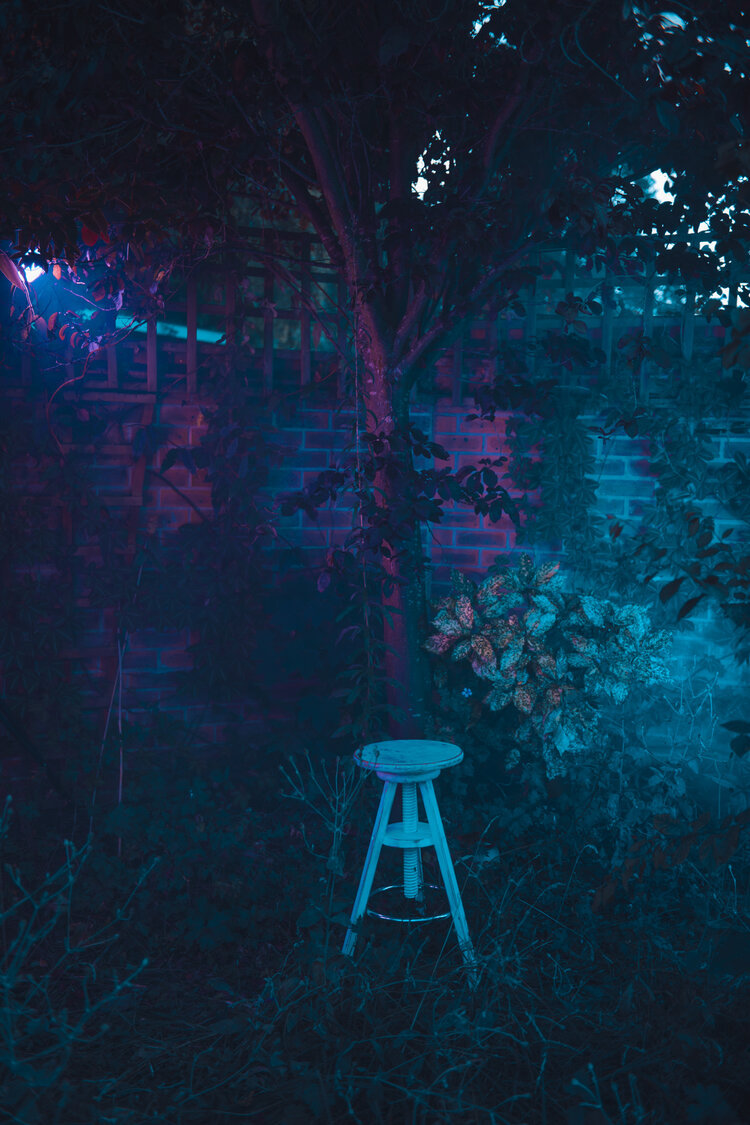 This setup has a lot of flexibility in terms of what modifiers you can use. It’s a four light setup and in basic terms, it’s essentially just two soft lights and two hard lights. Here’s the modifiers I was using, but you can mix and match with other hard and soft modifies as you see fit.

I’m using a couple of large umbrellas here, but you could just as easily use two big softboxes if that’s what you have. The important thing to remember here, is that you want modifiers that will throw the coloured light over a wide area.

This is one of our ‘hard-lights’ and I’m using this grid because I want to focus the light into a small area, namely the edge and top of the models head and hair. Again, you can use a variety of things here, I’m using a dish and grid, but you could also use a barn-doors or snoot to do the same thing.

The only non-gelled light in the shot is our key-light. For this setup I’ve placed it up nice and high and angled it down so as to only shine light onto her and not the background. To make this work, you really need a directional hard-light again. I used one of my favourite modifiers, the ‘Optical Snoot’, but you could use another grid or snoot to similar effect. The main reason I used my optical snoot here though, is simply because it gives me so much control. This modifier not only gives me a very small pool of light, but it’s also a very clean pool of light with a consistent exposure from edge to edge. If this modifier is new to you, take a look at my review of it here to learn why it’s one of my favourite modifiers I own: Optical Snoot Review 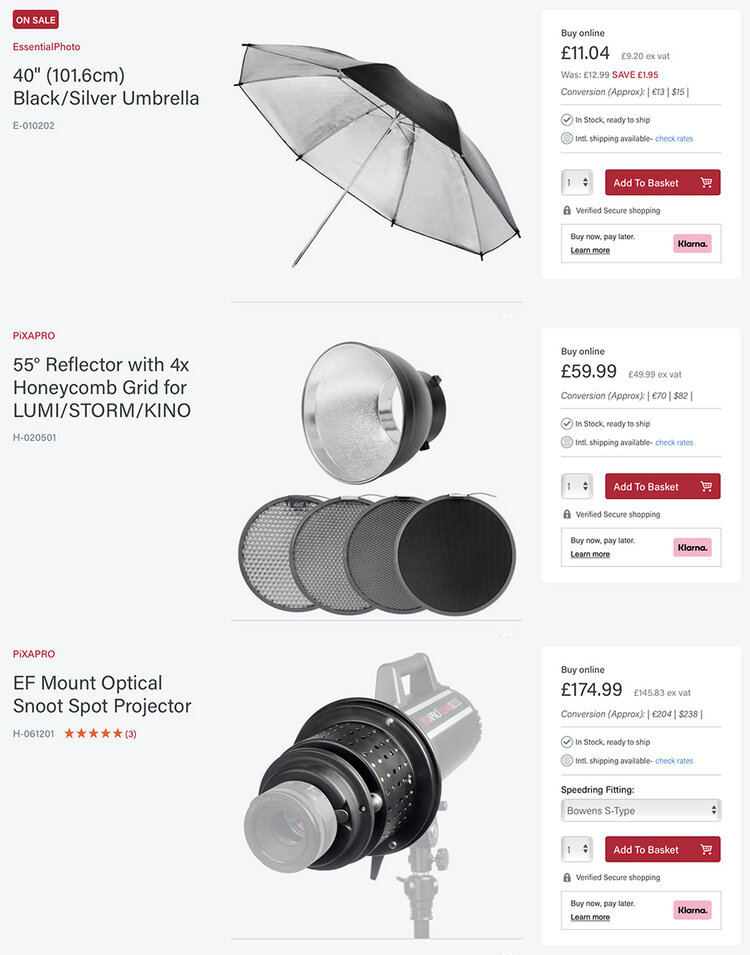 The final touch to this setup is going to be the addition of artificial atmosphere and to do so I’ll be using a haze machine. When adding elements like smoke or haze, subtly is key as you don’t want to overpower the subject, but you just want to add a little extra visual depth to the scene. Take a look below at the two side-by-side shots. The one on the left has no haze in shot and the one on the right has the haze present. Subtle, but you definitely notice it when it’s not there. 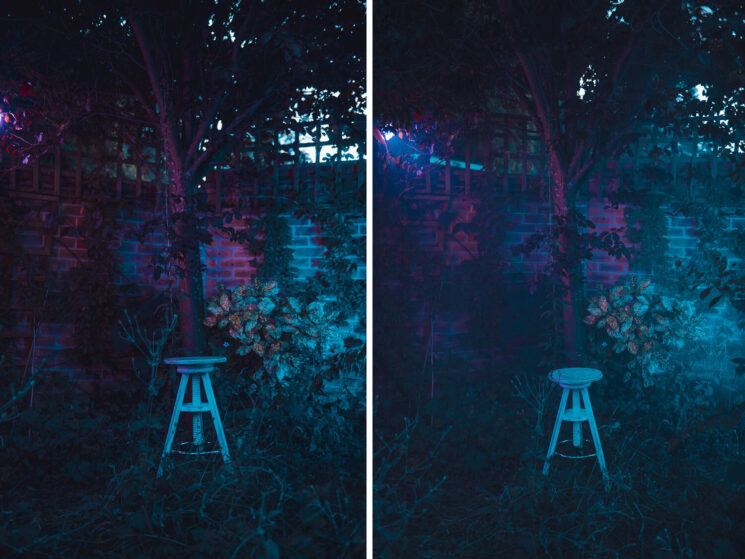 As you can see above, you don’t need a lot of haze to get the desired effect, but adding haze like this also has an additional benefit and that’s a little extra detail to the shadows. Look at how much data we have in our shadows now that the haze diffuses the light that passes through it. In contrasty scenes like this, that little bit of haze can make all the difference.

Once everything is finally in place and roughly adjusted, it’s time to bring the model in and fine tune everything. Here’s how the final shots turned out.

Click on any of the shots below to see them full-screen.

This is not a difficult setup to shoot, especially if you remember a few key points whilst you’re getting everything into position.

As always, thanks for checking out this article and spending a little bit of your day with me here. I hope you found it useful and if you left with a little more knowledge than when you arrived, it’s been worth it.

If you have any questions or comments, or if something doesn’t make sense, by all means, fire away in the comments below and I’ll do my best to answer what I can. Thanks again and I’ll see you in the next one.

Don’t forget to sign up for my newsletter to be sent all of these photo tips and techniques articles every month in case you miss one.

Jake Hicks is an editorial and fashion photographer who specializes in keeping the skill in the camera, not just on the screen. For more of his work and tutorials, check out his website. Don’t forget to like his Facebook page and follow him on Instagram, too. You can also sign up for the Jake Hicks Photography newsletter to receive Jake’s free Top Ten Studio Lighting Tips and Techniques PDF and be sure to download his free 50-page studio lighting book. This article was also published here and shared with permission.

Photos of Last Northern White Rhino on Earth Wins Travel Photo Contest
Using the AstrHori 18mm f/8 Low-Cost Shift Lens
What is Butterfly Lighting and How to Use It for Portrait Photos
Film Photography: A Complete Guide
RODE NT-USB+ Studio Microphone Review: Good Gets Even Better