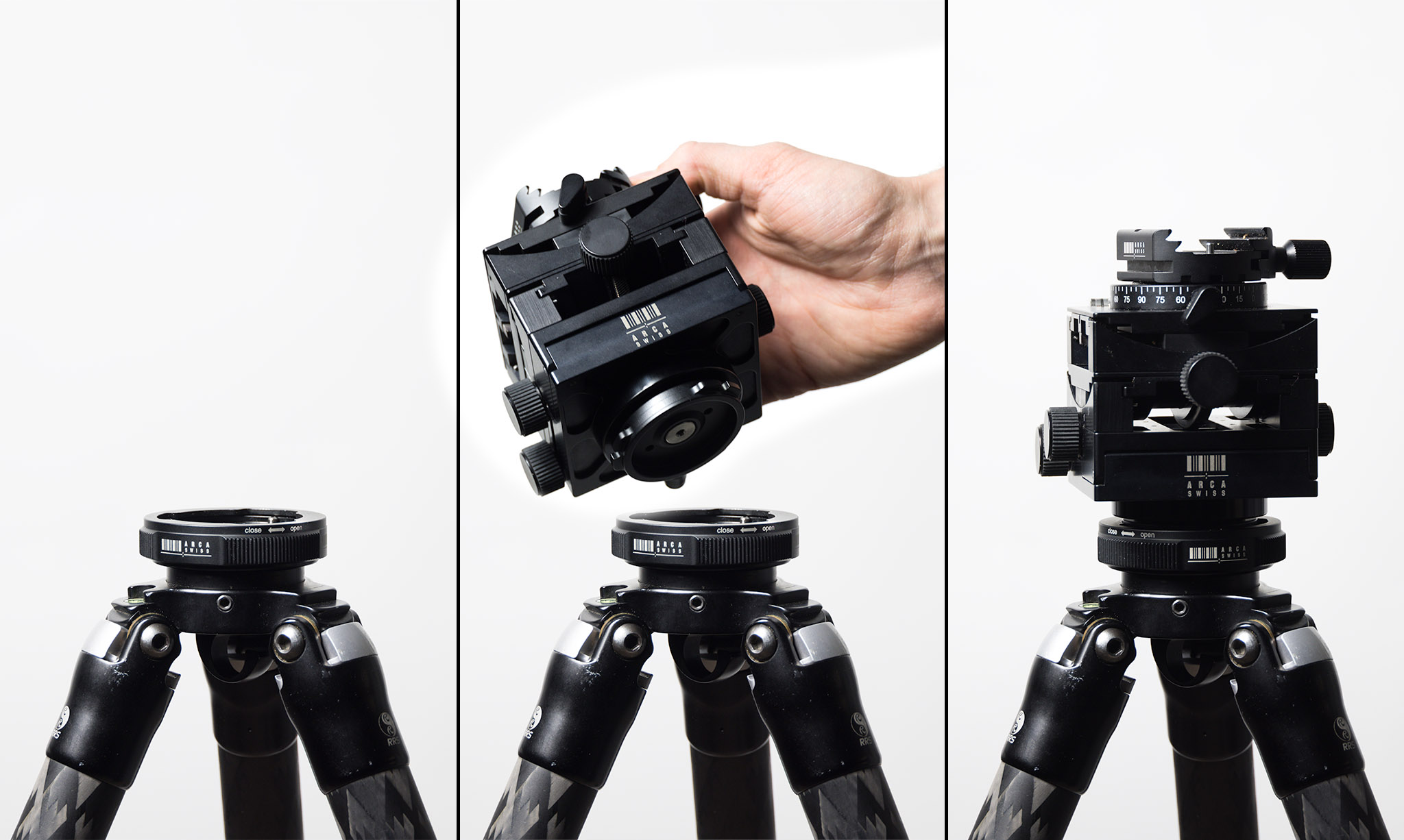 Arca Swiss’s “Quick Link Set” is a duo of lightweight plates that go between your tripod and your tripod head, letting you attach and detach the head quickly. I’ve been using the Quick Link Set recently and wanted to cover my impressions in today’s review.

What Is the Quick Link Set? 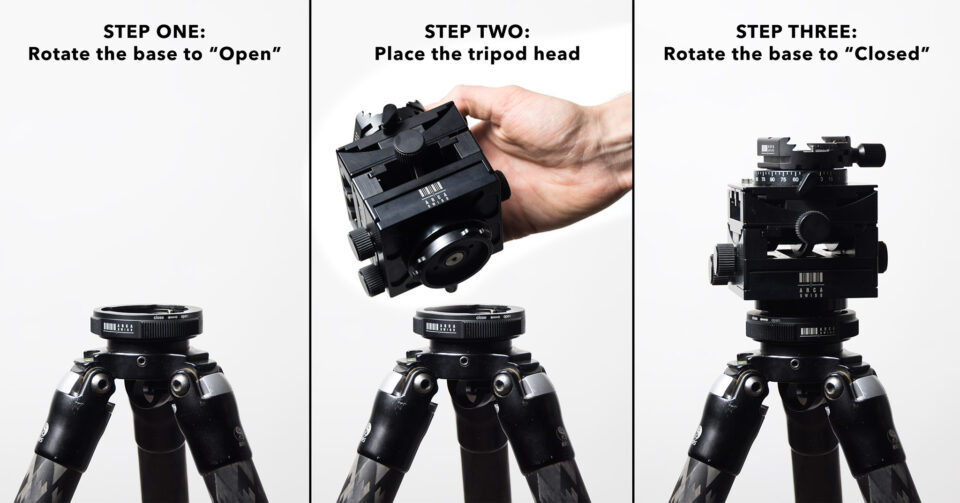 Who Is the Quick Link Set for?

Plenty of photographers always use just one tripod with one head, and they rarely need to separate the two. If that’s your situation, there’s no reason to get the Quick Link Set, especially considering the price. But there are a few situations where the Quick Link Set (or something similar from other manufactures) is worthwhile.

The first is simply if you find yourself swapping tripod heads frequently. Maybe you’re a dual stills/video shooter with one tripod but two heads: a standard ballhead for photos, and a pan-tilt head for videos. Unscrewing them each time can be a slow process and may cause you to miss a shot. With a Quick Link disk on each tripod head and a receiver base on the tripod, you can swap between the heads in a matter of seconds.

Another reason to use the Quick Link is if you want to pack your tripod head away easily for travel or hiking. Personally, when I go hiking, I find that a heavy tripod can drag my backpack in an uncomfortable way. Maybe the tripod hangs off the side of the backpack, twisting my spine in that direction, or maybe it hangs off the back, making the tripod feel twice as heavy. Either way, the heavier the tripod head, the bigger the problem – and I’m currently shooting with a heavy geared tripod head that can be uncomfortable to carry. With the Quick Link Set, I’ve been detaching the head and storing it inside my backpack in a better spot to carry. Other photographers shooting with big geared heads, pan-tilt heads, or larger ballheads like the RRS BH-55 may be in a similar boat.

Finally, you may want to use the Quick Link Set if your tripod head doesn’t do well in the elements, such as dusty and sandy conditions. This is especially true of a lot of geared heads, which often have their gear mechanism exposed to the outside world. It’s a pain to unscrew the tripod head each time you’re done shooting, but I know of some geared head shooters who do exactly that in order to avoid damaging their expensive equipment.

The Quick Link Set has excellent build quality. The open/close mechanism is smooth and intuitive after using it just a few times. Also, the secondary hex-key screw (pictured below) means that the plates won’t go anywhere once they’re attached – a nice benefit over some tripod heads that can loosen or unscrew themselves if they’re not locked tight. 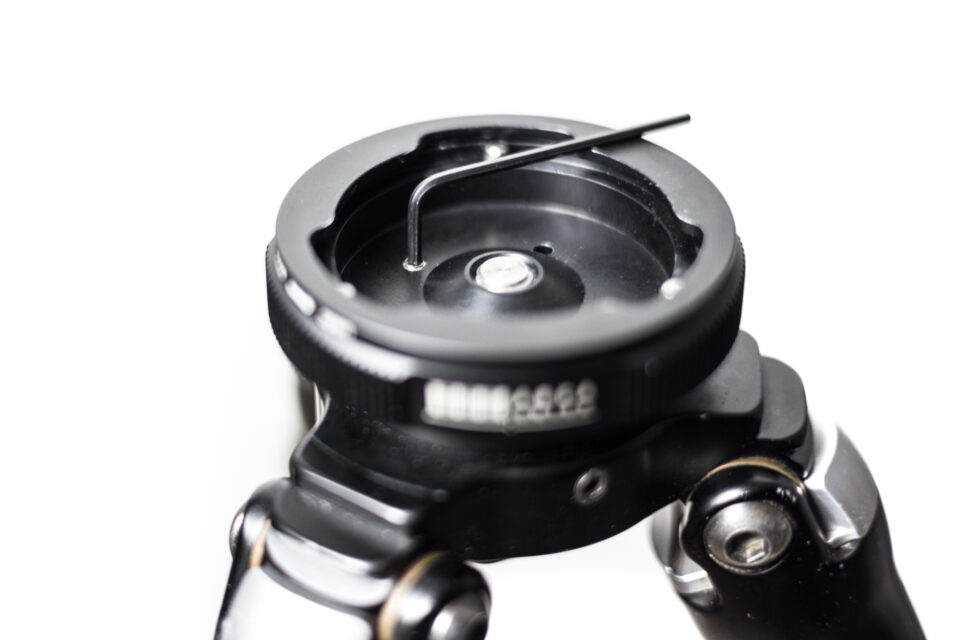 Another important factor to consider is weight. While the Quick Link Set is reasonably light, it’s still a bit heavier than you may want. The basic set (which includes one disk for your tripod head and one receiver base for your tripod) totals 139 g / 4.9 ounces. In other words, it’s a bit lighter than two Nikon EN-EL15 batteries. Whether that’s an issue or not depends on your own situation. If you’re going on a difficult backpacking trip and rationing ounces, I’d recommend against taking the Quick Link Set along. Otherwise, it’s probably not an issue.

A concern with tripod attachments like this, at least in theory, is stability. Rather than one pivot point between the tripod and the head, there are now three: between the tripod/base, base/disk, and disk/tripod head.

To test the Quick Link Set’s stability, I set up the largest and most unwieldy camera I have access to, an 11×14 camera that measures roughly one meter (three feet) long when extended and weighs about 9 kg (20 pounds) all told. As you can imagine, a camera like that is prone to wobble even on a stable tripod and head, and it’s very sensitive to instability. I put a laser pointer on top of the camera, pressed down hard on the back standard, and let go. I then timed how long the laser pointer’s wobble lasted on a wall, repeating the test for a total of 10 measurements without the Quick Link and then 10 tests with it.

Going without the plates, the wobble lasted for an average of 4.87 seconds. Going with the plates, the wobble actually averaged a hair shorter at 4.81 seconds. However, these values are so similar that they’re within my setup’s margin of error. Overall, to the extent that I’m able to test it, I found no meaningful loss of stability when using the Quick Link Set compared to going without it. Considering that my camera setup for this test was sensitive to very small differences in stability, photographers with a standard DSLR or mirrorless camera should find it even less of a concern.

The caveat is that you need to tighten down the Quick Link Set all the way, including using the secondary hex-key screws. If you attach either plate loosely – or you don’t slide the receiver base to “closed” with sufficient force – you’re at risk of adding some wobble.

I have not tested any alternatives to the Arca Swiss version of the Quick Link Set, but I’ll briefly cover the ones that exist on the market today. First, Leofoto sells a similar-looking knockoff version called the QS-70 that is about half the price of the Arca Swiss set, plus smaller variations called the QS-60, QS-50, and QS-45. At the time of publishing this review, they’re only sold as a special order at B&H but are in stock at Amazon. Since I haven’t tested them, I make no claim about their quality relative to Arca Swiss. I have used a couple Leofoto products in the past without issue, but there’s also no denying that they “take strong inspiration” from Arca Swiss (to put it nicely) on some products, including this one. 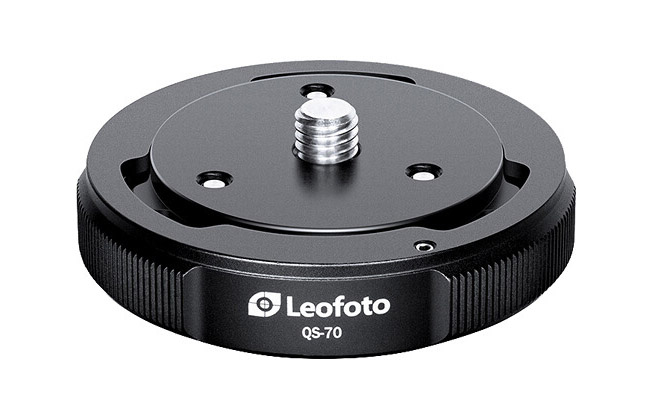 The other option is a bit different. Rather than a circular plate and clamp, you could just attach a standard tripod plate to the bottom of your tripod head, then a standard (or panning) clamp to the top of your tripod. It looks like this:

Again, I haven’t tested this for stability and am just letting you know what else exists. My initial reaction is that the setup above doesn’t look as stable as the circular Arca Swiss or Leofoto products whose clamps hug the entire disk. But if you already have the necessary supplies to put together the setup above (i.e. an extra tripod plate and clamp), or you’re on a budget and want SmallRig’s inexpensive version, it may be the way to go.

Is the Quick Link Set a worthwhile accessory, or is it just an expensive product in search of a need? It all depends on how you tend to use your tripod. If you’d find it useful to swap out your tripod head quickly, it’s worth getting (or at least worth looking at the knockoff Leofoto if the Arca Swiss is over your budget). But if you’re shaking your head at that, don’t buy it.

I ended up purchasing a set and have found it helpful for my landscape photography. When I’m hiking, I can remove and stow my heavy geared head in a comfortable spot inside my backpack rather than hanging it off the side of the bag. It also lets me avoid exposing the geared head to the elements – not the head’s strong suit, especially in sandy conditions. But my situation is pretty specific and matches the Quick Link Set’s strengths very well.

Other than that, it’s no surprise that this type of tripod accessory isn’t a common sight. The Quick Link Set is fairly expensive and adds weight without solving any commonly occurring problems in photography. Sure, it’s very stable and well-built, but is it necessary? As I see it, the Quick Link Set is one of those “if you need it, you know” sorts of products. If it fits your situation, there’s little to complain about aside from price. But for many photographers, it just doesn’t offer features that are especially relevant.

The Sword-Billed Hummingbird: A Knight of the Andes
Can You Find the X? Photographer’s Gigapixel Images Contain Hidden Code
Nikon Discontinues the SB-500, Suspends Orders for the SB-5000
Lightroom Coffee Break: Give Folders Color Labels in Lightroom Classic CC
What is Butterfly Lighting and How to Use It for Portrait Photos