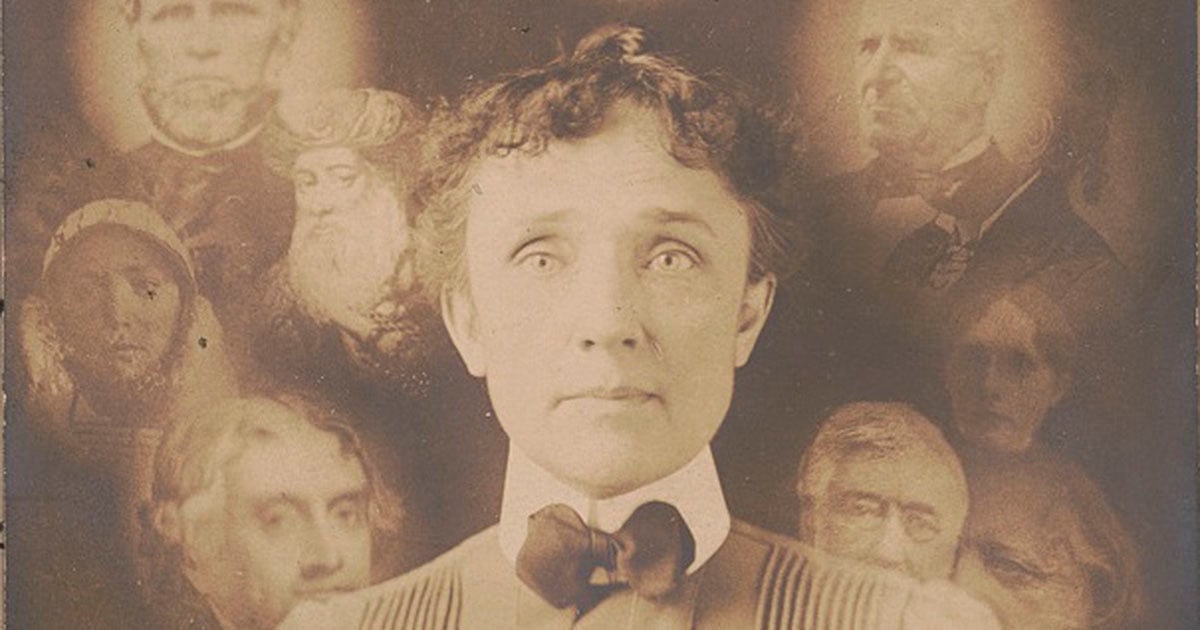 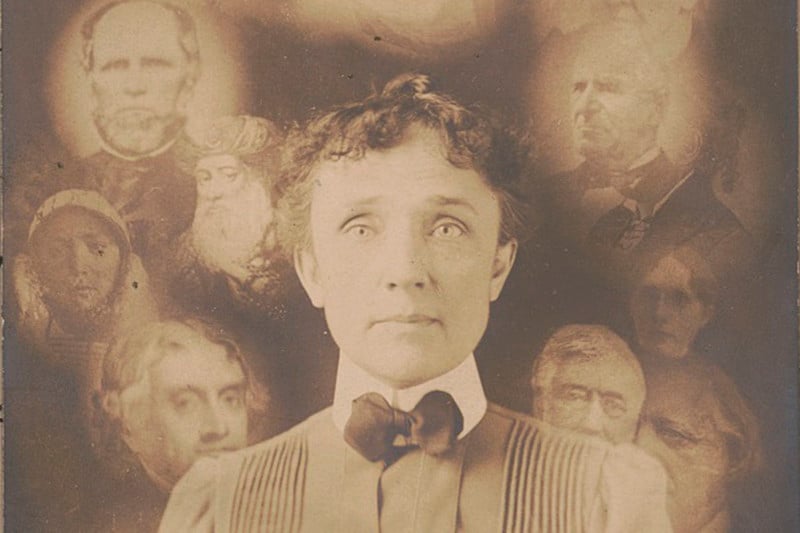 Spirit photography was an important development within bereavement rituals of the early 1860s.

Spirit photographs are portraits that visually reunite the bereaved with the wispy reappearance of their loved ones. Some people perceived these photographs as evidence in support of core “spiritualist” beliefs. Spiritualists held that the soul persists after death and the potential exists for continued bonds and communication between the dead and the living.

Mediums, largely women, worked alongside spirit photographers to enable the “spiritual” reappearance of the deceased. My research shows women to have been integral participants in this development: I name a woman as the likely inventor of spirit photography.

The emergence of spirit photography in Boston was an exciting and highly publicized moment that continues to captivate people today.

Contemporary viewers sometimes see spirit photographs as amusing historical artifacts. Some Victorian viewers were also accustomed to the use of translucence in photographs produced for entertainment or popular storytelling. For example, some people collected and shared images generated by cameras that produced differing views of the same scene to produce the illusion of three dimensionality. Nonetheless, for the bereaved who commissioned spirit photographs, these objects had worth as personal mementoes.

The afterlife envisioned by spiritualism appealed to women who rejected the idea that their unbaptized children could be damned to hell. All who had died young — soldiers, children and the many women who did not survive childbirth — were cared for in this realm, and emotional bonds with them were sustained.

Beheld by sympathetic eyes, spirit photographs were evidence of undying love. Nonetheless, even within some spiritualist communities, they attracted a great deal of criticism.

William H. Mumler, credited in his day as the originator of spirit photography, was charged with “obtaining money by pretended ‘spirit’ photographs.” After a lengthy and public pre-trial, Mumler was acquitted of all charges and continued his work.

During Mumler’s pre-trial, press reported on “Mrs. Stuart” as the woman who ran the studios where Mumler’s first spirit photographs originated. Stuart never appeared in court. Unlike many spirit photographers that followed, the methods of Mumler and his associate, Stuart, were never proven.

My research has documented Stuart as one of Boston’s most prolific photographers, the first photographer to be clearly listed as a woman in local directories. More importantly, my findings suggest that the name “Mrs. Stuart” was likely an alias.

Many important accounts of spirit photography have indicated the need to further investigate the role of Mrs. Stuart and Hannah Mumler, William’s wife.

Hannah Frances Green was born in Marblehead, Mass., in 1832, and married Thomas Miller Turner 20 years later, bearing two children with him. Divorce records state that Green and the children were deserted by 1859.

The same year Green was adjusting to life as a single mother of two, a Mrs. A. M. Stuart appeared in Boston directories as an artist in hair at 191 Washington St., and also as a “hair work manufacturer” at the same address. Hair work manufacturing was the Victorian art of weaving hair into art, jewellery or ornaments for commemorative purposes. The following year, she lists again as a hair artist.

In 1861, Mrs. H.F. Stuart lists as a hair jewellery manufacturer at 221 Washington St. By 1862, H.F. Stuart expanded to establish her professional photography studios at 258 Washington St., the address associated with the first spirit photograph. Her continued production of hair jewellery is verifiable by the stamp on the back of her many commissioned carte-de-visite portraits.

Helen F. Stuart’s business listings place her within the years 1859-67, but I could not locate any census records for her. There are no verifiable birth, death or marriage records associated with this name.

Early in this time frame, Hannah Green(e) listed her services as clairvoyant physician. (Some women in spiritualist movements promoted their gifts of “clairvoyance” as allowing them to diagnose problems and facilitate healing by channelling a spirit.)

As a producer of hair jewellery, photographer and clairvoyant physician well into her 80s, Hannah Green (Stuart) was uniquely positioned to envision the innovation within bereavement rituals that spirit photography represents. Women’s expertise has, after all, been long recognized as integral to commemorative practices surrounding death in the Victorian period and earlier.

I have thus far located four spirit photographs that are positively attributed to Helen F. Stuart, a woman who exists in business listings only in the approximate time period that Hannah Green(e) is missing from public census records.

In an 1869 court statement following his investigation and indictment, Mumler claimed he was alone when he produced his first spirit photograph. He said he relied solely on what he had surmised by watching an unnamed male friend, yet there are no other references to this friend.

In 1861, Mumler, the engraver, and Stuart, the jewellery manufacturer, are both listed at 221 Washington St., in Boston.

The “male friend” was likely concocted to conceal that Mumler sought instruction from a woman (Stuart). Perhaps he avoided expressly admitting that Hannah Green had been there, as she was still married to Turner. Or perhaps he wished to protect her and the children from scrutiny as the four relocated to New York. As official records show, Mumler and Green married in 1864, months after her divorce from Turner was finalized.

Witnesses at Mumler’s pre-trial testified that a woman known as Mrs. Mumler prepped clients for spiritual encounter and guided them towards a positive identification of the ghostly apparitions.

Later, in his published memoirs, Mumler notes that on the occasion of his “first development,” a woman was present — someone he praises for her “wonderful magnetic powers,” that he believed were connected to apparitions. Though Mumler’s wife was spared the courtroom and seldom plays an important role in accounts — Mumler did find space to credit her.

Hannah Green’s capacity for survival as a professional with extraordinary skills at self-promotion are verifiable long after she separated from William Mumler, her second husband, in the late 1870s — and after his death in 1884.

Mediumship as it was understood in the Victorian era implied a kind of passivity, which was why women were believed to be suited to this role. By contrast, in the latter half of the 19th century, photography became increasingly associated with men’s work and scientific method. It would have been difficult for a woman to present herself as the inventor of spirit photography. I believe Hannah Green involved a man with complementary skills in an effort to move her vision and business forward.

In considering Green’s contribution to spirit photography, we are led to revisit how women’s roles have been overlooked at a significant moment in photographic history — and to recover an understanding of spirit photography as an innovation within personal bereavement rituals.

Why believe this counter-narrative? There is more evidence that points to this scenario than not.

About the author: Felicity T. C. Hamer is a PhD Candidate and Public Scholar in Communication Studies at Concordia University. The opinions expressed in this article are solely those of the author. This article was originally published at The Conversation and is being republished under a Creative Commons license.

Photography News: Canon Lens Rumors, Tycho Crater Up Close
ARRI and Rotolight Settle Photo and Video Lighting Patent Lawsuit
💡 Turn On Headlights In Photoshop!
UV Filter: Should You Use One on Your Camera Lens?
Rode’s NTH-100 headphones are now a headset with the new NTH-Mic microphone