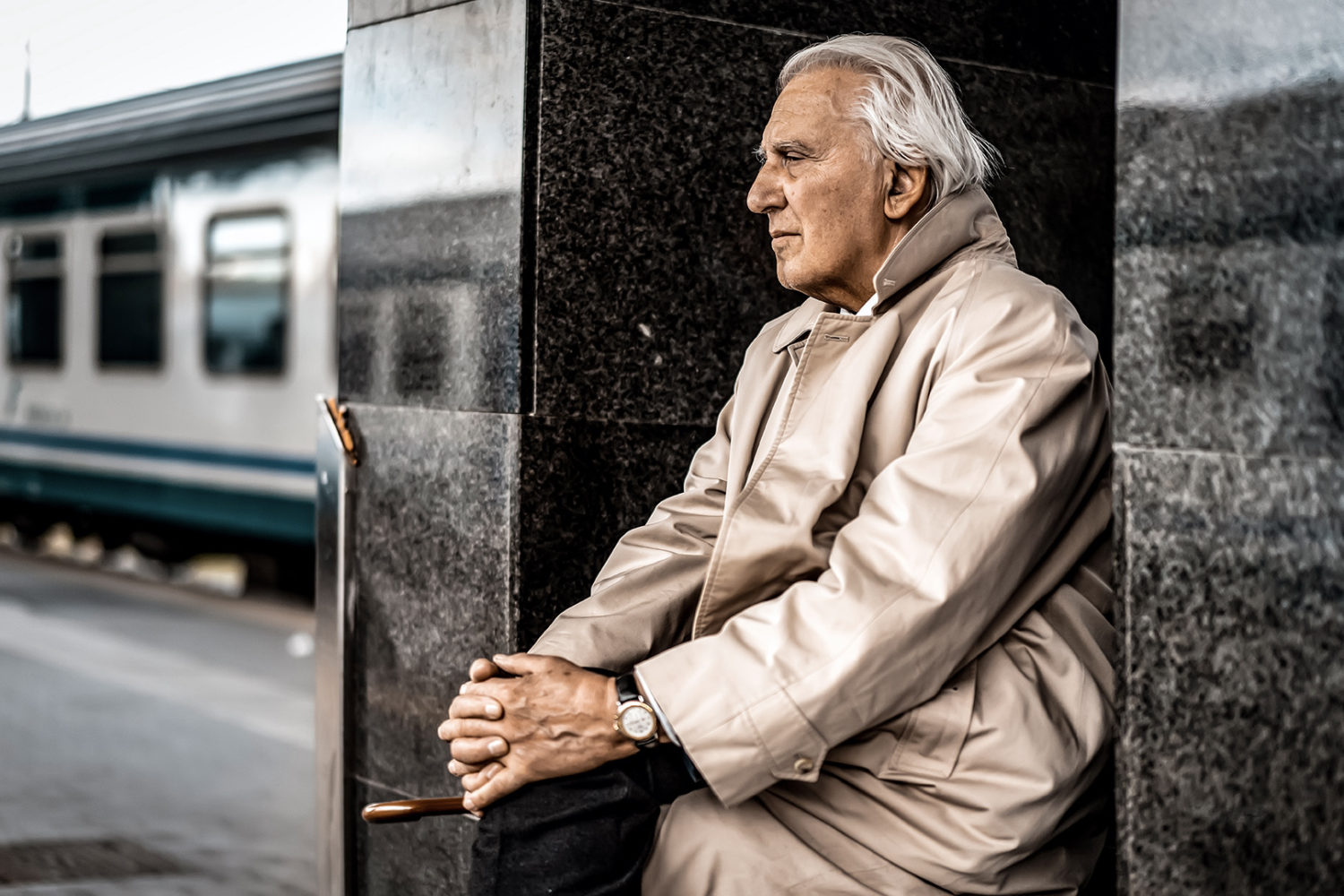 At 500px amazing photography is at our core, but these photos would not be possible without the talented people behind the lens. The 500px Spotlight series highlights the global and diverse photographers that are part of the 500px Community.

This week we are excited to introduce you to portrait photographer, Roberto Di Patrizi.

Hi Roberto, please introduce yourself to the 500px Community!

Born in 1964, I started photography in October 2010, when Donatella, my wife, gave me a camera as a gift for my birthday. I always shyly loved it, even though I was born a musician—I played guitar in bars and performed as a street singer. I played a lot, without a real project, experiencing many different works, until, at the age of 35, I started working on a TV channel—firstly as a musical entertainer, then as a broadcast technician, and later as a sound engineer. There, I also came in touch with computer graphics, and I really fell in love with it! This work experience lasted 13 years.

Then, I enrolled in a master’s degree for General 3D Artist, which gave me rudiments of photography, even with practical sessions. After the master’s program, I wanted to deepen the theme with a photography course. To get here I took a roundabout way. I’ve never liked shortcuts. Often, the beauty of a journey is not only the location to be reached, but also, and above all, the road you take to get there. 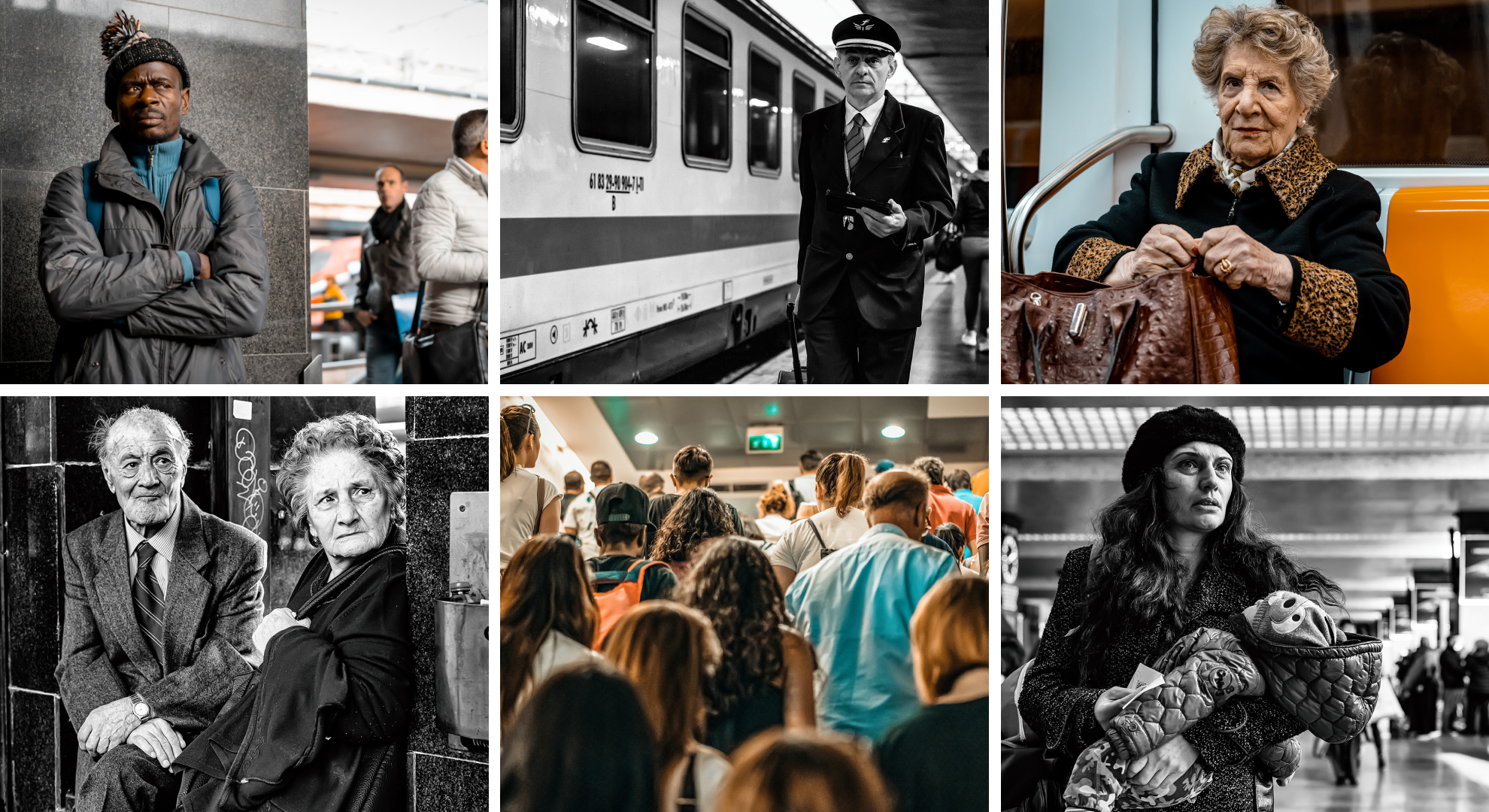 How did you come to specialize in taking portraits at railway stations?

A few years ago, my wife and I chose to move to the province. This is how my commuting life began. Railway stations, an immense crossroad of individuals of all ethnicities and nationalities, have become my hunting ground. In this fascinating no-man’s-land, so many stories intertwine every day and all of them deserve to be told. I believe that shooting is a way of deceiving time for a moment and secretly caressing eternity.

I have a little confession to make—sometimes I suffer from anxiety. Thoughts run and I can’t stop them. Photographing strangers makes my attention shift from within me to outside of me, and anxiety subsides. Basically, street photography is somehow my catharsis. 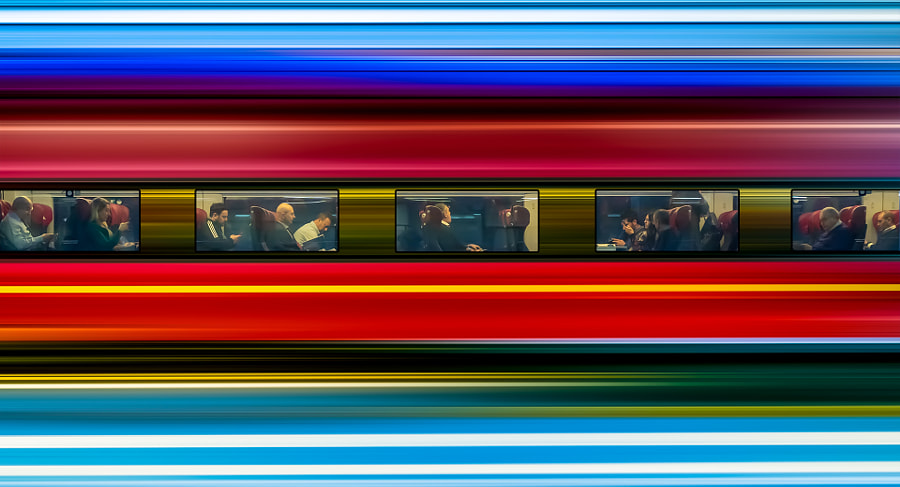 What are you trying to capture and convey to the viewer by having such a niche, capturing people in transition? Whether a short trip or a full move, your portraits show a type of intensity in the subjects’ faces.

People: a group of persons that, after all, I’m afraid of. I fear their idiocy as I fear mine. Because idiocy can kill. They can be sinister and malevolent, and very often gray. When I am in the crowd, I am that person. I judge, avoid, leave aside… and I go away guilty. But sometimes, in that same crowd, I notice people who don’t seem gray at all. Some of them are green, some are blue or red, despite everything, and I need to capture them in a shot to prove it.

Being able to catch those small nuances of daily life that can transform the ordinary into the extraordinary, this is the challenge. A look, a gesture, an expression. No man is an island. The opposite is true! And every time I sail through these archipelagos of souls, I am enchanted by the variety of microclimates. I imagine myself going through them with a submarine. My camera is the periscope. With every photo I take, I steal a frame from the hypothetical movie I’m shooting in my mind. How many main characters in thousands of screenplays, for millions of movies that I will never see! I wish I could hug them tight and say “everything will be alright”… or hear them say that to me. But it is not possible. Not for me. 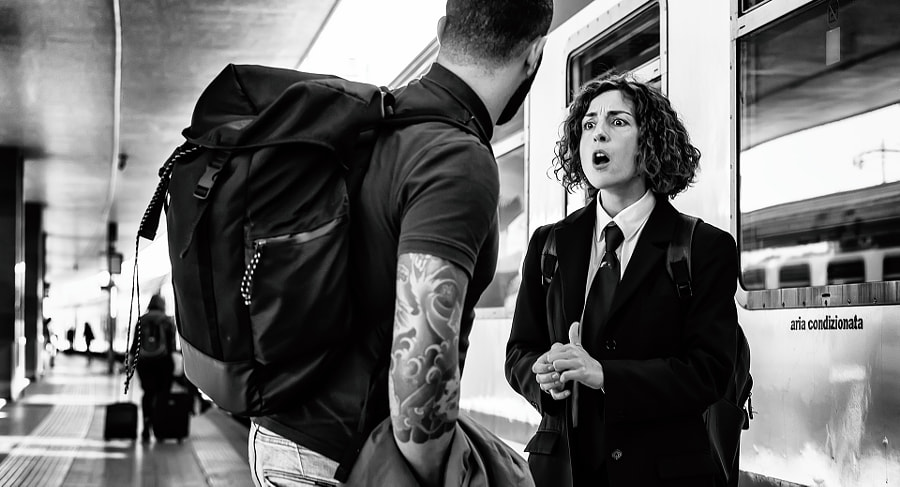 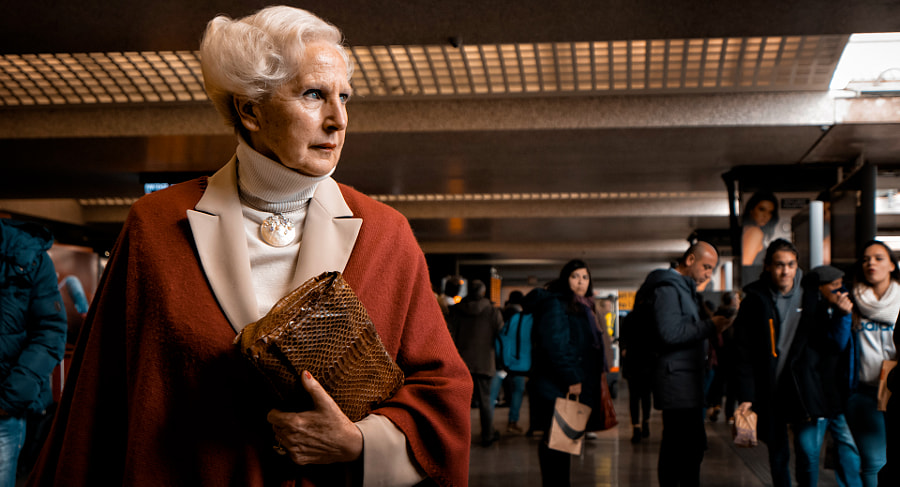 Your work has a mix of black and white as well as color. You don’t limit yourself to only one, but how do you choose when an image would be better in BW? Are there specific aesthetic considerations?

Yes—basically it’s a question of aesthetics. I like colors that have their own complementarity. However, when they are too distracting, I prefer to choose black and white. In short, I always try both solutions. Then I choose based on the result. My mood at the moment plays a fundamental role. 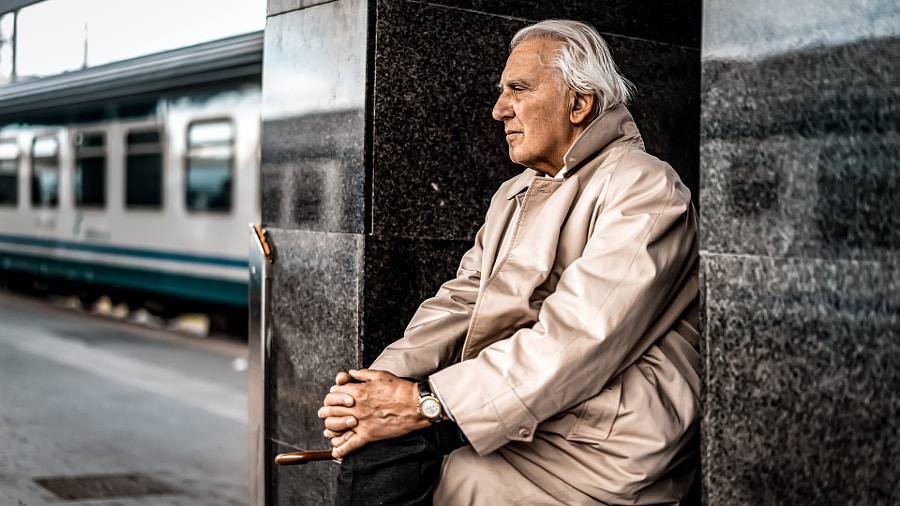 Many street photographers want to get that candid moment, which often means taking an unexpected shot and acting as a fly on the wall. What is your process for working with strangers while also respecting their rights and ownership of their image? 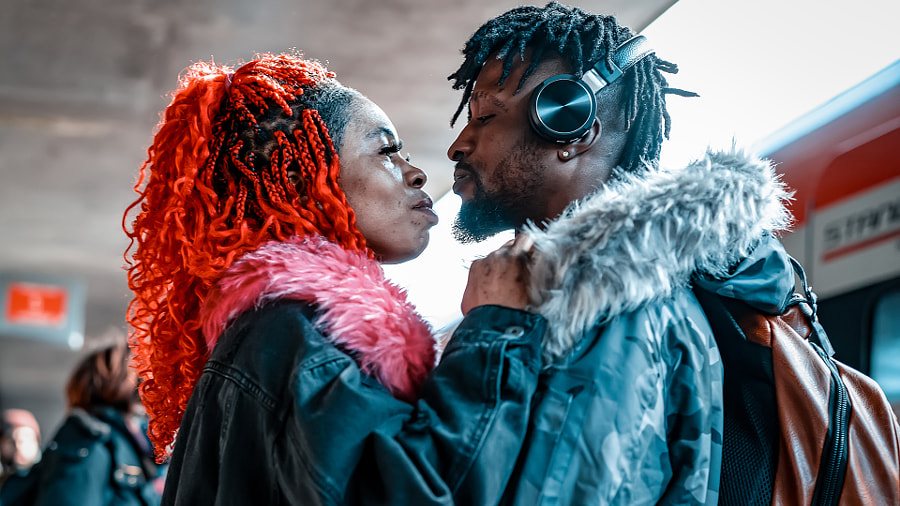 How do you edit your images, and what signifies that you are finished with that image?

Ah! My editing depends on my skills! I always try to learn new techniques. In fact, I often take old photos and go back to editing them. I am aware of my limitations. For this reason, I always shoot in raw. I hope to improve every year. My photos never stop being edited, substantially. 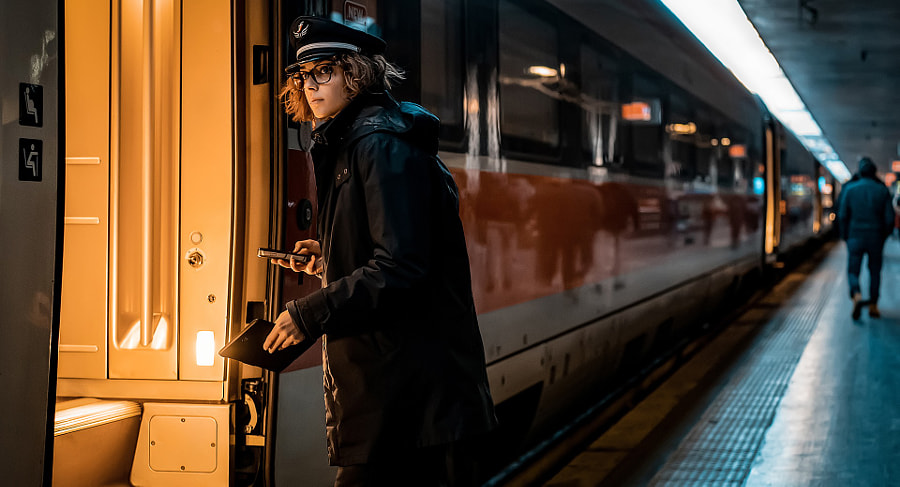 Do you think having a signature style is important, and how did you come to define yours?

Well, yes. Having your own style is crucial. How can you get it? This is a million-dollar question! Basically, we need to focus on a theme. My theme was the need to allay my anxiety. People made me anxious. By taking spontaneous portraits I made peace with the world. Then I transformed this emotion by rationalizing it into a uniform and constant project over time.

What advice would you give to new photographers looking to improve their practice?

Advice, you say? I can tell what was useful to me: 500px! Yes, I am not doing a wink. I owe a lot to this community. I have been attending it for many years. I learned a lot from looking at the photos of other photographers. I observed, I studied, I took notes about the lenses, and the camera settings, the ISO, the aperture, the shutter speed. And I tried to reproduce the same kind of photos. So, my advice is: shoot, shoot, shoot. We are luckier nowadays because we don’t have to buy film. 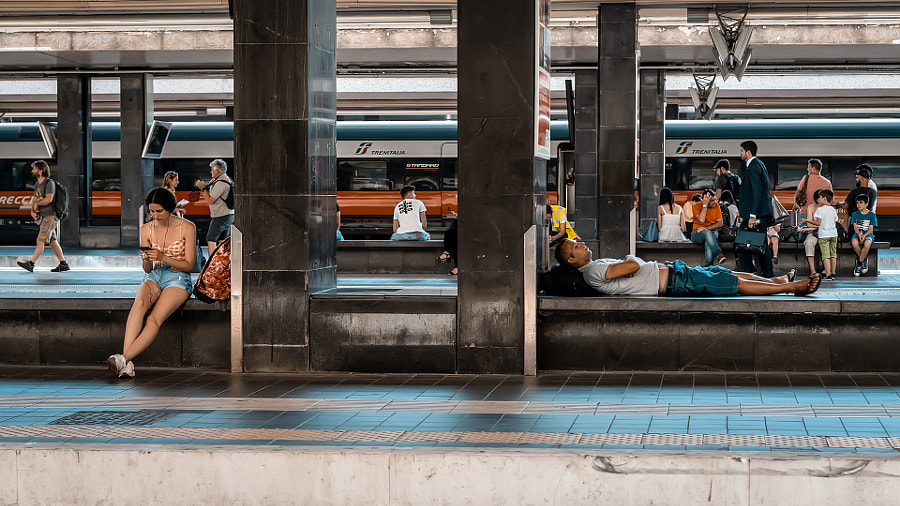 What is your favorite image on your 500px profile and why?

My favorite photo is that of the elderly man walking bent over beside the train. He had such a dramatic light on his face. I was so excited at the time. Soon after, I called my best friend to tell him that I had taken my best photo. I took it almost four years ago, but it still moves me when I look at it. 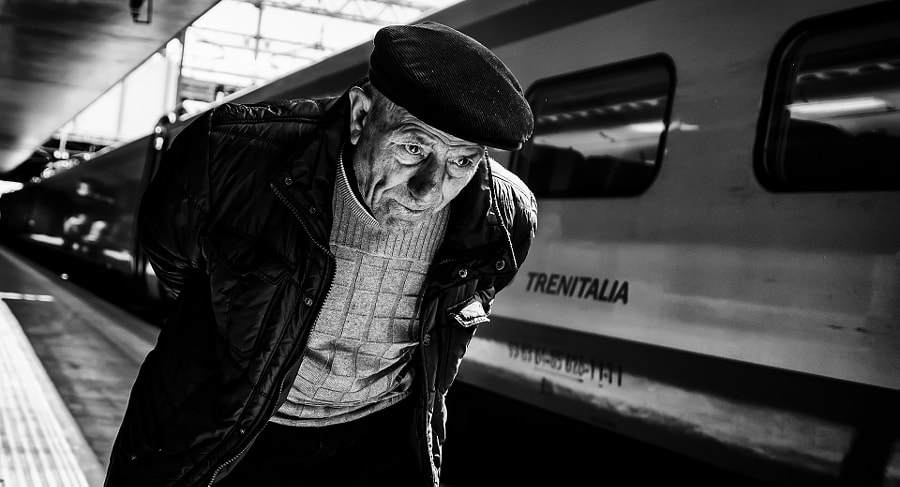 🦸 Apply a Comic Book Drawing Effect To Your Photos in Photoshop!
Surf Photographer Questions Beach Drones: ‘They Make a lot of Noise’
The Power Junkie v2 Can Power Three Devices from One Sony Battery
Make Your Photos Look 3D with Dodge and Burn in Capture One 23
UV Filter: Should You Use One on Your Camera Lens?