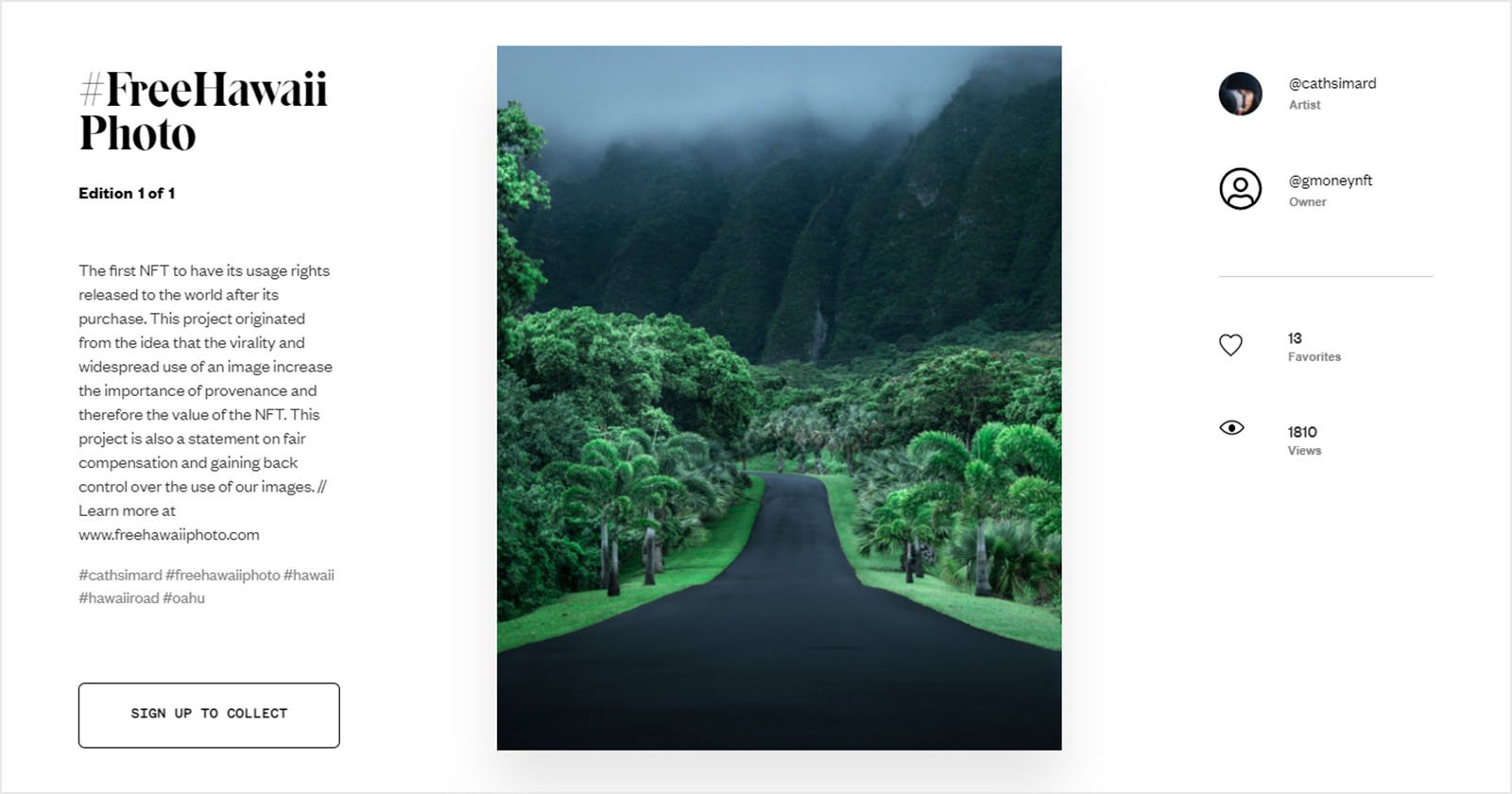 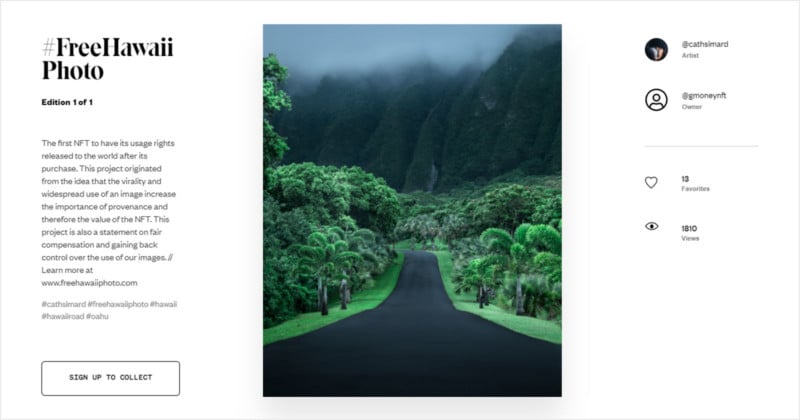 A photographer who was tired of chasing down copyright infringers to her most-stolen photo decided instead to sell it as an NFT and then release the photo’s usage rights to the world. That NFT has just sold at auction for a whopping $300,000.

Several years ago, Canadian photographer and Sony ambassador Cath Simard shot and shared a photo of a road on the Hawaiian island of Oahu.

The photograph then went viral online, being shared through websites like Reddit and across social media platforms, mostly without any credit to Simard as the original creator.

The photo has even become a top Google Images search result for “hawaii road”: 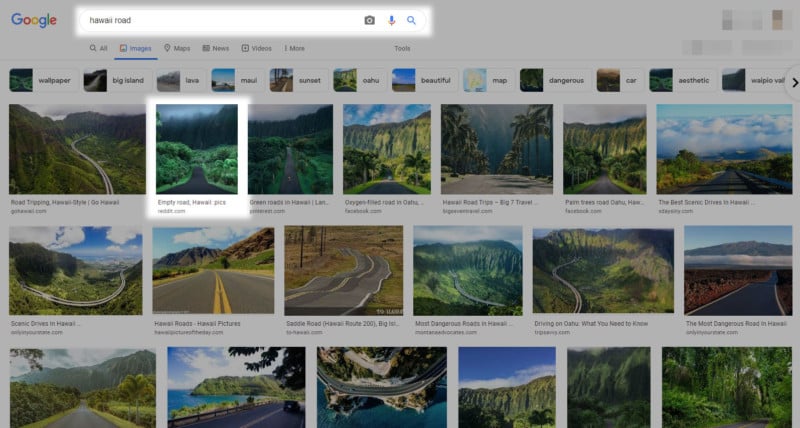 And as the photograph was shared over and over online, there are more and more cases of copyright infringement that Simard worked hard to fight. Despite signing up for online services that hunt down infringements and work to collect usage fees for photographers, Simard has been unable to collect a single dollar to show for her efforts.

After NFTs exploded onto the scene over the past several months, Simard was one of the first prominent photographers to become deeply involved in the emerging crypto-based industry. With several successful NFT sales under her belt, Simard this month decided she would change her tactics for her Hawaii photograph.

Instead of fighting for relatively small infringement payouts in a never-ending and ever-growing game of whack-a-mole, Simard would auction a single-edition NFT of the photo and then release the photo itself to the world for free commercial usage.

And the more widely the Hawaii photo is used around the world and Web, the most famous (and valuable) the single authenticated NFT becomes — that’s the idea, at least.

Thus, the #freehawaiiphoto project was born.

Read more: What is an NFT and Why Should Photographers Care?

(1/4) Introducing the #FreeHawaiiPhoto Project, the first NFT to have its rights released to the world after its purchase. Dropping tomorrow on @SuperRare !https://t.co/FZ2HBp3EKA pic.twitter.com/rxKLokzv8r

(2/4) This project originated from the idea that the virality & widespread use of an image increases the importance of provenance & therefore the value of the NFT. We believe that copies make the original more valuable.

(3/4) This project is also a statement of gaining back control over use of our images and fair compensation. #FreeHawaiiPhoto invites artists to break the boundaries of traditional licensing.

On September 19th, Simard minted the photo’s NFT on SuperRare and the auction was live.

“The first NFT to have its usage rights released to the world after its purchase,” the auction description reads. “This project originated from the idea that the virality and widespread use of an image increase the importance of provenance and therefore the value of the NFT. This project is also a statement on fair compensation and gaining back control over the use of our images.”

To reflect the large sums she should have been paid for unauthorized usage of the Hawaii photo, Simard set the reserve price of the auction at 100 Ether. With Ethereum trading around $3,000 to $3,800 in recent days, this pegged the value at north of $300,000.

Simard has built up connections with prominent NFT collectors during her 9 months in the NFT space, and one of them, the well-known NFT expert known as @gmoneyNFT put in the first bid at the reserve price.

That bid ended up being the lone bid, and Simard’s photo was sold for 100 Ether when the auction ended yesterday.

#FreeHawaiiPhoto had sold for 100ETH to the visionary and disruptor @gmoneyNFT

It is an absolutely honour to have the project supported by you.

The license is now UNLOCKED!

Read also: How to Mint an NFT: The Photographer’s Guide

Now that the auction has concluded, Simard’s famous Hawaii road photograph has now been released — you can download the photo here at resolutions up to 8126×10158, which is large enough for massive prints or billboards. The photo’s new license states that it can be used for any commercial purpose without attribution. The only two things you can’t do with the photo is to remint it as an NFT or license it to a 3rd party.

“The NFT space is one in which if you’re the first to do something, it’s usually seen as very high value, and this [particular concept] has never been done before.

“NFTs are a new possibility when it comes to making a living off your art. I’ve made more in NFTs within the last 6 months than [I have] licensing images for my entire life.”

The Lime Two is a New and Improved Hot Shoe-Mounted Light Meter
🔥 Change Hairstyles and Swap Hair in Photoshop!
How to Reverse Image Search on iPhone
Price and photos leak ahead of OM System 90mm f/3.5 Macro IS lens announcement
Specs leak for OM System M.Zuiko Digital ED 90mm F3.5 Macro IS PRO ahead of announcement