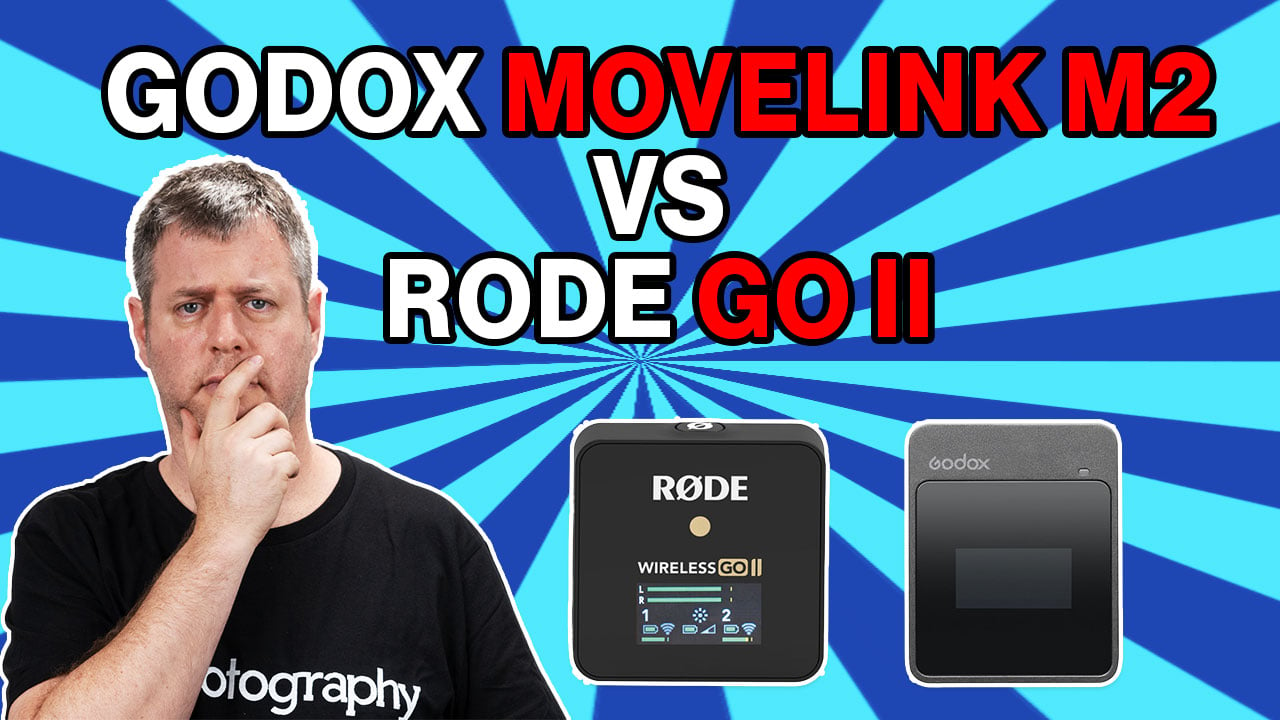 Neck mics have been around for as long as I can remember. You see them being used on movie sets, TV studios, and with on-location crews. And why not? They offer great sound quality and are not too conspicuous. A few years back Rode introduced the GO system, a mini wireless neck mic, that is a full solution – a microphone and transmitter in one small box, and a receiver in another small box. While it is not as hidden as your usual lav, it is super quick to use, and there is less hustle putting it up.

Since then, Rode came up with a second iteration for their popular Rode Go, the Rode Go II, and now Godox are entering the arena with their own solution, the Godox Movelink M2. Both systems share basic functionality and form-factor, but which is the right one for you?

Really, on the form factor front, both are impressive engineering achievements.

What’s in the box 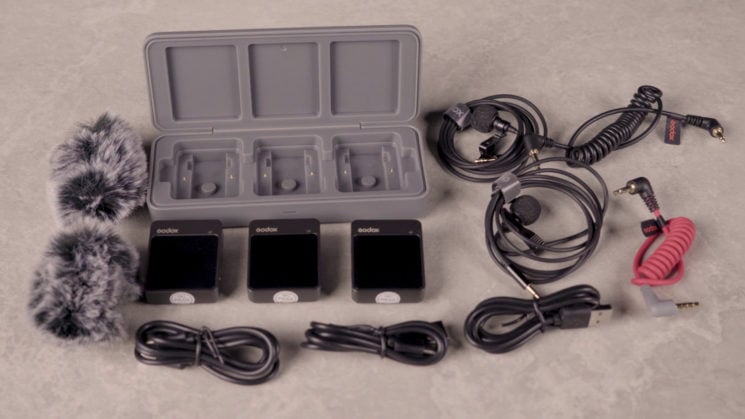 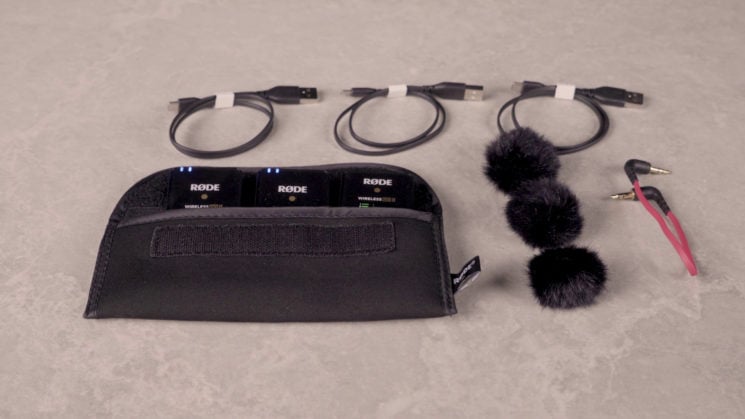 With both sets, you can work right after opening the box. But the Godox set comes with a bit more kit.

If you want to record to your phone, you’ll have to shell out about 20 extra bucks for a phone adapter (depending on your phone system).

Godox are a bit more generous and provide quite a lovely set of cables and adapters. The M2 package includes: 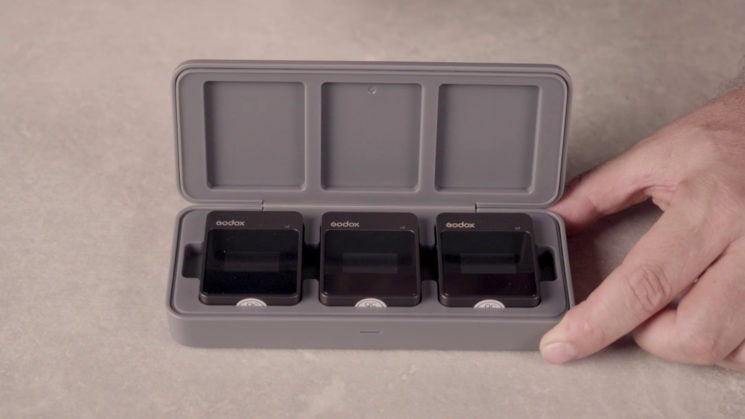 In the end, any mic, as features-pack as it may be, would be just a toy if the audio quality was lacking. I am happy to report that both mics sound great for their price range. The video has four recordings:

On paper, the Rode supports a range of up to 200 meters, and the Godox Movelink 2 will go up to 50. In our tests, the Godox disconnected after about 30 meters with line of sight, and the RODE lasted for at least 70, which is as far as we could in our parking lot.

Both transmitters use a clip that you can attach to your shirt… or your belt if you opt for the lav mic. Godox also includes a few magnetic discs that you can use to hide the transmitter under your shirt. Both receivers use a similar clip to go on your camera hot shoe. 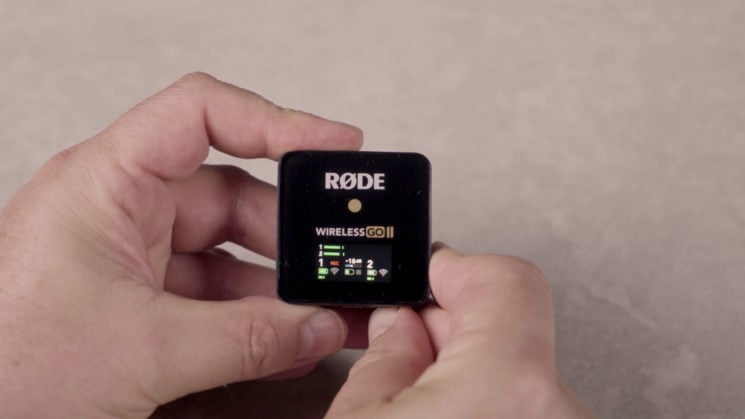 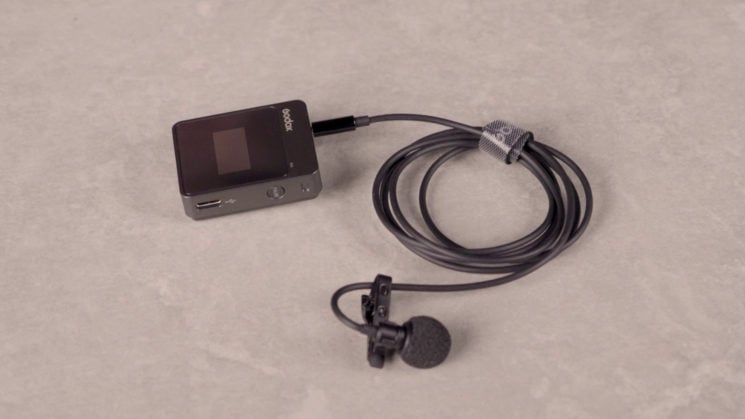 This is where it gets interesting, as both mics have different control schemes. The Godox Movelink uses a small uni-color screen to display each of the unit’s stats. It shows the menus, connection, battery status, and other vital information. It doesn’t show clipping alerts and it has a big delay when showing levels. That means that it would be hard to see any clipping.

The Rode, on the other hand, has a colorful screen that shows all the data, and the levels on this unit are super responsive and accurate. Sadly, only the receiver has a screen so all control is done from the camera/receiver side. I see the logic here if you have a camera op, but if you are shooting yourself, it can get quite tedious.

Rode also provides a useful software to set parameters on your mics. Things like recording quality, custom button function, gain mode, and selecting if you want to mix the mics to mono and have a safety channel or record each mic to its own channel.

One thing that was bothering me on the Rode is that there is no mute indication on the transmitter. You would actually have to closely monitor sound to see that you did not mute by accident.

Lastly, the Go 2 has software updates so it keeps getting features and bug fixes.

If you take a look at both units from high enough they are pretty similar. However, there is one feature that puts the RODE GO II in a different league here. It records. Not only does it record, but it also does so on the transmitter unit. And if you want, you can even have a minus 20DB safety channel. That means that even if you have a lot of radio interference you will still have clear audio from the micro SD cards. to put a cherry on the cream here, it can record in 24 bits which is usually reserved for high-end devices.

To access the recording files, though, you have to use RODE’s PC software – I am not a big fan of this method and would have preferred a microSD slot.

Both the Godox and the RODE sport a standard mini 3.5mm TRS jack. As expected.

The Godox also has a headphones jack to monitor sound. The Rode has an ominous USBC port that you can use as a digital PC output. But this is digital output so it does not work with USBC headsets for monitoring audio.

When you look at the recording, the Godox has about a 50-millisecond delay on the receiver which I found to be a bit annoying. 50ms is still within tolerance but if you are really picky, you’ll notice that and will want to re-sync your audio.

Both devices have plenty of battery time. We tested the RODE for six and a half hours and the M2 for five. This is understandable considering that the RODE is a bit bulkier.

The RODE Go II is currently selling for about $300 at B&H for the basic kit. If you want the two extra lav mics, you’d have to shell about $450. The GODOX including the hard case, more cables and two lav mics, is selling for about $200. That’s less than half of a similar package from RODE.

OK, which should you choose then?

So here we are in the final verdict where we answer, which system you should go for?

Well, if you are looking for a unit that is more budget-friendly, has a built-in display, a great charging case, and comes with all the parts that you’d ever need, go for the GODOX Movelink M2.

If you are looking for a unit that has internal recording, a bigger range, and more battery time, the Rode Go II is the unit for you.