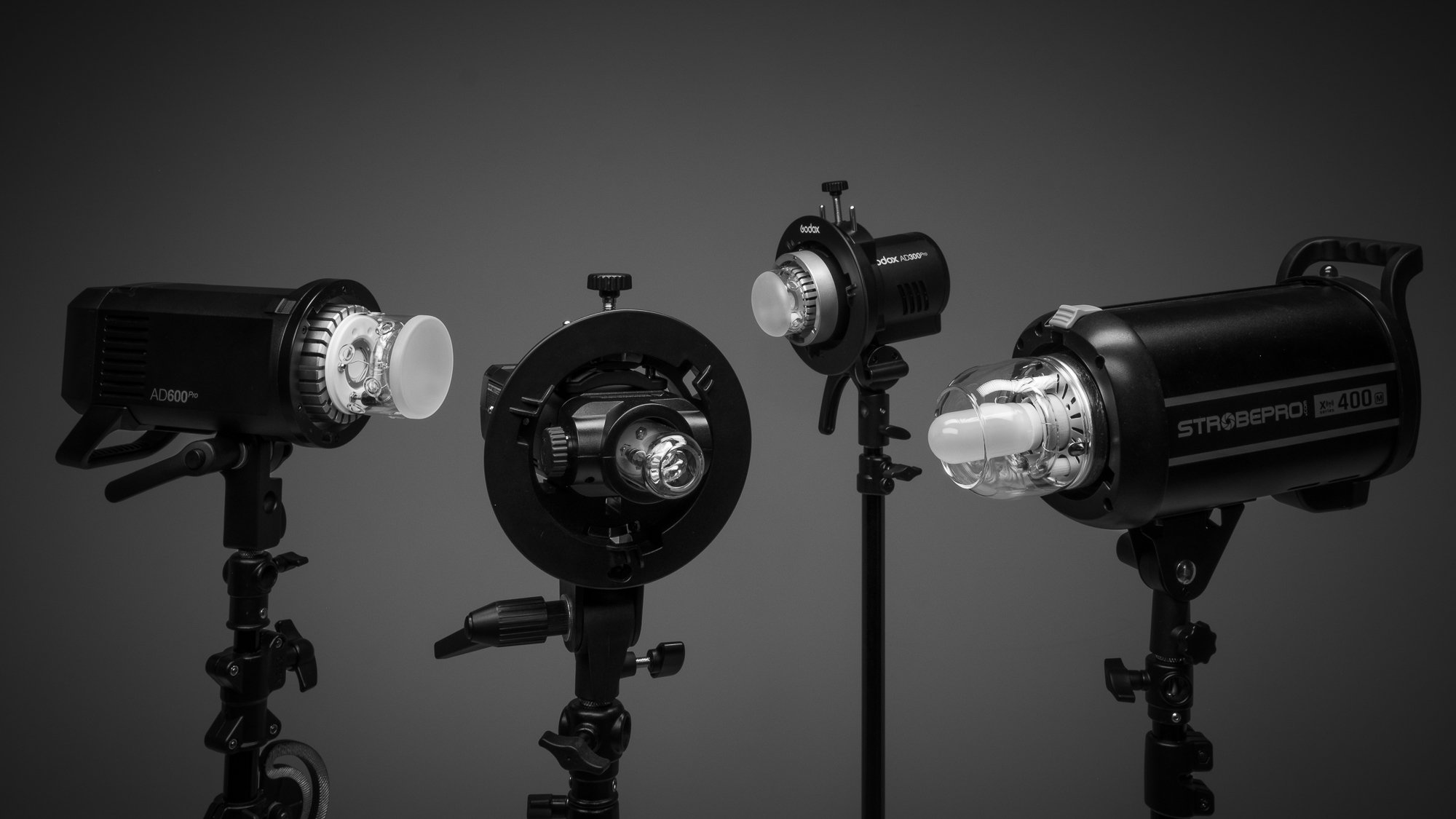 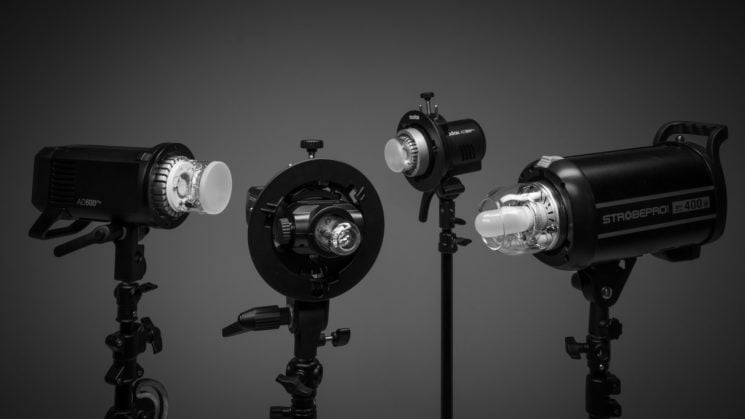 If you’re just starting out with strobes, there’s more choice than ever to overwhelm you with!  In this guide, we will help you systematically narrow down which lights are going to work best for your type of photography.

The world of strobes has changed quite a bit since we published our last article on the subject. While much of the information there remains relevant, we thought it was time for a fresh guide to highlight some of the technological improvements, particularly in power range which we will get to in a moment.

Let’s get right into it and discuss the main considerations when choosing a strobe:

Will you always have access to wall power, or would you like the ability to shoot in remote locations? This one question will narrow your search quite a bit. Plugin strobes tend to be more affordable, so they’ll probably make up the bulk of a traditional studio setup where budget is a concern. But if budget is not a concern, would there be performance sacrifices to going all-battery?

Well, as a rule, plugin strobes do have faster recycle times (the time to recharge between flashes). However, some recent battery models such as the Godox AD400 Pro and AD600 Pro have broken that rule. They are just as fast as any plugin model in their power categories!

Your second performance consideration would be the modelling lamp (the continuous light source meant to preview what your flash will look like). Plugin strobes use traditional tungsten lamps, while battery strobes will forgo the modelling light entirely, or use a power-efficient LED light instead. If you want a battery model, but a modelling light is important to you, we must again look to higher-end models like the Godox AD400 Pro and AD600 Pro to get similar performance to a traditional lamp.

Battery life, believe it or not, is not much of a concern for modern cordless strobes. They can easily handle 4-5 hours of heavy shooting in normal conditions and have battery life to spare. However, some Godox battery strobes do have AC adapters optionally available to give you the best of both worlds. We would much sooner recommend this approach over using an external battery pack with plugin strobes.  Cost-wise, those external packs just don’t make a lot of sense anymore, especially considering the added bulk you’ll have to bring with you on your location shoots.

Going for battery or plugin is going to be very user-dependent.  You may want to have one or two battery strobes for your location shoots, and then flesh out the rest of your studio with plugin strobes to keep costs down.  However, if you do have the budget for it, it’s certainly nice to get rid of cables completely.  We’ve created two completely separate sections on our website for battery powered strobes and plugin strobes to make navigation easy.

Maximum power is the first thing you’re likely to look at, especially considering that a strobe will usually have its power (in watt-seconds) listed as part of its model name (the Godox MS300 is a 300 watt-second light for example).

Firstly, it is really important to put these numbers in perspective. When comparing a 300 model strobe to a 600 model strobe, it’s true that the 600 has twice the power. However, in photography terms, that really only translates to asingle stop of light (the difference between between f/8 and f/11).

We’ve found that there is a tendency for beginners to overestimate how much power they need. Going to a 600 watt-second strobe for that extra stop of light is just not very practical if the strobe never gets used above 1/16 of its maximum power.  Like most things in photography, you pay a bit of a premium to eek out that extra little bit of performance at the top end. That full stop of light means twice the volume in capacitors adding to the weight, bulk, and cost of your strobe.

So how much is enough? Typically, even the highly compact Godox AD200 Pro has more than enough power for most general photography. We would really only recommend the big 600 model strobes (or the mighty Godox AD1200 Pro) if you would be the type of user that constantly pushes your strobes to the limit. If you plan on overpowering the midday sun, or shooting large subjects that require you to stop down to f/16 or smaller, then a more powerful strobe would be the right choice.

Minimum power is often an afterthought for a beginner, but it’s often more important than maximum power.  A high powered strobe may not be able to get low enough to allow you to shoot at a wide open aperture, overexposing your scene even at its minimum power setting.

The main thing that’s changed since we wrote our last article on the subject is that strobes now typically have much more power range.  A strobe’s power range is the number of stops it can drop below its maximum power (1/1).  With the expanded range we see on many modern strobes, a high powered strobe can often do it all—reaching your high maximum powers and low minimum powers.  This varies by model, so it’s important to make sure you’ll be able to hit your minimum power requirements before you buy.

The interesting thing to take note of is that a higher-powered strobe can occasionally reach lower powers than a lower-powered strobe, depending on the model. The good news is that you may no longer need a bunch of strobes at different powers to serve different purposes.

If you like to shoot at wide open apertures, any of our current battery options can get you a sufficiently low powered pop. In the plugin strobes, we’d typically recommend the Godox QT400ii for that kind of work.

If your strobe is too powerful, you could always use a neutral density filter.  But it’s better to not need to bother with such things if you have the choice.

4. TTL AND HSS (THE BELLS AND WHISTLES)

In 2021, it would be a shame if we didn’t talk about the advanced features available on many strobes such as TTL and HSS.

In simplest terms TTL is just an automatic mode for your strobe. TTL stands for “through the lens.” It is a process by which the strobe sends out a quick pre-flash that your camera can measure, which the flash then uses to determine an appropriate power setting. This all happens within a tiny fraction of a second.

TTL really comes into its own in sports and event photography where you will have no control over how close your subjects are to your strobe. A dancer moving from one side of the floor to the other isn’t going to pause what they are doing so you can run over with a light meter!  In dynamic shooting settings like these, TTL is a lifesaver. Pet photography, kids running around, wedding receptions, and similar situations can all benefit from TTL.

In a controlled environment, we would always recommend working in manual so that your flash exposures will be perfectly consistent from frame to frame.  If you are really only interested in portrait photography, for example, you will get very limited use out of TTL. For that reason, you might consider saving some money and going with a manual-only Godox AD600BM over the TTL capable Godox  AD600 Pro.

This is worth a quick mention, because it is a question we get occasionally: Yes, any TTL capable strobe can also shoot in manual!

Now let’s talk about HSS (high speed sync). Normally, your camera has a maximum flash sync speed, which is somewhere between 1/160 and 1/250 of a second depending on your camera model. This is the fastest shutter speed at which your sensor remains fully exposed for a moment. When you exceed your flash sync speed, it just means that the second curtain of your shutter has already moved into your frame before the first curtain has fully opened.  The result, when we add flash, is a dark bar encroaching on your frame.  That’s your second/rear curtain that you’re looking at.

High speed sync completely changes the behaviour of your flash. Instead of your flash releasing all of its energy at once, it releases a series of concurrent pulses so that your flash actually acts like a continuous light source for a brief moment. This allows you to exceed your flash sync speed and use any faster mechanical shutter speed available to your camera!

To illustrate why this is useful, imagine using your strobe outside at midday. If you want to use a wide open aperture, and you are limited to 1/250 s on your shutter, your sky is guaranteed to be blown out.  HSS allows you to bring your shutter speed back into the equation and regain control of your ambient light.

All of our current battery models and a couple of plugins (Qt400ii, QT600ii) support HSS. The big downside to HSS is that you will lose a lot of peak flash power when you use it.  For that reason, we recommend a 400W*s strobe at minimum for serious HSS work. That said, the AD200 Pro is still a competent HSS strobe when the sun gets a little lower.

One big reason Strobepro picked up the Godox brand is the incredible versatilty of options available to their users. The Godox ecosystem has only grown and improved over the years.

If you’ve ever used PocketWizards or some other radio receivers dangling from your strobes, you can put those days behind you. Everything in Godox’s current line has built-in radio functionality that can all be accessed with just one controller.

This includes their speedlites, which all have the added ability to act as controllers themselves! By large, most systems offer strobes, or speedlites, but not both.

Of course we’re biased, but there really isn’t another system that gives you the same level of choice and flexibility at the time of this writing.

If you haven’t noticed yet, we’ve definitely arrived at the shameless plug portion of this article.

If you’re investing in some studio lights, you’ll want to know that the retailer or manufacturer has your back. At Strobepro, we provide a 2-year in-house warranty on any light we sell at no extra cost to the customer.  Beyond the warranty, we still aim to provide repairs as affordably as possible for our customers.

We are also committed to providing concise instructional videos for our products, so you can feel comfortable getting started!  We know that studio lighting has a bit of a learning curve, so we try to make it as easy as possible for you.

If everything still goes terribly wrong, we’re here to offer our technical assistance!  Strobepro is staffed with actual photographers who use this stuff regularly, and we’re always happy to lend our expertise.

Kevin Greenhough is a portrait and travel photographer based in Calgary, Canada where he also works as the media coordinator for Strobepro Studio Lighting.  You can check out his personal work at kevportrait.com. This article was also published here at Strobepro and shared with permission.

The Sword-Billed Hummingbird: A Knight of the Andes
Canon Designs 300mm f/2.3 and 400mm f/5 Autofocus Mirror Lenses
💡 Turn On Headlights In Photoshop!
How to Reverse Image Search on iPhone
Specs leak for OM System M.Zuiko Digital ED 90mm F3.5 Macro IS PRO ahead of announcement