From Jean-Michel Basquiat walking the runway for Comme des Garçons in the 1980s to Alexander McQueen revealing his American flag boxers in 2000, New York Fashion Week has delivered some of the most iconic moments in fashion history. But as any photographer knows, there’s just as much happening on the street as there is inside the shows themselves. It was in the streets, after all, that the famous New York Times fashion photographer Bill Cunningham tracked the emergence of trends ranging from ankle-length coats in the late ’80s to straw fedoras nearly two decades later.

On September 8, Fashion Week returned to New York, following two seasons of predominantly digital presentations. Opening with Ulla Johnson and culminating in Tom Ford, this year’s NYFW will see the return of in-person shows from everyone from Thom Browne to Telfar. In honor of the much-anticipated comeback of a city that’s always been known for its resiliency as well as its style, we wanted to share our best tips for shooting street style, during fashion week and beyond. 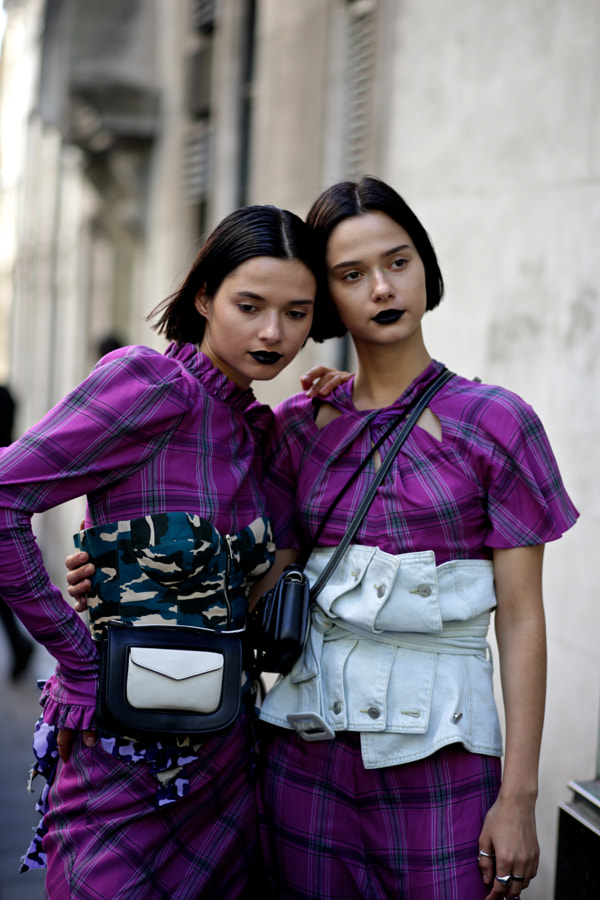 From Bill Cunningham and Jamel Shabazz to Scott Schuman, Tommy Ton, and Phil Oh, there’s a treasure trove of street-style photographers, past and present, whose work is waiting to be explored. Immerse yourself in the genre; take note of what you like about the photographers who’ve come before you, and incorporate those eclectic influences into your own work. Of course, you can’t cover all the shows at fashion week, so prioritize the most important ones, based on the designers you like and the people set to attend. Don’t discount the smaller off-site shows; while you’re less likely to run into the big names, you might discover unique stories. People often arrive at least 20 to 30 minutes early to runway shows, so give yourself plenty of time to hang out outside before events to keep an eye out for intriguing characters. Once it’s over, stick around a little longer after everyone else has left 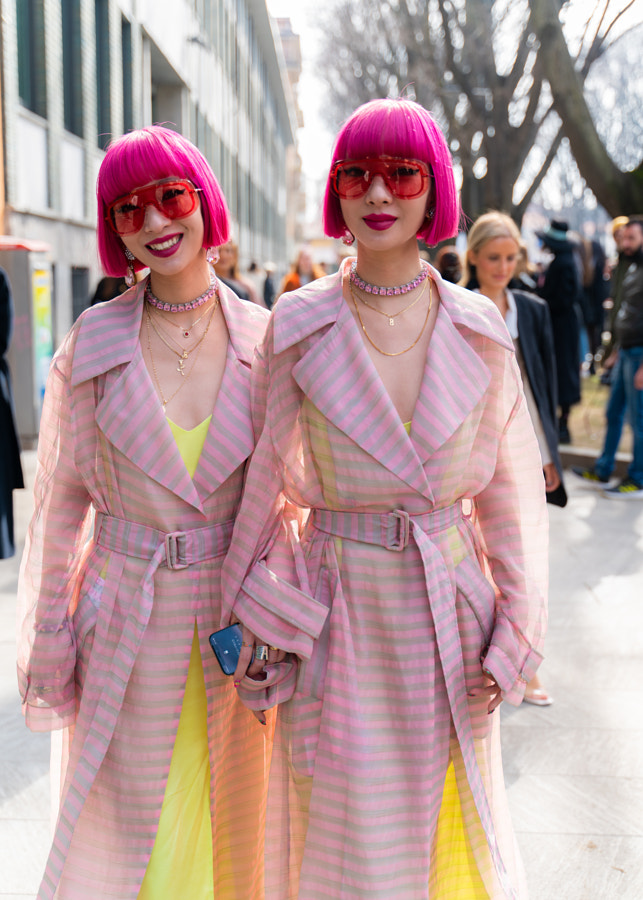 You might only get a few great shots out of a full day of shooting. Photographing street style usually involves waiting, standing, or walking for long periods, so bring water and snacks, and wear comfy but professional clothing. Practicality matters just as much as style. Just consider that Bill Cunningham, perhaps the most iconic street fashion photographer of all time, was never to be seen without his blue French worker’s jacket (bought for $20, according to legend) and black sneakers. 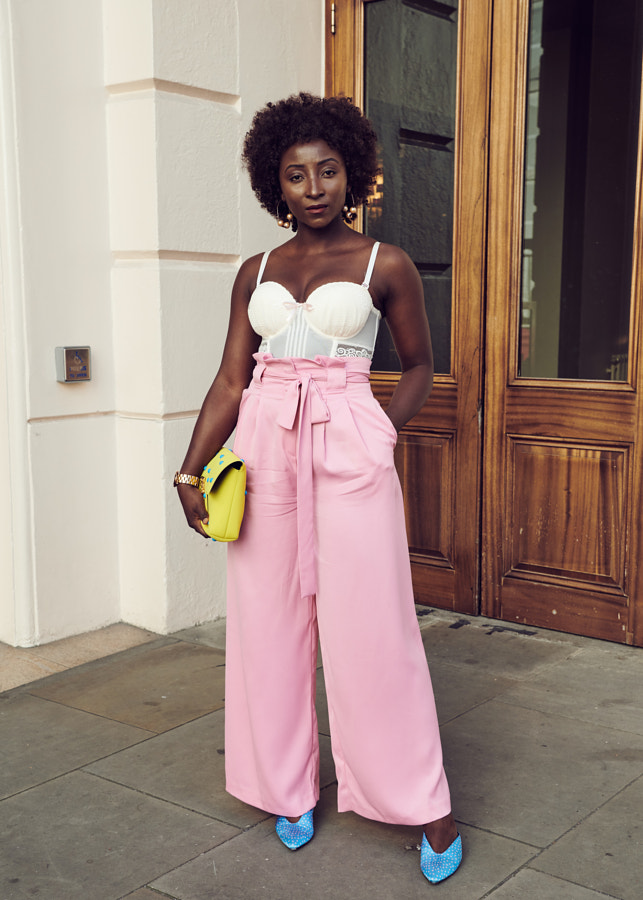 During fashion weeks, you might be rushing from place to place throughout the day, but in general, it can help to scout a specific street corner or hangout and set up shop there until the right person walks by. Bill Cunningham, for instance, often returned to 57th Street and Fifth Avenue, where he became a fixture. After his death, the corner was named after him.

Do some digging into local spots, and choose a street that consistently offers up sartorial surprises. It could be an iconic spot like Fifth Avenue, or it could be a lesser-known treasure in an overlooked neighborhood. Get to know the people there, and you’ll blend into the scene. 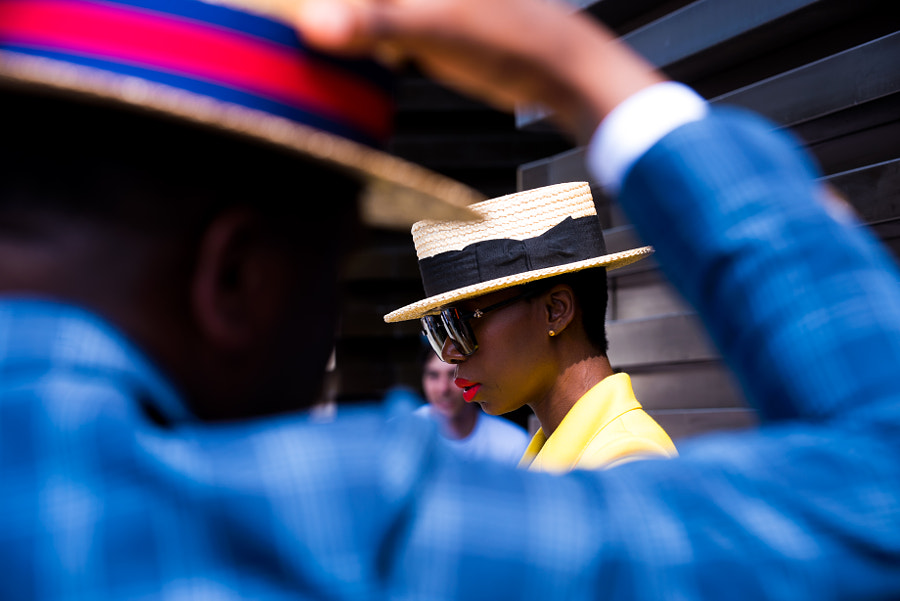 Especially during fashion weeks, people want to be seen and photographed. Many will start to pose as soon as they see you, but don’t feel shy about approaching strangers either. Explain what you love about their look, and ask if you can take a few pictures. Once they agree, feel free to direct them a bit. If there are too many people or other distractions in your shot, for example, guide your subject over to a wall for a cleaner background. Or ask them to move into a patch of even light or shade. Be confident and demonstrate that you know what you’re doing. 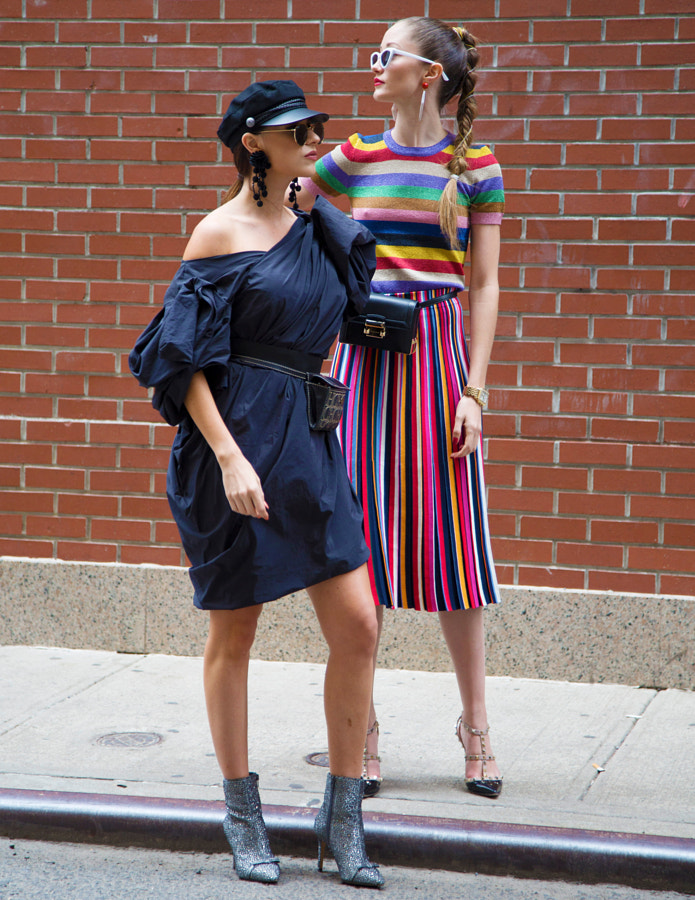 While people tend to pose when they see a camera, the street is also the perfect place to capture candid moments and expressions. Sometimes, even if the clothes are quite simple, it can be a person’s posture, the swagger in their step, or even the way they hold a purse that steals the show. Pay attention to how people carry themselves, and think of ways to capture that essence. While it can sometimes help to ask permission, you don’t have to if it would come at the expense of losing the moment. 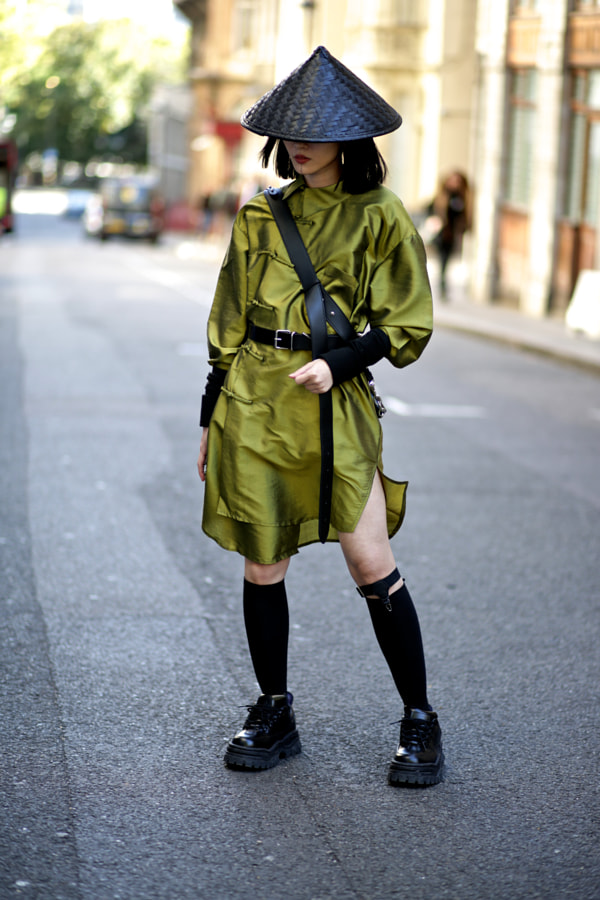 Know the key players, but look for surprises too

Do your research, and follow designers, models, and editors you admire. Consider planning your day around where they’ll be. Photographers will be rushing to catch a glimpse of these people, so a little advance preparation often pays off.

Of course, you don’t have to be chasing celebrities all day; you can also familiarize yourself with local or under-the-radar style icons and innovators who haven’t yet hit the mainstream. Sometimes, when everyone’s crowding around trying to photograph the big stars, they miss out on someone else who’s just as interesting: an aspiring makeup artist, a fashion student, an assistant, etc. 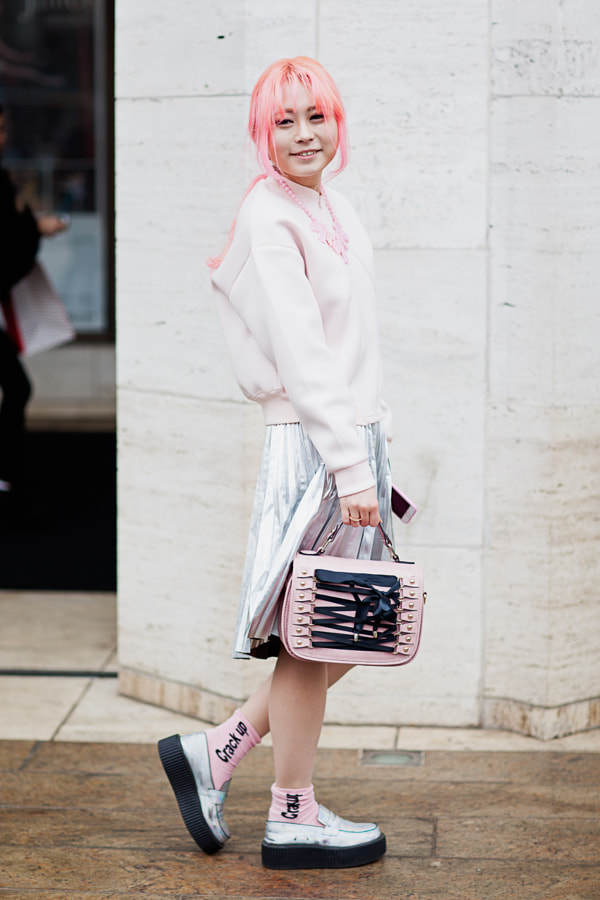 Prime lenses like the 85mm are popular among street-style photographers because they have a larger maximum aperture. That means you can open up your lens wide enough to blur your background and create that nice bokeh effect for separation. 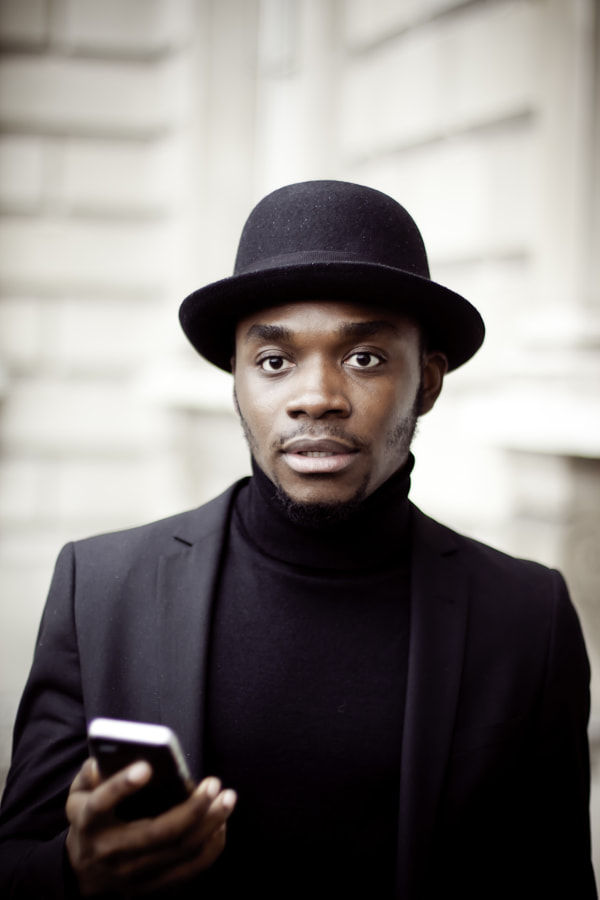 Keep some business cards on hand in case you meet someone interesting who wants to collaborate with you on a future shoot. Get your name out there. Connect with other photographers you see out and about at fashion week; these people might be your colleagues for years to come. When networking, always be respectful, and avoid taking up too much of their time. Many of the people you’ll encounter during fashion week are busy and on the clock. Sometimes, it’s the tiniest things that make or break a photo: the way someone’s rolled their sleeves, the cascade of their hair, an eye-catching accessory, or a tattoo that helps tell someone’s story. The best stories can be found in the smallest details, so keep your eyes peeled. 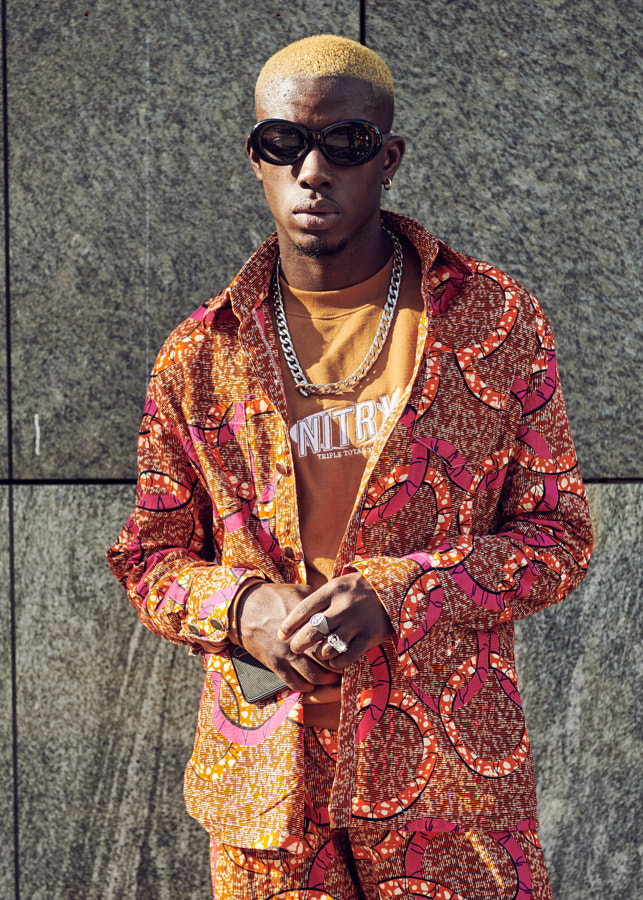 One last lesson from Bill Cunningham, the godfather of street style: for much of his career, he used a manual Nikon FM2, before ultimately transitioning to the Nikon D40x. For him, shooting great photos wasn’t about having the latest gear; it was about finding the right people. For that reason, the best camera is the one you have with you.

Bring a camera you’ll feel comfortable lugging around all day. Sylvia Plachy, who covered New York culture for The Village Voice from 1974 to 2004, once said she takes her best pictures when she’s on the way to or coming from a job. Fashion week or not, you never know who you’ll encounter, so stay prepared.