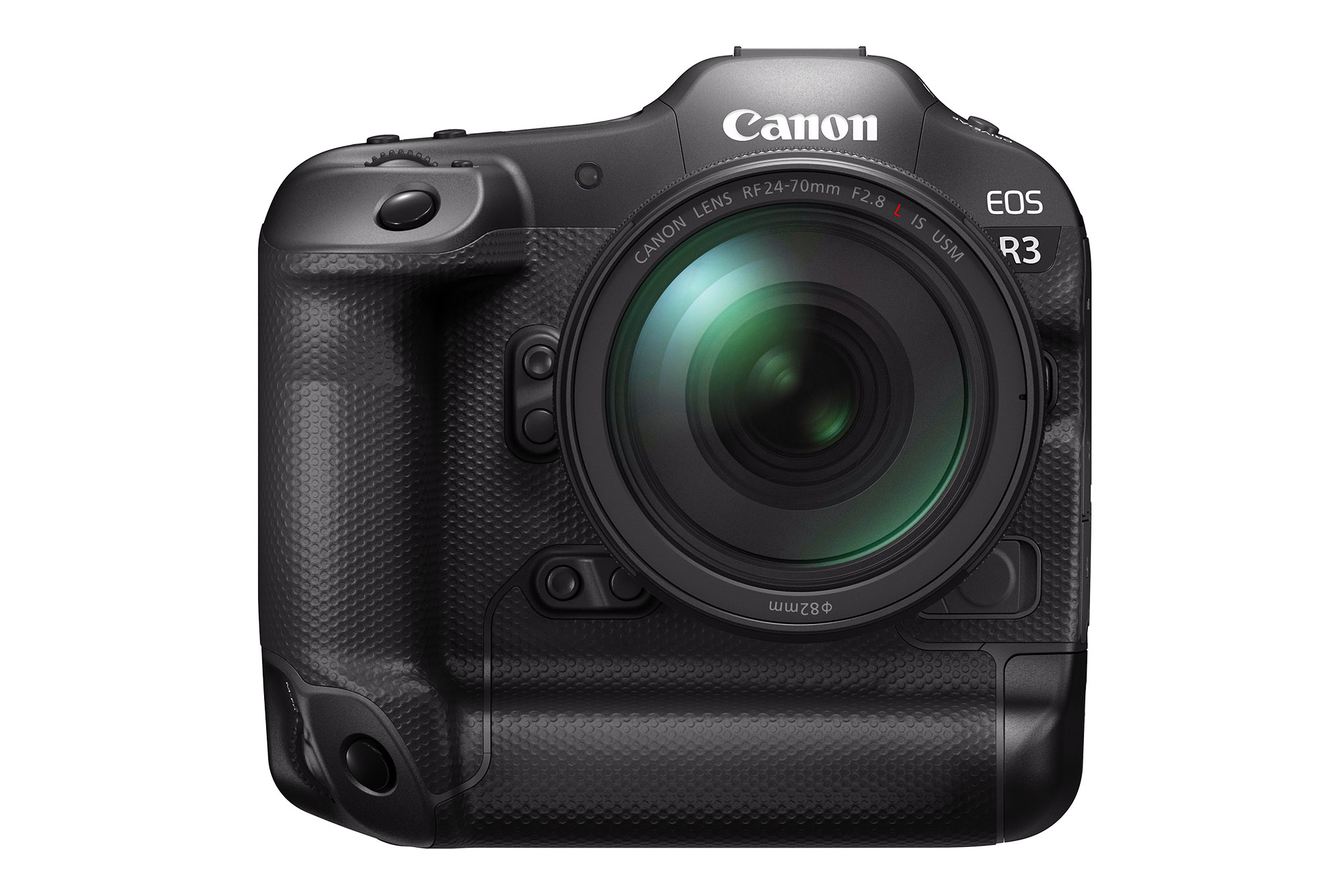 Canon just announced its highest-end mirrorless camera ever, the $6000 EOS R3 (shipping November). The R3 has a 24 megapixel stacked BSI sensor and is capable of capturing blackout-free 30 FPS with full autofocus and auto exposure. Perhaps the most exciting feature is the eye-sensing autofocus that positions the initial focusing point wherever the photographer looks. 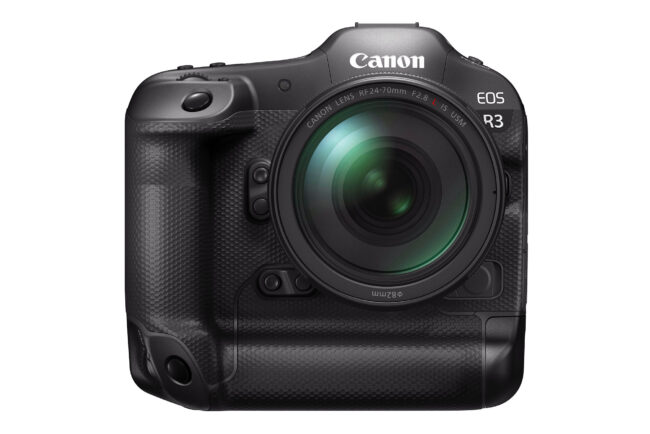 There was a time when DSLRs had unambiguously better performance for sports and wildlife photography than mirrorless cameras, especially for autofocus tracking on fast-moving subjects. But in recent years – beginning with the Sony A9 series and continuing with the the Sony A1, Canon EOS R6, and Canon EOS R5 – mirrorless cameras have been rapidly catching up and even eclipsing their older brothers for those genres. The EOS R3 feels like it was built specifically to push that trend even further.

To be specific, the EOS R3 retains the highly regarded 1053-point Dual Pixel AF system found on the Canon EOS R5 and R6, adding some useful improvements along the way. Canon says the EOS R3 is capable of autofocusing in -7.5 EV conditions, compared to -6.5 EV on the R6 and -6 EV on the R5. (Note, though, that these figures are measured with an f/1.2 lens; at the usual f/2 standard used by most manufacturers, the values are -6, -5, and -4.5 respectively.)

The EOS R3 also adds an eye-sensing autofocus mode whose sky-high potential can hardly be overstated. In essence, rather than focusing where you position a focus box in the viewfinder, the R3 focuses where you look. Well… sort of. I’ll let Canon explain:

“The EOS R3 camera will provide photographers with the ability to select the initial area for AF tracking by simply looking directly at the viewfinder location where they want to begin AF. With Eye input AF2 and Servo AF activated, the camera will focus on and track moving subjects at that location in the frame. When Face Detect + Tracking is active, the camera will continue to follow moving subjects around the entire active AF area.”

In other words, this feature is a way to point to the initial area of the frame where you want to begin autofocus. After that, Canon’s usual focus tracking algorithms will do the heavy lifting to follow your subject around the frame. It’s hardly a bad result considering that Canon’s existing tracking algorithms are so good, but it’s not quite the “mind reading” autofocus that I’ve seen some people hope for or describe.

Will Canon eventually expand this feature so it’s not just about initial focus acquisition, but the entire tracking process as well? I’d be shocked if they didn’t – though whether such a feature makes it into the R3 via a firmware update or is reserved for a future camera is anyone’s guess. In any case, the technology is there, and that’s why I say the potential is sky high. If eye-sensing autofocus works well enough in the future, it could all but replace existing autofocus algorithms for 99% of photographers.

But enough about that. Let’s take a look at the full list of specifications for the Canon EOS R3 to see what this camera is capable of.

While the standout features are the ones meant for sports and wildlife photography – 30 FPS, no viewfinder blackout, 150 (or 1000+) image buffer – there’s something for other potential customers as well. Video shooters who may have been expecting slow motion 4K video will be happy to know that the R3 also does 6K slow motion video! 6K video is 6144 × 3160 pixels per frame (AKA about 19 megapixels) whereas standard 4K is 3840 × 2160 (about 8 megapixels). The ability to shoot 6K video at 60 FPS slow motion is something previously found only on dedicated cinema cameras and could open up many creative possibilities in the right hands. 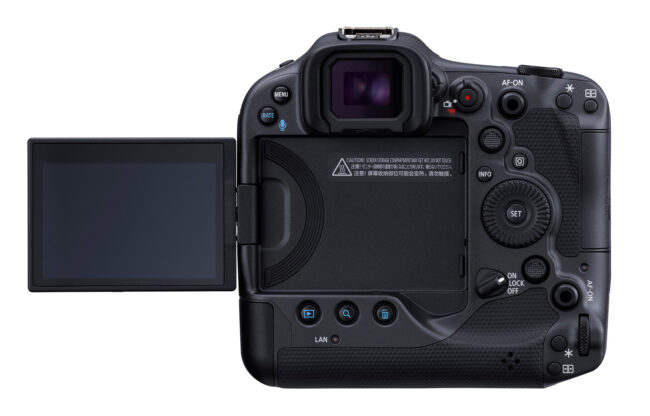 Many of the EOS R3’s other features are somewhat expected of such a high-end camera, but it doesn’t make them any less useful. The specified 8-stop image stabilization is carried over from the EOS R5 and R6, and it’s just as impressive now as it was then. So too with the top-of-the-line 5.76 million dot viewfinder, which refreshes at a rate of 120 FPS (AKA almost no lag at all) and sports a large 0.76× magnification. Likewise, the EOS R3 ticks the boxes on necessary features for pro-level camera like dual card slots and a relatively long battery life of 760 shots.

The EOS R3 has the usual form factor of most flagship cameras with the integrated grip and vertical controls. In this case, the entire camera body is machined from one piece of magnesium alloy for increased durability, and the weight savings of mirrorless actually make it a much lighter camera than may have been expected. At just over a kilogram / 2.2 pounds, the EOS R3 is closer in weight to the 5D Mark IV (890 g) than to the 1DX Mark II (1440 g).

And then there’s the sensor. In a world of 40+ megapixel cameras from almost every manufacturer, and Canon’s own EOS R5 with 45 megapixels and 20 FPS shooting, does the EOS R3 really hold its own? It all depends on what you’re after. For many photographers, 24 megapixels is more than enough for any reasonable subject, and other considerations like autofocus performance are of much greater importance.

Also, keep in mind that the EOS R3 has Canon’s first ever BSI (back-side illuminated) stacked sensor. BSI sensors in general can capture light more efficiently than traditional front-side illuminated sensors, often leading to better dynamic range and noise performance. Stacked sensor designs, on the other hand, allow for faster readout than traditional designs (hence the high FPS and lack of viewfinder blackout). Whether the EOS R3 actually has better image quality than the EOS R5 or R6 remains to be seen, but if it does, the new sensor design will be the reason. 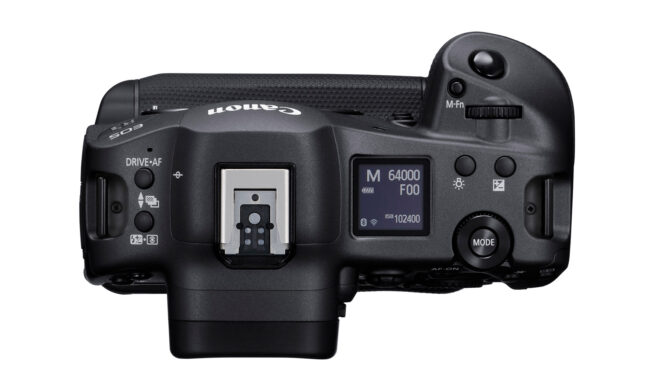 We can’t wait to test the Canon EOS R3 at Photography Life and compare it against other sports-oriented mirrorless cameras on the market (including the upcoming, higher resolution Nikon Z9). In the meantime, if you want to purchase the Canon EOS R3, it is probably a good idea to pre-order it to secure a place in line. With all the supply chain issues across the world in recent months, it’s difficult to know if Canon will be able to produce the EOS R3 in enough quantity to reach initial demand.

Here are our pre-order links to B&H and Adorama. The EOS R3 is scheduled to begin shipping in November:

Below is Canon’s formal press release.

Building on the success of the EOS R camera series, Canon U.S.A. Inc., a leader in digital imaging solutions, today announced the next leap forward in full-frame mirrorless cameras – the professional-grade Canon EOS R3. The new camera leverages the advancements in technology that Canon has developed since the original EOS R launch in 2018 and bridges the gap between the immensely popular EOS R5 and the world-renowned Canon flagship EOS-1D X line. The EOS R3 is the first “3” series camera from Canon since the widely used EOS-3 film camera launched in 1998.

The EOS R3 camera’s features greatly emphasize superb AF performance and speed with fast-moving subjects. It was designed to meet the reliability and durability demands of professionals, even when working in some extremely challenging conditions.

“The launch of the EOS R3 sets a new benchmark for the Canon EOS R camera system. Canon listened carefully to the voices of professionals when developing a camera to meet their standards,” said Tatsuro “Tony” Kano, executive vice president and general manager of Canon U.S.A.’s Imaging Technologies & Communications Group. “The EOS R3 is a monumental evolution in digital imaging technology. I look forward to seeing the camera in action on the sidelines of sporting events and in the hands of nature and wildlife photographers across the globe.”

The core of the EOS R3 features a Canon designed and manufactured 24.1-megapixel back-illuminated stacked CMOS sensor. The sensor is the first of its kind from Canon, and when combined with the DIGIC X processor, delivers a high-speed readout allowing for continuous blackout-free shooting1 at up to 30 fps in electronic (silent) shutter mode and up to 12 fps in mechanical shutter, with minimum rolling electronic shutter distortion. The combination also increases the high sensitivity, light-capturing efficiency of a native ISO range of 100-102400, expandable up to 204,800 for still images. Like the EOS R5 and R6, the camera features the improved Dual Pixel CMOS AF II with 1,053 AF Points and evolved EOS iTR tracking down to EV -7.5 for subjects such as eye, face, head, animals2, and select cars and motorcycles. In addition, the camera features up to 8 stops3 of in-body image stabilized (IBIS) shake correction.

Leveraging technology and performance feedback from the popular EOS R5 and EOS R6 cameras, the EOS R3 uses Deep-Learning technology to further enhance eye and body detection for even better performance during portrait and action-type shooting. Featuring a new 5.76-million-dot and 120fps blackout-free1 Electronic Viewfinder, the EOS R3 camera will provide photographers with the ability to select the initial area for AF tracking by simply looking directly at the viewfinder location where they want to begin AF. With Eye input AF2 and Servo AF activated, the camera will focus on and track moving subjects at that location in the frame. When Face Detect + Tracking is active, the camera will continue to follow moving subjects around the entire active AF area.

Additional features of the EOS R3 Full-Frame Mirrorless Camera include:

The Canon EOS R3 Full-Frame Mirrorless Camera is scheduled to be available in November 2021 for a suggested retail price of $5999.00*. For more information, please visit usa.canon.com.

About Canon U.S.A., Inc.
Canon U.S.A., Inc., is a leading provider of consumer, business-to-business, and industrial digital imaging solutions to the United States and to Latin America and the Caribbean markets. With approximately $30.4 billion in global revenue, its parent company, Canon Inc. (NYSE:CAJ), ranks third overall in U.S. patents granted in 2020† and is one of Fortune Magazine’s World’s Most Admired Companies in 2020. Canon U.S.A. is dedicated to its Kyosei philosophy of social and environmental responsibility. To keep apprised of the latest news from Canon U.S.A., sign up for the Company’s RSS news feed by visiting www.usa.canon.com/rss and follow us on Twitter @CanonUSA.

†Based on weekly patent counts issued by United States Patent and Trademark Office.

* Specifications, availability and price are subject to change without notice. Actual prices are set by individual dealers and may vary.

1 Blackout(s) may occur in some cases; such as when the built-in memory is full or when the flash battery is fully recharged after the battery ran out during continuous shooting.

3 When combined with certain IS lenses such as the RF24-105mm F4 IS L USM, or when used with certain non-IS lenses as well. See individual lens product page for more information.

Instagram May Be Considering a Paid Subscription Plan with a Blue Badge
Can You Find the X? Photographer’s Gigapixel Images Contain Hidden Code
Give your portraits a film look with Lightroom CC
Rode’s NTH-100 headphones are now a headset with the new NTH-Mic microphone
Photographer Larry Chen on Capturing Rally Driver Ken Block’s Life and Career