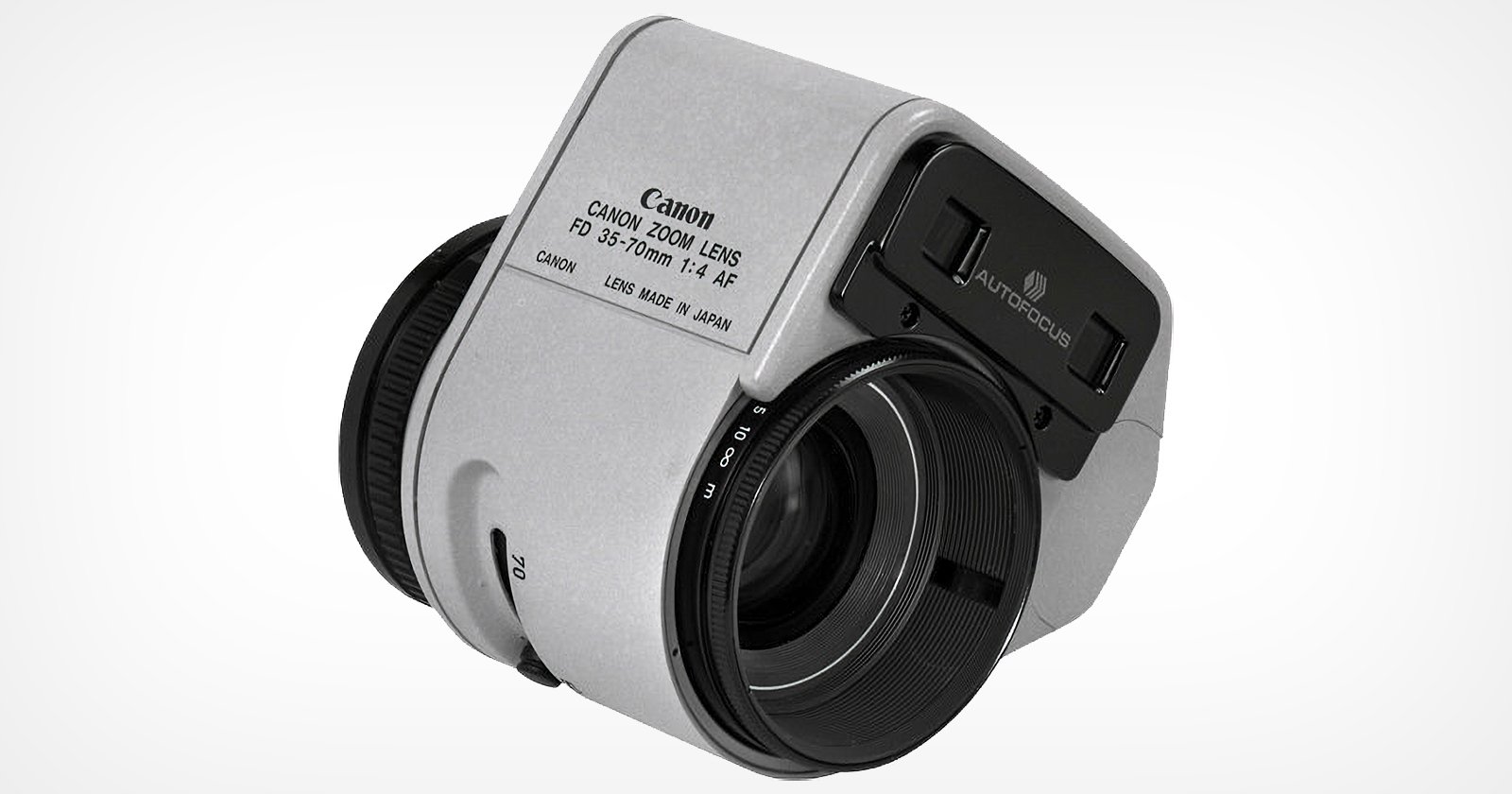 The Canon Zoom Lens FD 35-70mm f/4 AF was a lens originally manufactured in 1981 and features an unusual motor system that allowed it to autofocus. In Kai Wong’s 13-minute video, he shows how it still works remarkably well even today.

Spotted by Fstoppers, the FD 35-70mm f/4 AF took Canon’s successful lens and added a large box above the lens which housed a mechanism that would allow for autofocus. It used Canon’s Solid State Triangulation (SST) system that originally appeared in the AF35ML compact camera that also launched in 1981.

According to a story on MIR, the SST mechanism used triangulation to measure shooting distance. The measurement is performed by observing a subject from two points, hence the two small lenses that are visible on the front of the large autofocus box of the FD 35-70mm f/4 AF. The two points were slightly angled so that incoming light rays that would bounce off a subject would come in and be triangulated by a small CCD image sensor inside the system. Canon describes it as such:

The SST method is a system in which information on the photographed object that enters the sensor through two fixed mirrors is converted into an electric signal and distance is measured by a microcomputer, with focusing performed by moving a distance ring with a motor. The latest fixed imaging device CCD (charge-coupled device) technology is adopted to provide high resolution and a broad dynamic range able to detect low to high luminance, making it less susceptible to the contrast and pattern size of the photographed object and enabling highly precise autofocusing. Also, as the SST method does not have a movable section in the distance measuring mechanism, no vibration or electric noise is caused, which provides high reliability fitting of a high-end SLR camera.

The system, as evidenced by Kai’s video above, works remarkably well. While he is using a mount adapter, at the time the lens was compatible with any Canon FD-mount camera, making autofocus something anyone with such a camera capable of upgrading to an autofocus lens.

The company would later use a similar system for the FD mount of the Canon T80 in 1985 which was able to autofocus with one of three lenses that had integrated autofocus motors. Canon would eventually abandon autofocus on the FD mount as it moved towards the EOS system in 1987.

While the system clearly works well, its implementation on the 35-70mm f/4 lens has a clear downside: it’s huge and bulky. While it isn’t particularly heavy, it is a cumbersome addition to a camera system that would have normally been much smaller and easier to transport. While the technology behind the autofocus system still works, it has since been replaced with methods that are far more compact.