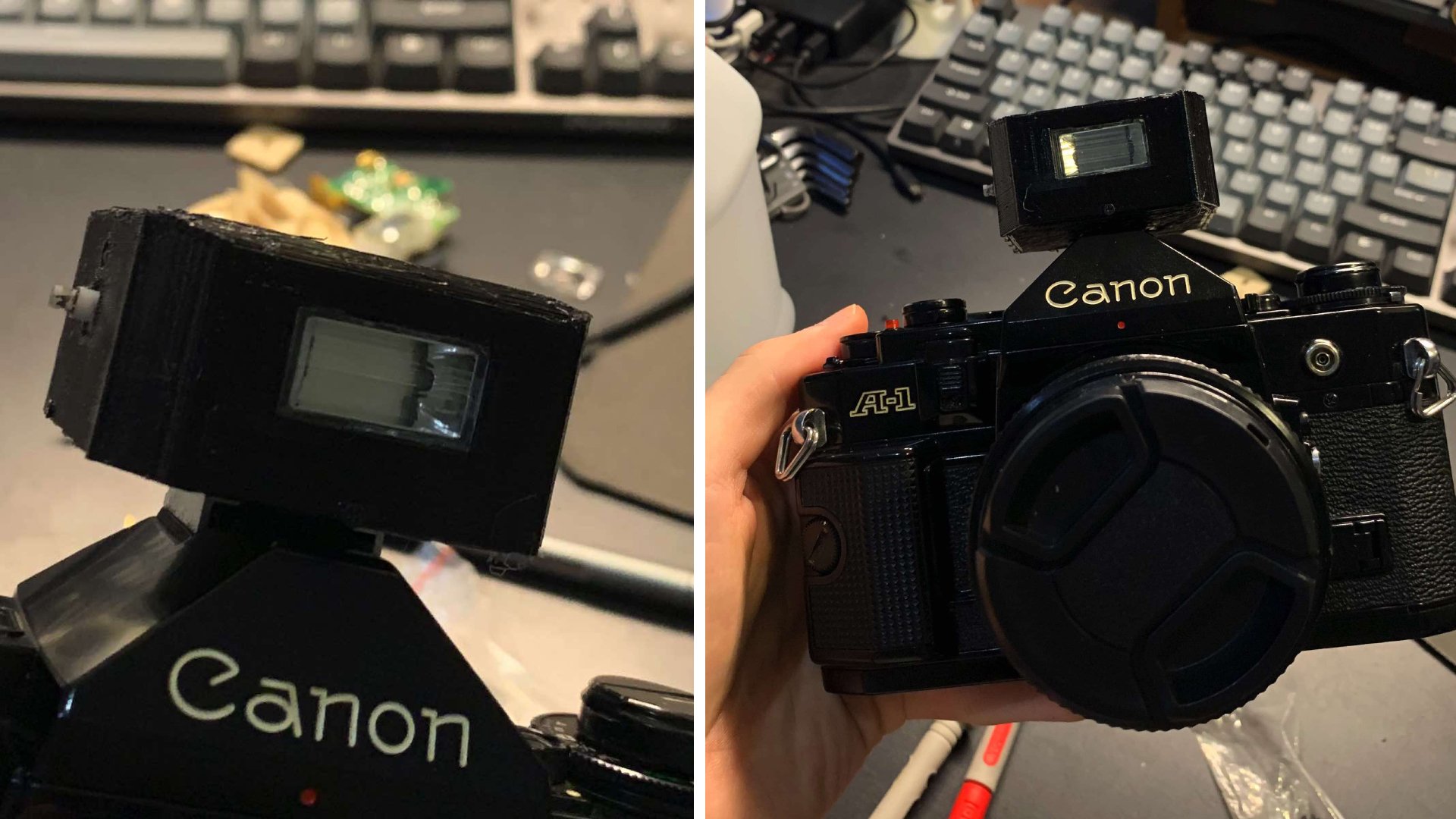 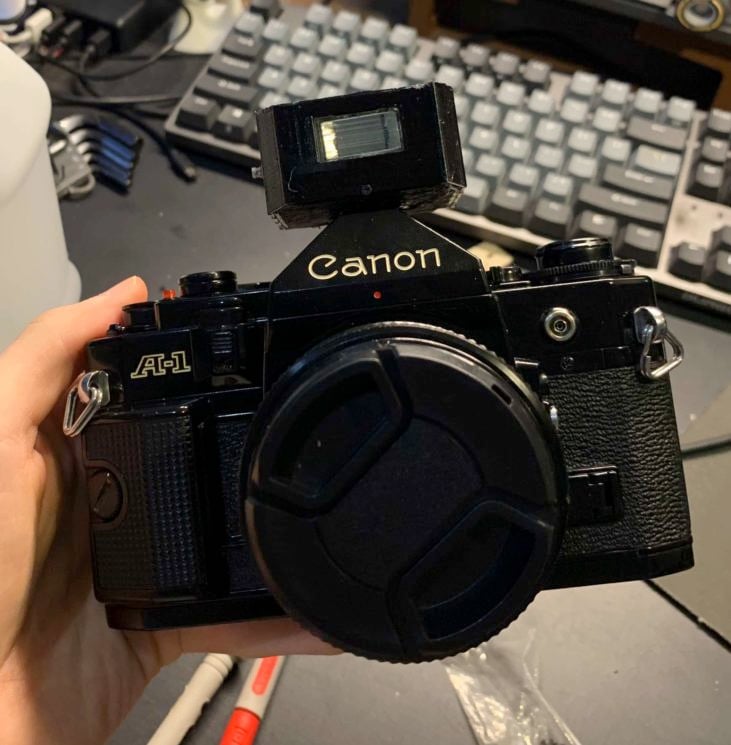 A bit of background

Recently I bought a film camera from the 1970’s – the Canon A-1. Considering that the camera is almost 3x older than me, it was no surprise that there are a few issues with it. The first camera I got jammed before I even loaded in my first roll, and the replacement camera had a battery drainage issue (which took an almost complete disassembly to fix).

But anyway, that isn’t the point of this blog post. Electrical problems aside, my main issue with this camera is its lack of a flash. Unbeknownst to me when I bought this camera, film cameras can’t really operate without a ridiculous amount of light (at least by modern camera standards). Even in a reasonably lit room, the camera struggles to take photos without the help of a tripod. This led to me trying some creative solutions, with limited success.

Trying to take a photo in a dimly lit McDonalds. The setup & the result.

I tried to find a camera flash online, but all of them were huge – like almost bigger than the actual camera. I didn’t exactly want to show up to parties looking like the paparazzi, so I decided to make my own small flash module.

Why doesn’t anyone make a small camera flash??

The camera flash I built uses the flash circuit from a cheap Fuji QuickSnap disposable camera which I got for only 50hkd ($7 USD). Make sure to discharge the capacitor before handling the circuit! It’s charged up to 300v, so you really don’t want it to touch it while it’s still charged. 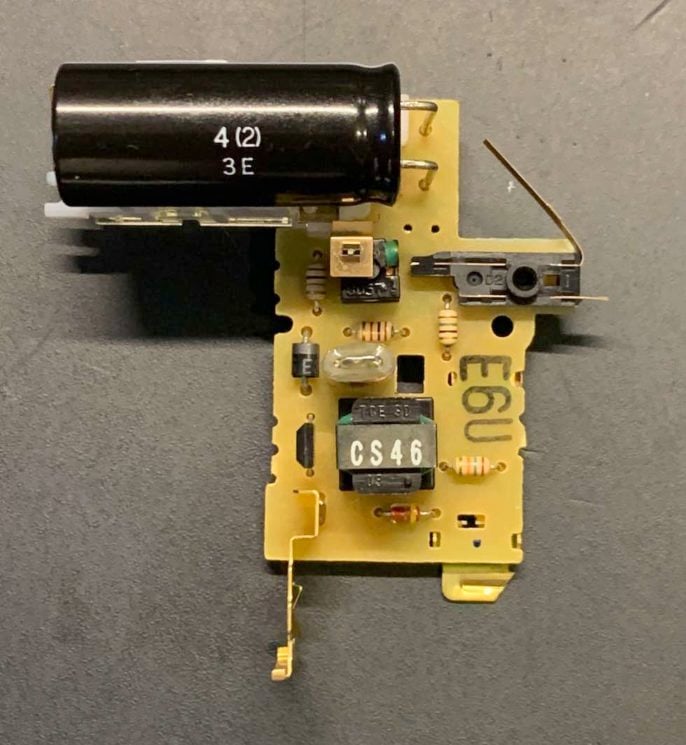 Flash pcb from a disposable camera. Don’t forget to discharge the cap!

There are two switches in the circuit: one to charge the cap and one to trigger the flash. For the charging switch, I simply attached a toggle switch up to it. The trigger switch was a bit more complicated, however. It should be wired up to the camera’s hot shoe so that the flash will trigger exactly when the photo is taken. However, wiring the trigger directly to the hot shoe would cause a couple of hundred volts to pass through the camera, frying it. (Note: Some older cameras would be fine with this voltage because they have physical trigger contacts, however newer camera would definitely get damaged).

I instead designed and ordered a pcb based on this schematic. You can find the pcb files on my github. This circuit takes in the ~300v trigger voltage and turns it into a 5v for the camera’s hotshoe. Click on the link for the schematic for a really good explanation on how the circuit works.

I then modeled up an enclosure for the circuits, along with a hotshoe with contacts. The contacts used in the 3d printed hotshoe are taken from the copper contacts on the disposable camera’s pcb. And that’s it! I now have a small camera flash. 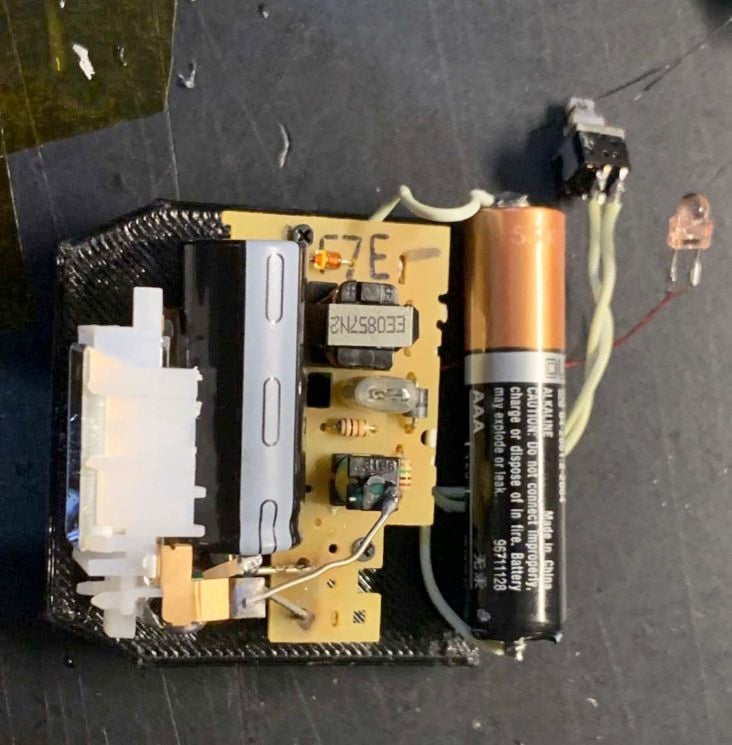 Inside the flash. Please ignore that I soldered directly to a battery. 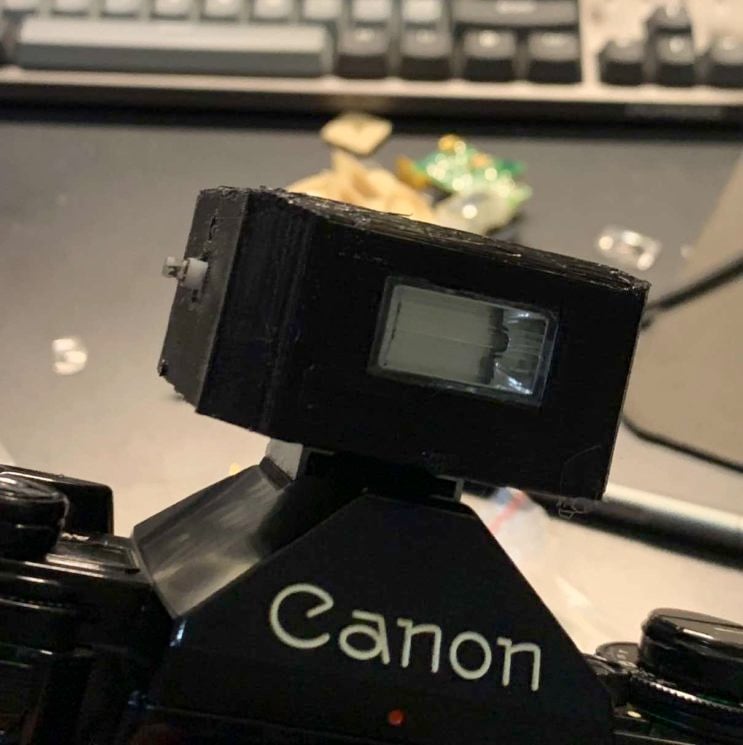 The final product. Note the charging toggle switch on the left.

How to use the flash

You may have noticed that there are no settings on the flash at all. The big bulky flashes allow you to select the distance of your subject and tell you what aperture to use, but my flash has nothing like that at all. I simply just use the disposable camera’s fixed settings of f/10 @ 400 ISO (adjust aperture depending on your film’s ISO). You should also keep the subject within ~3m. This gives the flash a theoretical guide number of 50, but who knows how accurate that is considering it’s a cheap disposable camera.

I ended up meeting all of my initial goals for this project. I now have a “discreet” flash for my film camera that works perfectly for my purposes. The hotshoe contacts are a little bit finicky, so I might buy a pc sync cord so I can use the pc socket in my camera which will have a much more reliable connection.

Joshua Bird is an amateur photographer and avid maker currently studying Computer Science at the University of Cambridge. You can check out his other photography and programming projects on his website. This article was also published here and shared with permission.

Photography News: Canon Lens Rumors, Tycho Crater Up Close
💡 Turn On Headlights In Photoshop!
How to Develop B&W Film at Home: A Simple Guide for Mere Mortals
UV Filter: Should You Use One on Your Camera Lens?
Canon Designs 300mm f/2.3 and 400mm f/5 Autofocus Mirror Lenses