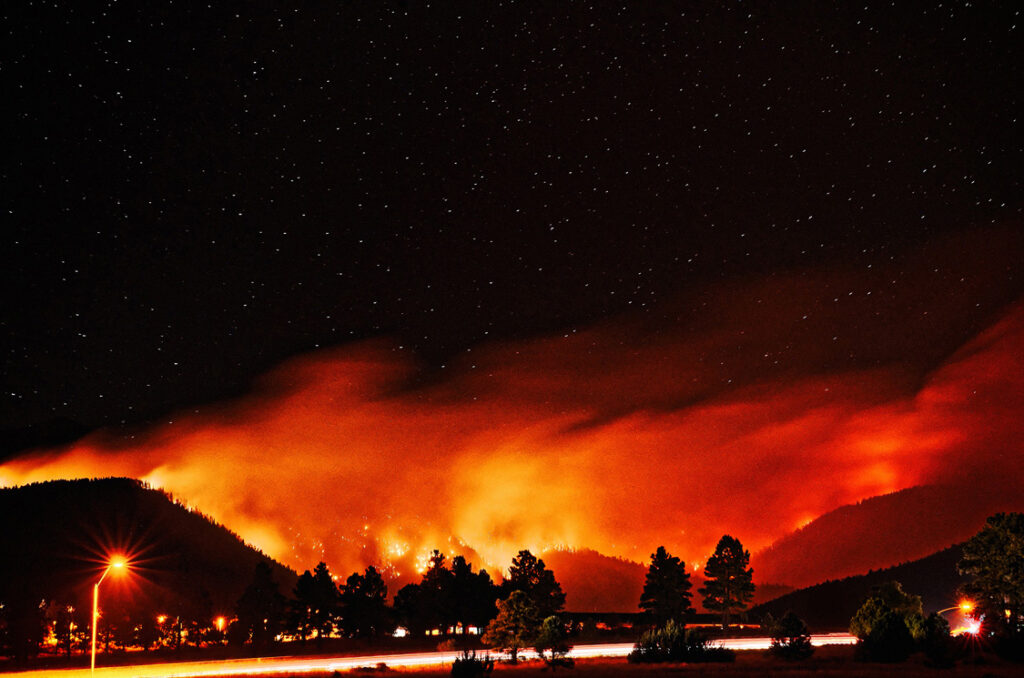 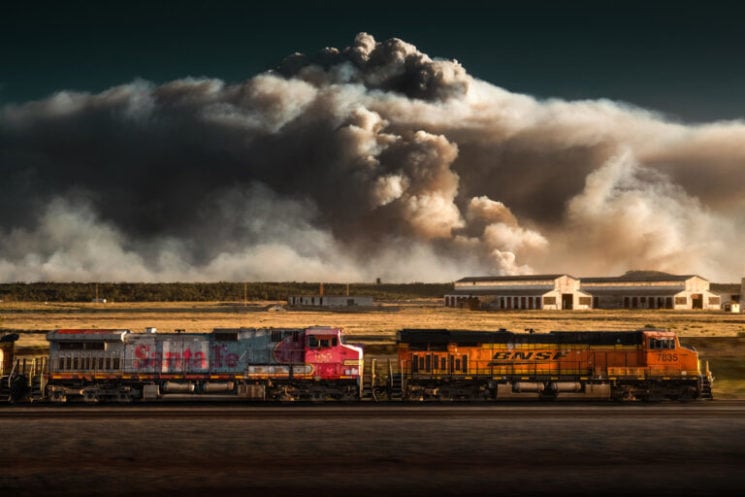 It was a quiet evening with a brilliant red sunset visible through the tall pines of Flagstaff, Arizona. I was sitting with my neighbor in my front yard, each of us enjoying an Old Fashioned and toasting to another hot summer day. As the sun passed below the horizon line, and night set in, we noticed some smoke to the south that had more form and definition than what we were used to. I brushed it off as another controlled burn and retired to my house for the evening. After getting my daughter to bed, I took to washing the dishes, including the glass I had just had my cocktail from. To my surprise, there were ashes in it, a sign of things to come.

The next day I was doing a preproduction Zoom call with a client when my phone starting vibrating like crazy. I had a glance at it, only to see an emergency alert instructing me to “begin preparing for evacuation.” The smoke from the previous night was not a controlled burn, but rather a wildfire headed towards our house. I promptly excused myself from my own preproduction meeting to the well wishes of my client and proceeded to walk upstairs. My wife was writing on a chalkboard on the kitchen wall a list of things that must not be forgotten. 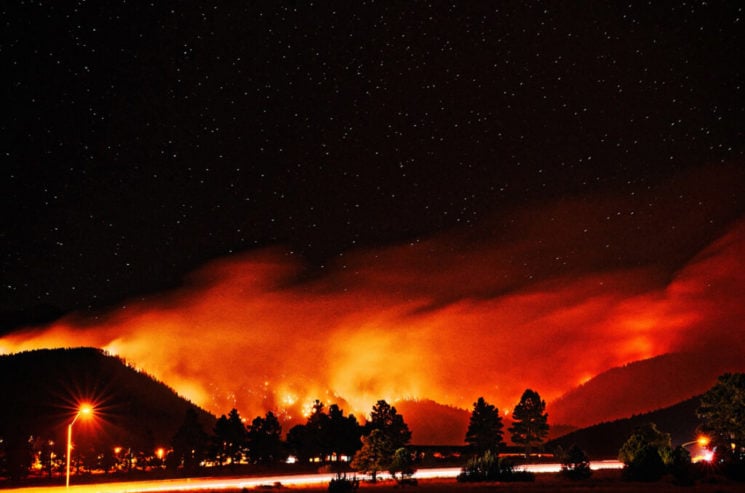 Having been around a wildfire a few years before, we had gone through the mental exercises of “what would we take.” However, we were never in harms way, and I even found it as an opportunity to take some pictures. The same could not be said about this time. To see if I should be genuinely concerned about the situation at hand, I texted a friend that is a local firefighter with my address and a simple note that said “what is the reality for my neighborhood,” only to receive a two word response:

This dire predicament was reinforced only minutes later when I stepped outside to start packing one of the cars, and the air burned. The brush and trees that the wildfire was burning through produced an oil in the air that felt like a sunburn on your skin within only a couple minutes of exposure. Add to this that the ash, that was in my prior night’s cocktail glass, was now the sized of quarters and looked as though it were snowing in the middle of summer.

I was scared, genuinely scared. As with many of my high stress photoshoots, I compartmentalized the worry away and focused on what evacuating my family looked like. I also made myself a promise that I would go out and photograph the fire once we were all safe. It was a way of keeping my mind positive and looking forward to something I enjoyed, rather than locking up from the fear.

From family heirlooms to important documents, RAW files to personal servers, one by one they were loaded into the cars. I made the decision to backup my computers to hard drives with the intention to leave the computers to burn. My reasoning was that hard drives take up less space in the car, and at this point, space was everything. The only cameras that I packed were ones with sentimental value, rather than work utility. I viewed the situation as one where gear can be replaced, but passing down my first camera to my daughter is more important than any price tag one could put on that camera.

A couple hours in to the crises, my wife and I had loaded all the things on her list into the cars. We were ready for the evacuation order, and the designated route that we were supposed to take to leave town. In a funny bit of ironic timing, this was also the day that Canon had set up a video call with me to invite me to become an Explorer of Light. I actually did the call outside.

“Hey guys, I am very honored and will provide you an address for the contract once I know where I will be living in a week,” I said on the call

Yes, it was a surreal day.

Each hour we would look at the news updates, and they seemed to grow more and more bleak. With so many wildfires burning this summer, the hotshot teams and slurry bombers needed to suppress the fires were spread thin. It would be days until they could make it to the fire that was threatening our house. However, I still kept that hope of photographing the fire, and even started to go through mental exercises of how I would photograph it once we were safe. I wanted to not only show the situation, but tell the story. My daughter is still at an age where she probably will not remember this event, so I felt I owed it to her to capture an image for her to look at when she is older.

Our town (Flagstaff) has always been a train town, with the transcontinental railroad running through it since 1882.  While waiting for status updates from the fire department, I would look at Apple Maps (which at this point was now displaying the fire) and see where angles existed to photograph a train with the fire in the background. I was mentally ready, all I needed was for my house to be saved, good light… and a train.

As fate would have it, one week into the nightmare, we got the news that the Type 1 firefighters (also known as hotshots) were arriving, and that the airplanes would be dropping fire retardant around our area. While the smoke actually got worse for a couple days, the safety that we had been hoping for had now arrived. In a bit of symmetry, I had a cocktail with my neighbor to celebrate our houses being saved, but had to do so inside as it is not fun to have an Old Fashioned while one’s eyes and lungs are burning from the air, no matter what bourbon you choose to make it with.

The next day I set out to photograph the shot that had existed in my mind. However, the weather was not in my favor, as winds blew towards the tracks. Even with an N95 mask, I was not able to be at the location long enough for a train to pass by with good light. This same situation happened the next three days, two of which I drove out the location, and the other I chose not to leave the house. On the fifth day, I received a text from the firefighter that I had spoken to the week prior. He said that they had massive burn operations going on that day, and that there was a chance these burns would result in a pyrocumulonimbus cloud.

At this point you are probably saying, “what the hell is a pyrocumulonimbus cloud?” No worries, as I hadn’t a clue what they were or that they even existed (and probably slept better not knowing this).

A pyrocumulonimbus cloud is when a large fire creates so much heat that the resulting smoke cloud makes its own weather system… complete with lighting and all. Scary right?

With a stroke of good luck, the fire and its resulting weather system deadened the wind enough for me to go to the location long enough to wait for a train. I had practiced how I would photograph the train, down to swinging my mask around the back of my neck, so my camera movement was level. Finally, the train that I had waited a week for arrived, and I shot three images as it sped by. While I would normally have a quick look to see what existed in the camera, I immediately shut the camera off and walked to the car. I was confident I had the shot, and with my eyes burning, figured it would be best to call it a day.

This is the image:

The 2021 Rafael Wildfire in Flagstaff, AZ.

It wasn’t long after seeing this photograph at home that I began to think back to the phone call I had with Canon the week prior. Before having to wrap it up, we discussed how this sponsorship could work, and the access to benefits I would have as an ambassador to their company. From the beginning, I have wanted my role there to benefit others more than myself, and I felt this chaotic situation was an opportunity. I called Canon and told them that my house had been saved, and that I created an image of the fire that nearly took it. I asked if they (Canon) could have someone in their printer division make prints that I could give out to some of the fire stations that were responsible for fighting the fire around us. We decided on ten prints, eight for the fire teams, one for the mayor of the town and one for my wall.

This was until last week.

I received word that a kind lady, a good friend to many in the photography industry, is going through a difficult health situation. Her name is Kara Leach, and while I have never met her, those I know close to her talk about how incredible a human being she is. The photo community is family to me. It was no surprise when I saw friends and fellow ambassadors donating prints to help pay for Kara’s medical treatment. After all, we are brothers and sisters no matter the gear we use, or what we photograph. It is for this reason that I have decided to take my print from those that Canon made and donate it to Kara. If you would like to go purchase it, you can follow the link here. Also, check out some of the other great images that photographers are offering to help one of our own.

Blair Bunting is an advertising photographer from Los Angeles. He has won numerous awards and worked with clients such as Discovery Channel, Pepsi, Disney, Adidas, Nikon, to name a few. If you would like to see more of his work, visit his website, read his blog, follow him on Instagram and Twitter, and like his Facebook page. This article was also published here and shared with permission.