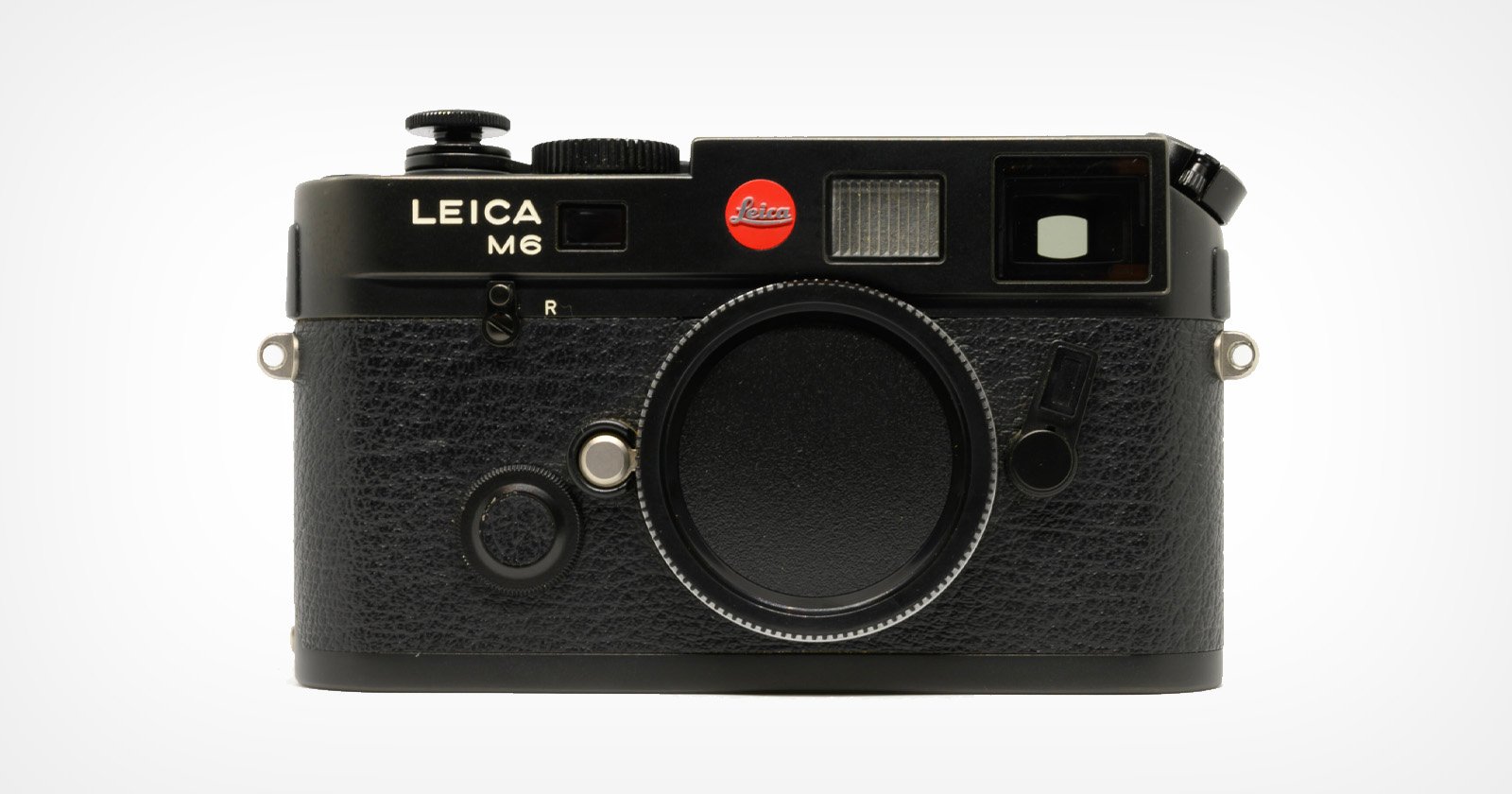 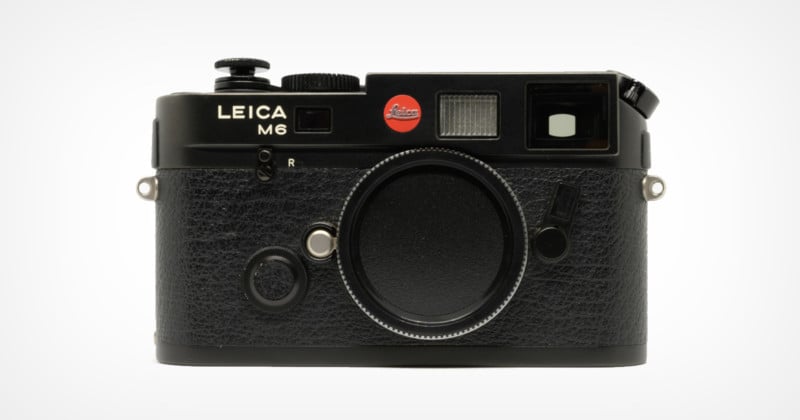 Previously, we explored topics like which Micro Four Thirds system held up better over time, which line of Sony’s full-frame mirrorless cameras is most popular, or which DSLR system held more of its value. This month, let’s look at which Leica M-mount film gear is the fastest-moving off the shelves.

This story is part of KEH’s Tilt-Shift Report, where the company shares exclusive data and unique insights into the latest trends in camera gear buying, trading, and selling.

There is a little context I need to give around the storied Leica M-mount. Basically, it was introduced in 1954 with the launch of the Leica M3, replacing the M39 screw-mount for a favorable new bayonet design that made switching faster, while locking in the lens to the body more precisely and securely.

“M” stands for messsucher, or “rangefinder” in German, and it’s a design still in use with digital Leica-M cameras today. The rangefinder has indeed proved to be an enduring form, as many photojournalists, documentary and street photographers favor it for its simplicity, size, reliability, and quick operation.

The original M3 sold around 220,000 units before production ended in 1966, making it Leica’s most popular rangefinder ever, and it led the way for a long lineage of M-mount bodies, all notable.

While prices are steep, Leica is still producing film cameras to this day — the MP and M-A — but has largely shifted to manufacturing digital M-bodies since its first foray with the M8 in 2006.

Although a new, cheaper film body is rumored to be released in 2021, the most sensible way to get into the Leica M-mount rangefinder system is still to buy used models from yesteryear.

Of course, Leica isn’t the only manufacturer who makes M-mount gear — Voigtlander, Zeiss, Rollei, Konica, and Minolta, amongst others — have made both M-mount bodies and lenses through the years, and then there are newcomers like 7artisans or TTArtisan who recently started offering a bevy of excellent, moderately-priced M-mount glass as well.

With nearly 70 years-worth of gear, the M-mount has had plenty of time to grow, evolve, and cement itself as one of the most sought-after systems on the market.

Because we sell more M-mount gear than just about anyone, we know how tough it is to keep certain items in stock. Let’s look at which bodies and lenses have the shortest shelf-life in our warehouse—if you’re eyeing this gear for your own collection, you better be able to pull the trigger quick once you spot it on the site.

For M-mount bodies, it’s no surprise as to who takes our number one spot. 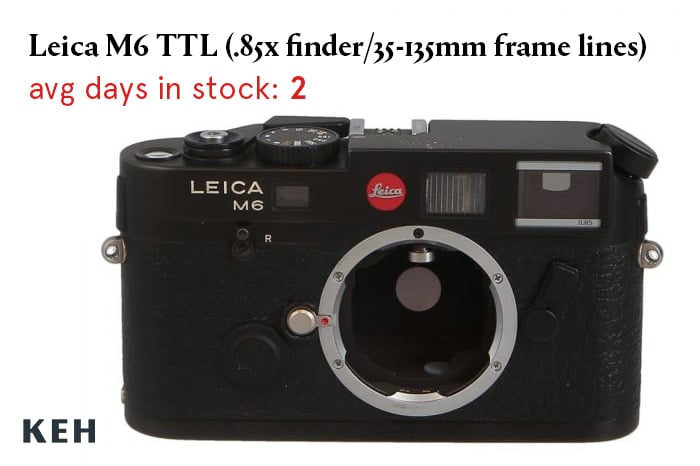 The Leica M6 is all over our chart. On our list of the top-20 fastest-selling M-mount bodies, the M6 takes up nine spots, as a matter of fact.

Not far behind that cluster of M6 bodies though, is another popular option—the Voigtlander Bessa R2A. The aperture-priority R2A usually sells within three days of hitting our site, while the all-manual R4M and R3M take about four days.

Another notable non-Leica M-mount body is the Zeiss Ikon, which sells on average within four-and-a-half days of hitting our shelves.

Other Leica bodies on the list are the aforementioned MP, which usually moves within a week, and the O.G. M3 double-stroke, selling on average at the slower pace of eleven-and-a-half days.

At two weeks apiece, the Leica Minolta CL sells just as fast as the identical Leica CL, while the Minolta CLE takes three days longer. Branding, it turns out, does make a little difference, and the Leica name still pulls some weight.

As far as lenses, there are a few classics tied for the number one spot. 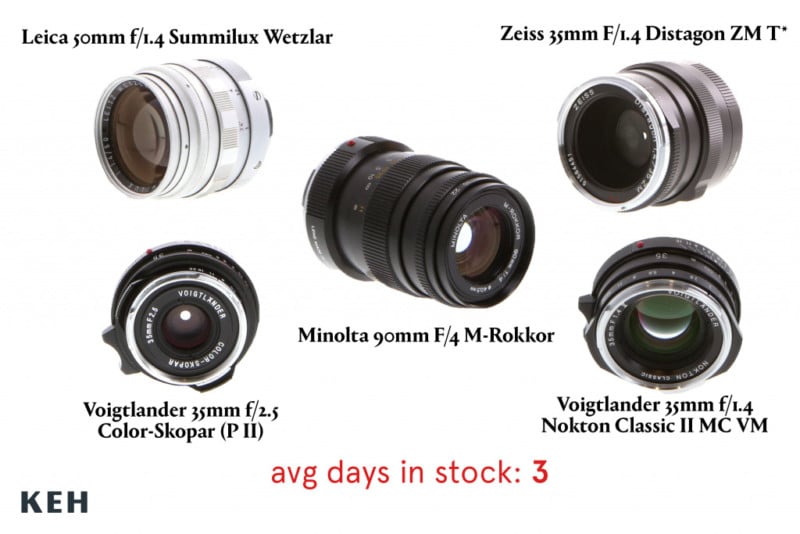 It’s easy to see the appeal of this cluster of lenses at the top spot, and why they’re all gone within three days of going live on our site. The Leica 50mm f/1.4 Summilux Wetzlar is a classic from the 1960s, perhaps the quintessential vintage lens for use on an M3 or M2 body. Being that it’s an older M-mount lens, it’s more affordable than later versions, while still delivering loads of character and Leica charm.

Then there are three 35mm lenses that run the gamut from small and affordable to fast and durable. The Voigtlander 35mm f/2.5 Color-Skopar (P II) is basically a pancake lens, perfect for those who value a low profile while making no sacrifices on image quality. For those wanting a brighter aperture, the Voigtlander 35mm f/1.4 Nokton Classic II MC VM fits the bill, while still maintaining a low profile. Finally, the Zeiss 35mm f/1.4 Distagon ZM T* is prized for its sophisticated design as well as its top-notch construction.

Closing out the bunch at the top spot, selling within 3 days, the Minolta 90mm f/4 M-Rokkor might be a surprising result, but considering its low price and excellent quality, it makes all the sense in the world for it to be a fast-seller. It can be had for just $200-300 depending on condition, so it’s a natural pick to round out an M-mount kit on the short telephoto end.

Another classic not far behind the leading pack, is the Leica 35mm f/2 Summicron-M, 6-bit which usually sells within 4 days of arriving in stock. A fine, affordable copy of that design, the 7Artisans 35mm f/2, sells almost as fast, within seven days.

The item which wins the distinction of “slowest-moving, fastest-aperture lens” on our list is the mighty Leica 50mm f/1.0 Noctilux, which because of its complexity, size, exorbitant price point, and limited audience, averages just over 10 weeks in stock before finding a happy new owner.

What’s clear from this data is that M-mount gear is still highly desirable, and because of its growing scarcity — especially for mint vintage pieces — it probably won’t lose its luster for quite some time.

About the author: Luca Eandi is a Brooklyn-based street photographer, creative director for KEH Camera, and a board-certified human person. He recently published “Signs of Japan,” a long-term photography project documenting illustrated Japanese street signs in the Tokyo area. He posts his daily street photography work on his Instagram profile.

This article was also published here.

Creating food footage with a 360 spinner
How to Reverse Image Search on iPhone
5 MUST-KNOW Photoshop Retouching Tips and Tricks for Photographers – Photoshop Tutorial
What is Infinity Focus in Photography?
Heartbreaking Images from the Huge Earthquake in Turkey and Syria